A slow-burning adventure in the snow

Richard & Alice is, ostensibly, an adventure game. It’s simply presented, short, indie fare made created by the two-man team of former games journalist Ashton Raze and Lewis Denby. Underneath its brevity and simplicity, however, is a story that has left me rather distressed.

Upon finishing it, a feat that only took a couple of hours, I gushed at the nearest person about feelings and lots of other things that I keep bottled up because I’m a gruff man who doesn’t like to cry. They didn’t really care, though, because they were watching the news.

So here I am, wanting to tell you the same things, but I can’t, because that would render the experience of playing it for yourself somewhat pointless, or at least less satisfying. Such is the horror of reviewing a title with exceedingly simple mechanics but a wonderful narrative. 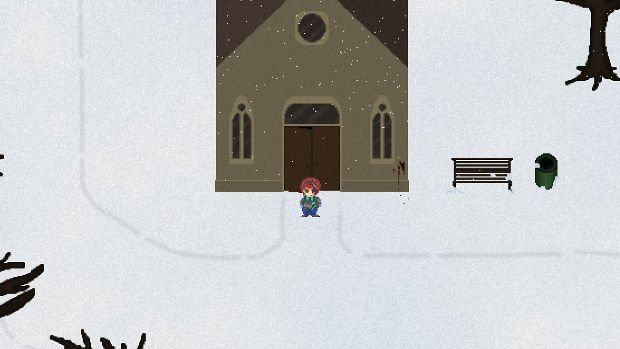 Richard and Alice are prisoners, incarcerated in an underground emergency facility. It could be worse; they could be on the surface, fighting for survival amid the snow and freezing temperatures that have turned much of the world into a desolate, desperate place. Elsewhere, other nations have become barren, unbearably hot deserts — Earth’s not doing so well.

Alice is a new inmate, locked up for murder, while Richard has been in the prison for some time, a deserter from the armed forces. The pair have little in common, with Richard being a positive and chatty fellow, while Alice struggles with depression and deflects with cutting sarcasm.

With nobody else around, other prisoners mentioned but nowhere to be seen, the two strangers spend their days chatting, getting to know each other, and sharing their past. Both are parents, guilty, and have been through a lot, and it is via their discussions that we learn more about the state of the world, their incarcerators, and how they got to this point. 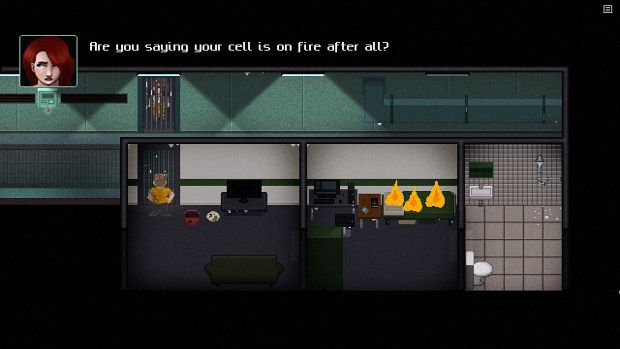 In the jail itself, Richard is controlled. His cell is actually quite luxurious, split into three rooms and containing a shower, TV, and even a computer — which he frequently submits tickets to the prison staff on when things go wrong. There’s not much to do in this prison, apparently, so gameplay here is extremely limited. Most of it is taken up by Richard and Alice developing a rapport, revealing the breakdown of government, the safe zones where residents are lied to about the dangers that lie outside, and the generally awful state of the world.

Alice starts to open up to her new “friend,” and as she tells him how she got here, and how she became a murderer. Players live through this experience in flashbacks where they control Alice on the snow-covered post-apocalyptic surface.

Her sole focus in these flashbacks is looking after her precocious five-year-old son, or, as he frequently reminds her, five-and-a-half-year-old son, Barney. He is a glimmer of hope in the otherwise bleak game, viewing everything as an opportunity for excitement and gleeful adventures. Beyond the occasional joke shared between Richard and Alice in the present, he is the only source of levity.

As the mother and son duo attempt to survive under the most extreme conditions, they encounter all sorts of horrors, all perpetrated by men that are never seen. The poor art does these moments a great disservice, and they undermine the grotesque nature of the things they witness, but the writing remains consistently excellent and manages to convey everything that the art does not.

There are no real antagonists or villains here, just survivors driven to do horrific things. Alice makes judgement calls about the horrors she witnesses as well as those who committed them, but at several points alternative outlooks are suggested. Ugly, pragmatic outlooks, but in a frozen post-apocalyptic world, surviving requires terrible sacrifices. 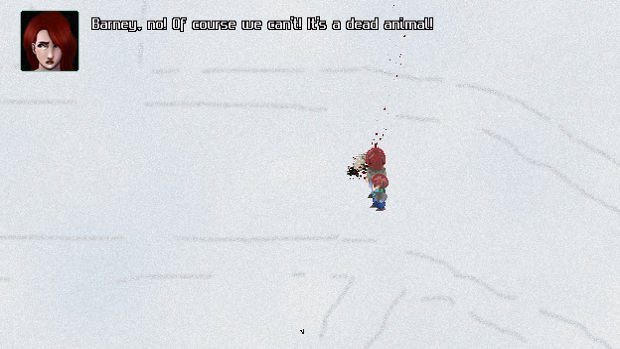 Most of the puzzles exist in these flashbacks, and they tend to be logical, but entirely too convenient. The narrative is undoubtedly challenging, but the gameplay is the complete opposite. With so few interactive items, a small inventory mostly taken up with notes scrawled by other survivors, and puzzles that rarely span more than one area, there isn’t really much to do. Solving a puzzle, on the other hand, is usually satisfying, not because it was tricky, but because the result is the story moving along.

There is a lot of text to get through, but Richard & Alice is a well-paced adventure. Dialogue-heavy moments between the titular characters are broken up by Richard, under player control, interacting with his room, emailing the prison staff, attempting to fix the AC, all the time still chatting to Alice, and then there are the flashbacks which are evenly paced throughout.

Despite being a short tale, there are multiple endings and subtle, easy-to-miss pieces of information that make Richard & Alice worth at least a second playthrough, something I just did this afternoon. It isn’t required, however, as this is a complete story, and all the endings have something to offer both in terms of the closure they provide and their emotional weight.

Uninspired puzzles and weak art might put some folk off, but they’d be missing out on a thoughtful, slow-burning tale that opens up into something poignant, even though it never stops being bleak.