Rhythm Thief and the Emperor’s Treasure is one of the most unusual games I’ve played this year. There is not much about it that follows any sort of familiar trajectory.

It’s a story driven, rhythm-action RPG set in Paris. The main character is a skinny teenage burglar who doesn’t care about money. He’s a lot more interested in foiling the plans of the reincarnation of Napoleon Bonaparte and putting down his Putty-like foot soldiers with one-hit knockout punches.

While the game is packed with lavish 2D/3D cut scenes, the occasionally voiced dialogue doesn’t always match the language of the corresponding subtitles. Every once in a while, the actors will say a phrase in French, but the subtitles will be in English, and vice versa. Maybe that was done intentionally? With a game this weird, it’s hard to know where the “bugs” start and the “features” begin.

This is a title that sets out to do something unexpected, and the ways that it fails (and succeeds) to meet its goals make it even more surprising. The end result is a game that is consistently interesting, even when it fails. 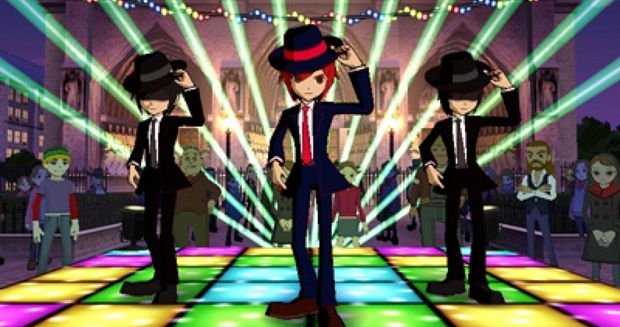 The central narrative themes of Rhythm Thief revolve around french children who act like adults and their parents who act like … bad parents. One of them — the primary playable character — leads a double life where he steals fine art from the Louvre and loves to dance. His love interest is an orphan who plays the violin and might have a magical soul that can cause miracles. Secondary characters include a French police force that favors the use of roller blades over firearms, a prepubescent private eye who uses a soccer ball as their primary crime fighting tool, and a dog named Fondue.

The game exists in a special place between the outright ridiculousness of Rhythm Heaven and the pseudo-realistic world of something like Yakuza. If you’ve been waiting for Sega to return to that special brand of weirdness that they seemed to revel in back in the Dreamcast days — a weirdness exemplified by games like Jet Set Radio, Space Channel 5, and Crazy Taxi — then you’re in luck. Rhythm Thief and the Emperor’s Treasure if the most Dreamcast-feeling game that Sega has published in years. 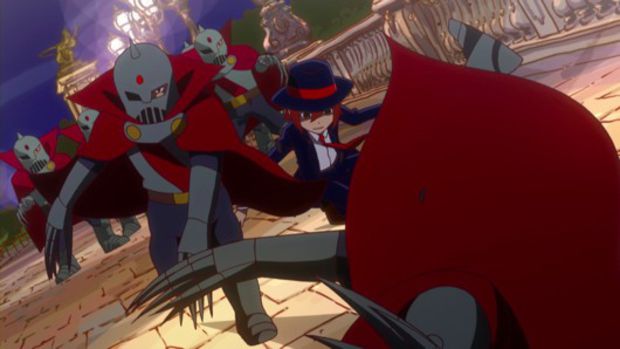 In terms of structure, the game feels more like Professor Layton than anything else, but with sound-based challenges instead of logic-focused puzzles. Everything in this game is linked to the audio, be it melodic, rhythmic, or ambient sounds. Fifty typically rhythm-action “levels” make up the meat of the game. These levels are interspersed throughout the narrative. A few of them (like the Samba de Amigo and Space Channel 5-inspired levels) are entirely optional, and have to be unlocked by talking to NPCs or through other methods.

Speaking of NPCs, some of them will stand in your way as you attempt to move the story forward. To get by them, you may have to solve a musical riddle. The riddle might require you to collect a sound from somewhere else in the game and play it back to a specific person or thing. If a lady with a crying baby won’t let you pass because she’s got to sooth her brood before she’ll stop blocking foot traffic, then finding the sound of a baby rattle and playing it for her may be the solution to everyone’s problems. Though the game is pretty transparent in its efforts to shoehorn the player into seeking out various sounds throughout the game, that doesn’t make it any less fun. 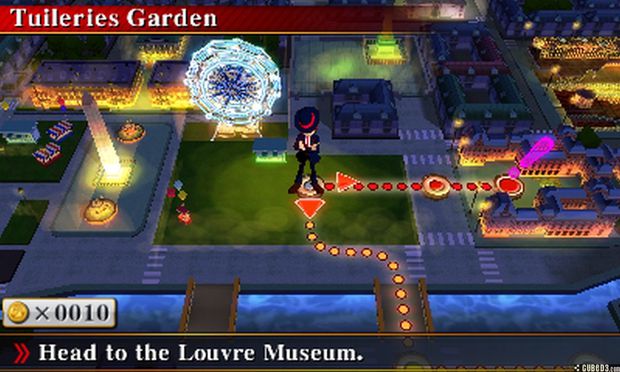 Ironically, the game’s simple exploration and investigation system is one of its most compelling aspects. That’s not what I expected from a game called Rhythm Thief. Traversing the streets of Paris is a cinch thanks to the overworld map which lays out the city in a Pac-Man-style maze, and all you need to do to find hidden treasure is poke around on the bottom screen. Parts of the game can take simplicity to the point of mindlessness, but that simplicity makes the act of exploration so effortless that it becomes compelling in its own right.

There are medals (used to buy status-enhancing items and cut scene replays) and other bonuses, hidden on nearly every screen of the game, and searching for them is way more fun than it should be. I spent just as much time roaming around Paris looking for secret unlockables as I did with the actual “rhythm” game parts of this rhythm game.

That’s largely because the rhythm games here are quite uneven in both quality and difficulty. All of the music is well composed, though a fair amount of these songs are forgettable. The gameplay itself doesn’t fair quite as well. Most of the levels are clever and fit well with the game’s ludicrous storyline, but many of them are so easy that you’ll only ever have to play through them once.

On the other hand, when a level is suddenly difficult, it’s usual very hard and very annoying. One stage about dogs eating bread immediately comes to mind. The stage is pretty simple, but both the visual and auditory cues are far too ambiguous, so it’s really hard to feel exactly when you’re supposed to hit the buttons. Other stages are only difficult because they involve touch-screen controls or motion controls which add an unwanted layer of ambiguity to the experience. This adds up to a game that too often feels unfairly challenging.

Now don’t get me wrong, I love difficult rhythm games. I’ll replay the same stage in Rhythm Heaven Fever or Bit.Trip CORE for hours trying to get a perfect score. I love playing Ouendan/Elite Beat Agents on the highest difficulties, even if it means losing a stage in the first three seconds.

These games are hard, but they’re always fair, which makes the challenge feel real. That’s because the input delivery in these titles is always instantaneous, and they always tell you exactly what you need to do in order to survive. When you fail, it’s never the game’s fault; it’s your fault, which gives the player hope that next time, they may be able to succeed.

That’s not the case in the worst of Rhythm Thief‘s stages. Though some of the game’s touch-screen-controlled levels do a great job of telling you exactly what to do — specifically, the violin stages are fantastic — most of them make it hard to know exactly where you have to be in a swipe of the stylus in order to stay on beat. The very first stage of the game (which features an awesome Sly and the Family Stone sound-a-like anthem) actually has the audacity to ask you to actually draw circles on beat. How big those circles have to be and if you have to start or end the circle on the beat are things you can only learn from trial and error. 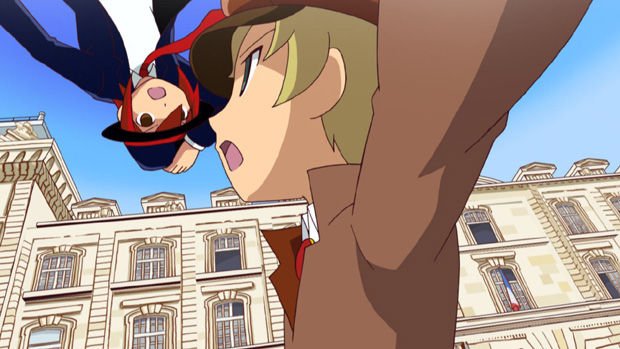 It gets worse when motion-controlled levels start leaking in. Being asked to move the entire 3DS system to the beat is just a terrible idea. Moving the console while playing obscures your vision of the screen, and it’s impossible to know without practice exactly how you have to move the console to properly register the input. These are issues you just shouldn’t have to wrestle in a rhythm game — a genre that’s built on connecting the player to both the game’s sights and sounds in the most direct ways possible. To be clear, these issues only came up in a handful of the game’s stages, but the stages where these problems didn’t play a part were so easy that I only played them once.

Rhythm Thief‘s characters, world, and opportunities for simplistic exploration are the aspects of the game that I enjoyed the most. The whole experience was over in about nine hours, and many of those hours were spent breezing through the streets of Paris, searching for secrets and discovering new things.

By the end of the game, I truly felt attached to the characters and was excited to see what would happen next. The rhythm games here are too hit and miss to recommend on their merits alone, but if you’ve been waiting for Sega to return to its Dreamcast roots, then grab Rhythm Thief and the Emperor’s Treasure before it disappears.