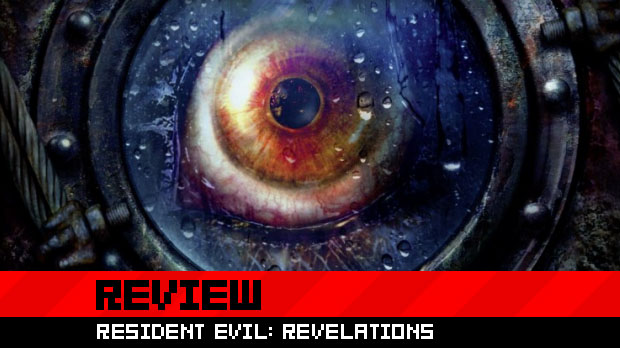 While Resident Evil 4 is considered one of the best made games of all time, shifting the series from survival horror to combat-focused action left some fans with a vast, empty chasm in their hearts. The modern Resident Evil is tense, fast-paced, and exhilarating, but it’s not horror.

Resident Evil: Revelations is not a committed return to the survival roots of Capcom’s PlayStation titles. However, it is most certainly a compromise, an effort to bridge a gap between the strenuous horror-oriented titles of yesteryear with the many contemporary conveniences gamers expect today.

While at times the marriage between old and new presents a conflict, the experiment seems to have been an overall success. 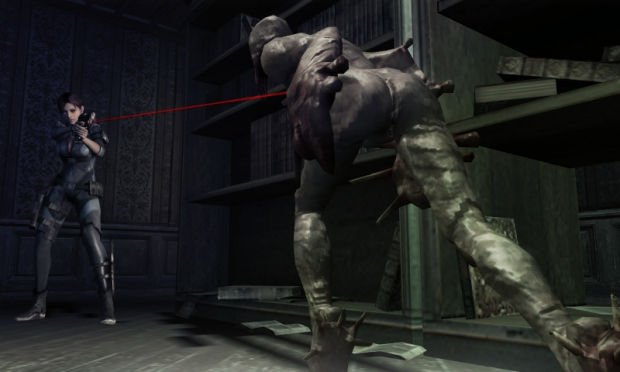 Revelations takes place between Resident Evil 4 and Resident Evil 5. Jill Valentine and her partner, Parker Luciani, travel to the Queen Zenobia cruise ship in order to investigate a returning bio-terrorist threat, Veltro. Naturally, Jill and Parker get trapped on the ship and soon find themselves surrounded by some of the slimiest bio organic weapons that Resident Evil‘s nasty world has to offer.

While much of the game is spent playing as Jill, the game shifts perspectives at regular intervals to include other characters, including Chris Redfield. The alternate viewpoints paint a fairly interesting conspiracy plot that, while quite straightforward, is blessedly less convoluted and anime-esque than more recent Resident Evil stories have been.

Capcom’s latest 3DS effort attempts a unique blend of Resident Evil 4 combat and the restricted, oppressive sensibilities of venerable survival horror games. Valentine moves and fights as Leon and Chris do in their prior console outings, but enemies are aggressive bullet sponges and ammunition isn’t exactly falling from the ceiling. In several situations, it becomes more prudent to flee than to fight, a choice that most games don’t inflict on players anymore.

Should our brave heroes stop and fight, they’ll need to hold the R-button to switch camera from third-person to first-person. Jill and friends won’t run in this perspective, but they’ll be able to use the analog nub to freely aim anywhere on an enemy’s body and can slowly move with the L button depressed. Though opponents are rarely found in large numbers and tend to move slowly, their erratic movements and ability to soak up damage can make them tough targets. More often than not, encounters with even weak enemies will push players back as they retreat several yards, shoot, and retreat some more. It’s a solid system, only held back by the slow enemy death animations — it can often be hard to tell when a monster’s been killed, and a few extra bullets are regularly wasted on creatures that are more dead than their appearance indicates.

While mobile, the multiple protagonists will be able to dodge incoming attacks by timing a push of the analog nub a moment before impact. While the dodge is essential in some scenarios, I found its implementation far from intuitive. Not to mention, the enemies move so spasmodically that nailing the timing for the dodge is quite frustrating. Still, when it does work (which can frequently be due to sheer accident), it’s quite satisfying. Each character also gets a relatively useless melee weapon, and access to a variety of grenades which prove themselves essential in boss fights. Every gun can be modded with custom parts found hidden throughout the levels, bestowing extra damage, double-shots, and more exotic properties upon one’s favorite armaments.

New to the series is Genesis, a gadget that players will be relying on quite a lot. Genesis is operated like a weapon, but it should be rather familiar to those who have played the Metroid Prime series. Essentially an environmental scanner, Genesis can pull information from targets littered around the environments. Hidden items can be detected, and biological material from enemies can be scanned in order to earn free green herbs. While at first it seems like an unnecessary waste of time to constantly stop and scan for hidden trinkets, using the Genesis and hunting for secrets becomes a strangely enjoyable experience, and a cathartic break from the rigors of combat. 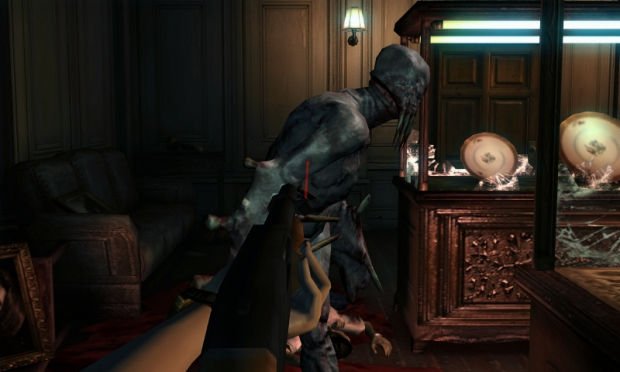 Revelations impressively excels at balancing the stress of survival horror with the playability of modern gaming. Ammo is indeed scarce, but Capcom was able to provide the perfect minimum to keep it fair. There are enough tools to keep players alive, but not enough to casually waste. Every enemy dispatched feels like it was put down at a cost, and every healing green herb is a precious commodity. The boss fights are particularly trying, with a number of memorable, lengthy, and resource-destroying encounters.

It’s a rare thing to be able to say a game is exasperating and mean it positively, but that is most certainly the case with Revelations. Despite monsters being slow and the theater of combat small, the stress levels are on par with anything found in console Resident Evils or the Dead Space series.

Although much of Revelations is a success, there are times when the seams joining its two sensibilities start to fray. This is especially evident in combat-heavy levels, where the wild forklift-turns of characters and sluggish animations essentially give the enemies a number of free attacks. In these instances, the genres of action and survival horror appear to contradict one another, as players are expected to stay and fight, but feel undermined and ill-equipped to do so. For most of the game, this isn’t an issue, but in a number of tough, enemy-laden areas, it can be frustrating in a less than enjoyable way.

Controls are understandably unconventional on the 3DS, but they’re not hard to get used to. Those who obtain a Circle Pad Pro will be able to take advantage of it (though one wasn’t provided for testing) and there are a number of control options, so everybody should find something that works. I found the default scheme a little awkward at first, but soon preferred it. Just be warned that one’s fingers are due a good cramping with extended play. 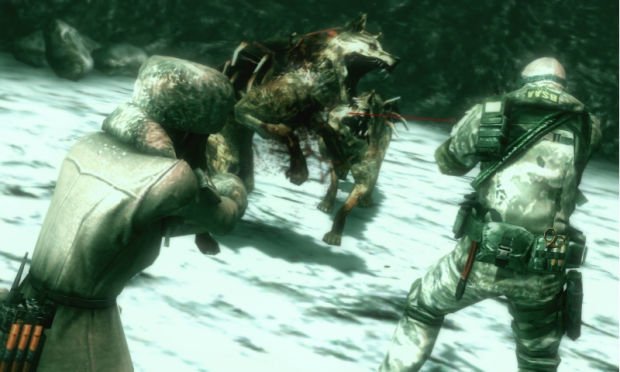 In addition to the campaign, which will take players anywhere between six and eight hours, there is a full-fledged co-op mode known as Raid. Raid takes the form of appropriated scenarios from the main game, and can be played locally or online with another player. Interaction between the two characters is limited at best, but having another human at one’s back makes the combat situations far more engaging and less infuriating. Raid levels are fast, thrilling, and a surprisingly fun addition to the game. There’s also a leveling system, with new characters, weapons and mods that can be unlocked, so Raid mode has quite a bit of longevity to it.

Raid is almost good enough to be its own game, and could well have been if it were a little more fleshed out. As a mode within Revelations, it’s a significant draw that’s not to be ignored and ought to keep players returning after they’ve played through the story. Coming from someone who never really got into the Mercenaries mode of other Resident Evil games, I can say that Raid is a fantastic new addition to the series.

Despite being a 3DS title, Capcom didn’t skimp on production. The adventure is fully voiced, with a suitably dingy soundtrack and squelchy effects to keep the atmosphere nice and miserable. Visuals are quite splendid for a 3DS game, and the 3D effect gives it just enough “pop” to create believable environments. Gimmicky, “in your face” 3D animations have thankfully been kept to a bare minimum, so the effect is subtly complimentary, rather than forced or gimmicky. Gamers looking for an audio-visual treat on their Nintendo systems will get what they paid for here. 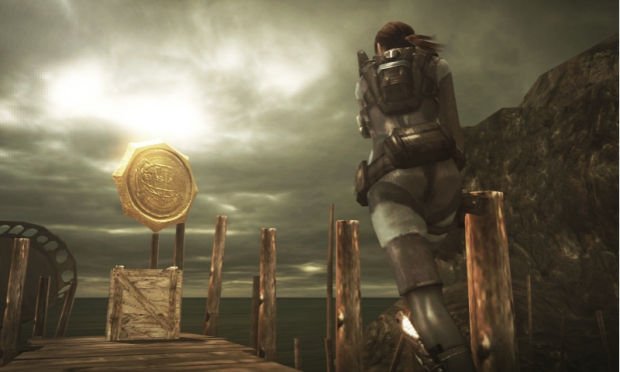 Resident Evil: Revelations is an exhausting game. It’s the type of game that demands cigarette breaks between levels, due to how strenuous it can be. It lacks the outright scares of its survival horror influences, but the consistently bleak atmosphere and exigent combat situations make for a game that will drain one’s brain in a disconcertingly enjoyable way. Every challenge feels like it might be too much, and every step forward is another step closer to some horrendous, taxing endeavor, but that’s what ends up being so much fun.

Revelations proves that, while traditional survival horror isn’t due a comeback anytime soon, there are certainly compromises that games can make in order to get a fresh taste of that old, beautifully soul-destroying flavor.