Any port in a storm

Resident Evil Revelations was a great action horror title. So good, it absolutely humiliated Resident Evil 6 by being superior in every single way — a fact made especially delicious considering it was a 3DS game in contrast with its big-budget console counterpart.

Capcom, ever ready to exploit an opportunity for a port, seems to recognize that Revelations was the better game and is hoping to pump some more cash out of the project by bringing it to home consoles. As well as a new lick of HD paint, this fresh take on the adventure boasts some extra content and an expanded Raid mode.

It was well worth Capcom’s time to make, but whether it’s worth purchasing depends entirely on whether or not you’ve played it on 3DS already. 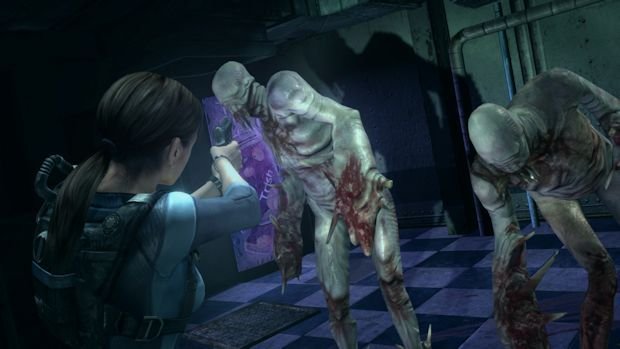 The console version of Resident Evil Revelations remains largely the same as its portable predecessor. In a story that switches perspectives between Jill Valentine, Chris Redfield, and several support characters, most of the adventure takes place on a ship overrun by the new T-Abyss virus, a fresh strain of mutating mojo that is being used by the terrorist organization Veltro.

Designed as a compromise between modern action sensibilities and survival horror design, Revelations does a good job of giving players competent combat ability in restricted, tight spaces to create an atmosphere that remains threatening even while playing as heavily armed soldiers. On 3DS, I was always impressed by the balance between limiting players’ abilities and allowing enough ammo and resources to not keep them frustratingly underpowered — a balance that RE6 failed to maintain. This balance has been preserved in the re-release, even refined a little. 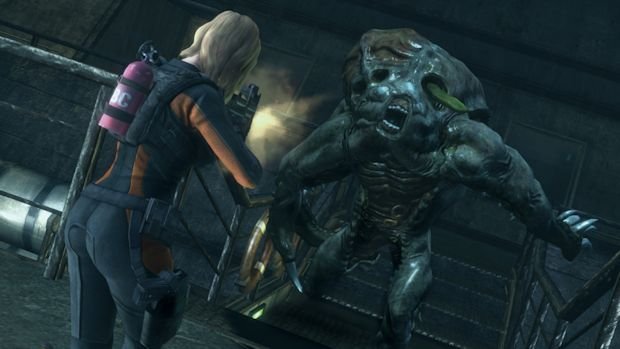 Unlike the 3DS version, Revelations now offers greater mobility in combat, with a familiar third-person shooter control scheme. Our protagonists get to move and fire, rather than be rooted to the spot, and the more intuitive control scheme means combat is fluidly integrated into play, with less of a “stop and start” structure. Characters feel easier to control as well, with no wild swings when turning and a simply superior analog stick compared to the nub of the 3DS.

While there are some benefits to playing Revelations on a console, it has to be said this was a game designed to work primarily on the 3DS, and this version’s dodgy aiming and wild camera controls make that all too apparent. There’s a subtle but noticeable unwieldiness when aiming or manipulating the camera, where it’s too quick to move but too slow to stop, leading to many instances where you’ll find your target reticule swaying too far off from the intended target.

It must also be said that what is impressive on a handheld is not necessarily impressive on a home console, where more refined and specialized alternatives exist. Capcom did a decent enough job of altering the game to fit a traditional controller, but it nonetheless feels a little awkward and simplified as compared to something like Resident Evil 4. On the 3DS, we expect compromises and can often be thrilled just by a handheld boasting a close approximation of a console experience, but on a console itself, an “approximation” is at best unnecessary. 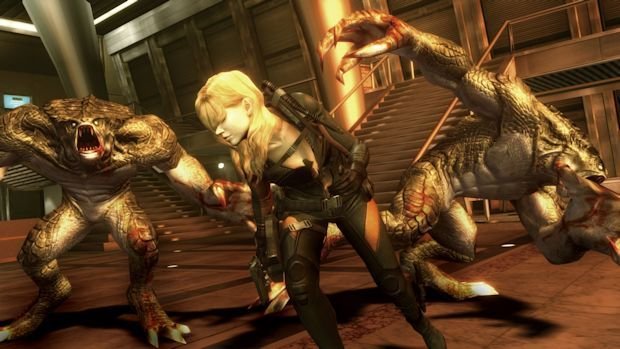 The same can be said of the graphics, too. Revelations on the 3DS looks terrific. Revelations on a Wii U or PlayStation 3 looks rudimentary in comparison to what is already on offer elsewhere. Upscaling the graphics has done the game’s visuals no actual harm, but simply existing on a system where standards are far higher does them an injustice. The result is a game that just looks unimpressive now that it has moved from a format where once its aesthetic could enthuse us.

The good news is that, if you don’t own a 3DS, I’d still absolutely recommend Revelations. As the best Resident Evil game released in years, it’s worth checking out for any series fans yet to give it a whirl. While the aiming and camera are a little awkward, it’s something that one does get used to, moving from an uncomfortable aggravation to a mild yet regular annoyance. The important thing to consider is that Revelations works on consoles. I may prefer the 3DS alternative, but this new release is far from unusable.

My recommendation is aided by the improved Raid mode, which has been given more weapons, unlockables, and characters for a richer experience that could almost be its own standalone product. I already greatly enjoyed the addition of Raid to the original game, and the new one has taken up a lot of my time. Playable both solo and with an online partner, Raid is all about blasting through short stages, collecting items and currency to unlock new weapons and upgrades. If you’re considering picking the game up, Raid must be a big part of what you’re after, as it’s totally where the bulk of the fun can be found. 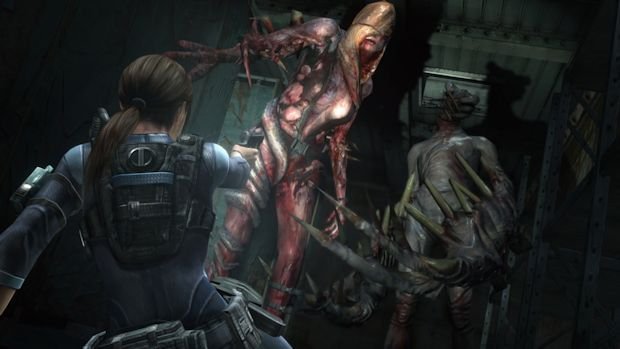 If you already own the original, there’s not too much to draw you into a second purchase. Raid is a good start, but outside of that, there’s a new Infernal difficulty that switches a few items around and a single new enemy in the Wall Blister. If you really, really enjoy Raid mode, then you’ll likely get your money’s worth, otherwise you’d be best off sticking to what you already have.

The Wii U version does boast a couple extra features over its contemporaries. The GamePad offers some touchscreen options (notably a few touchable icons for weapon switching) and a handy mini-map located on the screen. You can also play the whole thing remotely on the controller, if you’re the sort of person who gets off on that.

Miiverse has been integrated into the experience in two rather amusing ways. Whenever you die, you’ll have an option to notify the Miiverse community, and you’ll also see messages on-screen from those who died before you. The annoyance of death is mitigated somewhat by the entertainment of furious messages and hasty doodles by those with even less tolerance for failure than yourself. Miiverse is also used in Raid mode, where you can upload creature messages, which will spawn a monster named after you randomly into online games, complete with a pop-up featuring any phrase or image you devised. Naturally, the servers are already stalked by a monster called Sterling with a drawing of Willem Dafoe to show you. 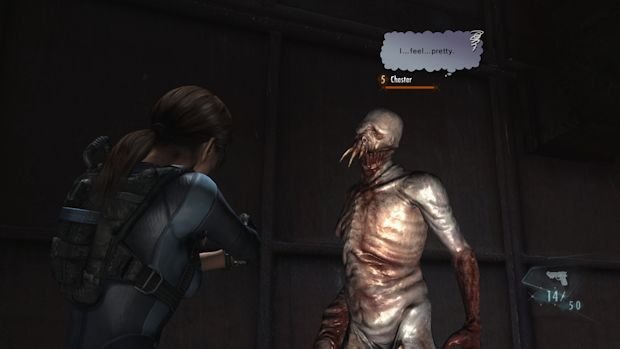 Resident Evil Revelations isn’t as good on consoles as it is on the 3DS. It clearly wasn’t designed for larger machines, and the somewhat clunky, rudimentary controls indicate that it would need to be rebuilt from the ground up to prove a superior alternative. However, it’s still a fine game and still the best Resident Evil game available right now, and if you’ve not played it already, you truly ought to. If you’ve already tried it on 3DS, there’s not a lot to bring you back, but any other Resident Evil fan would be best served giving it a go.