Regular Show may very well be the best cartoon series on television right now, rivaled only by Adventure Time. Taking the “disguised adult jokes” ball from Rocko’s Modern Life and running halfway around the world with it, the consistent nods to Internet culture and dalliances with dark humor make for a show that could easily have been on Adult Swim as opposed to Cartoon Network.

For a show with so many videogame references, an interactive spin-off was inevitable. Unfortunately, while Regular Show: Nightmare-athon is a relatively painless distraction, it’s certainly not an essential item in the Regular Show fan’s must-have checklist. 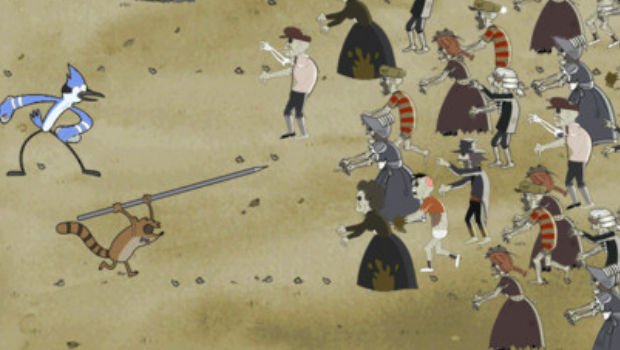 Nightmare-athon is a relatively simple score attack game, based on the Halloween episode “Grave Sights.” Zombies have taken over a live screening of Zombobcalypse, and it’s up to slacker protagonists Mordecai and Rigby to fight them back and protect the audience.

Gameplay takes the basic form of a static arcade shooter, a’la Space Invaders. Mordecai and Rigby are positioned on the left hand side of the screen, while increasingly challenging waves of zombies stumble in from the right.

Holding a finger on the heroes allows one to slide them up and down, while tapping anywhere else on the screen will have Mordecai toss a bowling ball at the oncoming undead. During combat, a gauge will steadily fill, allowing players to unleash Rigby by swiping the screen. Rigby will run across the field along a diagonal course, taking down zombies with his stick for a limited period of time. 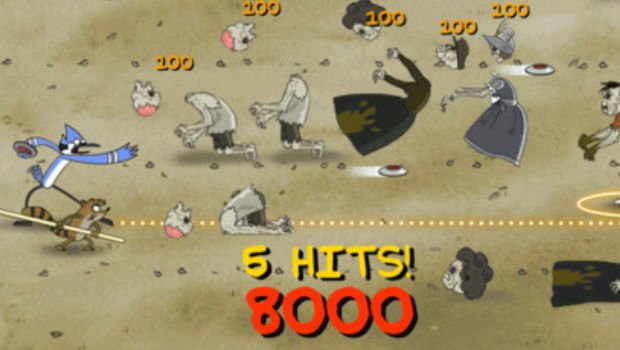 Pickups are dropped at random, allowing the temporary use of more powerful weapons such as discuses, javelins, or even a Skips-driven golf cart that smashes multiple zombies in a row. Outside of these powerups, there really isn’t a whole lot more to the game. As waves are cleared, the zombies absorb more damage and grow increasingly numerous, but otherwise you can experience everything Nightmare-athon has to offer in one session.

Every now and then, Mordecai and Rigby may spout phrases from the show, but the use of such phrases feel cynical and forced, which is at odds with the fact that Regular Show is one of the more honest and genuine cartoons on TV. To hear the characters state quotes out of context for the sake of it is a little embarrassing, really. Still, the graphics are pretty nice, resembling the cartoon perfectly.

Regular Show: Nightmare-athon is what it is — a quick little distraction cobbled together to promote the show and make a quick buck. With that in mind, it does its job well enough, and certainly isn’t badly made. It’s just rather flat, soulless, and incredibly repetitive. While it’s a decent waste of five minutes, even the most hardcore fans of Regular Show can find something better to do with times.

The phrase, “not bad, but not good either” is a worn and tired cliche. Sometimes, however, it’s the most pertinent thing to be said. Oh, that and the fact you can also just play it for free online.