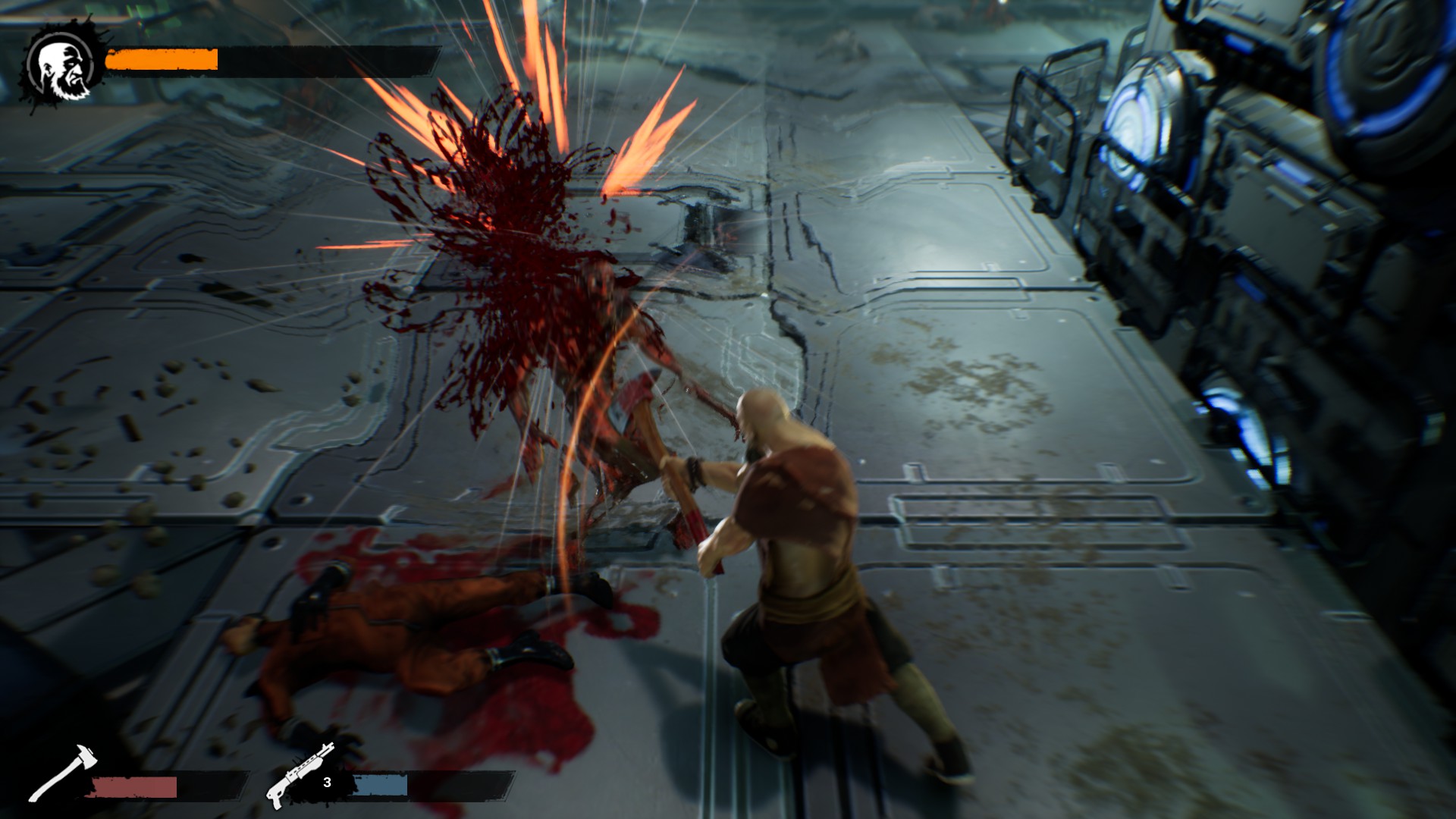 Revenge plots are overused in our media. I’m sure off the top of your head, you could come up with about 15-20 films that have a character going on a vengeance streak for the wrongs done against them. You could probably also name a handful of video games, since killing off a family or humiliating a character is an easy way to build up bad guys as “evil.”

Redeemer doesn’t try to break that mold, which is fine for a short bit. This is a game about being brutal, bloody, and difficult and it gets that right for the first third. Soon, though, things go south and the game never really recovers. 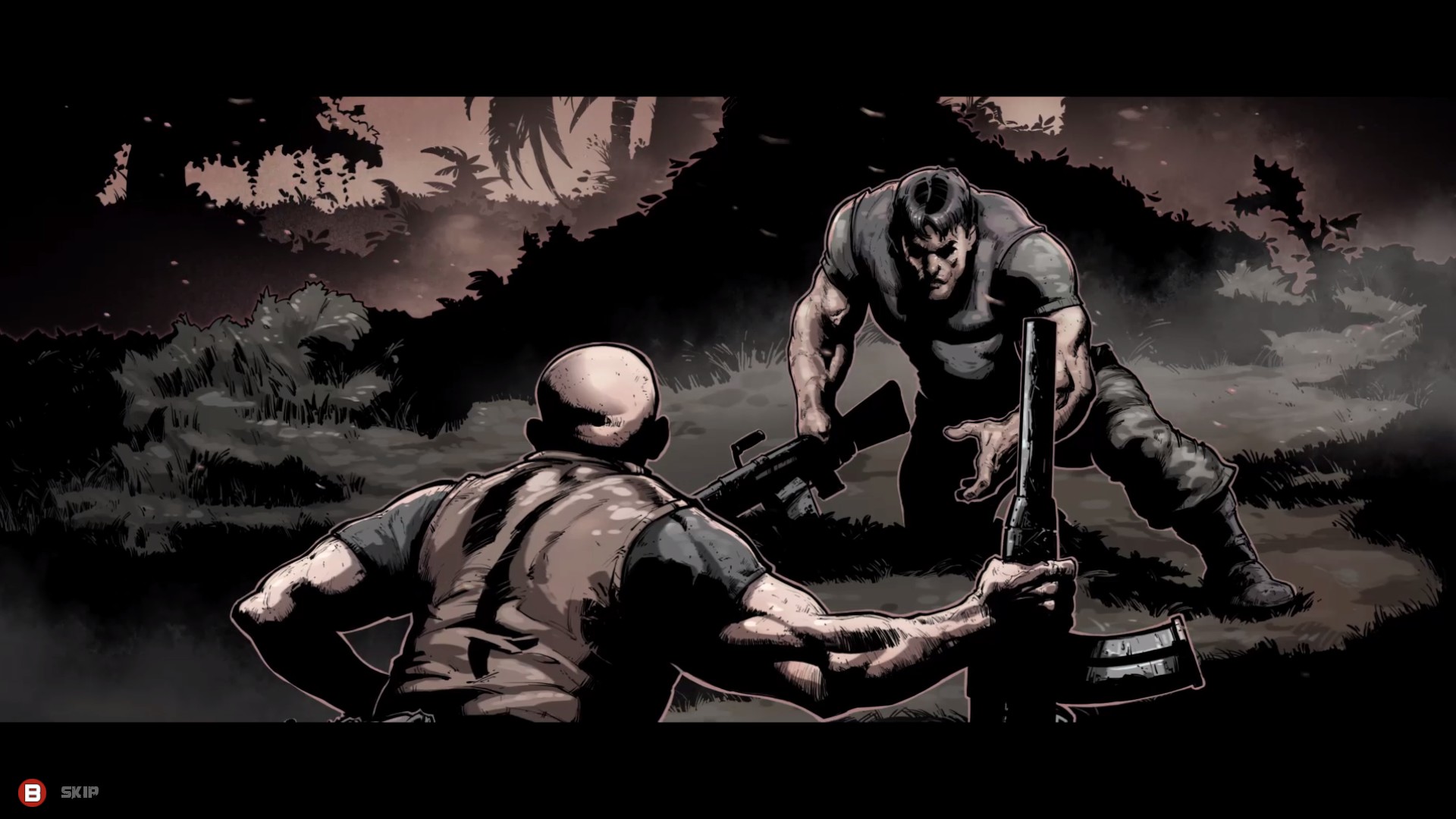 Redeemer starts in a decent manner that is reminiscent of a lot of old-school kung fu flicks. Your main character, named Vasily, had a terrible past where he was an assassin for hire working for an evil corporation. When they started to dig into cybernetic augmentation, Vasily wanted out. After a huge struggle, he escaped, but ended up crash landing at a monastery in some undisclosed mountainside.

After roughly 20 years of peace with the monks, the evil corporation finally tracks Vasily down and proceeds to destroy the life he had built. Unable to escape his tormented past, Vasily finally embraces the rage inside him and commences a vicious killing spree to end the corporation once and for all.

With that simple setup established, the game quickly thrusts you into the action and has you murdering foes within minutes. The first cutscene is short and sweet and doesn’t waste your time getting to the meat of the game. While the camera evokes a sort of Hotline Miami charm, this is not a twin-stick shooter. Redeemer is basically a beat-’em-up, with all of the pros and cons that genre used to have.

You have a light and strong attack that you can string together into some makeshift combos, the ability to carry weapons (both melee and firearms), a dodge roll, a block, a stealth takedown, and the ability to disarm. It gives you a bunch of options to deal with foes, of which there are varying designs.

One of the cooler features (possibly inspired by 2016’s Doom) is that killing enemies regenerates your health. While you’ll always recover to about 25% when damaged, if you want to heal more, you’ll need to put the pressure on foes and utilize context-sensitive kills or environmental takedowns to restore anything more. It keeps the action going, since running away to hide doesn’t benefit you much.

You’ll start off tackling some basic humans and eventually that progresses into heavy grunts, firearm-clad grunts, shielded flamethrower units, and dreaded zombie-like enemies. The combat almost feels like the Batman Arkham series, since you can time out your blocks to initiate a counter that temporarily stuns your foes. While you can’t spam block, you don’t really need to put much thought into when you press the button. 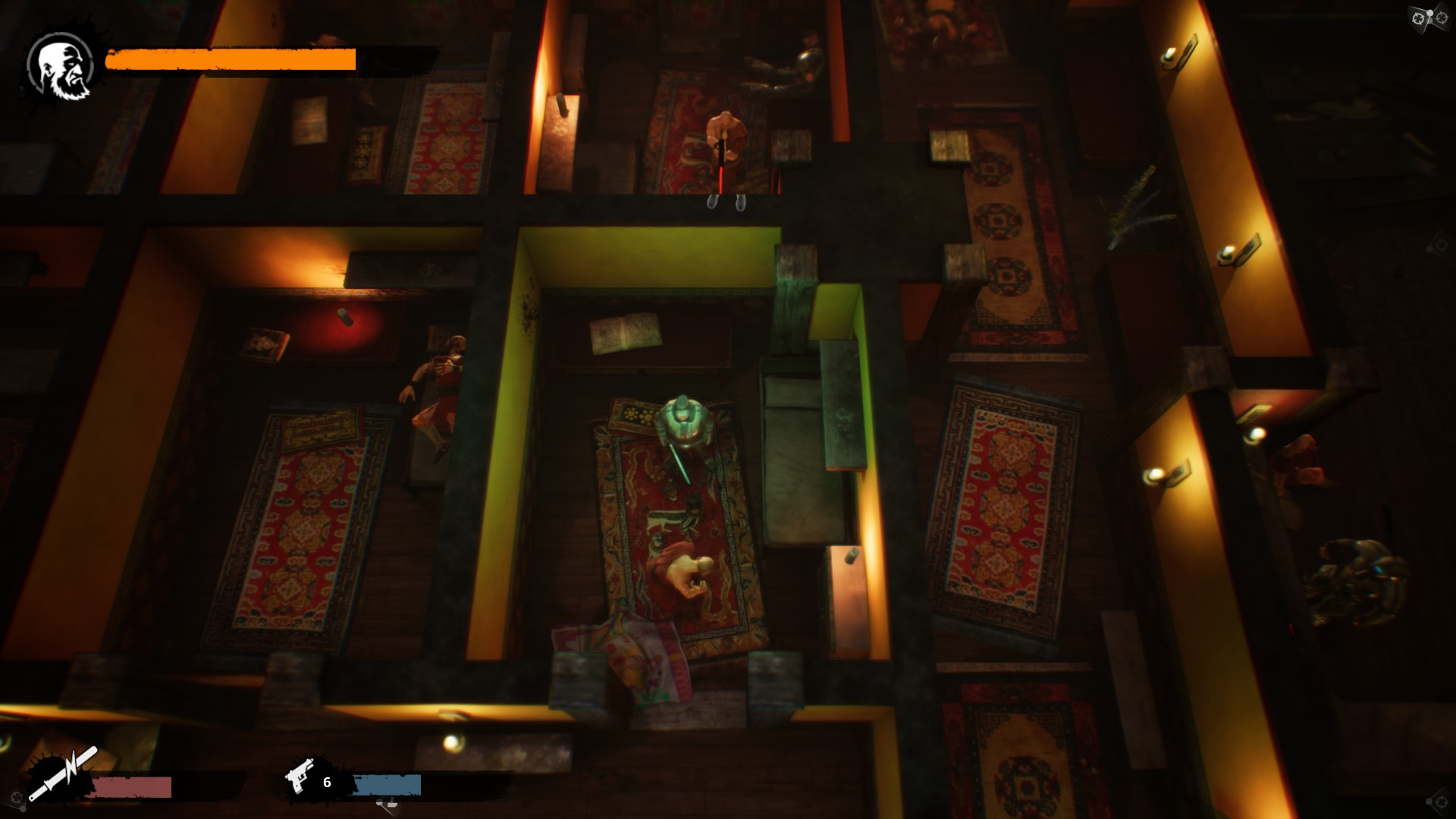 For a short bit, this all works well. The game is fast-paced and likes to give you ample opportunity to try out things like the aforementioned environmental takedowns and throwing objects. After the sixth level, though, all of the energy and fun gets sucked out. Since zombies are pretty resilient to physical attacks, the game becomes a slog of rolling around to find melee weapons while being chased by upwards of 10 enemies at once. The level sizes also balloon out to insane degrees, turning what used to be roughly 10-minute sections into 40-minute affairs.

This would be fine if the checkpoints were evenly spaced, but some of the later levels don’t even offer the chance at a breather. If you die, you’ll either be set back upwards of 10 minutes or have to restart the level which then becomes infuriating. Not only that, but quitting at any point resets your progress on a specific level, so you better hope you complete the entirety of a tough section or you’ll just need to relive that agony.

It doesn’t help that the level design never really does anything interesting. It’s okay to have more simplistic designs at the start to get players acquainted to the control scheme, but all of the cool ideas like hiding behind walls and sneaking up on foes for stealth kills just stop mid-way through. As you reach tougher enemies, you can’t even stealth kill them, so that entire tactic becomes worthless. 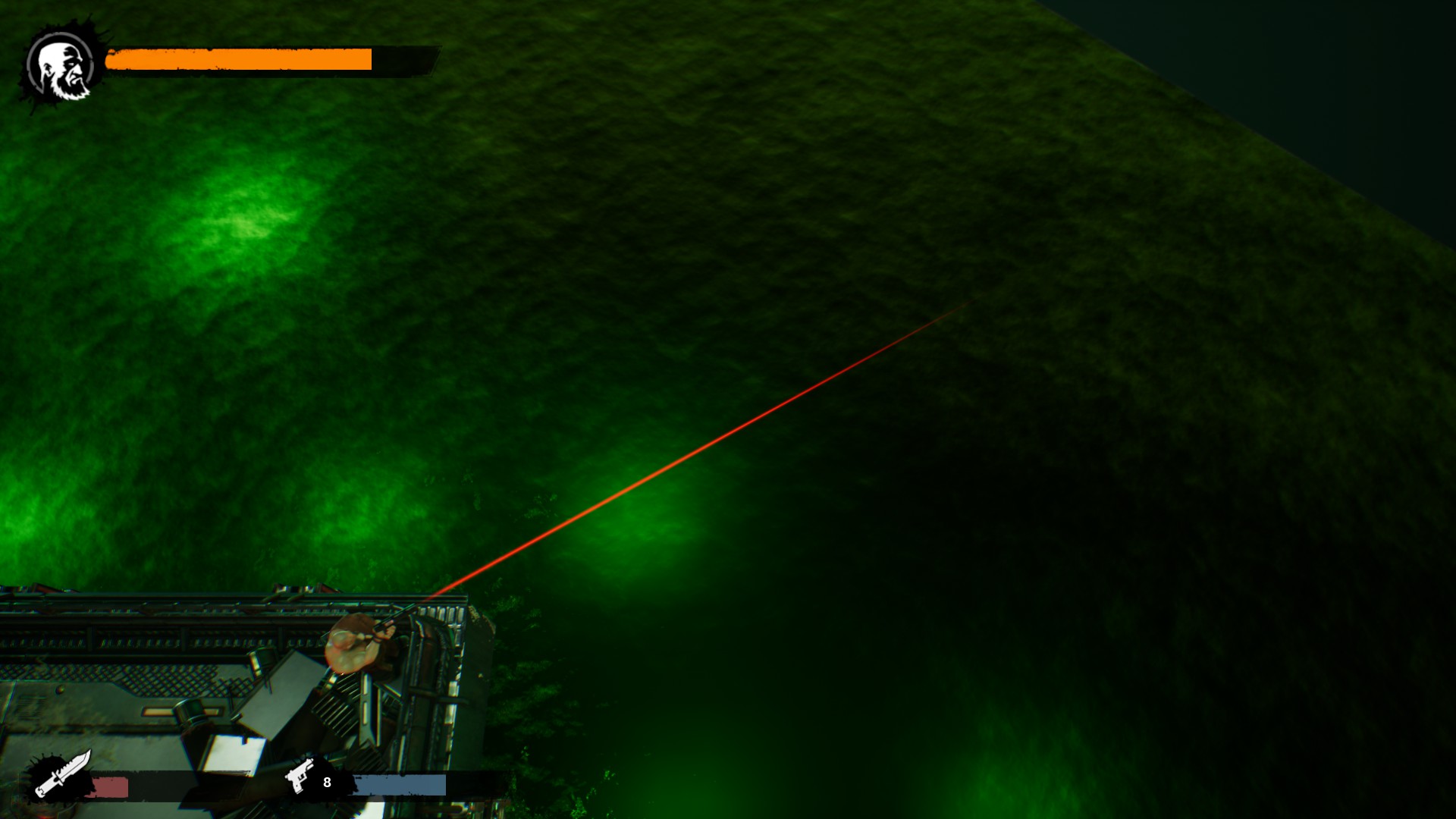 Guns begin taking on a bigger role, since it becomes the most effective way to deal with foes that don’t bother to get stunned. Sure, you can charge up a punch for a stun, but when five or six guys are running you down, trying to find a moment to hold down attack is nigh-on impossible. It would be somewhat understandable if the enemy AI consisted of more than just guys running straight at you, but that never changes (even on boss battles).

It doesn’t help that when in the middle of a takedown animation, you’re still vulnerable to enemy attacks. There were a bunch of moments where I started to murder a guy, but was killed in the process and just had to wait for the animation to stop before the “You Died” screen came up. It becomes doubly strange when your health bar actually refills, yet you’re still considered dead.

So even without aspiring to be, Redeemer ends up feeling like a really poor rip-off of Hotline Miami and that is a total shame. It exhibits a lot of cool ideas and has a serviceable plotline, but it mostly feels like the end result was rushed out to simply finish the game. Maybe Sobaka Studio ran out of budget, but I have no idea why the later levels are so poor compared to the start. 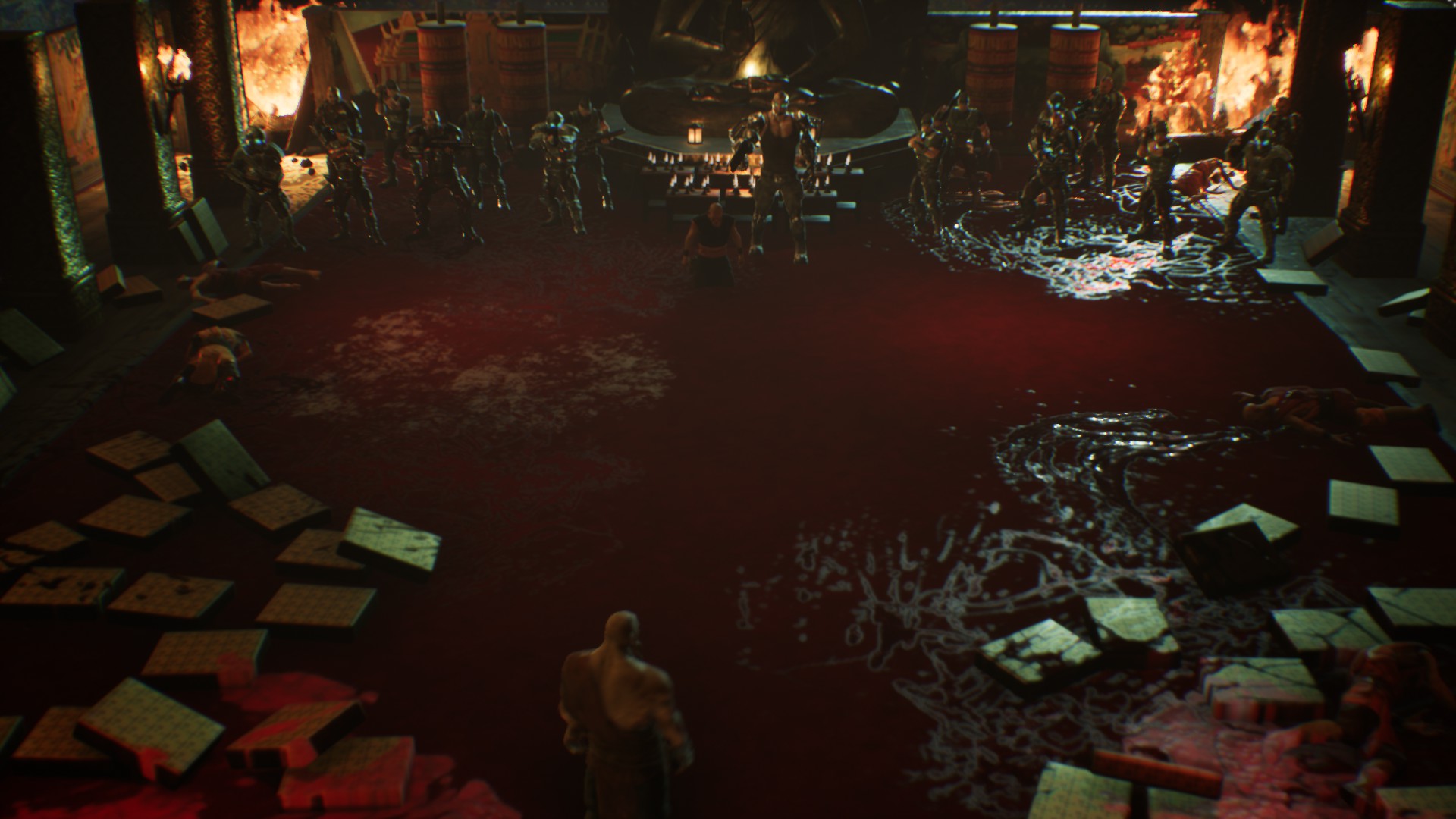 At least the performance is nice. Running on the Unreal 4 engine, this game looks pretty decent and scales well to different hardware. There aren’t a vast amount of options for tweaking graphical quality, but you can easily turn off typically high demanding features like shadows to smooth out the framerate. I’m not sure why everything looks like it was smeared with Vaseline, though.

Sadly, a lot of the animations are glitchy and you’ll often see Vasily float away from an enemy during a takedown animation. I also managed to get stuck behind some geometry in a few levels, but you can thankfully restart checkpoints while in the middle of a level. That doesn’t help much with poor level design or shoddy collision detection, but it’s something.

The audio design is also lackluster. The voice acting is okay, though thankfully not too prevalent. What doesn’t work is how minimalistic the music is. You’ll travel through levels with only environmental noises to accompany you and even intense action scenes don’t exhibit anything. The sound effects are just bland and lack a lot of impact, which sucks when you’re slicing an axe through a guy’s head. I want to hear the crunch and squish of blood and bones, not just a generic thud. 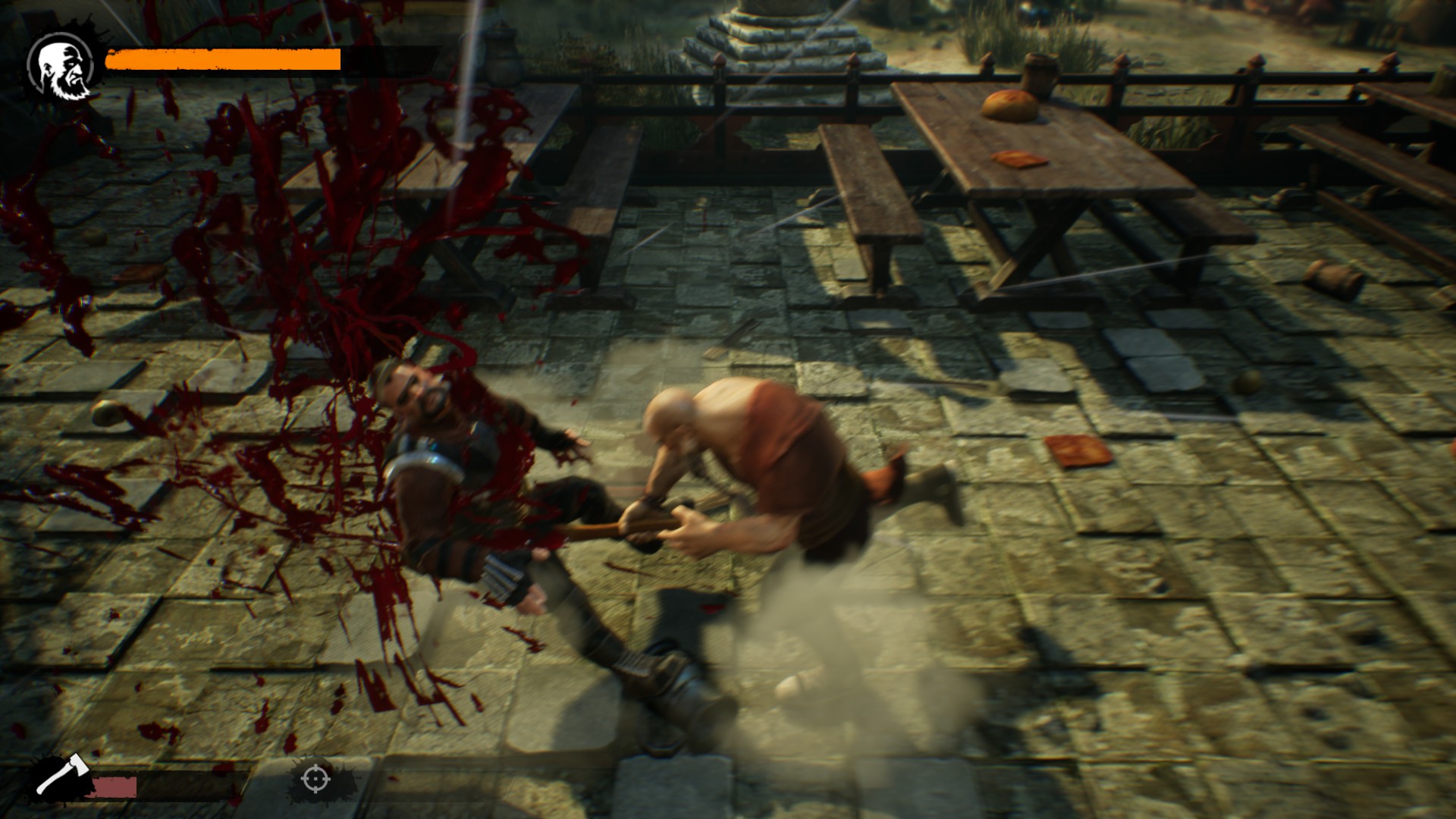 Once you’ve completed the main game, which took me roughly six hours on “Hardcore” mode, you’ll unlock an arena-style horde mode where you’ll face off against endless waves of foes. Seeing as how the game lasts roughly four hours too long, I didn’t even bother to see what this was about. I can’t stand the thought of fighting waves of enemies since most of the encounters during the campaign feel exactly like a horde mode.

So overall, Redeemer is a bit of a dud. While it certainly has a good premise and delivers on its promise of blood and brutality, it just feels like the game came out of the oven too early. Hopefully after a few patches and some more polish, Sobaka Studio can iron out the bugs present and tighten up the flow to create a decent little brawler. Until then, give this a pass.