There’s no peace of mind here…

I’d probably make a horrible detective. It’s not that I have any issues with observation or deduction, but rather I’m empathetic and I tend to trust people immediately. I also don’t smoke or drink coffee, which I think instantly disqualifies me.

I still fantasize though, and what better way to do so than through the medium of video games? This way I can smoke and drink as much coffee as I want while also digging through the mucky cesspool where not even the bravest sanitation workers are willing to dwell. Rainswept is one such murder mystery, except rather than uncovering the dirt that people keep hidden, the focus is more on the dirt that builds up inside of us. 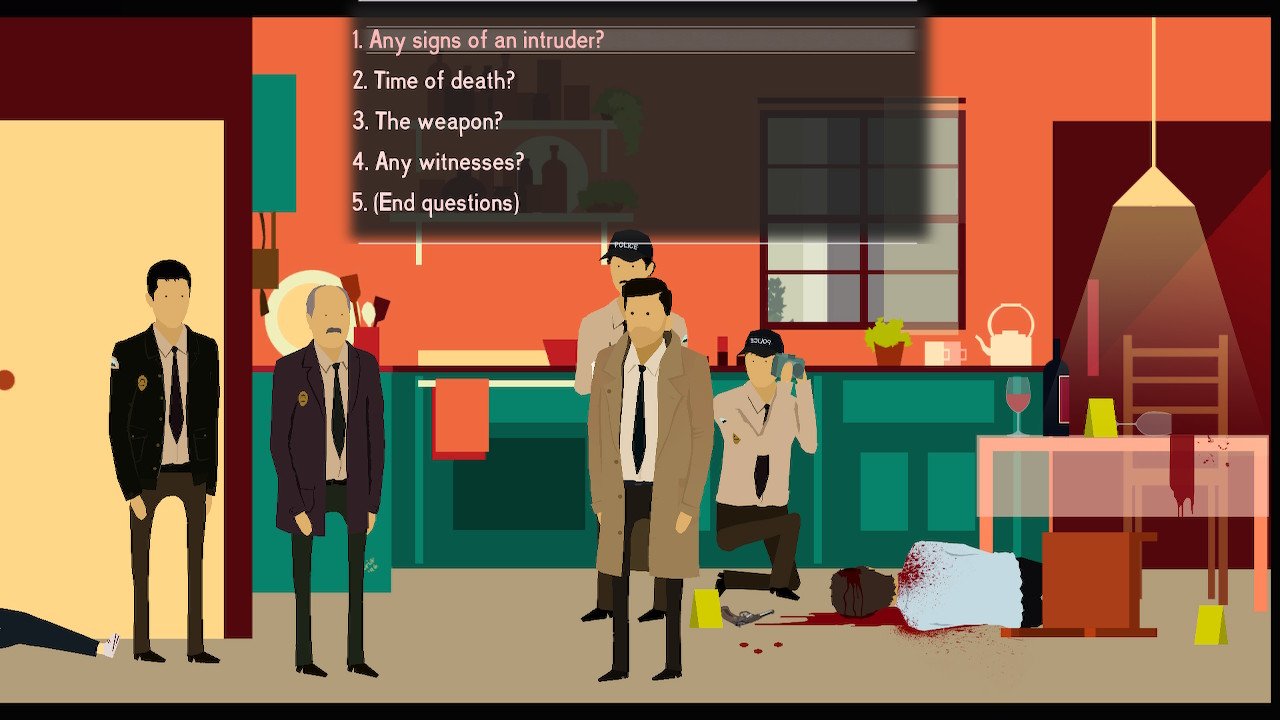 Rainswept starts off with a warning that it will show you exactly once and never again: “This game contains references to topics such as suicide and trauma which some players may find distressing.” About midway through the game, I was wishing I had heeded that warning because I’m certainly one of those players who found it distressing.

The game opens up, after all, with a man shooting himself in the head. Stop there! We found the murderer! Actually, the crime scene definitely portrays a convincing representation of a murder-suicide. The man’s girlfriend, we find, was shot at point-blank before the man suffered the aforementioned head wound. There’s no sign of forced entry or struggle.

The city police send in Detective Michael Stone to investigate and he quickly discovers something is not right. Three shots were fired from the pistol, the neighbour only heard one, and the window was left open despite the rain that constantly falls on the town. To complicate matters, the local police have basically already made up their mind on the matter, and the town’s population all abuzz with murmurs of the couple’s domestic problems.

With everything working against him, it’s up to Detective Stone to get to the bottom of this.

The depression hits you from two vectors. The first is, of course, learning of the couple’s problems leading up to their tragic end. What starts out like a fairytale romance gradually sours until the murder-suicide angle really sounds convincing. The couple’s tribulations are presented in a disturbingly believable manner, as vicious arguments swirl and then dissipate into apologies and promises that ring empty.

Meanwhile, Detective Stone is dealing with some heavy baggage himself. Previous to his assignment, his wife died in an incident he has shouldered the blame for. He’s left struggling to find the will to continue living. Initially, the ghostly appearances of his wife and his abstract dreams seem almost trite, but as the case begins to slip through Michael’s fingers and his rationalization amps up, it starts to hit home. 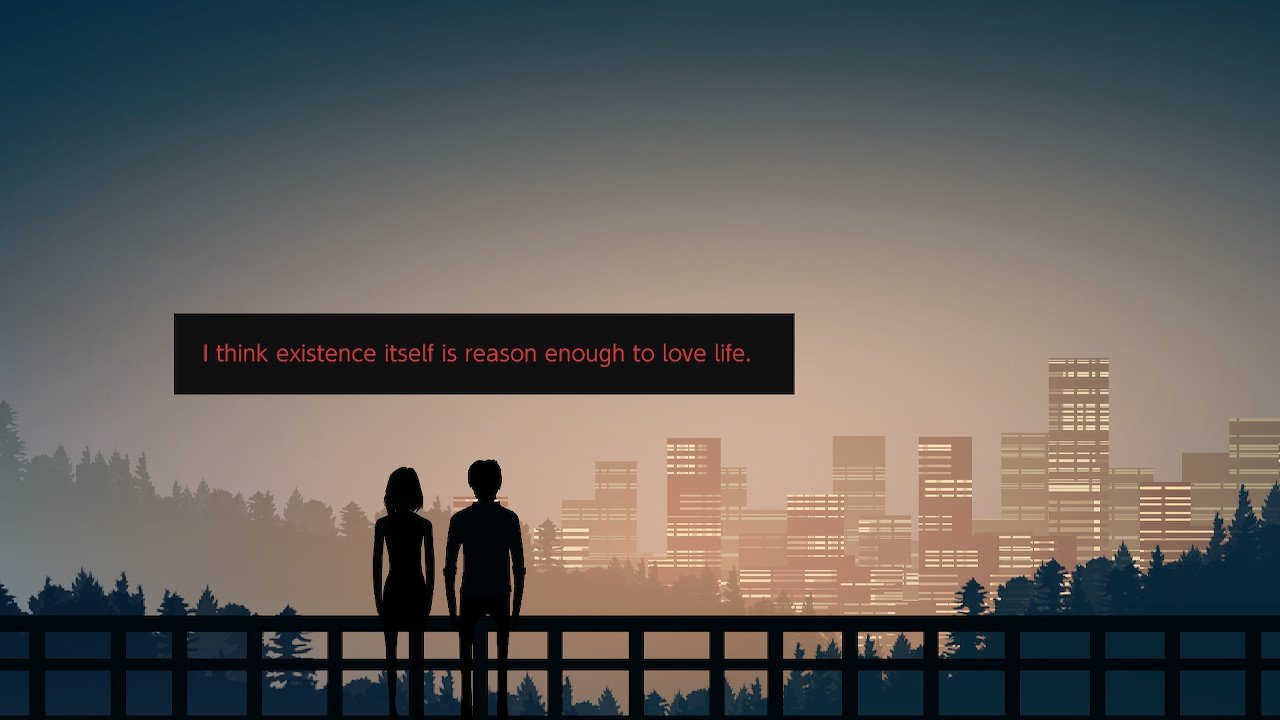 Stepping away from the brink for a moment, Rainswept is a light adventure game. There isn’t much in the way of puzzles or even any sort of player agency beyond dialogue choices. In that sense, it’s a bit closer to a walking simulator or visual novel, so don’t go in expecting to take hold of the case and find the killer in a heartbeat. You’re coming along for the whole ride.

The featured art style is nothing if not striking. It bears the image of low-detail, paper cutouts and the effectiveness ranges from impressive to laughably bad. One of the issues I had continually crop up is the characters’ dotted eyes. From a distance this doesn’t look bad, and sometimes when the game calls for a close-up, more detail is added to give the actors more expression. But there are other times when there’s a close-up and the characters are left with these tiny, expressionless dot eyes.

The art was all done by, like, one guy, so all things considered, it’s not bad. It’s just not always good, either. 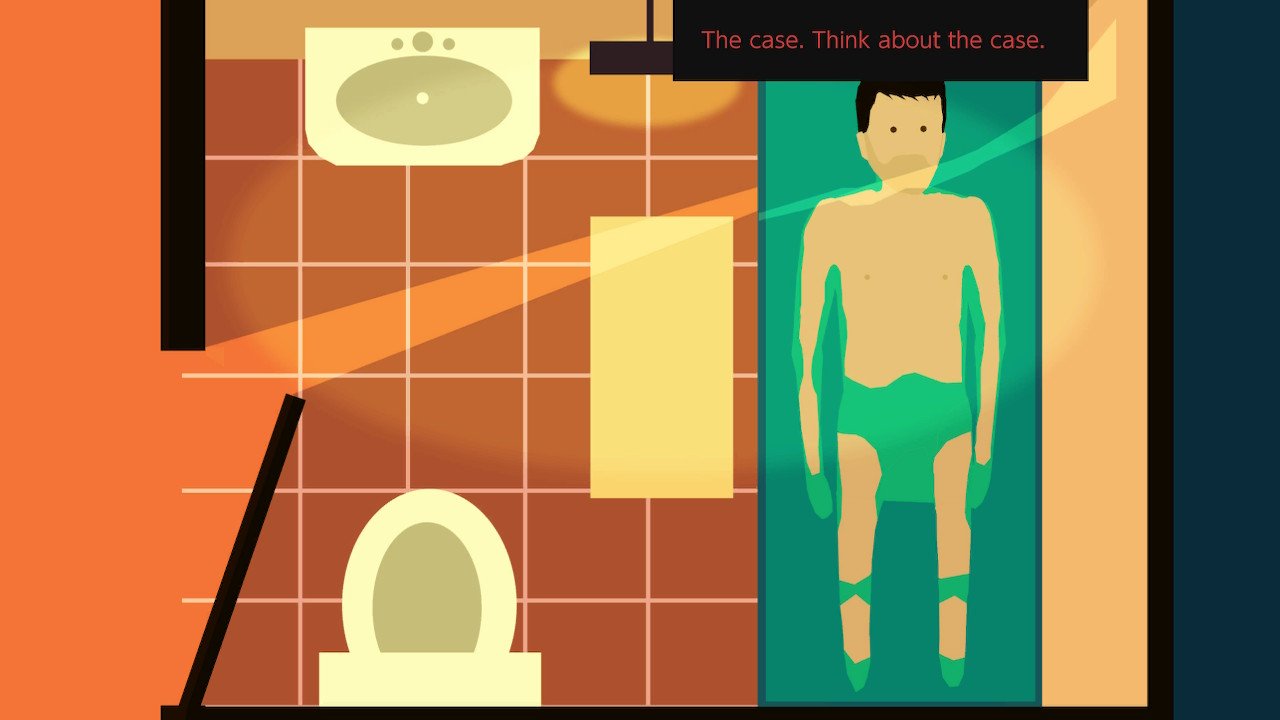 While Rainswept is certainly capable when it comes to the handling of its human characters, the core murder mystery is a little less well-executed. It definitely succeeds in misdirecting, dropping red herrings at every turn to mislead you, but when it finally gets down to whodunit… I’m just not sure.

I may be projecting here. I wasn’t able to guess the real circumstances for the murder until it was presented directly in front of me, but maybe that’s my poor detective skills at work. My husband, on the other hand, was able to untangle the plot, and he also found the game too disturbing to watch outside of a few glimpses.

I just found the end to be a little empty. I can’t really get into it further than I already have without spoiling things, but it seems to me that the case would have been a little less ambiguous if certain clues weren’t conveniently overlooked by the police. 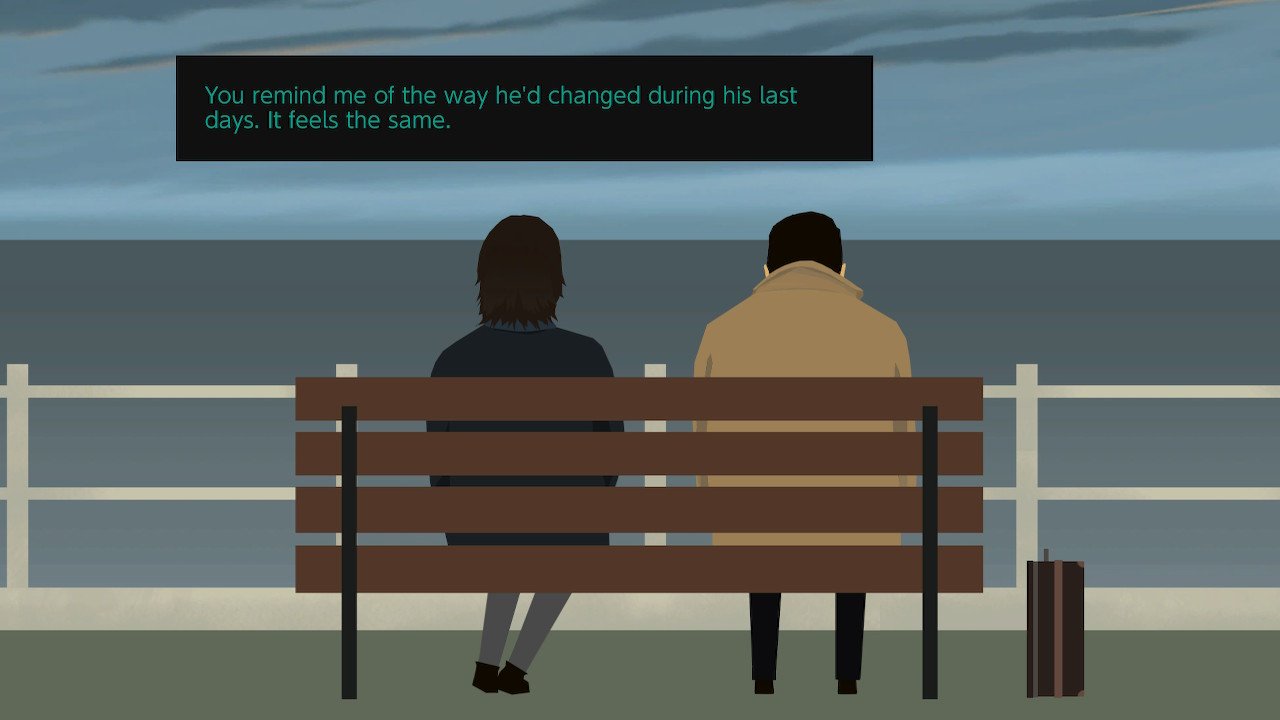 The game’s splash screen depicts protagonist Michael Stone gripping a pistol, finger on the trigger. However, if you come expecting grand shootouts and police brutality, you’ll find nothing of the sort. Instead, open wide for a heaping helping of pathos.

Rainswept is a heavy game. Its sad piano music and endless poetic rainfall underscoring the human tragedy depicted. If you’re capable of shouldering the game’s baggage, Rainswept provides an “entertaining” tale. I certainly “enjoyed” it. However, if what you’re looking for is a fun murder mystery to sink your teeth into, you might be better off seeking clues elsewhere.