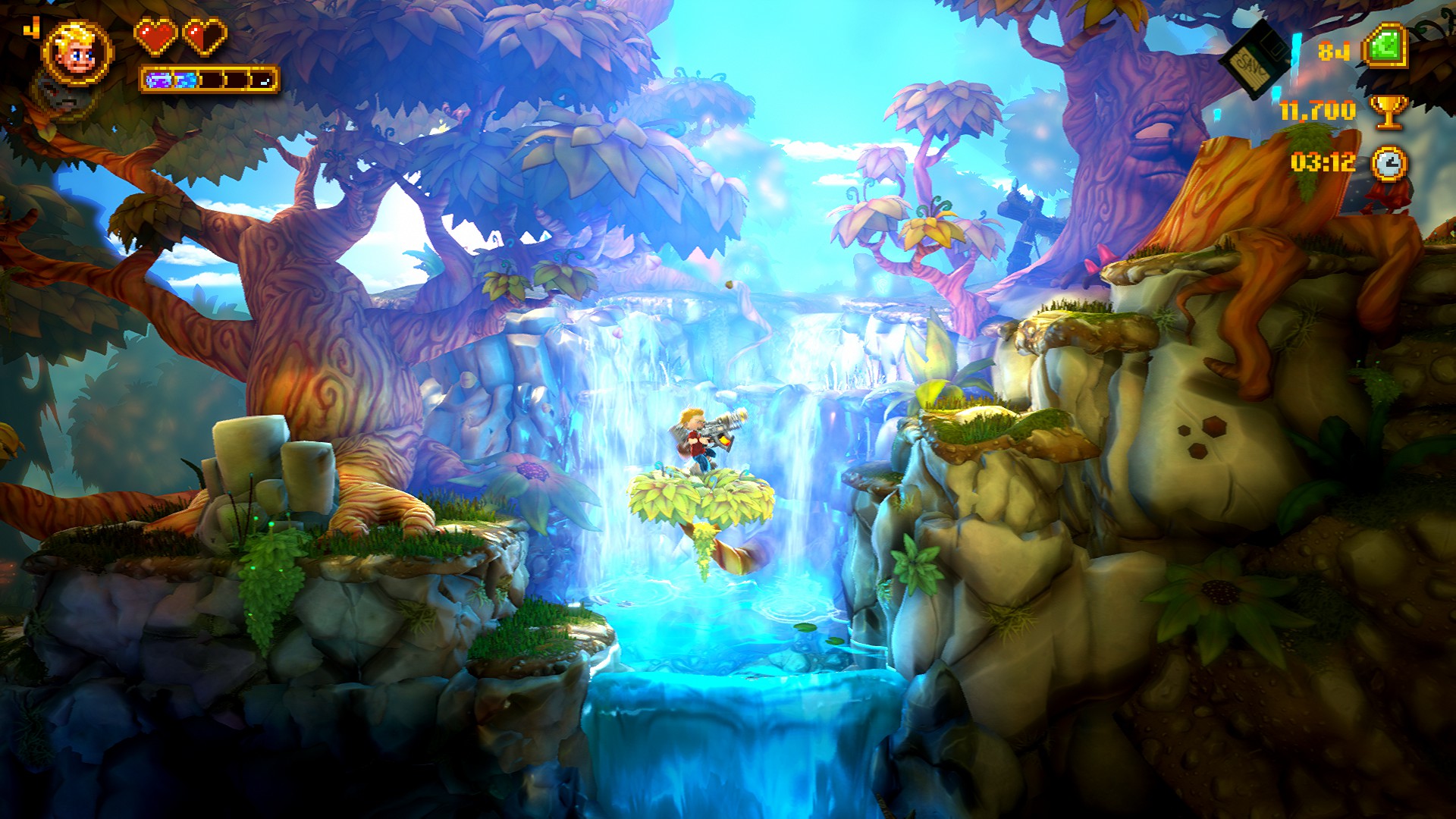 What is the opposite of Rad?

First impressions count for a lot in gaming. Sometimes a bad launch can tarnish an otherwise solid game from ever recovering, but there are some rare instances where a title gets a second shot. Rad Rodgers happens to be one such game. I reviewed the original release on PC a little over a year ago and I was surprised to learn there was new content coming to the game.

I thought the game was pretty decent, just lacking in some key areas. Does this fix any of the issues I originally had? Does the new content live up to the promise set by the original? Sadly, it seems developer Slipgate Studios has squandered that second chance, because this more “complete” release of Rad Rodgers is markedly worse in almost every category. 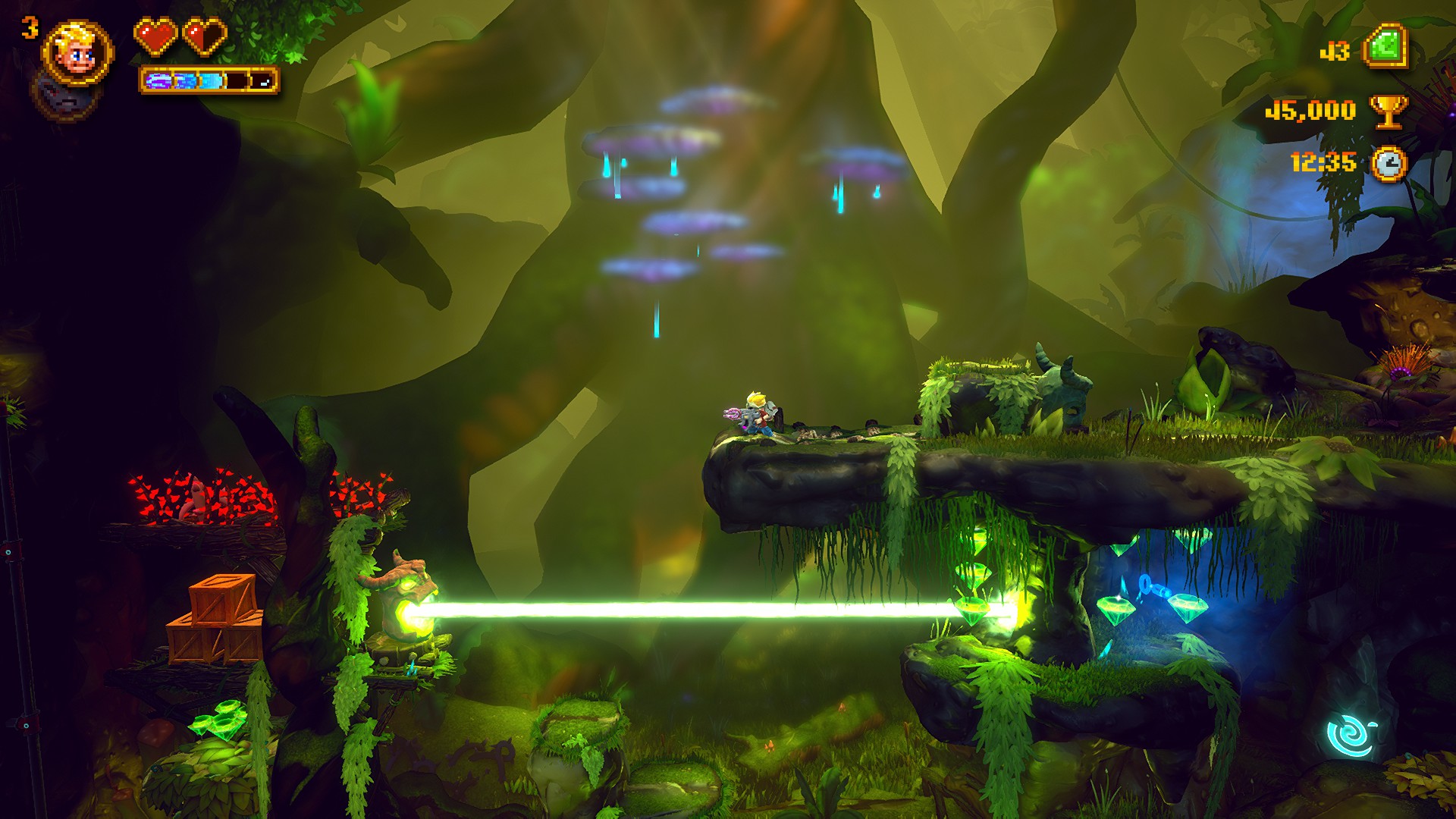 The plot of Rad Rodgers isn’t all too important, but this new release doesn’t expand or change any of the details from the original release. Rad is still a kid living in the ‘90s that hates school and loves video games. He gets sucked into the world of a game and his console, named Dusty, takes on a personality and guides him through this new world. His console is also voiced by Jon St. John, so curse words and absurd humor ensue.

I don’t have a problem with the relatively threadbare plot since classic MS-DOS sidescrollers rarely had anything resembling a plot. A lot of older games were still coming to terms with how to properly get players invested and narrative design typically took a backseat to interesting gameplay hooks. Rad Rodgers doesn’t do anything new, though, even with this second lease on life.

You’ll be running and gunning through nine main levels along with three completely pointless pogo-stick levels in what amounts to a lot of padding on the original premise. The regular game had six main levels with a boss fight, but I guess more content equals better. Any of the somewhat decent designs from the original are muddled by some new collision detection model that is just terrible.

I may have had some issues with jumps in the original release, but I can’t tell you how many platforms I fell through or otherwise missed thanks to whatever is going on with Rad’s physics. The best example I can give is in this area where there are some platforms spinning on wheels in front of a waterfall. Since the geometry overlaps, Rad tends to get shifted to the next coming platform without you doing anything, which is very disorienting. Dusty also loves to pull you up to ledges you weren’t aiming for, which is totally great for random deaths you could have easily avoided.

There is something very odd going on with the jump mechanic. For some unexplained reason, Rad can jump in mid-air. He doesn’t have access to a double jump, mind you, but you can do some weird Donkey Kong Country style antics by falling a long distance and then jumping at the last second. The thing is, this isn’t consistent and sometimes Rad decides not to jump. It leads to many segments where you’ll be plummeting towards spikes and then just watch Rad die when he hits the ground.

These physics don’t really change for the new pogo levels, either. Here, Rad will be relegated to moving on a pogo stick and has to jump up a level while water gradually rises below him. Sometimes you’ll fly through multiple platforms and Rad will automatically jump, where other times he won’t. You can also immediately fail them and skip the levels, so I’m not sure what the purpose of including them was. I understand these are meant to be a nod to Commander Keen, who would often jump around on a pogo stick, but they feel like padding on an already padded-out game. 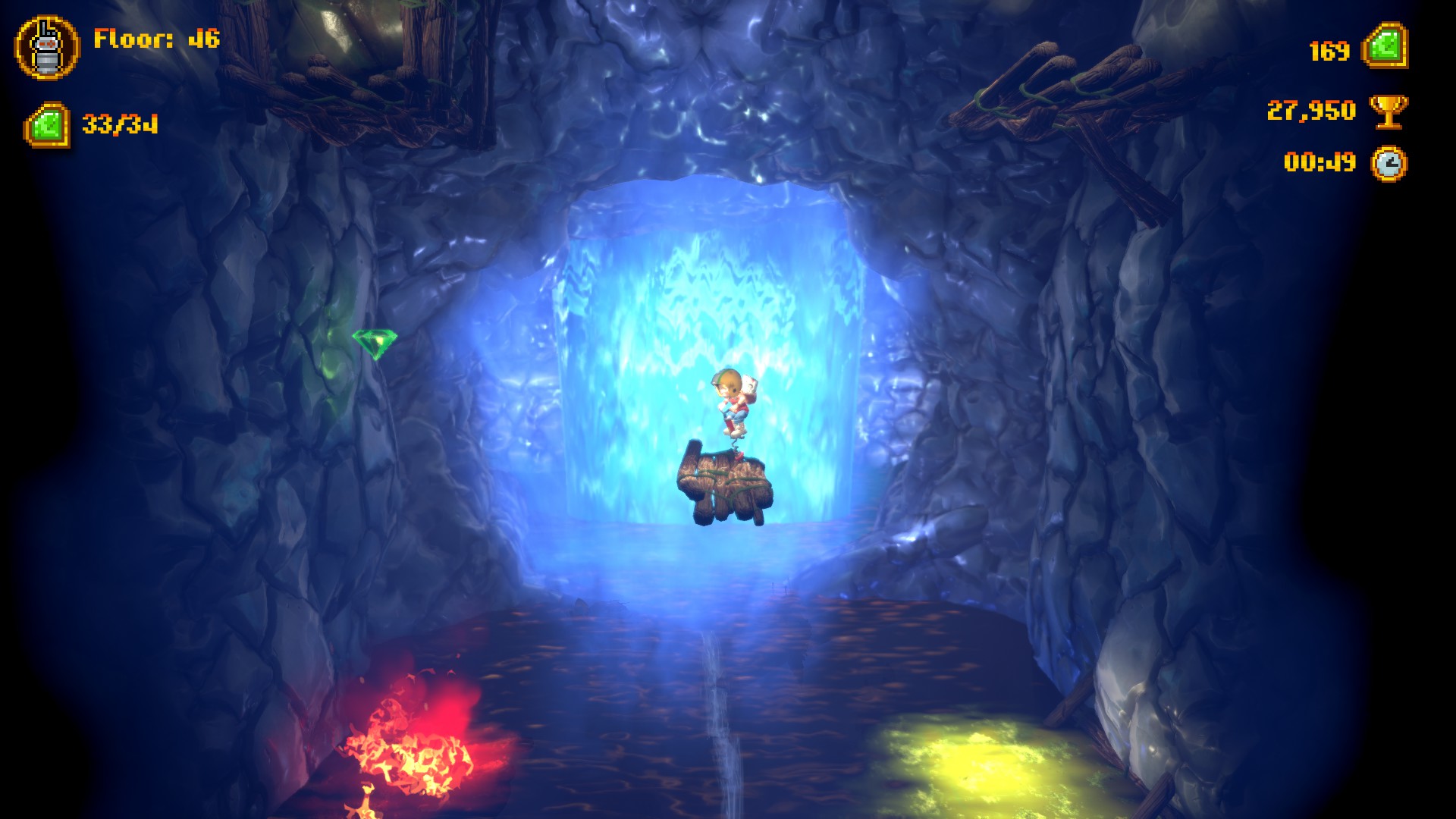 As for combat, something has gone seriously wrong with the AI now. While I wouldn’t call the original game challenging, now the enemies are completely braindead. If they aren’t running around in circles for no reason, they’ll stand still to shoot at you and never even attempt any form of self-preservation. The bigger threats, which can often one-shot you, will also stand at the edge of the screen and let you pick them off, which mostly makes for scenarios where you’re actively trying to avoid enemies due to how boring the game feels.

I also cannot get over the new laser totem enemies that have been thrown into some levels. The shoddy collision detection strikes again as these beams will hit you with pixel perfect accuracy. Some of the traps have you navigating through beams while standing directly under a totem that isn’t firing, thus elongating the time it takes to run through a level. If you get even the slightest bit too close, Rad will take damage and often outright die.

At least the combat mechanics have slightly improved. My biggest beef with the original was a lack of a button for changing weapons, but that was mainly because the grenade launcher power-up couldn’t break boxes. That has been fixed, so Rad is now able to shoot everything. That being said, the rapid-fire power-up is more like a downgrade, since its fire rate seems to have been lowered. 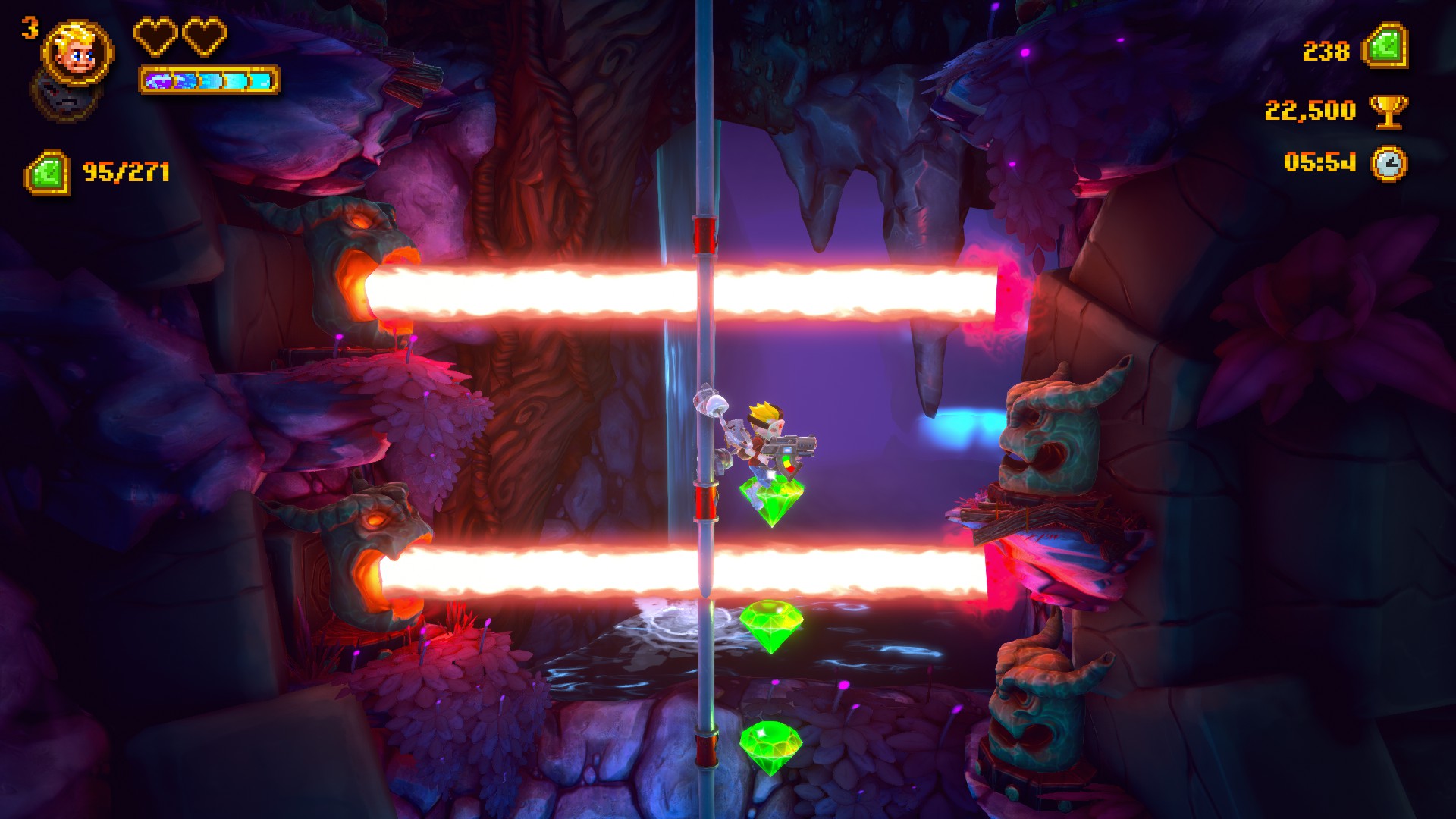 Speaking of those boxes, new TNT boxes populate the levels and there are even some question mark boxes. Sometimes you’ll run up to a question block to smash it and it will explode in your face. The splash damage radius is also insane, as I’ve been on a platform below an explosive box (that was masked, mind you) and died due to the explosion; so much for being fair.

All these problems and I haven’t even gotten into Dusty’s “revamped” pixelverse stages. At certain points in each level, you’ll need to have Dusty jump into the game code and move around platforms for you, but even these segments aren’t free of new issues. More puzzles have been added to mix up the flow, but the tutorials given for these are so abrupt and poorly explained that you’ll naturally end up with a few deaths due to not understanding what is going on.

It doesn’t help that touching certain enemies or obstacles hurts Dusty, but those objects tend to disappear for some reason. I also encountered a segment where Dusty was periodically losing health for no reason. Once he died, I got kicked back to Rad who was now completely bald. The game started eating itself and I had to bear witness to it. 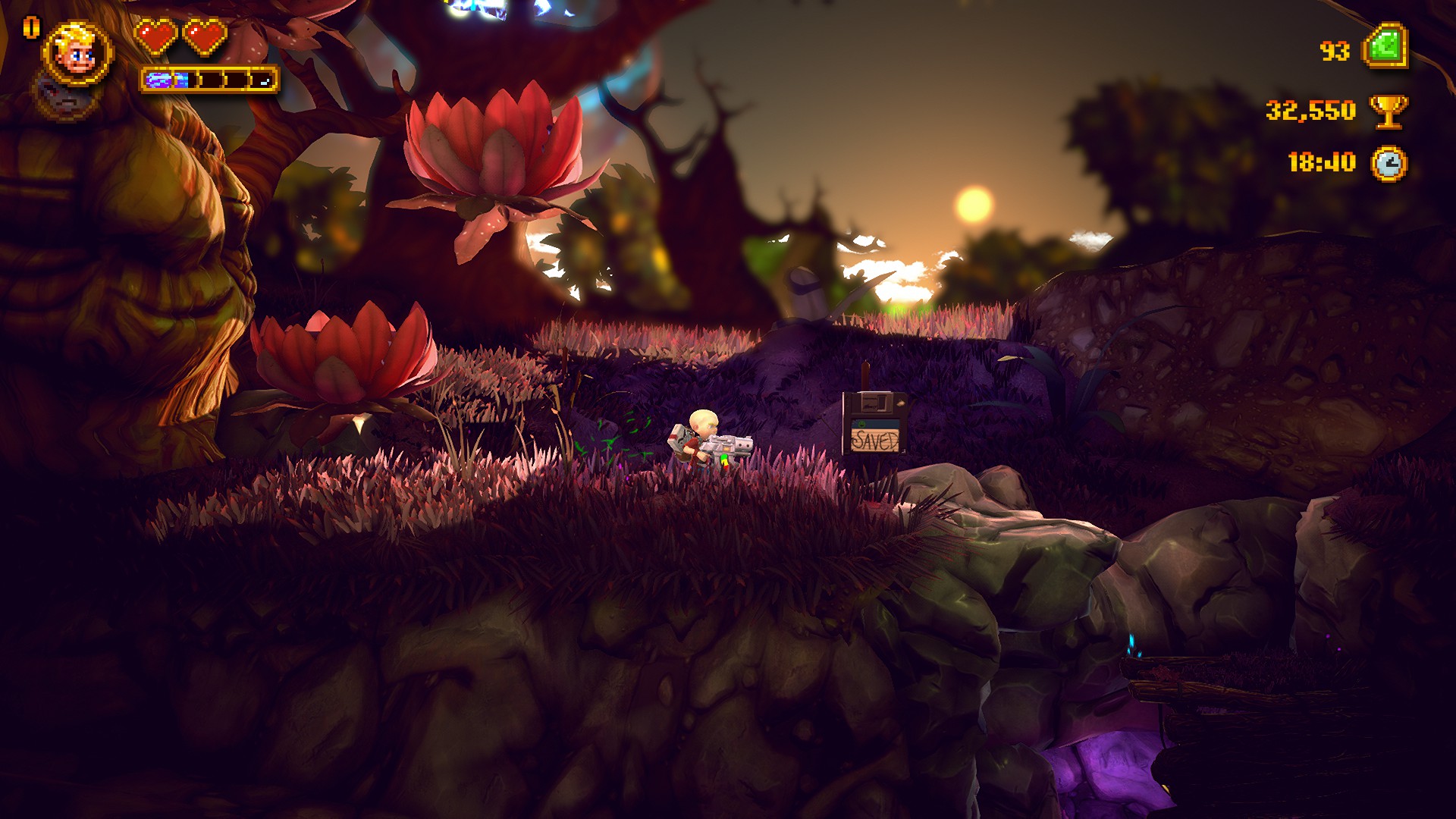 Really, I’m just awestruck at how bad Rad Rodgers has become. What happened to all the promise I saw in 2016? Where did all those original plans for World Two end up? Why was the collision detection changed when the original worked just fine?

Previously, I enthusiastically stated that Rad Rodgers had “sleeper hit” potential, but that has been absolutely obliterated now. The foundation for something better is still here, but Slipgate Studios has reworked Rad into something that isn’t worth spending your cash on. At least on PC, you can still get the original version with your purchase (or get an “upgrade” to this new one for free), but console gamers should stay far away until some patches land. Even with patches, I don’t know how much you can fix in this game.

[This review is based on a retail build of the game upgraded to the new version that was provided by the publisher.]