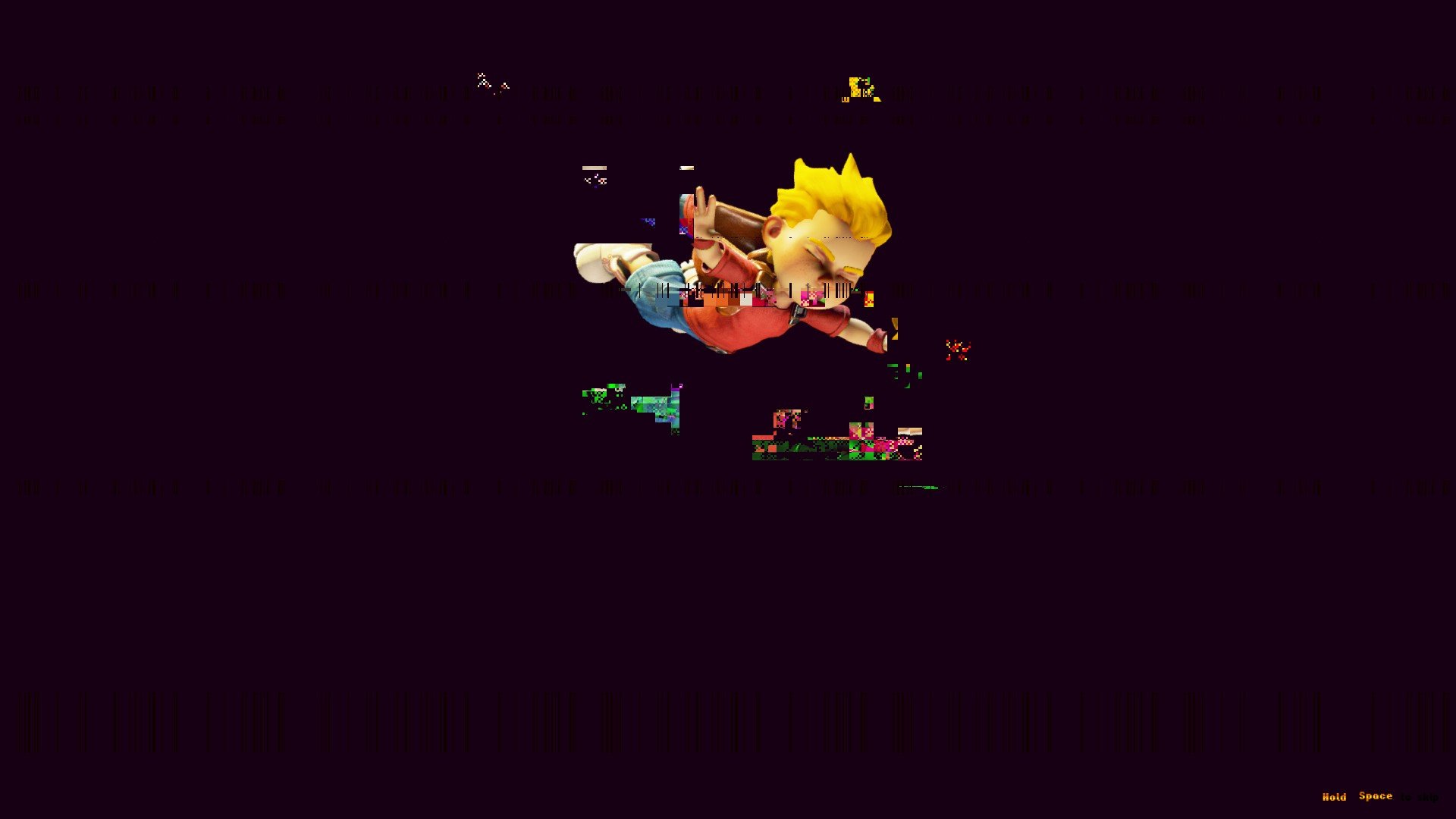 As I mentioned in my preview piece, Rad Rodgers: World One came out of nowhere. I was struck by the mind-blowing graphics and how 3D Realms was publishing a game from a relatively unknown developer. It looked like a throwback to Commander Keen with the visual polish of a recent “next-gen” title. Color me impressed.

After having played through various early-access builds and the release code, I can’t say I’m as enthusiastic as I once was. Don’t get me wrong, there is a lot to like with Rad Rodgers, but there is also not much in terms of longevity or originality. 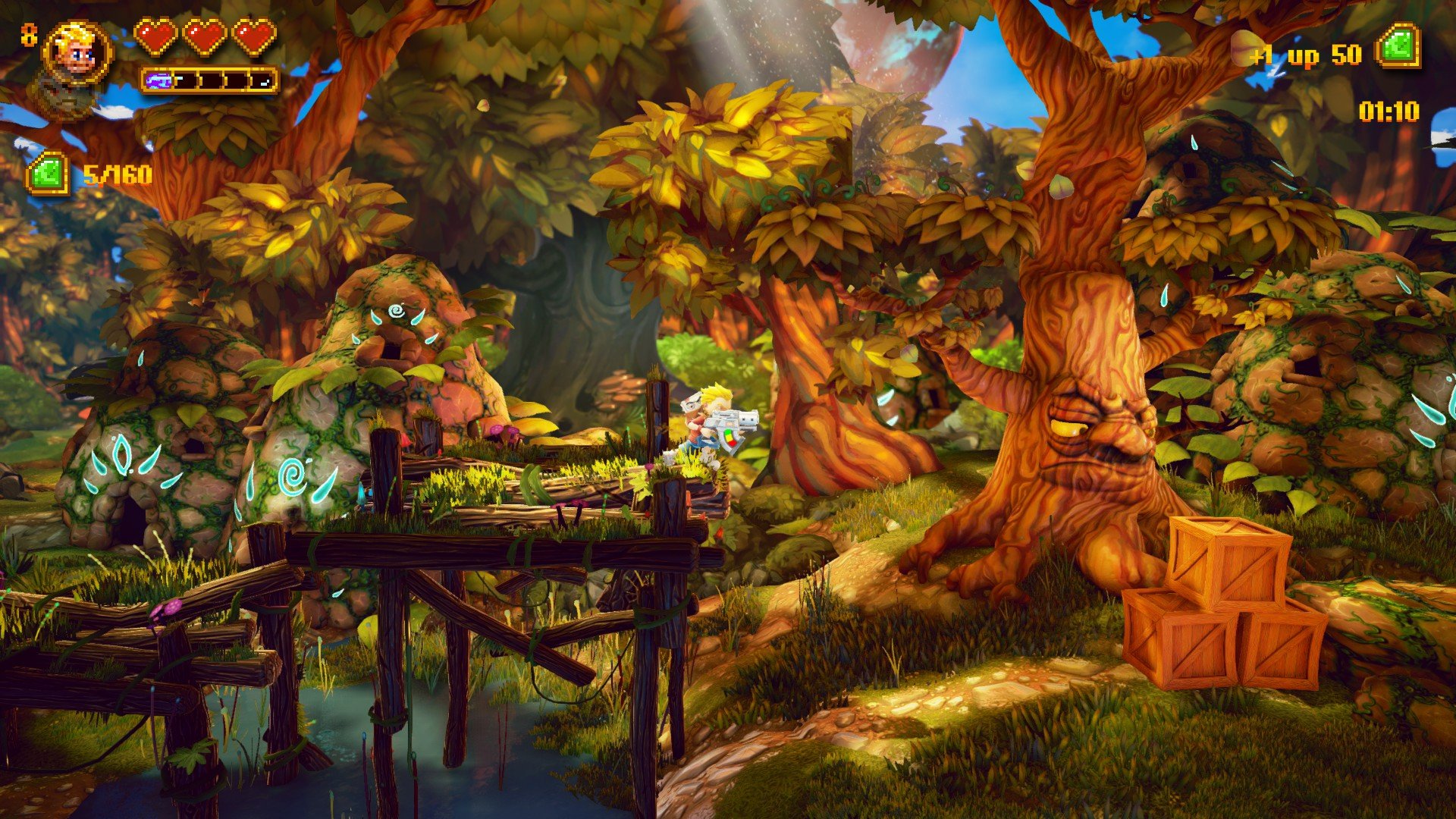 Rad Rodgers: World One follows the story of a young boy named Rad. Rad is a ‘90s boy who loves video games and hates school. After his mom tells him to get ready for bed, the boy refuses and his mom unplugs his console. Once she leaves, Rad ends up heading into bed before his console comes to life and eventually sucks him into a game world.

Thus kicks off the adventure, with Rad waking up to find his console living and breathing. His console now has a name, Dusty, and is instructing Rad to pick up a weapon and get going. The very first cutscene pokes a lot of fun at modern games and their insistence on breaking up gameplay with inescapable videos. You can actually skip this, though, so it’s not a bit of humor without self-awareness.

What follows doesn’t really have much of a plot. You basically run and shoot your way through seven levels of varying designs until the game is over. Dusty can also use a melee attack in addition to having access to the “Pixelverse,” but you typically encounter various enemies and seek out four “exit chunks” to unlock the exit and continue on.

The combat mechanics work similar to something like Shadow Complex in that you can aim with the right stick to shoot in any direction you want. You can also just opt to go with the traditional eight directions like older action titles, but having the freedom to swap between the two helps in certain situations. Sometimes an enemy is placed in an awkward position that a diagonal shot can’t reach, so you can just fine tune the aiming and take him out.

I pretty much played exclusively with a gamepad, but the mouse and keyboard controls do work rather well. That fine-tuned aiming can be controlled with the mouse and the game even provides a crosshair to inform you of your shot trajectory. As for platforming challenges, this game doesn’t rely on pixel-perfect jumps, so the lack of analog control over movement isn’t too drastic with a keyboard.

Rad also has access to a few different weapons. By walking through some differently colored glowing orbs, you can gain a flamethrower, a minigun, a laser cannon, or a grenade launcher. These all have a readily displayed ammo count on the gun and dispatch enemies a lot faster than the standard blaster.

The problem I mentioned from the preview builds still exists: you can’t change weapons on the fly. There are still sections where your path is blocked by some boxes and the grenade launcher won’t explode on impact. So you either have properly time your use of Dusty’s melee attack or waste your grenade ammo to get back the blaster. 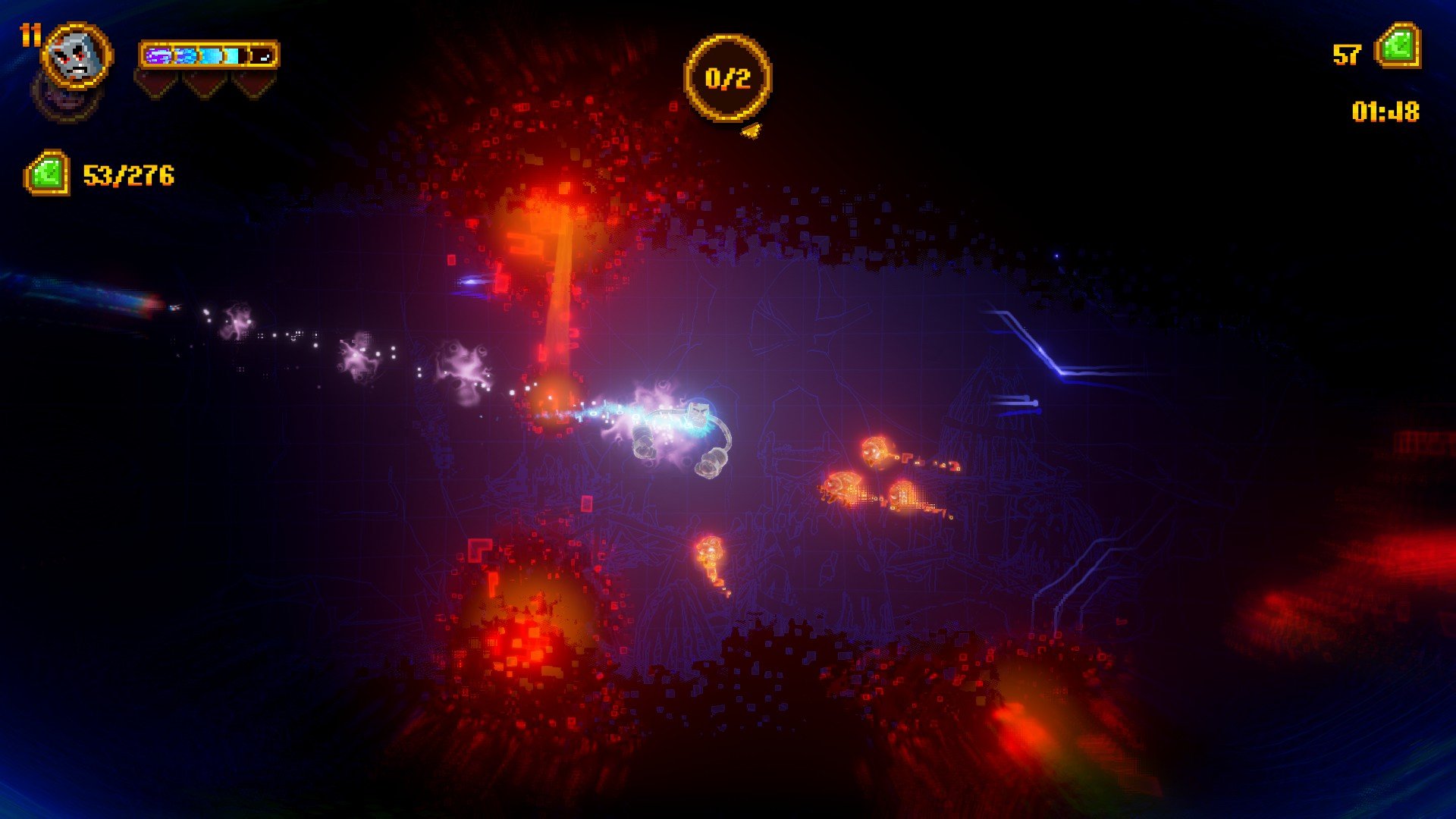 Most of my issues from the earlier builds have been fixed, though. The “Pixelverse” sections for Dusty are a lot faster paced, now. Instead of moving at a slow kick, it seems like a fire has been lit under Dusty’s ass. He practically speeds through the sections almost too fast, but it helps prevent these areas from feeling so out of place like they used to.

There is a ton of visual noise going on in these areas, as well. The edges of the screen are all pixilated and there are various traps swinging about to screw you up. If you run out of “pixels” (Dusty’s form of life), then you get kicked out of the segment and Rad will lose a heart. It adds a punishment for failure in these segments that was lacking in the early-access release and helps give the player motivation to actually do better in those instances.

There were some performance issues in the preview that have all been utterly eliminated. I never encountered slowdown after the official release and the load times are practically non-existent. Going from the menu to the map screen used to take around 15 seconds, but you can get into the action from the start menu in half that time now. 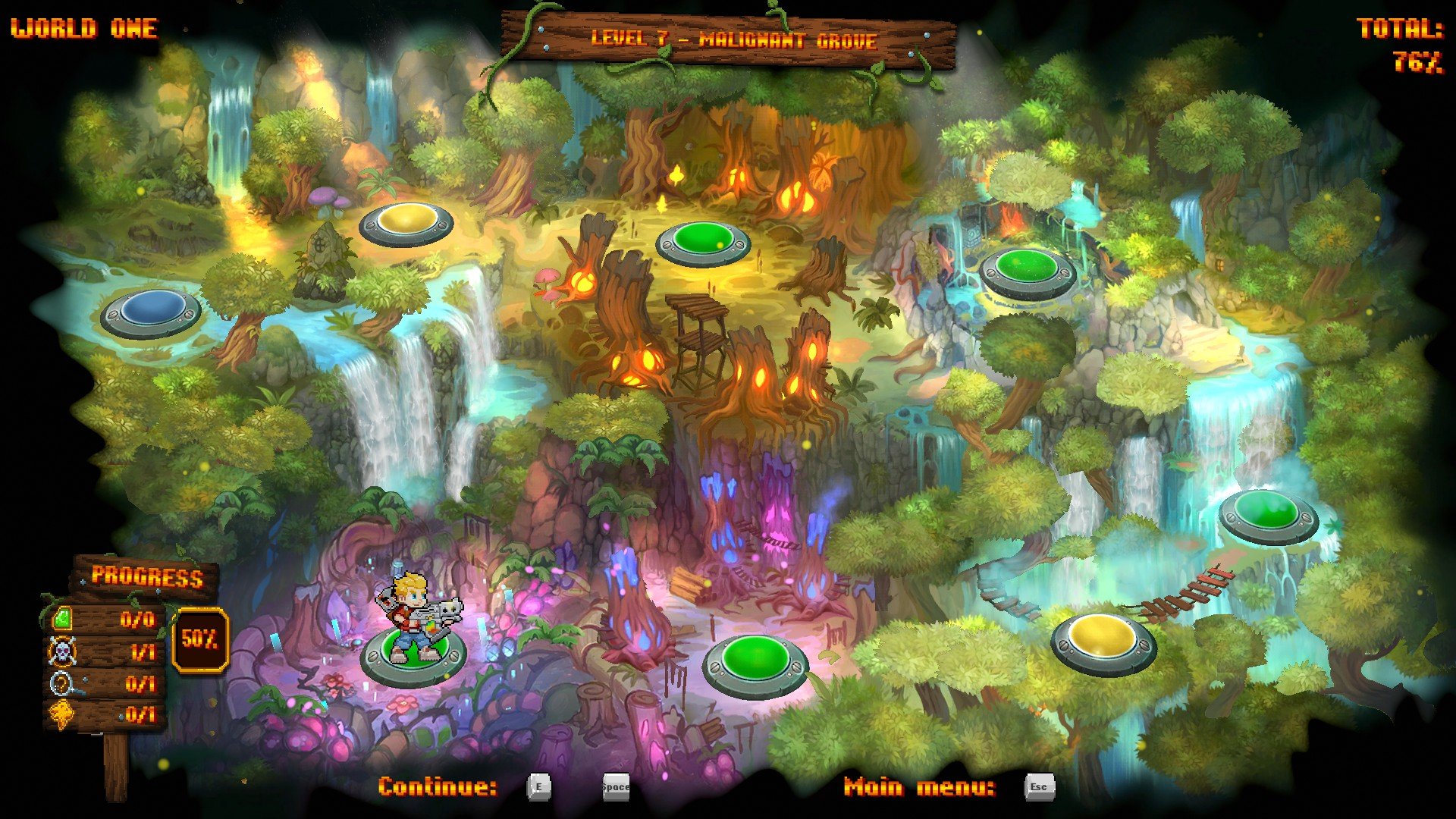 The soundtrack has also been updated to actually include higher-quality songs. I’m still not sure if I possibly just missed the music from the preview build or not, but I definitely hear it in this final version. I won’t call it an outright classic, but the tunes evoke a nostalgic feeling while being their very own creation. I also get a kind of Tron vibe from some of the stuff, which is nice.

A lot of the levels also have general improvements to their flow and structure. More enemies are placed in previously empty areas, moving platforms work at a much faster click, and crumbling platforms don’t disintegrate before you jump on them. It brings a level of fluidity and polish to a game that already had a tremendous amount of it.

Sadly, the last boss feels like a total throwaway encounter. Not only does it have a stupidly large amount of health, but dying at any point during the battle does not refill the items in the level. If you grab that minigun or heart by accident, you just have to deal with it. There is also a rather poor implementation of the “Pixelverse” for this boss battle that comes out of nowhere. 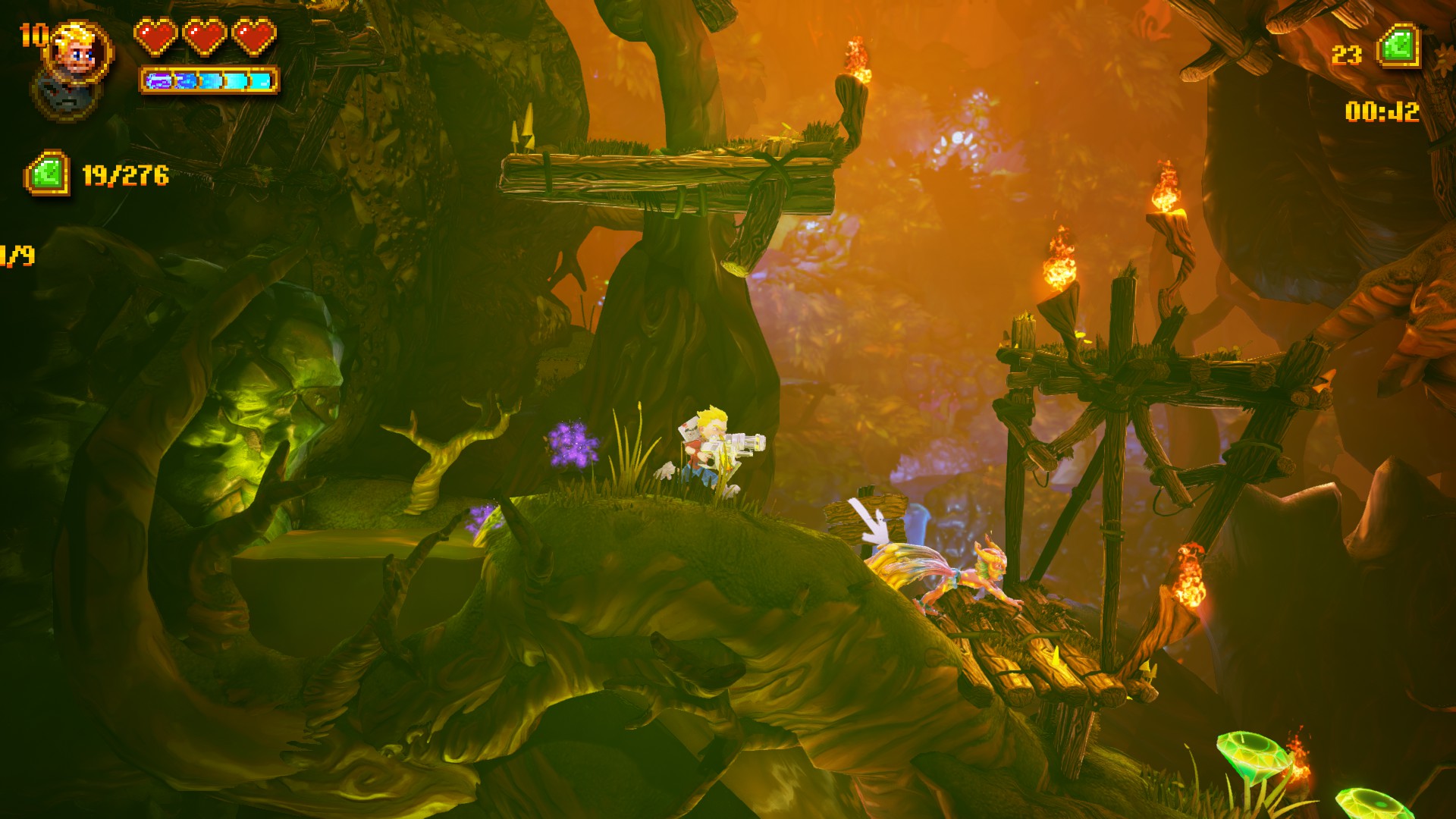 I get the idea behind this was to have Rad and Dusty work together, but the game does a fake out and changes the rules at the very last second. In every previous “Pixelverse” segment, Dusty would hit the corresponding items and be transported out without much delay. For some reason, the final boss decides to chase after Dustry and getting hit will kill Rad. There isn’t a voice over clip to indicate this or any kind of on-screen text, you just have to assume you’re still able to move after dealing what should be the final blow. It feels cheap and thrown in for artificial difficulty.

There is also a general lack of levels, even if six of the seven are solid enough. My main complaint is that there isn’t enough of the game to play, so that isn’t really a knock against how well things are built. I’d just like to see more of Rad, but you can whisk through the proceedings in an hour and you’re left with a cliffhanger ending.

There are various difficulties to pick from and each level is littered with collectibles, but without a truly coherent plot to drive you forward or the rest of the planned worlds, Rad Rodgers: World One ends up feeling like a tech demo. It plays fine, looks gorgeous and runs well, but it abruptly ends and doesn’t even have a guarantee of a continuation. 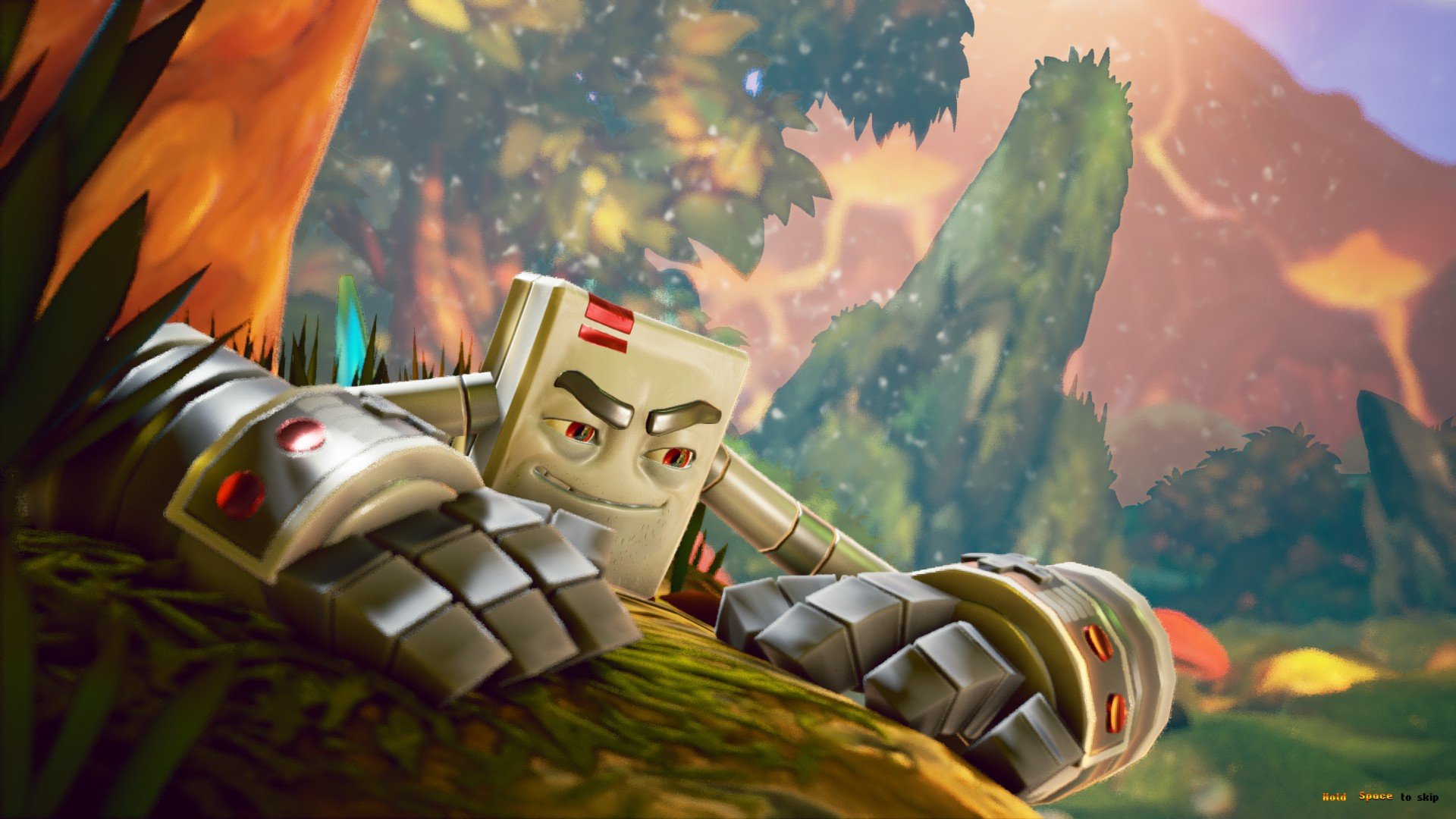 I also need to point out some flaws in the audio samples. John St. Jon voices your sidekick, Dusty, and he does a pretty damn good job, but there really isn’t much variation to what he says. He swears a bit, sure, but you’ll often hear the same repeated clips of, “Jumping on the enemies gets ya hurt,” four or five times in a single level. Also, he starts dropping hardcore F-bombs in the final level out of nowhere, which then become censored in the final cutscene; talk about consistency.

That, honestly, encapsulates how I feel about the final product. It doesn’t maintain a consistent level of humor or balance. Parts of levels are brain-dead easy and then one section might be tough due to high enemy health. The boss fight sucks hardcore and then changes the rules at the last second. There are a ton of collectibles, but they don’t amount to much of anything.

I’m only being so hard on Rad Rodgers because I did really like it. I want to see that eventual conclusion, however many chapters it takes. The slightly lowered price from the originally planned $15 is also a huge plus; I could definitely see six worlds coming out of this and expanding the adventure into a classic MS-DOS sidescroller. Hell, I would be so happy if Duke Nukem made a surprise appearance, what with John St. Jon already being involved. 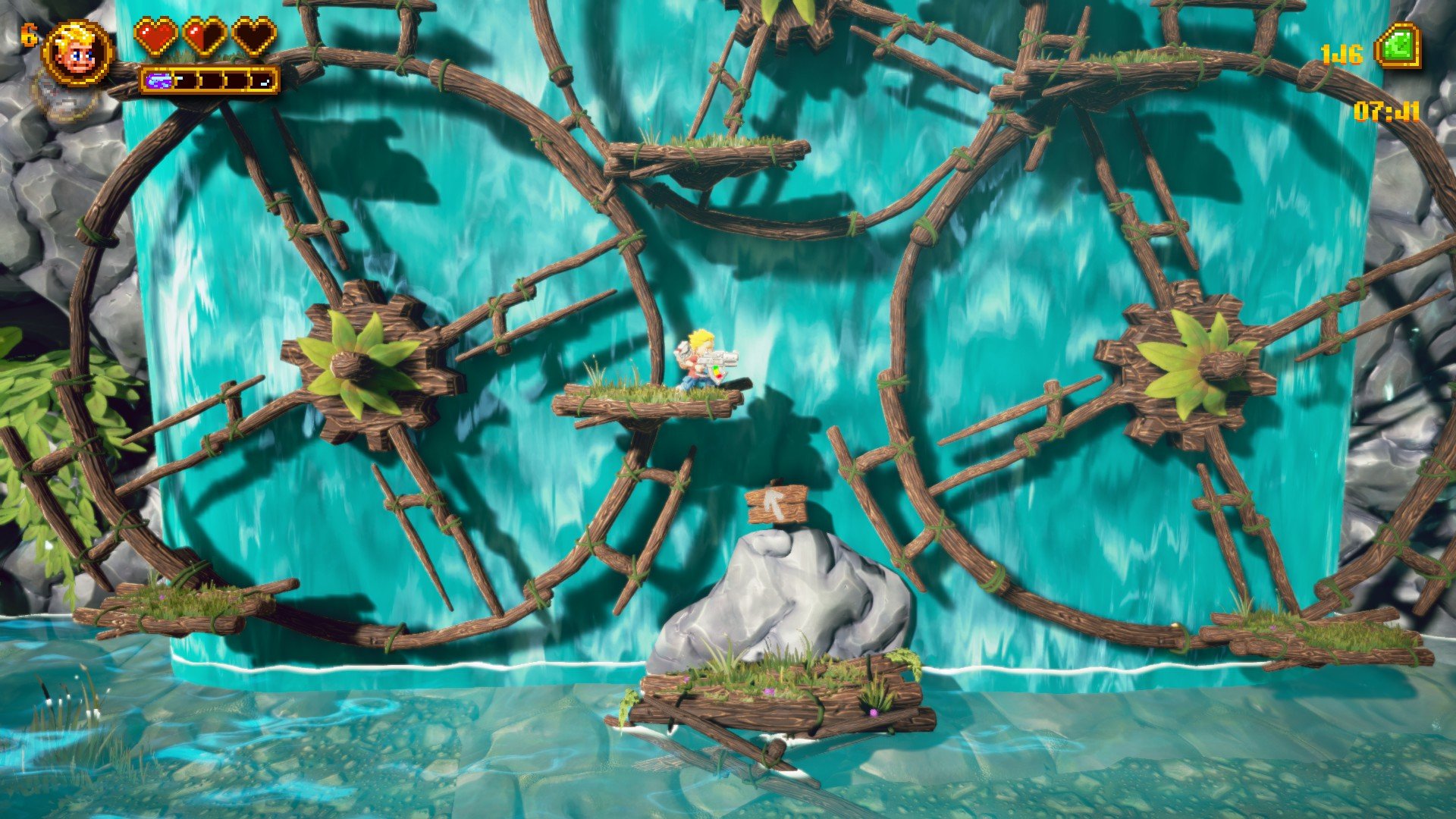 As for whether or not you should grab Rad Rodgers: World One, I’d say give it a go. It may not be the second coming of retro gaming or an outright classic, but it does still have the potential. If Interceptor Entertainment can make this a success, I have a feeling that the eventual World Two and beyond will iron out all of the bugs and turn this adventure into a must play for old-school fans.