Mallo heads to the big screen

People say Nintendo never does anything original outside of Mario and Zelda — but as we all know, that’s absolutely not true. Not only has the company taken chances on wacky IPs all throughout its storied history, but the advent of digital downloads has further satiated its desire to try out new characters and games.

Take the 3DS for example, which rolled out new properties like Dillon’s Rolling Western, Sakura Samurai, and my personal favorite of the bunch — Pushmo. It’s hard to believe that in just three short years there have been three Pushmo games, but all of them are good, even the newest iteration that’s hitting the Wii U for the first time. 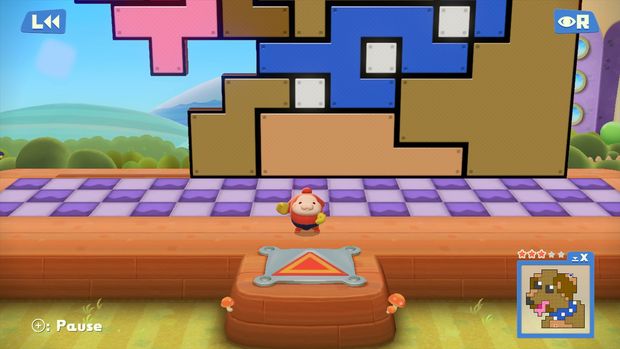 Just like the prior two games there isn’t an elaborate setup here, and developer Intelligent Systems (known for Advance Wars, Paper Mario, and Fire Emblem) is really taking Nintendo’s lead and going the Mario route. Once again you’ll join the sumo-like Mallo on a quest to save children, who are stuck in “Pushmos” — giant block-like puzzles that have to be pulled and pushed to scale.

At first these blocks look 2D in nature and often display a cute pixelated image, but you’ll have to pull out sections little by little (denoted by different colors) to eventually scale your way up the monolith and save the child in each level. At first, things are extremely easy — you’ll pull out ledges that let you jump short gaps and make your way to the goal. But after some practice things get sticky real quick.

With a new platform comes a new way to play, most notably by way of the television screen or your Wii U GamePad via remote play. It’s great that Pushmo World offers both, as I’d often find myself turning off the TV in favor of playing it just like I did on the 3DS previously. That’s not to say that the newly minted graphics slouch though — they look vibrant and extremely smooth on the big screen.

I actually found myself preferring the GamePad as well, since everything feels a lot more natural with more screen real estate to work with. The left analog stick moves Mallo, and the right stick controls the camera, which works slightly better than the previous setup. You can lock the camera if you want, and the full-screen giant zoom looks fantastic. Only a few times I found myself hitting a hidden ledge since the 3D effect obviously isn’t present, but the rewind button helps the frustration factor there.

To help cut down on the madness and keep you playing, Intelligent Systems has brought back the time rewind feature as well as the “skip level” feature from the other games. So if one particular level is giving you guff, you can just move on (albeit without credit) and keep having fun. Likewise, some block puzzles can take upwards of five minutes to solve, and to prevent one wrong jump from ruining the entire elaborate setup, you can just press a button to rewind yourself to the moment before the drop.

Pushmo World has a tiny world map to roam around in, which makes the universe feel alive rather than a tunnel-like set of puzzles accessed through a menu. There’s over 30 training levels to mess around in (making this the most accessible game in the franchise), as well as tiny extras like stamps to browse and even a level creator. 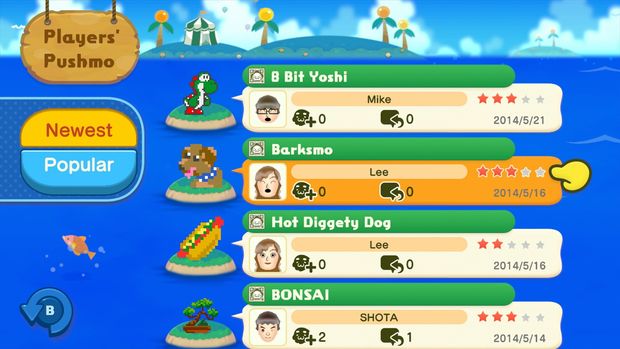 The best part about the editor is that you can interchangeably scan QR codes between the 3DS games and the Wii U version to access new levels, which is a pretty amazing feature. There’s also a “Pushmo World Fair” where you can access online creations, including levels modeled after famous Nintendo characters. The included 250 puzzles should be more than enough though.

Having said all that, there really isn’t a whole lot of new stuff here outside of a few slightly new mechanics later on in the game, such as tricky blocks that don’t follow the normal rules of pushing and pulling, or timed blocks that move themselves. Like Crashmo before it this isn’t an overhaul of the existing formula or even an evolution — just more of it. Though I enjoyed myself I was expecting a bit more from World, possibly by way of power-ups or special moves that allow Mallo to do anything other than jump around.

As much as I love the originals on the 3DS, this is pretty much the definitive version of Pushmo, especially when you consider the fact that the Wii U GamePad makes it semi-portable. So long as you haven’t tired from the core formula yet you won’t be disappointed, and genre-fans who haven’t played the series in general should pick it up.