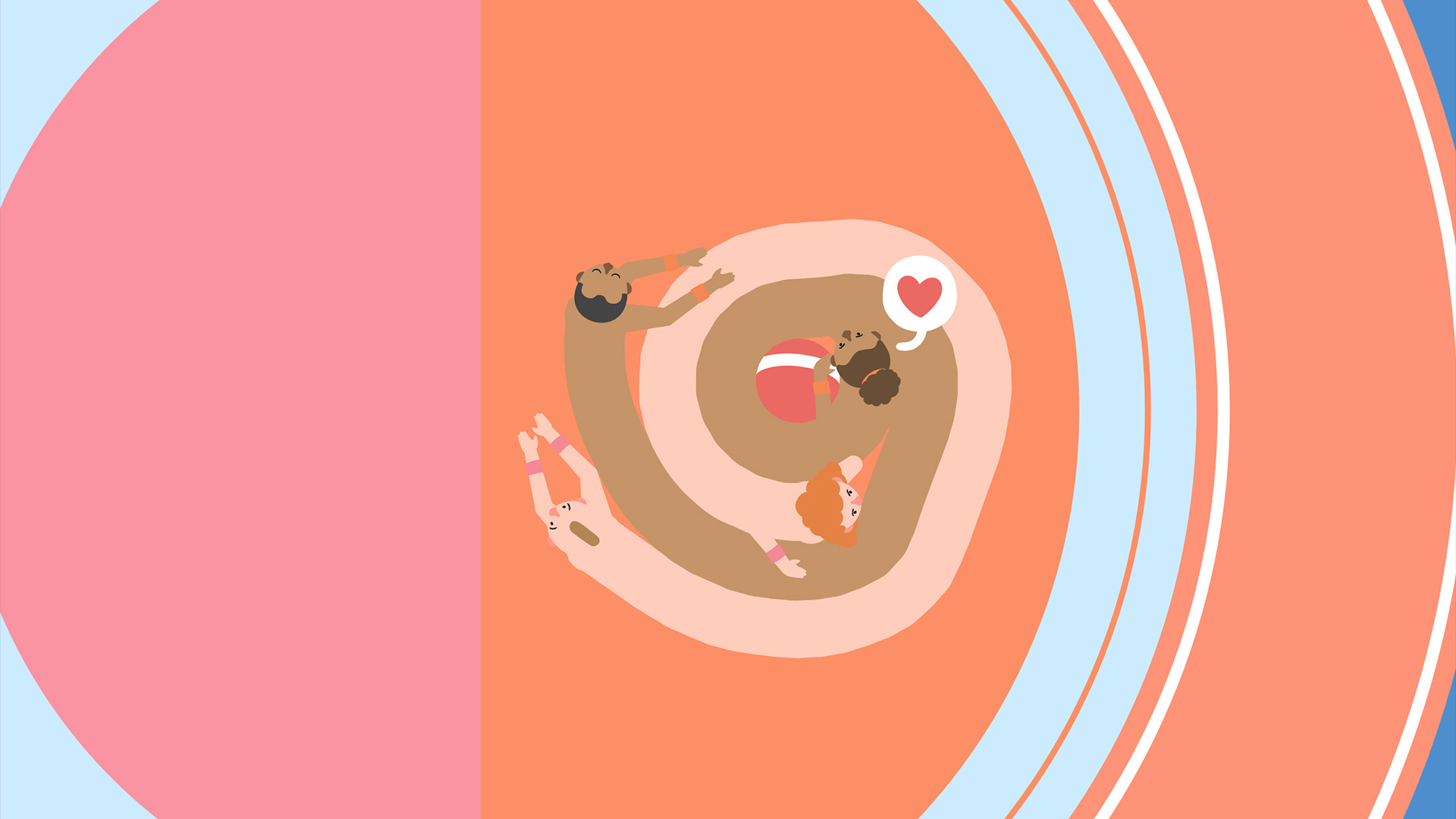 Push Me Pull You is a game about two-headed intestinal worm people rubbing up against each other in the name of good, wholesome sports. While wrestling for control of a ball, they can shrink down to CatDog size for better agility, or stretch way out into a coiled, protective fleshy mess.

It would be horrifying if it weren’t so damn charming and chipper. 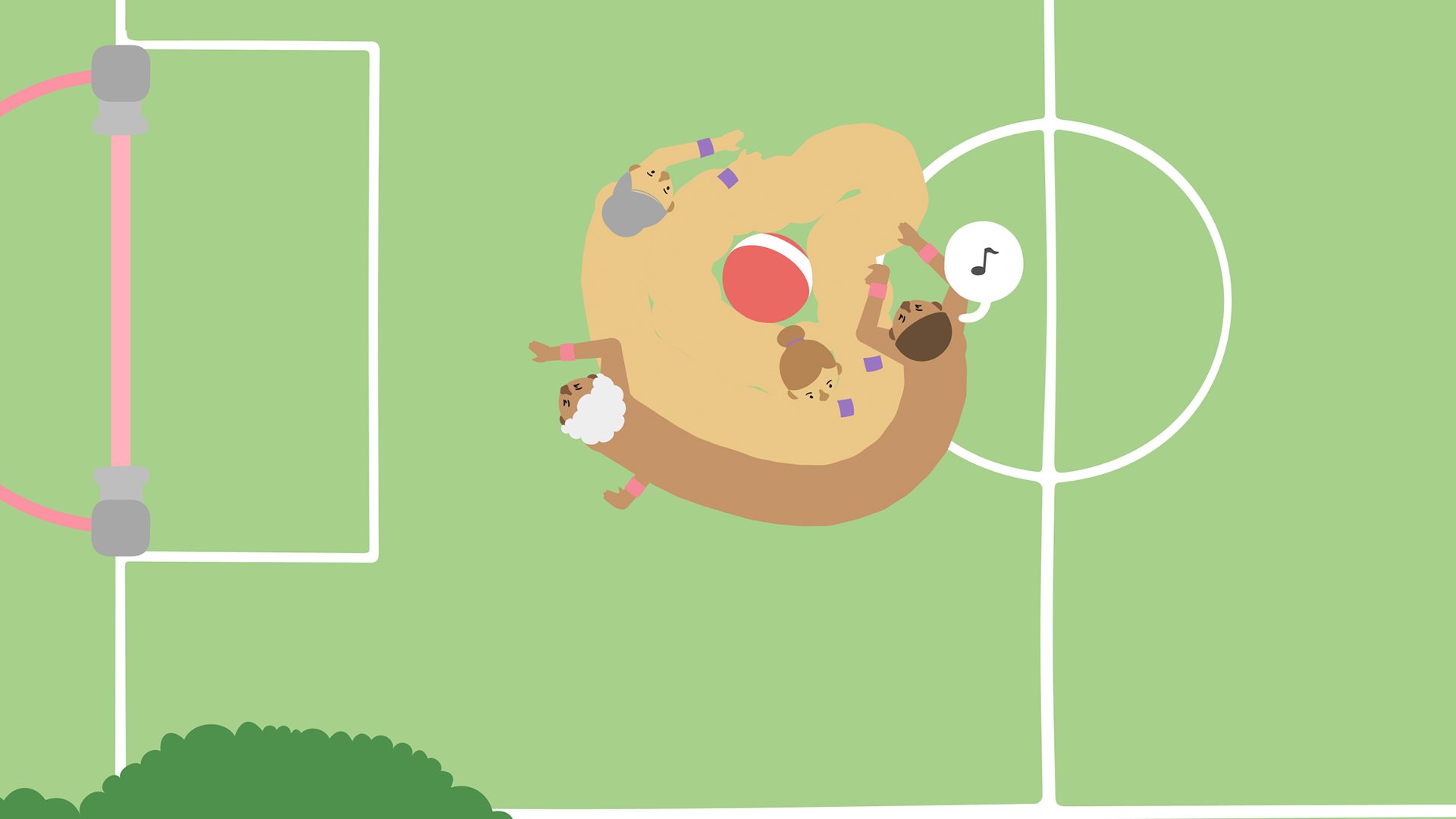 If you’re able to round up four willing participants, that’s the best way to experience Push Me Pull You. Two players in real life is fine (there isn’t online play), but a full group of four is when it feels most alive. Sharing half a gamepad with someone else — one analog stick for each partner — is uncomfortable, unnatural, and just the best. You can’t help but shout out in frustration and happiness alike.

You’ll start out by creating your lovely worm person in the character creator. There are options for hair style and color, skin tone, and team color, the latter of which even shows up on your controller’s light bar. I decided to make an old married couple but, let me say, the more you think about the lifestyles and logistics of these unfortunate beings, the weirder things get. So probably don’t do that.

Before each game, you can freely practice in a training area or screw around for a bit. There’s a functional soccer field, a court like the one you’ll be playing real matches on, and playground equipment. It’s a relaxed way to give new players some breathing room until they figure out the controls and movement (one analog stick per head, and L1/L2 or R1/R2 for shrinking/growing) before competing with their honor on the line. The goal is to wrangle a ball to your side of the arena using mainly your worm-torso, then hold the dang thing there for as long as possible. If the floor completely fills in with your team’s color, you win, but your progress will start to decay while the ball is pushed elsewhere.

Even in a two-person match with one whole controller per player, it can be trickier than expected to steer your conjoined monstrosity with any sort of precision. I mean, it makes total sense: you are a misshapen heap of meat. No one said this would be elegant! The weird-physics-driven chaos is a large part of the fun, thankfully. There are strategies and moves dependent on how short or long you are, to be sure, but there is also this ever-present layer of unpredictability once everyone gets all tangled up. That keeps the game feeling fresh despite its simple rule set, at least for a while.

Several other extra modes tweak the formula but frankly aren’t enough of a departure. In one, half of your monster is asleep, so you have to drag the lazy bum along. It seemingly just exists in case you only have two players available. Another variant of the basic setup has three balls up for grabs, while in Knockout, you have to guard your ball and also work to push the opposing team’s out. My favorite of all is Halfcourt. You shuffle the ball to the edge of the court to gain possession, and then (and only then) can you take it back to the center to score. It’s a real nail-bitter full of last-second saves.

Although that’s about it for Push Me Pull You, I have to stress how exceptionally polished it is across the board. The designers nailed the clean, friendly presentation, and early on, I was so ready to love the game because it makes such a wonderful first impression. But at its core, there’s a lack of depth to keep this from being much more than a fleeting joy. It’s the kind of oddball party novelty you play once with a group, get your fill of, and don’t touch again until the next distant get-together.