One has to hand it to Sony. Of all the “big three” console makers, the house of PlayStation is far and away the most open to risky prospects and new ideas. While Microsoft plays it safe with marketable shooters, and Nintendo has a stable of household names to keep itself propped, Sony isn’t afraid to give us something different.

Puppeteer is one such something. A sidescrolling platformer taking the form of a childrens’ puppet show isn’t exactly a boardroom’s dream concept, but Sony has put its muscle behind the project, and created a game with no small amount of charm.

Even if the result isn’t truly impeccable, its mere existence is worthy of respect. 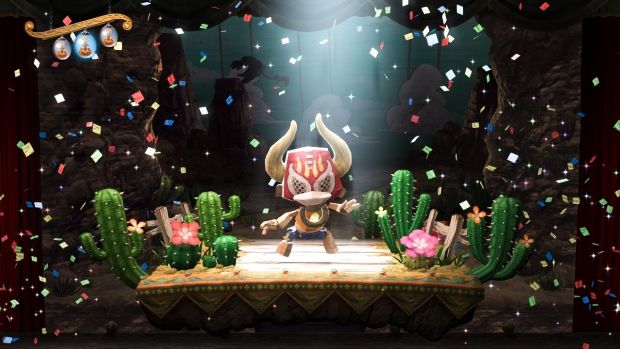 Puppeteer tells the tale of Kutaro, an unlucky boy who has had his soul kidnapped by the Moon Bear King — quite literally a bear that wears a crown and lives on the Moon. Turned into a puppet and ungraciously decapitated, Kutaro is aided by the Moon Witch and a cast of eccentric characters to retrieve a pair magical scissors, Calibrus, and carve his headless way through the Moon Bear King’s generals before defeating the evil monarch himself.

As its name implies, Puppeteer is drenched in the aesthetic of an old fashioned puppet show. Curtains raise and fall at the beginning and end of levels, scenery is held up with sticks, characters appear to be fashioned of stitched cloth and wood, while each screen falls apart and rebuilds itself to signify a chance of environment. The visual result is inspiring, taking the handmade feel of LittleBigPlanet and turning it into something even more remarkable. With a static camera and plenty of things thrown at the screen, it’s also been built perfectly for 3D televisions, something worth checking out.

[Check back here for our official video review — coming soon!]

Gameplay predominantly takes the form of a classic scrolling platformer, with Kutaro running and jumping his way across each stage. The hero is controlled with the left stick, while the right stick (or the PS Move wand) moves his sidekick: either the sinister cat Yin-Yang or the squawking Sun Princess. By moving the sidekick to a piece of scenery and pressing R2, the environment can be interacted with, either releasing collectable Moon Stone Shards (which grant extra lives when 100 are nabbed) or uncovering hidden heads for Kutaro to place on his empty shoulders.

While Kutaro has lost his own head, there are hundreds of replacements hidden throughout the game, from skulls to spiders to christmas trees and even more exotic noggins. If Kutaro takes damage from a trap or enemy, his head falls off, and he’ll have a limited amount of time to collect it (similar to the ring system from Sonic the Hedgehog). Up to three heads can be stored at any one time, and if all three are misplaced, Kutaro will lose a life. A simple enough system, but one that can be tricky, especially with plenty of chasms into which heads may so easily roll.

As well as looking funny, these heads can each be used to unlock things in the game. If the player happens to have the correct head at the correct time, they can perform its special animation with the press of the D-pad and open up a piece of scenery to unlock bonus roulette wheels or even whole bonus stages. Since some of the heads themselves are quite well hidden, and keeping a particular head long enough to have it at the right place is easier than it sounds, it’ll take quite a while to uncover everything Puppeteer has to offer. 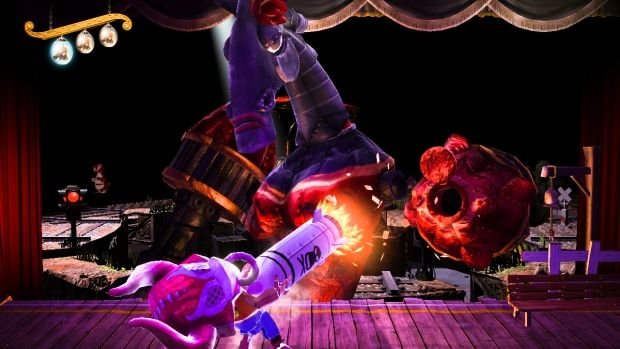 During the course of the campaign, Kutaro will unlock special abilities, the foremost of which being his use of the Calibrus. These magical scissors allow players to cleave their way through the environment, a skill that really opens up the platforming and adds a uniquely keen angle to platform navigation. Various parts of the environments will take the form of cloth or paper, and Kutaro can hammer the Square button near them to literally cut his way through, defying gravity to cleave a path up paper plumes of smoke, or snip past blockades. The scissors are also put to use against the Weavers — mini-boss monsters with cloth bodies that must be cut into pieces before they’re defeated.

As well his magic scissors, Kutaro will also gain the power to reflect attacks with a shield, toss ninja bombs, move heavy objects and perform power slams, all thanks to unique heads uncovered as part of the plot. These abilities all conspire with Calibrus to create some smart puzzles and navigational hindrances, and while nothing is ever so puzzling as to truly stump the player (one gets the impression this is all designed with children in mind), there is some pleasure in seeing just how inventive Sony Japan has been with a few simple and familiar platforming tricks. 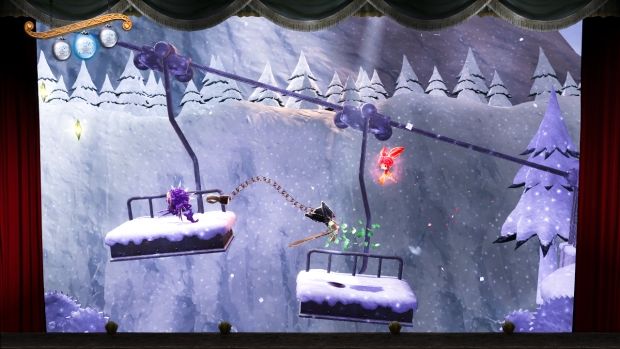 Puppeteer boasts great gimmicks and provides solid sidescrolling action, but it does suffer from a slow pace at regular intervals. Even some of the faster moments, in which you ride on the back of some sort of animal/vehicle in stages reminiscent of Sega Genesis’ The Lion King, there’s no real sense of speed to the game, and things that could be far more exciting very often fail to generate so much as a raised eyebrow. I enjoyed much of my time with the game, but I can’t say it ever overwhelmingly delighted me — indeed, I was blank-faced for much the experience, navigating a slow character through fairly innocuous and formulaic stages, biding my time until more clever stuff happened.

The action also finds itself subject to the same kind of watery physics seen in spiritual cousin LittleBigPlanet. While not nearly as bad as Media Molecule’s games, the tendency to put exuberant animations and exaggerated movements over and above tight controls leads to some jumping sections that feel off-base, especially during those rare moments where precision might be needed.

Fortunately, the game ramps up the thrill factor in its large boss battles, which manage to be visually busy without growing distracting, and play the “puzzle boss fight” card to the hilt. Boss encounters generally revolve around the classic system of waiting for an exposed weak point and making the attack, but the use of the Calibrus to cut one’s way to said weak point makes each fight feel far more involved than it otherwise might be. It’s remarkable just how varied these battles can be, despite only a limited number of actions available to the player, and it’s the kind of invention that really helps make Puppeteer stand out from the crowd. 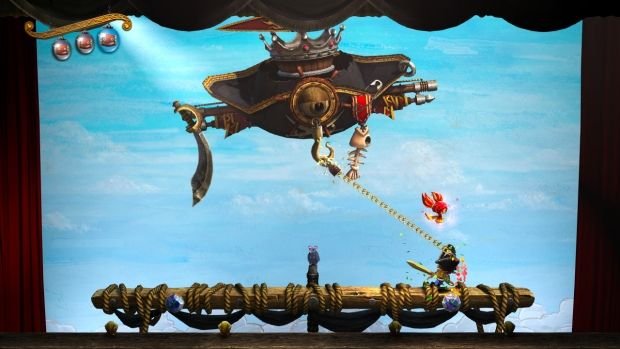 Though the graphics are impressive, and bursting with an array of gorgeously clashing color, the audio presentation is less consistently brilliant. The music is fantastic, but the voice acting predominantly grates, bursting with the kind of stereotypes and squealing that haunt the ears of anybody whose kids watch too much Nickelodeon. Children may indeed be delighted by the overacting and perpetually unfunny jokes, but most sane adults may want to claw their brains out after hearing a few characters talk. That said, a number of the Moon Bear King’s generals are quite amusing to listen to, especially the Rooster who appears to be taking a subtle stand on his transgender rights.

Above all, I’m most charmed by how honestly Puppeteer wears its influences on its sleeve. From classic platformers like Mario to more recent excursions such as Rayman Origins, Sony Japan’s sidescrolling adventure is littered with nods to the very best in platform gaming — a genre so criminally underused these days. This is a game that truly loves the classics, and isn’t shy from displaying that love while providing its own individual style. 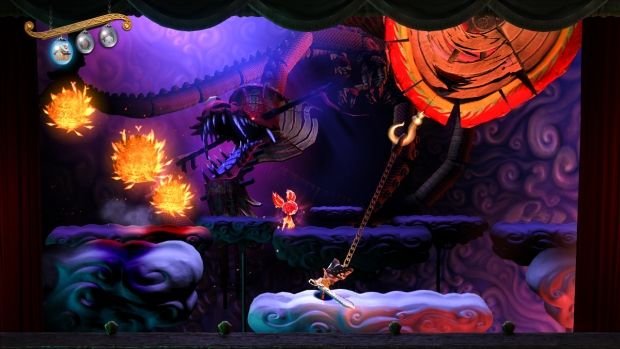 Puppeteer is a bold move for a company as big as Sony, and its presence on the PS3 is welcome. It’s worthy of praise that a brand new game property — a classic platformer no less — would get a full retail release this close to the end of the console’s life cycle. It helps, of course, that Puppeteer is also a genuinely fun game, one that is marred by its sometimes sluggish pace and tendency to be annoying rather than funny, but overall provides some much needed ingenuity at a time when videogames are ramping down in time for the next generation.

While Puppeteer is far from a system seller, anybody with access to a PlayStation 3 could do far worse than taking this little charmer out for a walk.