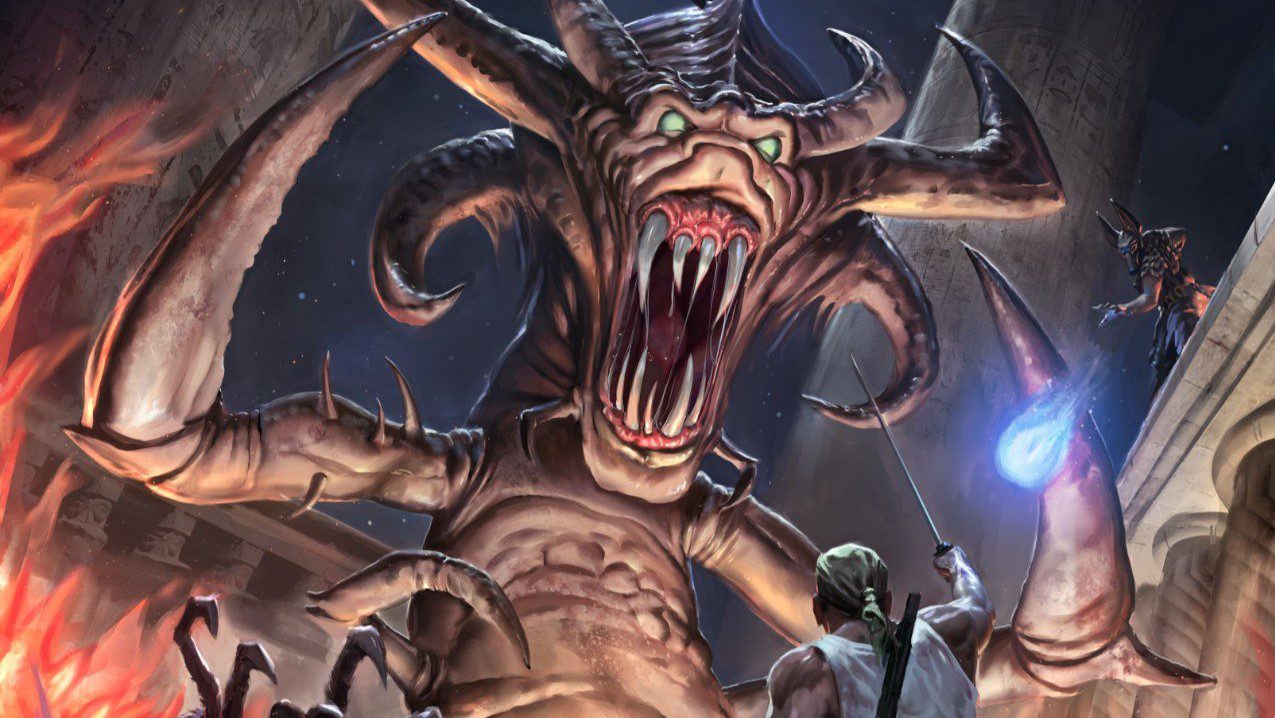 Tell me why I had to be a Powerslave

I’m somewhat surprised I’ve actually heard of PowerSlave. Best known for its Sega Saturn version, PowerSlave was a 1996 FPS that had a mixed reception. Of course, it was released the same year as first-person heavy-hitters Quake and Duke Nukem 3D, and I feel bad for any shooter that tried to compete with those two.

However, if you’re as obsessed with ‘90s FPS games as I am, eventually you dig past the glowing examples of the genre and find what’s hidden beneath. Does that mean I played it on the Sega Saturn? No. Have you seen the price of it?

Thankfully, the people at Nightdive Studio are experts at excavation. They’ve dug up the console versions of PowerSlave and mashed them together into one definitive edition, PowerSlave Exhumed. This is important because the MS-DOS version was rather deficient in a lot of ways, having been moved to a quasi-3D engine and had a lot of its defining features stripped away. Nightdive knows what it’s doing by sticking to the Saturn/PS1 versions. PowerSlave Exhumed is ‘90s as hell. This big head of King Ramses shows up and is like, “Listen to my awesome, clear voice!” He tells you that the valley of Karnak has been invaded by a group of maybe aliens called Kilmaat. They’ve been up to mischief and have been sucking power out of Ramses’ mummified remains. Or maybe they’re trying to resurrect him to take over the world, I was distracted by how awesome this big floating head looks.

What that basically means is this FPS is Egyptian-themed. Unique among other shooters until maybe 2001’s Serious Sam: The First Encounter, but not one that offers a tonne of variety in environments. Or enemies for that matter.

Where PowerSlave Exhumed is truly unique is in its format. Rather than a progression of stages, some levels have multiple exits that you can keep track of on a world map. Some exits are blocked off until you have one of the items of power that give you additional abilities. That may sound a bit like a Metroidvania, but it mostly amounts to backtracking. Try to make note of where you saw that green energy door since you’ll need to remember it for when you have the item that lets you pass green energy doors. Otherwise, you might just keep searching the levels that still have slightly transparent arrows on them until you find the one with the obvious secondary exit.

Still, it gives a slight veneer of exploration, but I’m serious about the backtracking. On top of the items of power, you also have to find parts of a transmitter and health-expanding ankhs. Sometimes these are placed in spots that you obviously need a specific power for, but you won’t have it yet. This means going back through the level later, and you’re lucky if PowerSlave Exhumed doesn’t block off the entrance and require you to go through the entire level again. The levels are, at the very least, reasonably well done. They don’t quite meet the level of creativity seen in Duke Nukem 3D or Doom, but by now, I hope you’ve set your expectations below those classics.

Which isn’t to say that PowerSlave Exhumed is bad. It’s an entirely serviceable key-hunt FPS. It’s just that every time I try to think of something nice to say, a complaint comes out instead. Watch this:

One interesting feature of PowerSlave Exhumed is its health and ammo system. Rather than each weapon having its own individual pick-ups, you pick up blue orbs that fill the reserve of whatever weapon you have selected. This is fine, in theory, but then you run out of ammo for your machine gun and switch to the flame thrower. Now every orb you pick up goes towards topping up your flame thrower, and the only way to get more bullets in your machine gun is to swap back to the depleted gun and walk over an orb. Try not to forget which guns are empty, or you might not have that staff when you really need it. Your primary means of getting orbs is from breakables that change from environment to environment. However, their contents are entirely randomized which leads to a lot of feast or famine situations. Sometimes, the gods of random pickups will bestow upon you oodles of ammo. At other times, every pot either explodes or contains wasps and you can go screw yourself. Seriously, your fortunes can change just by reloading a checkpoint.

You see? I can’t help it. PowerSlave Exhumed is just a bit lackluster at its core. I’d say I had fun with the bosses, but then I’d have to add the caveat that they’re like any other ‘90s FPS boss: You circle strafe them, unloading your weapons until they die.

Hold on, I have one unambiguously good thing to say about the game: the level exits are camels that just sit there. It could be a level in a volcano, and there’s a camel waiting for you at the end. When you bump into it, it grunts. One level, you find a camel behind a breakable wall. Just sitting there. Those camels are awesome. Another great thing about PowerSlave Exhumed is Nightdive’s port to the Kex Engine. It allows the game to run on modern systems but leaves all of the warts unmolested. There’s no intrusive texture filtering or redone sprites. It’s true to the original without forcing your monitor into a 1024×768 resolution.

I’ll go further than that with the praise. When I’m Ultra-Empress of the Universe, every game that passes its 20th anniversary will be handed to Nightdive to be ported to modern systems. I don’t think there’s anyone more respectful or skillful with their remakes.

Even still, PowerSlave Exhumed isn’t the best way for them to demonstrate their talents. It’s a capable shooter from the ‘90s, and as much as I have to complain about, there isn’t anything truly egregious about it. And it’s fine that it isn’t the best game — it deserves the same care when it comes to porting as any other game. Just seeing it get another chance warms my heart, even if it doesn’t quite itch my trigger fingers.