Can you believe I’ve never really gotten into Quake? Doom was a significantly impactful game for me as a child. I’ve played Wolfenstein 3D multiple times, and I don’t even like it that much. I’ve touched Quake. My uncle at least had the shareware. I’m pretty sure I rented the N64 version. I never really sat down to play through it, though.

It’s one of the more impactful ‘90s shooters. It was the last game of the classic id Software lineup before folks like Sandy Petersen and John Romero left. Its engine was an impressive effort to get smooth 3D visuals on PC at a time before 3D accelerators were widespread. It’s not one to overlook if you want to understand the evolution of PC shooters.

I just never took the time to get Quake working on my modern hardware. I would need to shove it into a source port, and there doesn’t seem to be one that is clearly the best. It makes me tired just thinking about it.

Then suddenly, we’re given a remaster. Thanks, NightDive Studios! I can finally play Quake how I want to. I can even play it on my Switch! 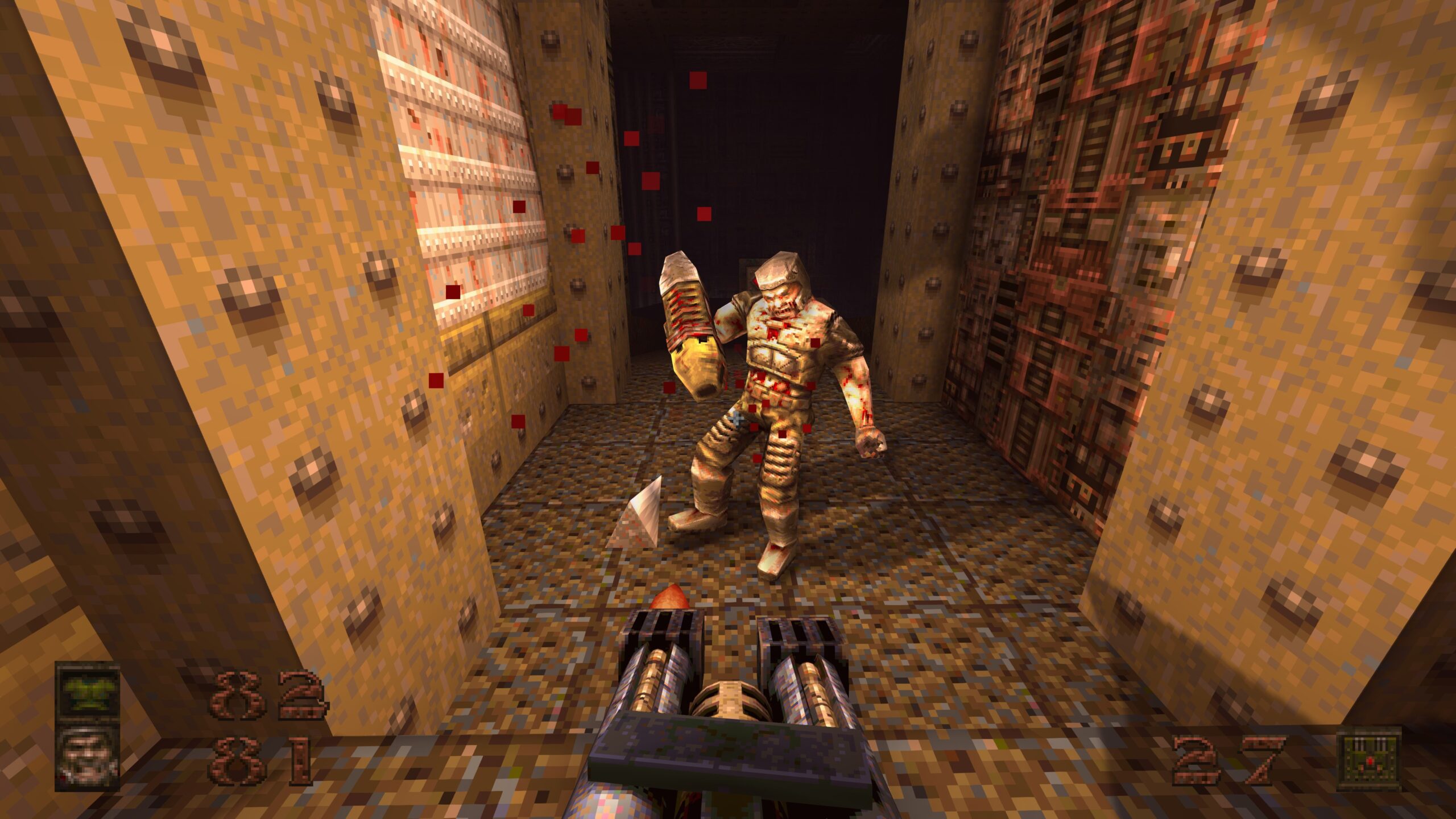 The narrative of Quake is the timeless story of some military dude fighting monsters. It’s basically like Doom, except more Lovecraft and less Satan. Like Doom, development started out with a lot of big ideas before someone said, “Okay, but what if we made it fun?” and it was spoiled down to the bare essentials of shooting dudes.

Is it fun? Was Pickman a painter?

Yes. If you haven’t read Lovecraft, the answer is yes. It was Pickman’s Model, and it’s one of my favorites.

It was hard for the id Software guys to do wrong, and they were doing what they did best: pushing technology and using it to let you blast horrors. It’s dead simple, with most of the technique being in staying mobile. A speedrunning community would later flourish around the game and the unorthodox skill of rocket jumping, but if you’re just looking to see the credits, it rarely gets more complicated than just blasting whatever is in your way. 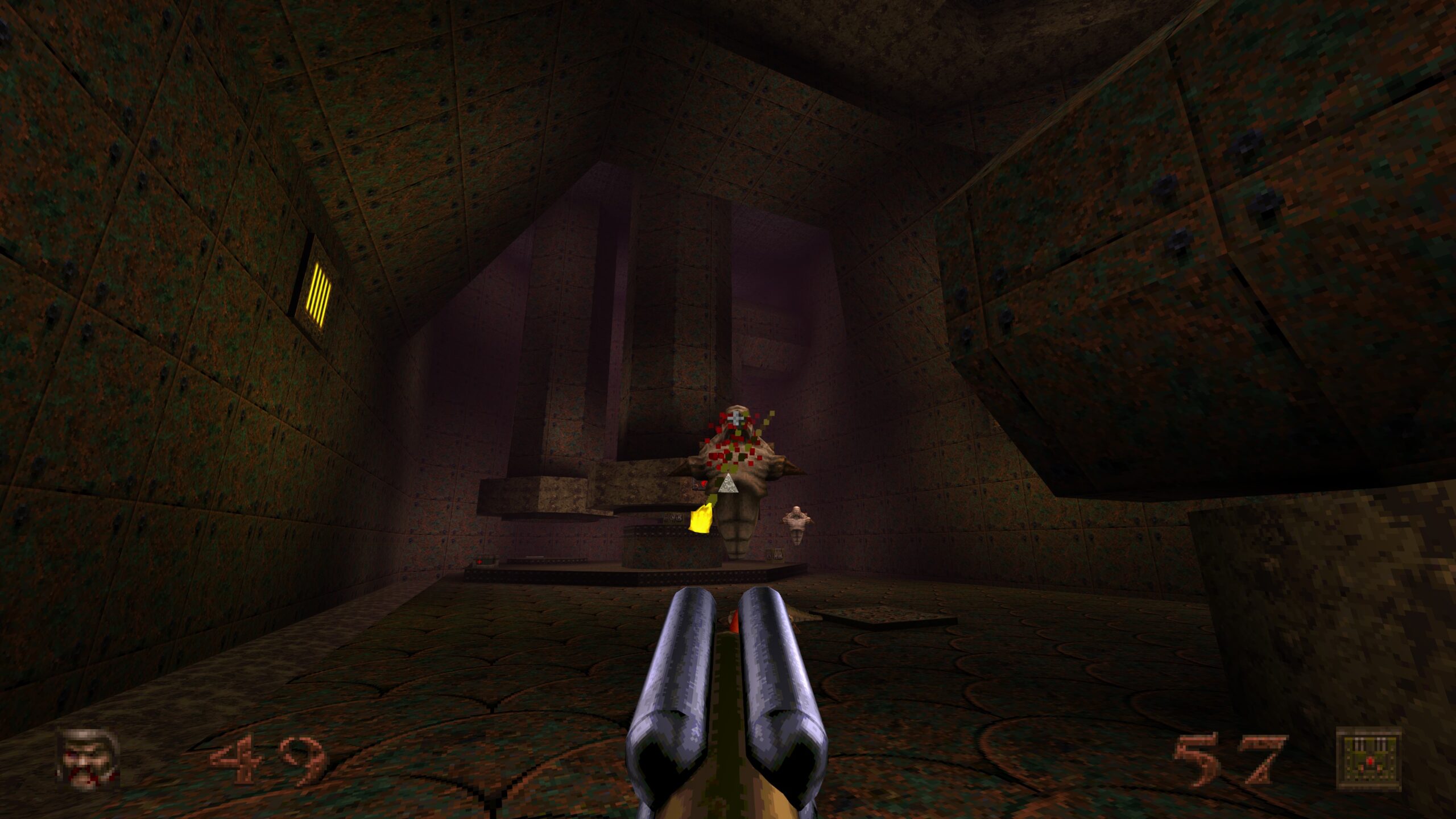 The remaster does a number of things. It has moved Quake to the Kex Engine, adding graphical effects like real-time lighting and ambient occlusion. Moreover, some of the models have been given a slight upgrade, and while it usually gives me pause when updated models are jammed into an old game, they fit so well that I never got the impulse to turn them off. The option is there, however. If you want to turn off all the fancy effects and play the game like it was in 1996, that’s absolutely an option.

It also bundles the expansions Scourge of Armagon, Dissolution of Eternity, and 2016’s Dimension of the Past. Alongside it is another expansion developed by Machinegames, Dimension of the Machine. It’s a whole lot of Quake.

There’s a lot of variance between the different expansions, as well. Okay, maybe I shouldn’t oversell it. One of Quake’s weaknesses is that the levels are all very thematically similar, but certain episodes make more use of one enemy set or level theme than others. The starkest is Dimension of the Machine which ties in a great deal of modern design complete with relatively complex environments. While there may be some weaker parts of the package, the fact that they’re not just all the same makes playing through them worthwhile. 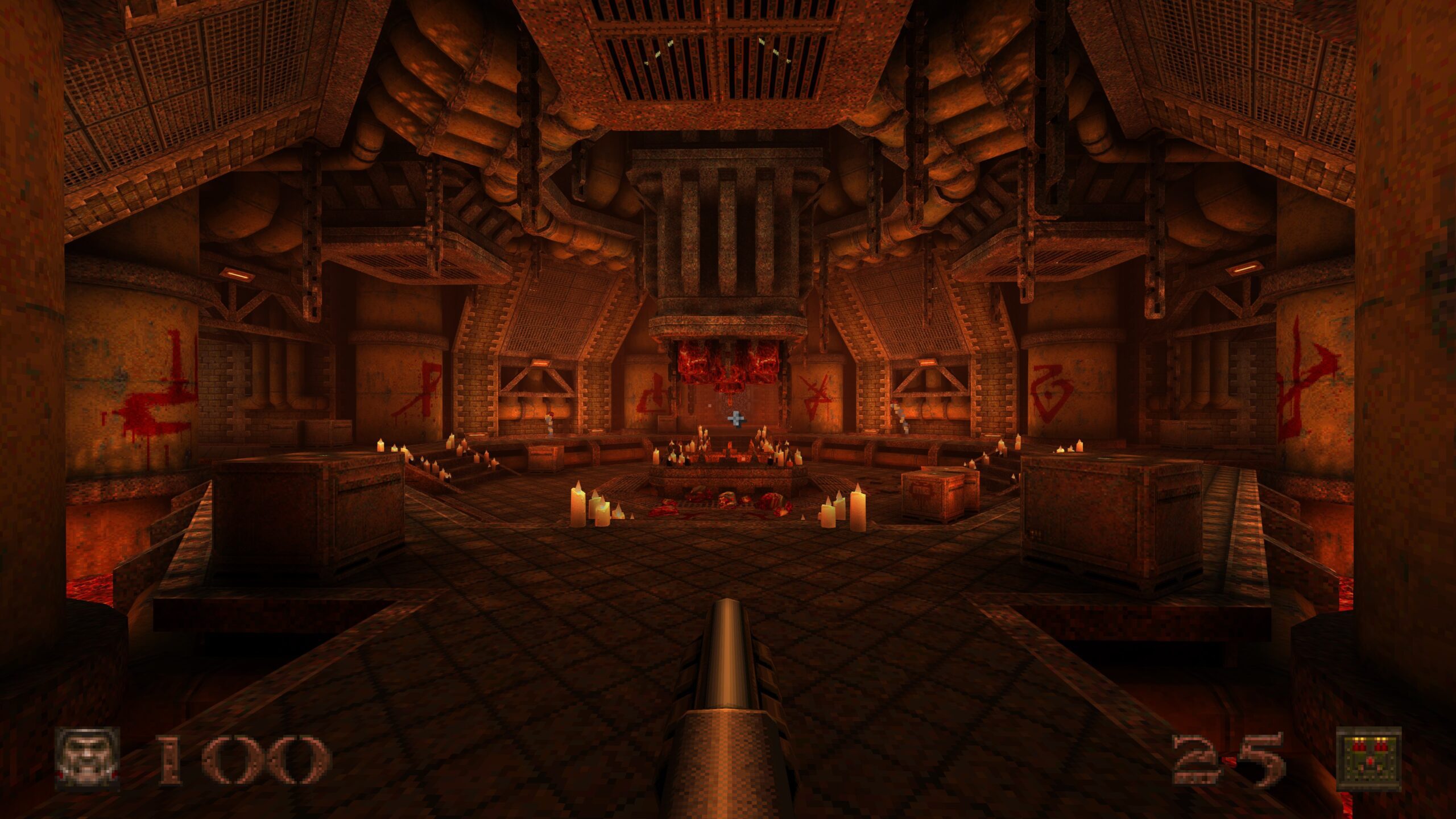 Indeed, I think my biggest gripe with Quake is that there isn’t a lot of variety when compared to something like Doom, which was already lacking to begin with. Weirdly, the addition of jumping didn’t lend to a greater feeling of verticality. The levels aren’t exactly interchangeable mechanically, but they certainly are aesthetically.

It’s likely due to the troubled development. While the team was focused on putting out a fun product, there were complaints about a lack of leadership. The central concept of Quake changed so many times throughout its creation, that it’s no wonder it’s a mash. Lovecraftian monstrosities, cyborgs, and demons all attack you against backdrops of medieval castles, sci-fi military bases, and crumbling ruins.

It makes it kind of feel like Quake doesn’t really have an identity of its own, but that generally gets lost when you’re tearing through levels. The fact of the matter is it’s fun, even all these years later, because sometimes you just want to blow things into chunks and the set dressing is pointless. 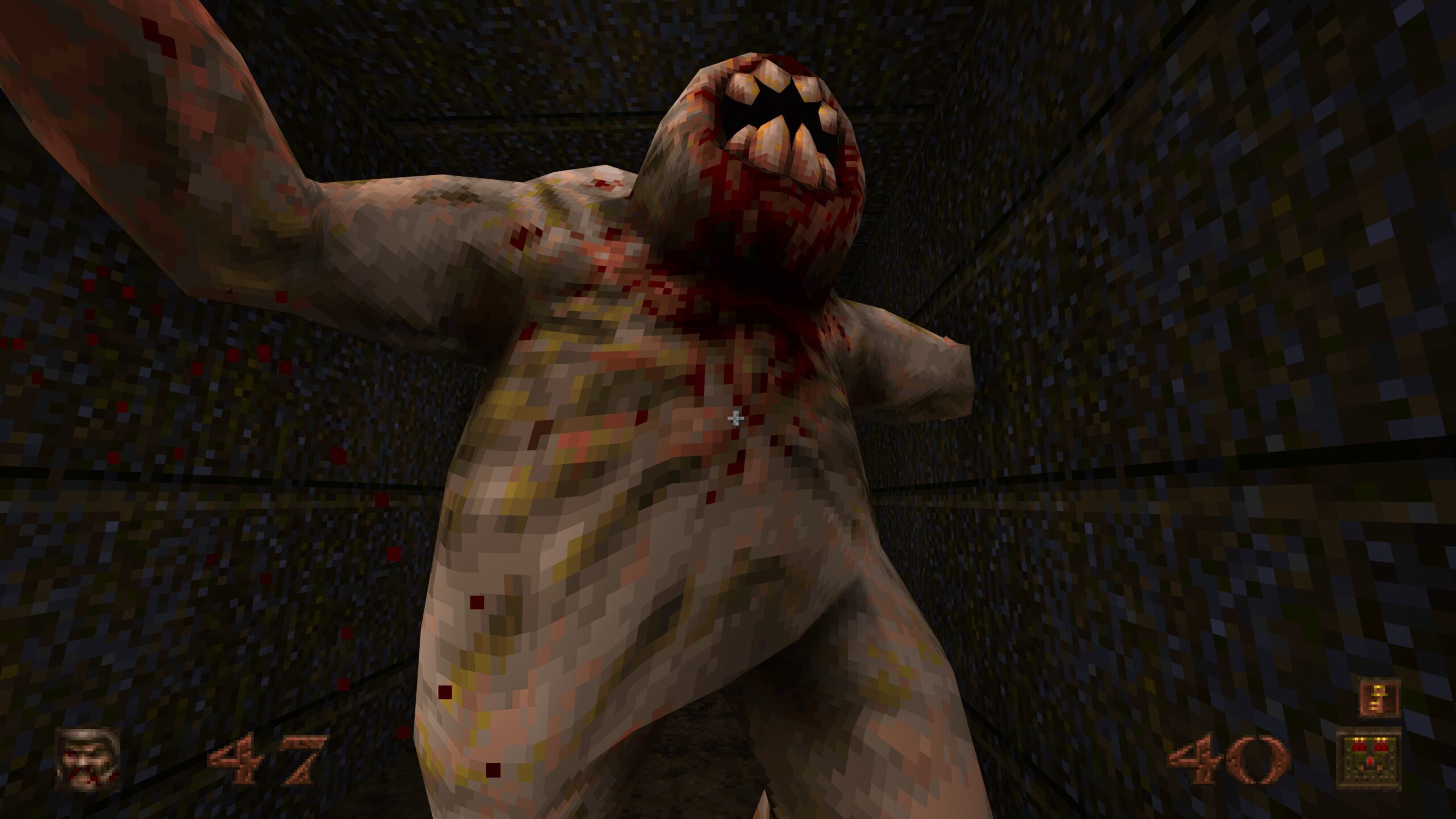 If you’re down for it, there’s also multi-player both split-screen and online, both co-operative and adversarial. I personally don’t feel like getting destroyed by people who have been playing for 25 years, but the option is there for people who do.

There are also going to be add-ons, not unlike what’s going on with the Doom console ports. Essentially, these are curated mods that are being made available. The only one to start out is Quake 64, which is slightly underwhelming. I mean, it’s a nice addition because there were some merits to the N64 version, I just wouldn’t play it back-to-back with the original. They’re too similar.

My first actual full playthrough of Quake was a pretty enjoyable experience. Not only is the port a solid effort, even going above-and-beyond of what’s expected, but it’s also still a great game. Maybe not Doom great, maybe not even Duke Nukem 3D great, but there’s room in this world for all sorts of flavors of ‘90s shooter.