Nightdive Studios does important work. Sure, there are a lot of companies out there that are all about remaking and remastering old games, but few of them dredge the bottom of the swamp for games that lay forgotten by time. It’s one thing to resurrect a game that was near and dear to many, but it’s another thing to dust one off that a lot of people may have missed out on. Not everyone remembers Strife or Forsaken, but they’re no less deserving of a remaster than, say, Kingdom Hearts.

This time they’ve dug up a body that I recognize, but I swear I don’t know how it got there. Shadow Man is a 1999 game from Acclaim that landed on the PC, N64, PS1, and Dreamcast. I recall seeing it on the rental shelf enough that I at least remember it, but I think it was too out there for my young mind, so I never picked it up. This is my first visit to Deadside, and I almost wish I dropped in sooner. 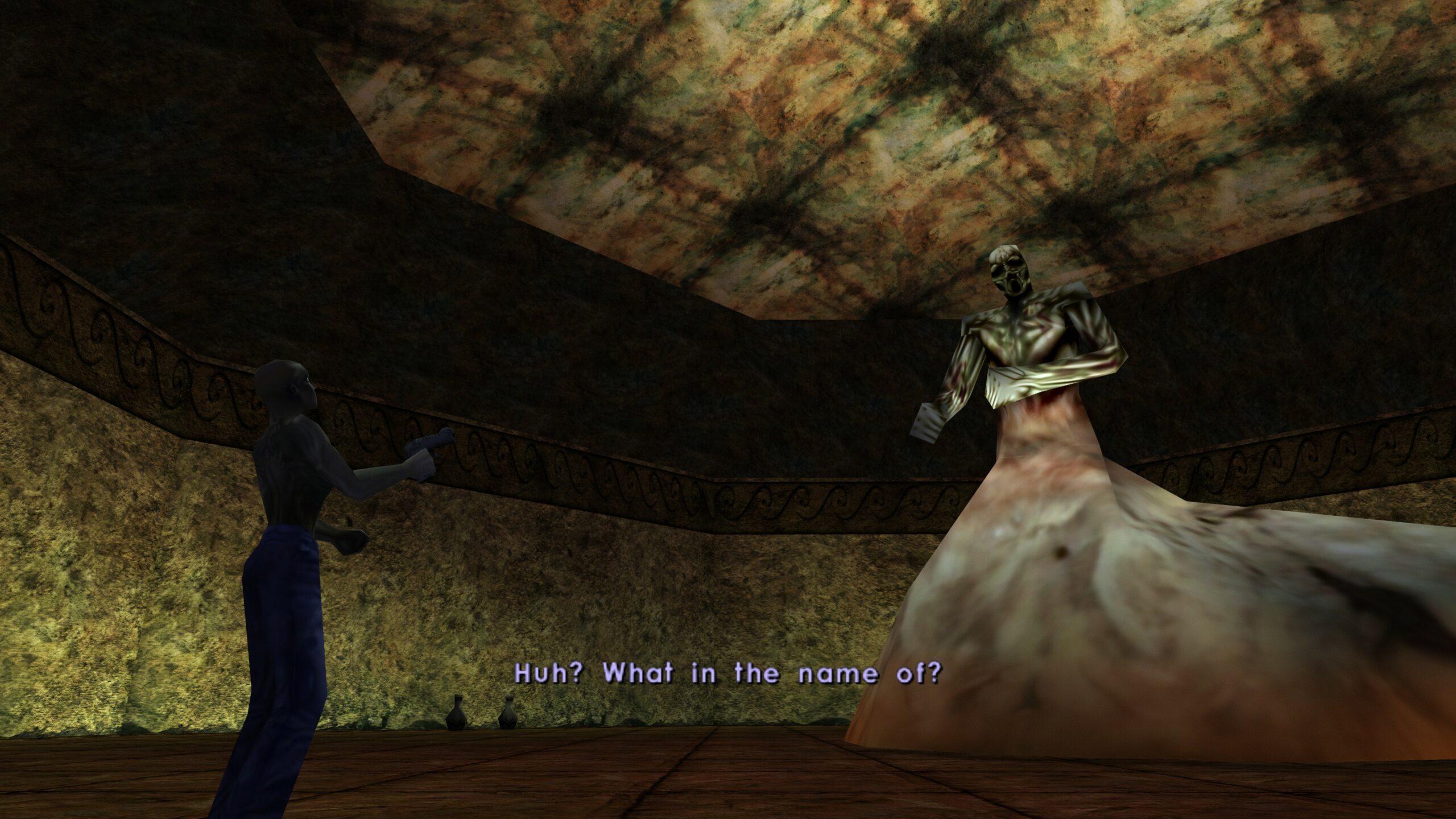 That’s not to say that Shadow Man had a bad run. It’s based on a comic series that was somewhat popular at the time, it was reasonably well-received, and it sold enough to warrant a sequel on PS2. However, it’s not exactly considered top-shelf these days and it largely languishes in obscurity.

The story follows the exploits of the newest “Shadow Man”, Michael LeRoi, who had a spooky mask stitched into his ribs by a voodoo priestess, Mama Nettie. As Shadow Man, he is tasked with using his voodoo powers to protect the world from Deadside, which is apparently where everyone goes when they die without exception. One night, Nettie has a prophetic dream about someone using the “Dark Souls” to build an evil undead army and invade Liveside.

It’s not the best plot, and it raises a few questions, but it works for video game purposes. The dialogue is often poetic, occasionally trite, and sometimes amusing. Mike is voiced by a guy who goes by the moniker of Redd Pepper, and he absolutely hams it up in the most amazing way. The voice cast in general is pretty eccentric, but it works for the campy pulp feel the game is gunning for.

In describing Shadow Man’s genre, I’d say it belongs in the platformer file, because claiming it is any sort of action game would be embarrassing. The combat is absolute butt. You mostly shoot at enemies with this slow little gun that barely looks like it’s doing anything at all. You can charge it, but it’s hard to tell you’re doing more damage, because the only time you see an enemy react is when they double over, signaling that you can deliver the finishing blow and eat their soul. There are other weapons you can pick up which are… fine. They don’t really change the fact that you just blast away at an enemy until they die.

Really, the game has more in common with collect-a-thon platformers like Banjo-Kazooie. It’s largely exploration-based, and you spend most of your time collecting heart-like cadeaux to increase your health and Dark Souls to increase everything else. You need a certain number of these Dark Souls to pass through doors, which largely exist to regulate your progress.

The world design is largely similar to explore-’em-ups like Metroid, where everything is interconnected and you make progress by powering up. There’s 120 Dark Souls and 666 cadeaux, which means it’s a good time to mention it’s a pretty hefty game. Somewhere north of 20 hours, so long as you can stay out of the lava and it doesn’t crash with the same frequency that my version did. 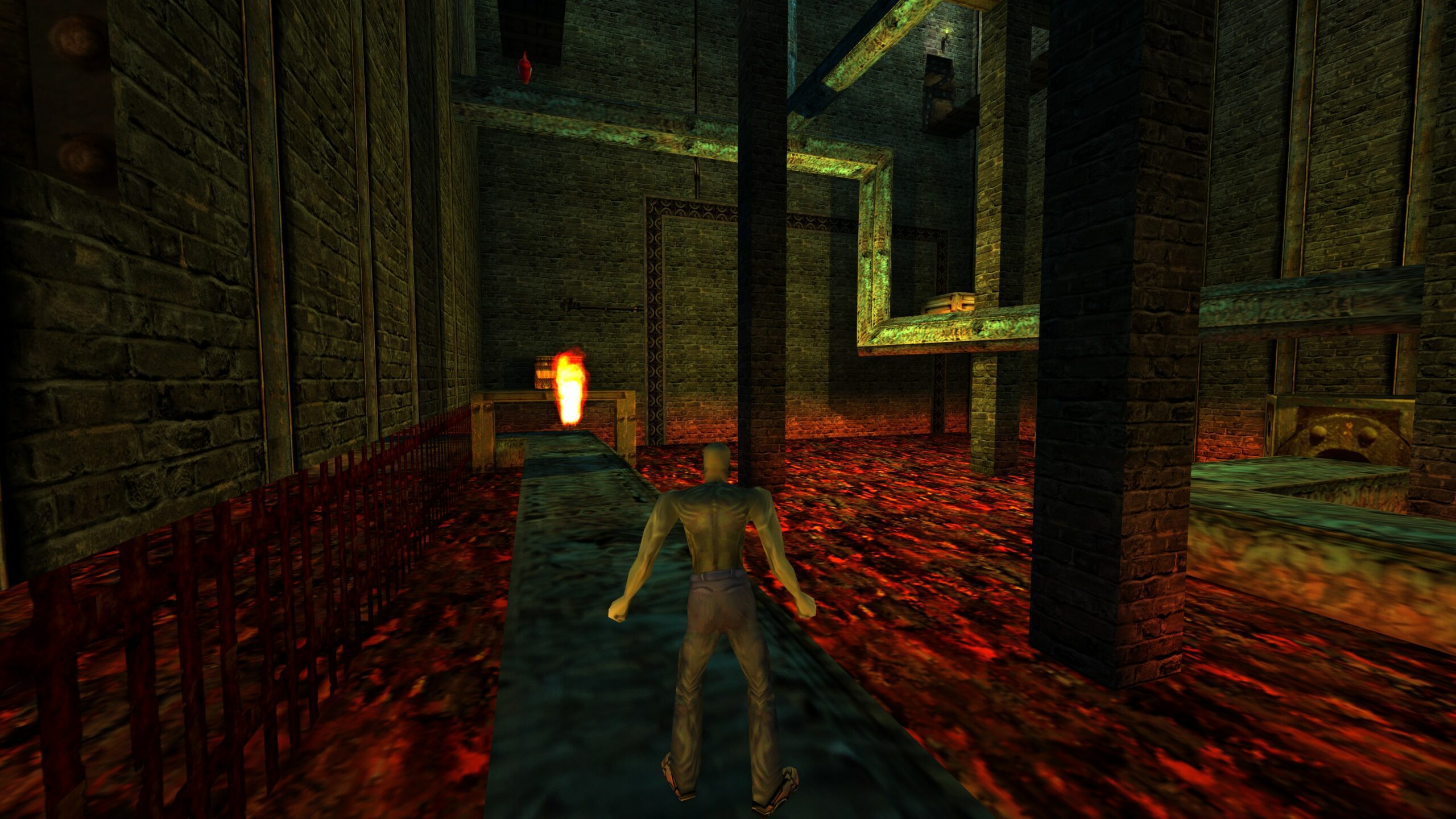 While the combat may suck out loud, the rest of the gameplay holds up better. The exploration is extremely satisfying. The world may look bleak and boring for the most part, and the level design is often confusing, it maintains a consistent atmosphere that prevents things from getting stale.

The pacing is also excellent. Every time you find yourself asking, “So, is that all there is to this game?” it answers with a solid nope and throws something new at you. Shadow Man Remastered starts out rather slow, but after landing a few solid power-ups, everything steadily gets kicked into gear. It holds up throughout its runtime, which is commendable.

The platforming takes some getting used to. This was 1999, and figuring out how to leap off a ledge and how to time your jumps requires a bit of practice. Of the improvements made to the game, improved controls is one of them, it just doesn’t deviate far from the original. I feel like messing with the actual gameplay too much would have been sacrilege. Just be aware, it’s a game that’s in its twenties, and it certainly plays like one. 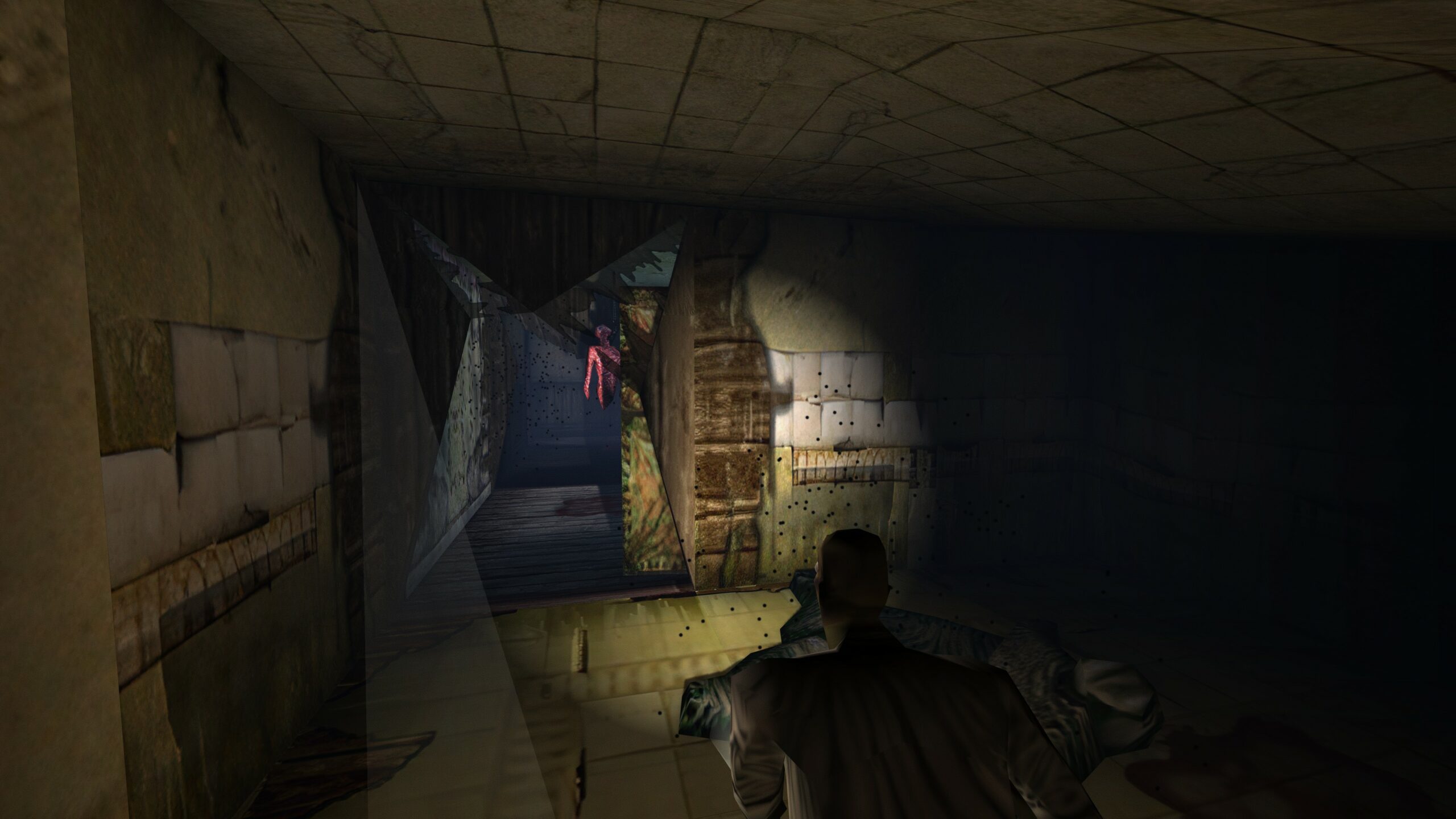 Speaking of playing like a ‘90s game, it can be absolutely brutal at times. Your biggest obstacle throughout the game is different flavors of lava, and it will kill you instantly. There’s no monetary punishment for dying, but you’re sent back to the level’s checkpoint, which is usually near the beginning. At times, the levels are knotted up enough that you can find your way back without difficulty, other times you’ll be repeating huge swaths of annoying platforms just to die in the same spot again.

The soundtrack deserves special mention, since it’s, well, unusual to say the least. Some of the time it sounds very industrial, but other times it incorporates instruments such as children screaming, children laughing, a dentist’s drill, women screaming, and an off-key music box. I’m not sure that really can be considered music, it sounds more like someone recorded the inside of my head after I’ve taken a dose of NyQuil. 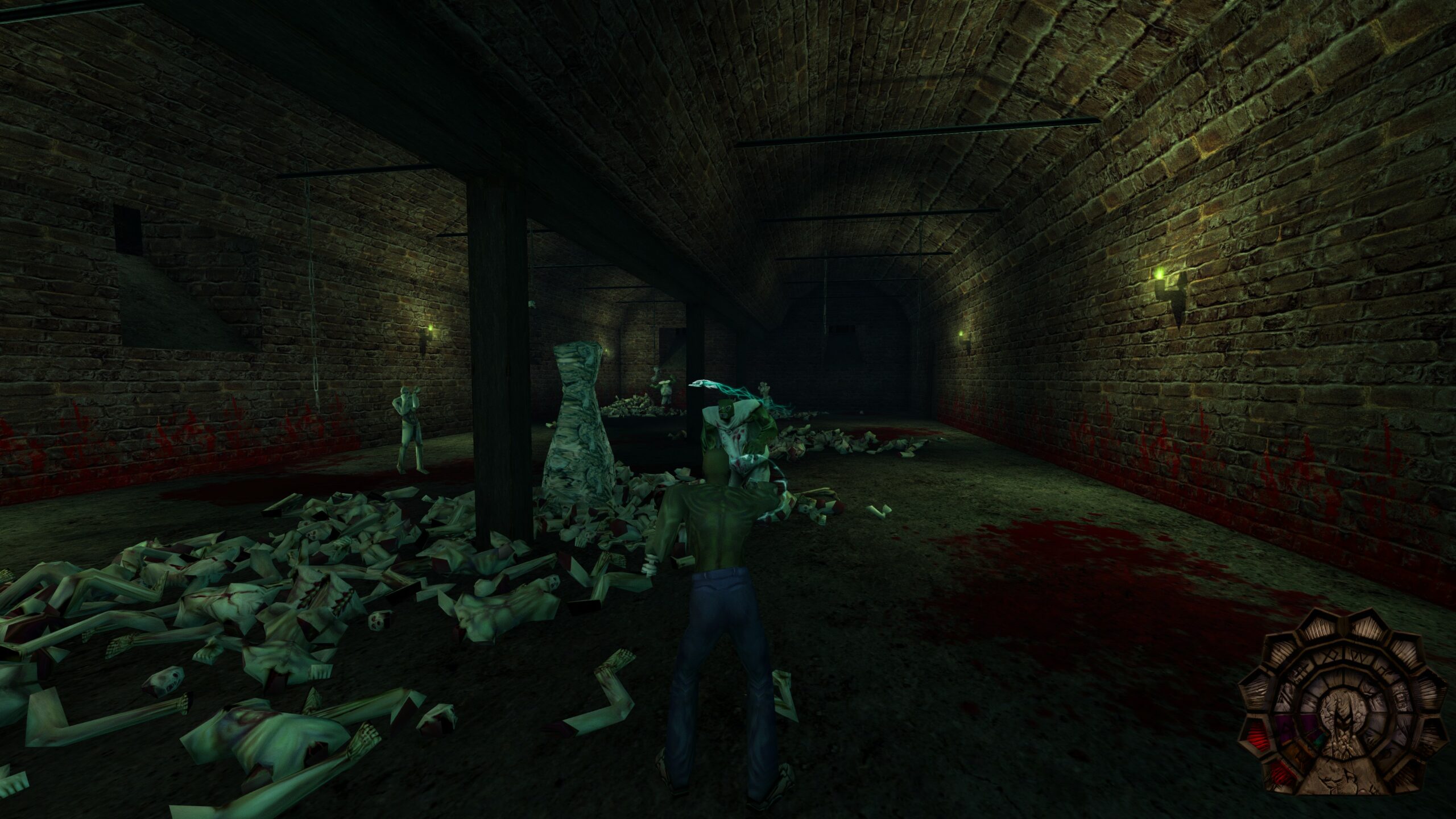 As for what the remaster brings to the table; the main goal is mostly about getting the game running on modern hardware with modern considerations. It can be run in widescreen and 4K, and there are some new post-processing effects. It still looks old, but it’s been glossed up. More substantially, censored and cut content has been restored, including three levels and a number of enemies. It’s more than just simply upscaling the game, it’s legitimately the definitive version of the title.

I’m impressed to say that Shadow Man Remastered legitimately hooked me for most of its playtime. I ran into some frustrations with crashing, but this is the PC version, and I’m insecure enough to blame this on my hardware rather than the game itself. As I mentioned, I didn’t experience Shadow Man during its initial run in 1999, so I’m not speaking from a position of nostalgia. However, I am someone who never really stopped playing early 3D games, so I’m practically inoculated against the jank of that era.

What it comes down to is that Shadow Man Remastered is an excellent title that I enjoyed thoroughly. However, it is an excellent twenty-something-year-old title, and some people just can’t go back to that era. I get it. But for the rest of us, this is definitely a title worth pulling back from Deadside.