Pokémon Rumble was launched on WiiWare in 2009 and apparently did well enough to justify a retail appearance. Pokémon Rumble Blast is the mildly anticipated sequel and first official Pokémon game to come to the Nintendo 3DS — not counting the Pokédex that was offered as a free download earlier this year.

One would assume that the legendary franchise’s first appearance on a Nintendo system would be a red carpet affair. It is not. 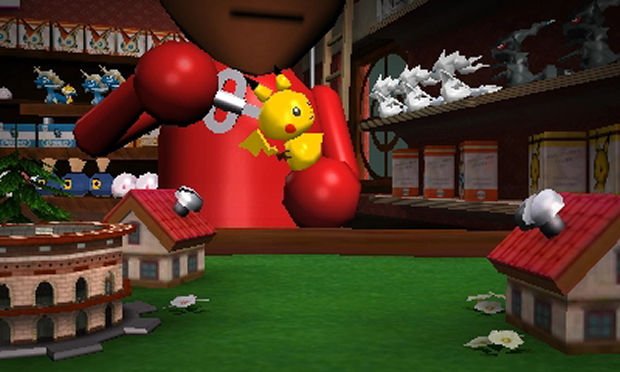 Pokémon Rumble Blast changes little from its WiiWare predecessor. Taking place in a world where Pokémon toys are living creatures in their own right (because of reasons), it’s a top-down dungeon crawling affair that shares quite a few things in common with mindless arcade titles like Smash TV and hack n’ slash RPGs such as Diablo, only simplified to a rudimentary degree.

Simple perhaps doesn’t begin to explain exactly how bereft of complication Rumble Blast is, because it’s as basic as basic gets. The thrust of the game is in mashing one or two buttons to perform singular attacks against marauding Pokémon who are ostensibly doing the game thing. Each Pokémon has a power level to determine its general combat strength, as well as its own set of moves — and by “set” I mean up to two because no monster can have more. When defeated, there’s a chance that enemies will remain on the field as collectible toys which can be collected to grant the player control of that particular monster. This achieves the “gotta catch ’em all” philosophy of the Pokémon games, albeit in an incredibly shallow way. More than usual, at any rate.

Once collected, a Pokémon cannot be leveled up at all, so the only way to improve one’s chances of beating tougher opponents is to collect new Pokémon. While this ensures that players are constantly switching their characters, it also means that there’s no point getting attached to a single creature. One can use in-game coins to buy new moves for their Pokémon, there’s no point because you’ll rarely be keeping a roster of characters for more than one dungeon. 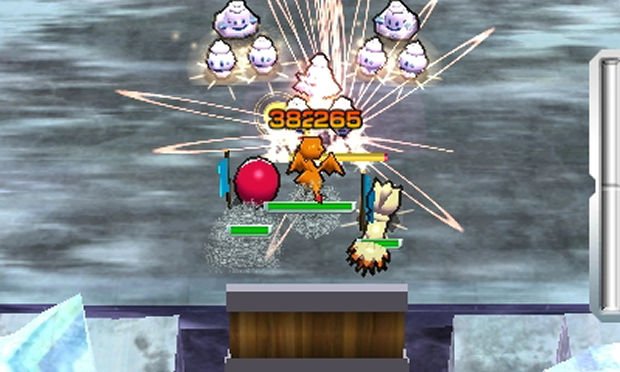 Speaking of moves, some Pokémon will remain worthless regardless of power level thanks to whatever attacks they randomly possess. A staggering amount of attacks are horrible, forcing Pokémon into lengthy animations that often send them directly into the path of enemy assaults. It soon becomes apparent that projectile-based attacks are the most useful since they don’t place player characters in danger, which ultimately turns Rumble Blast into one of the slowest shooters on the planet. It doesn’t help that the vague auto-targeting is slightly off, so attacks miss as often as they hit.

The brainless button mashing is certainly not the most unpleasant of experiences, but it’s thoroughly pointless. This is hammered home by the fact that there is almost zero variety to be had, with a dreary formula that plays out repeatedly during the course of the game. You visit a dungeon, hit the same button over and over again across several floors, then fight a large boss. This happens over and over again until you fulfill some arbitrary requirement to take on a Battle Royale. In a Battle Royale, you fight against yet another swarm of Pokémon with a time limit in place. Once you win a Battle Royale, the game acts like a broken record and skips back to the beginning, expecting players to do it all over again on a slightly different map. 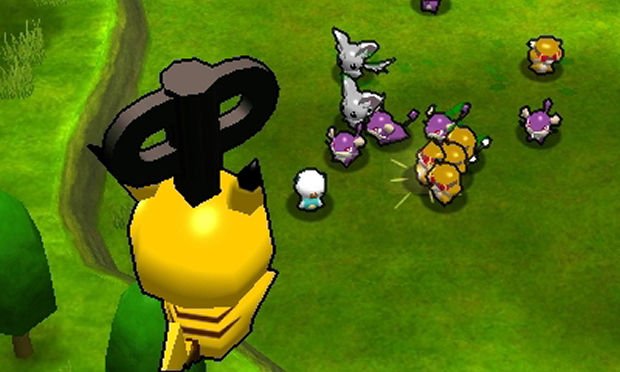 The only thing driving the player forward is some inane story about healing “Glowdrops” being stolen from fountains. I’ll be honest, I did not will myself to draw this story out to its conclusion, but I will bet real money that the story ends by having our randomly collected heroes traipse their way through a dungeon that looks fairly similar to the dozens of other dungeons before fighting a boss and recovering the Glowdrops. For bonus points I’ll bet the bad guy was good at heart.

Every now and then, the bitter cycle of vapid combat is broken up by some random inanity, such as “Charge” sequences. In a charge, you gather your whole collection of Pokémon and use them to bust through enemy defenses by hammering a single button and watching the canned animation repeat itself several times. There’s also a Street Pass feature in which other 3DS owners can visit your game and give money, or provide new Pokémon to battle. It’s a neat little extra, but nothing astounding. Later in the game, you can also fill a meter that temporarily allows you to mash three Pokémon together. In this state, they’ll recharge health and do more damage, though the boost isn’t significant enough to be anything special.

That’s pretty much what Pokémon Rumble Blast is from beginning to end — nothing special. It looks fairly pretty and the game is decently put together, but it’s barely even a videogame when you truly consider what it offers. With a combat system that’s hollow even by brawler standards and a structure so blatantly circular that even gullible children would soon detect the pattern, Rumble Blast is a game that not even ardent fans should bother with. In a world crammed full of lackadaisical Pokémon cash-in products, this is up there with the laziest and I struggle to summon up any feelings for the experience outside of cold indifference.

Going to sleep is a more interesting prospect than playing this exercise in insignificance.