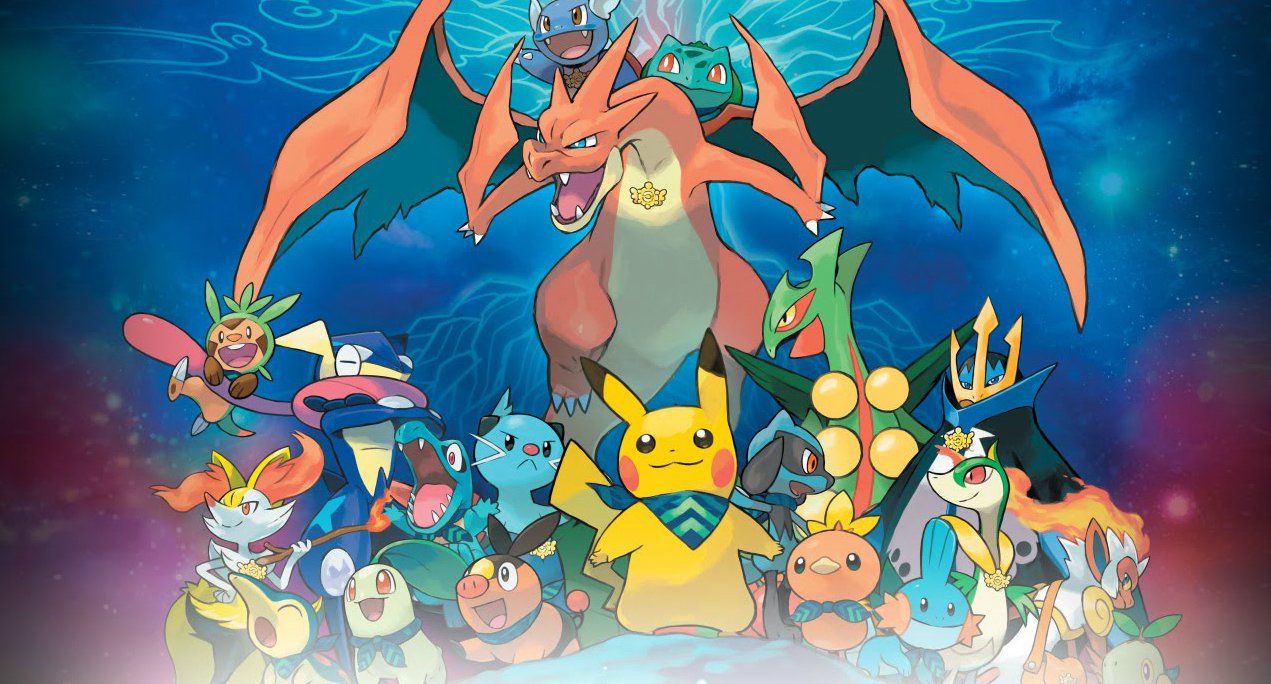 The Pokémon Mystery Dungeon spin-off series transports the colorful cast of pocket monsters from the role-playing games into the challenging world of a roguelike dungeon crawler. Super Mystery Dungeon retains the charming polygonal graphics introduced in Gates to Infinity, but returns to some of the more difficult aspects of the earlier titles.

It also boasts a full roster of all 720 Pokémon. That’s right, every known Pokémon can be recruited and controlled by the player during dungeon exploration. It has that “gotta catch ’em all” mentality of the core Pokémon games mixed with a radically different style of gameplay, and it works like a charm.

To start things off in Pokémon Super Mystery Dungeon, the player will take a short personality test. The test determines which of the 20 starter Pokémon they will become; it also chooses their partner. However, the results can be overruled if the player is unhappy with their chosen ‘mon. The game picked Mudkip for me, with Torchic as my parter, so I just went with it.

The story of Pokémon Super Mystery Dungeon revolves around a human who has been turned into a Pokémon and has lost their memory. The Pokéhuman wakes up in confusion to find that they’re being attacked by a group of Beheeyem, but they’re quickly led to safety by a kind Nuzleaf with a southern accent who shows them the ropes and brings them into town.

Once in town, the player will make some new friends, meet up with their destined partner, and begin going on expeditions into mystery dungeons. From here, the main storyline will begin to reveal itself in bits and pieces. There are whispers of Pokémon around the world mysteriously being turned to stone, the Beheeyem are still following the player, and their memory of being a human refuses to return to them. Eventually, everything will start to fall into place and a grand adventure of world-ending proportions will unfold.

But before all of that happens, there are dungeons to explore. These make up the core gameplay, of course. Mystery dungeons are made up of randomly generated grid-based floors filled with enemy Pokémon, items, and traps. Enemies only move when the player moves, so sometimes it’s best to take things one step at a time so as to avoid suddenly becoming overwhelmed with foes.

To attack, just hold down the left bumper to open up a menu of four possible moves, then select an action. It’s also possible to combo moves with other team members by tapping the right bumper, which activates an “Alliance” to hit an enemy with multiple moves at once. Strategy is key to winning battles. Sometimes the best course of action is to waste a turn so that the enemy might move closer, opening up the possibility to land the first strike. Or, maybe it would be safer to switch positions with another teammate so they can take a blow and allow others to heal. Perhaps a liberal use of items will get the player out of a jam. A lot of planning and foresight is necessary in order to survive most confrontations, so simply spamming attacks is not going to cut it for the most part.

Moving around dungeons will slowly heal injured Pokémon, but it will also decrease a hunger gauge as well, and if hunger reaches zero then the Pokémon’s health will slowly begin to deplete. On top of that, there are status effects to worry about, such as poison or burns, which will stop Pokémon from regenerating health and will hurt them. Other effects, like confusion, can mess with a Pokémon’s movement or ability to act. This can prove to be very annoying and potentially dangerous, so it’s always a good idea to have the proper items available.

Actually, a big part of mystery dungeon navigation involves managing items effectively. Only a certain amount can be held at once, but items will be scattered about all over the place and will quickly fill up the bag. It’s a good idea to figure out which are the most important and plan accordingly. Some of the more important ones are oran berries and reviver seeds which are necessary for healing, elixirs which replenish the PP of moves, apples which stave off hunger, and wands and orbs that keep enemies at bay or help with dungeon navigation.

There are also “Looplets” which act as the sole source of accessory. These can be upgraded with “Emeras” or gems which provide a wide array of different effects to help with combat and navigation (some may even cause a Mega Evolution!), but the Emeras will disappear upon exiting a dungeon.

If the player fails a dungeon, they will lose all the items and money currently being held, unless they opt to wait for a rescue mission. These can be arranged on Pelipper Island, where the player can request help from other players via passwords, QR codes, local wireless, or IR connection. Alternatively, the player can simply return to their old save in order to retain items and money, but of course progress might be lost. Helper Pokémon can also be sent out from Pelipper Island for streetpass purposes, although I haven’t encountered any yet.

While story dungeons will force the player to use specific teams of Pokémon, normal dungeons will allow the player to choose any three Pokémon they wish to use. More Pokémon can be recruited by completing expeditions or simply chatting with folks around town, so the pool of possible allies will continue to grow larger and larger. All 720 Pokémon are available to be recruited, including legendaries, gender variations, all forms of Unown, and more. Using Pokémon in dungeons will allow them to level up and and learn new moves. I don’t believe they can evolve, but since their evolutions can also be recruited, it doesn’t really matter too much.

Normal expeditions are where Pokémon Super Mystery Dungeon really shines, but unfortunately they are few and far between until the main story has been completed. Free play finally opens up in the epilogue, but players are looking at about 20+ hours of gameplay and cutscenes before that happens.

Aside from that, my only real complaints are the lack of skippable cutscenes and the fact that some story missions don’t provide much opportunity for preparation. Even though it often allows the player to choose the items they want to take along and check out the shops beforehand, I still occasionally found myself woefully unprepared for story missions and ended up getting stuck with lousy equipment. The game also tends to save before long cutscenes right before boss fights, so I was forced to rewatch the same scenes over and over again whenever I died. The one before the final boss was particularly frustrating; it was so long!

I’d have to say my favorite part of Super Mystery Dungeon is the way the Pokémon are portrayed. In most games and in the anime, the Pokémon simply say their own names and their personalities, if they have one at all, can only be implied. The main cast of characters in Super Mystery Dungeon consists of a good mix of Pokémon from each generation, and they’re all given their own voice, each with different quirks, opinions, personalities, and sometimes even accents. It’s really fun to learn about these guys in a new light. Some that I liked before I ended up hating this time around (like Pancham and Shelmet, those jerks!), while others that I may have ignored in previous games quickly became some of my favorites (like Espurr!). The cutscenes may have been long and the story may have been a little over-the-top, but I’d say it was worth it in the end just to get to know some of the Pokémon a bit better.

Having never played any of the previous entries in the Pokémon Mystery Dungeon series, I can’t really compare it to the earlier games. However, for my first foray into Pokémon roguelikes, I had a great time! The difficulty seemed to ramp up considerably in some places, but between items, Emeras, and the random elements, I was generally able to figure out a strategy that worked well enough for me to just barely make it through. But if that doesn’t work for some players, there are always the rescue missions to fall back on in case of an emergency.

If you’re like me and you haven’t tried a Mystery Dungeon game yet, this one comes highly recommended. I’m fairly confident fans of the series will not be disappointed either. On its own, Pokémon Super Mystery Dungeon is a quirky, light-hearted spin-off with well-developed dungeon crawling gameplay that provides a satisfying level of difficulty and gives the player plenty of room to develop their own strategies, all the while offering tons of customization options with a huge roster of potential allies and moves. It’s a solid entry in the Pokémon franchise.