Nintendo has been dipping its toes in the water of DLC and free-to-play with mixed results. Although it has done a great job creating worthwhile add-ons that don’t feel like rushed day-one cash grabs, the whole amiibo situation has caused a lot of problems, mostly due to rare figures that sell out in seconds, locking out content behind impossible-to-obtain toys.

Free-to-play worked out great for Nintendo with Rusty’s Real Deal Baseball and Steel Diver: Sub Wars, but Pokémon Shuffle was far too stingy with the ability to let people play the game. While Pokémon Rumble World essentially distills into a mindless hack and slash, it also hosts a fair free-to-play scheme. 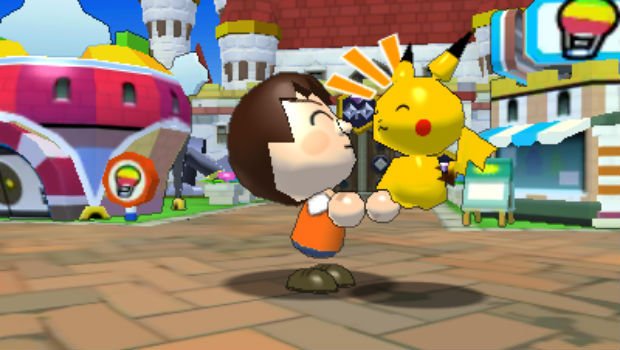 Rumble World has a setup that’s a bit more endearing than past Rumble titles. In a medieval realm of toys you serve the king, seeking to defeat evil wizards and vagabonds, and of course, catch ’em all for his pleasure — and by “all,” I mean all 719. Your Mii is heavily involved in the adventure which is a nice touch, and you can tell a lot of effort was put into it, borrowing from the adventure setup pioneered in Blast.

You’ll start off with one humble creature and progress across small levels comprised of multiple boards, hacking and slashing your way through hordes of Pokémon. On occasion, said Pokémon will drop to the ground instead of exploding into dust, allowing you to capture them and add them to your team. Players start off with just one attack at first, eventually earning two after capturing higher-level creatures. If one so chooses, switching Pokémon is as easy as selecting one from a menu and waiting a few seconds.

Beyond a bit of nuance regarding the weakness chart, that’s pretty much it. It’s mindless, but the dungeon-crawling setup is far more engaging than the arena theme of the first game and Rumble U, especially since there are some side paths to explore and bosses to defeat. Every world is hosted by way of unique balloons (that run on timers; more on that in a second), which are themed after specific elements (fire, water, grass) or subfranchises (Kanto, Johto, all the way up to X & Y), so there’s a lot of variety in store for players who keep forging on.

Capturing more creatures is the main draw of the game, as it will increase your adventurer rank, opening up more shop purchases, quests, and balloon types. There’s also a core storyline by way of daily challenge levels with extra optional objectives. The actual kingdom is very small, mostly consisting of just a balloon launching site and a store, but it will fill up with more Mii characters and Pokémon to spice things up over time. Thankfully, the rate at which capturing occurs feels fair, as you’ll find new party members in nearly every level.

Ok, so how does it work with the free-to-play model? Not bad, actually! The premium currency is Poké Diamonds, which can be used to insta-buy items, new balloons upgrades, continue after death, or inflate balloons early. 50 Diamonds for $1 is the going rate, and balloons sell for 10 to 100 Diamonds each. You can also earn Diamonds through normal gameplay. That’s right, the game has timers, but it’s done in a fair way that allows you to constantly play the game. For starters, those daily story quests are repeatable without having to ride balloons. You can’t capture anything while playing them, but you can earn Diamonds and, of course, simply have fun without having to worry about energy or timers.

On top of that, most of the early balloons inflate at a rate of 30-60 minutes (some are longer), and all of them have individual timers. It’s not as bad as some other energy-based games as rounds tend to last more than 30 seconds (my average dungeon run is two to three minutes), and I had plenty of other activities to do while waiting like exhaust all of my other balloons, master additional challenge difficulties, and manage my party. 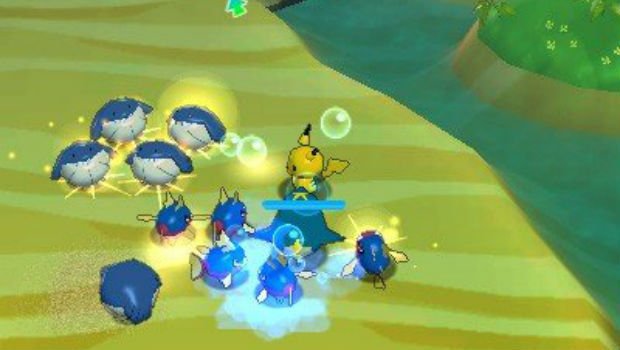 Later in the game by the time you finish all of your timers, you’ll cycle through several of them, allowing immediate repeat adventures. There’s also some online and StreetPass functions, including the ability to invite other players to your kingdom, visit other realms, and earn Diamonds. I can’t stress enough how mindless everything is, but I had a decent enough time jumping into each dungeon on a repeat basis, staring at the party screen as more and more creatures populated it.

Pokémon Rumble World probably won’t make as much money as Shuffle, but it feels a whole lot less scummy. It’s fairly shallow but very fun in spurts, and the best part is that players can truly enjoy the game for more than a few minutes at a time without feeling like they aren’t getting anywhere. I may have burnt out on the simplistic formula after roughly a week of play, but I still have a desire to return to the game on a casual basis.