Pocket Rumble’s arrival on Switch comes at an awkward time. We initially found out about the port last year and it was expected to launch in the first few months of the system. That didn’t happen, obviously, and in its absence, other developers and publishers stepped in to fill the fighting game void. We got ARMS from Nintendo, a slew of old SNK titles, that BlazBlue season pass disguised as a retail game, and two pretty damn good Street Fighter ports.

This game aims to set itself apart from those other fighters by simplifying the genre. Doing away with complex combos, Pocket Rumble thrives on simple-to-learn mechanics and an art style that channels the whisper of an era where Neo Geo thought its Neo Geo Pocket Color could compete with the Game Boy Color. And while it absolutely nails the aesthetic of the celebrated fighting games that landed on that forgotten platform, a lot of work is needed if it wants to keep pace with its fellow Switch fighters. 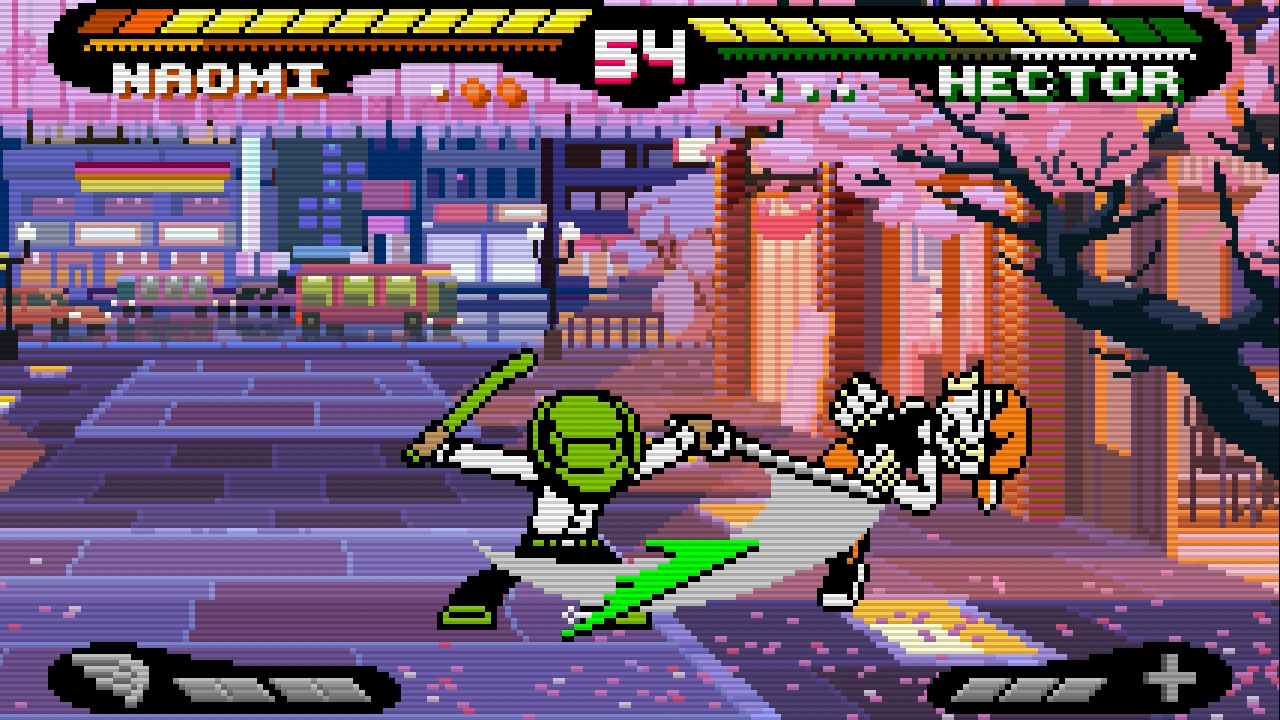 Pocket Rumble hands me my ass on a silver platter just minutes into my first match. After learning the ins and outs of combat through the tutorial and familiarizing myself with the various hitboxes in training mode, I step into the arcade mode thinking it will be like other fighting games. The first match will be easy with each subsequent bout amping up the difficulty until I reach the final, brutal, almost unfair boss fight.

That’s not how this goes. Pocket Rumble doesn’t start easy. It doesn’t have an easy mode or even a normal mode. Its only mode is an AI high on speedballs laced with meth that tests my patience as it takes everything I know about how the game works, and simply does it faster than me. It attacks faster, it blocks faster, it grabs faster. This isn’t a game that wants to ease me into its system as it would rather feed me to the wolves — or in the case of one character, werewolves.

The spiked difficulty of Pocket Rumble’s AI runs counter to the sermon developer Cardboard Robot Games has been preaching about its long-in-development port. Upon launch, publisher Chucklefish proclaimed the game to be beginner-friendly, a laughable assertion when facing computer-controlled opponents with blindingly quick reaction times.

Of course, the claim of this being a fighting game for fans of all abilities has to exist with its control scheme. Pocket Rumble has just two attack buttons players can use to chain together short combos in best-of-five matches. Special attacks are activated the same across the board. Pressing diagonally down and forward or down and backward while pressing either of the attack buttons will set off a special. There are no quarter circles or back-back-forwards to remember here. If you learn one character you have the gist of how they all play. Mastery of said characters is a different story.

Eight fighters are available at the moment and each of them is incredibly well-rounded and distinct from the next. The Wendigo-powered Tenchi is the most conventional of the cast acting as this game’s Ryu or Ken. Keiko is a trap-laying queen who harnesses a demonic cat in all of her special attacks. Quinn reminds me of Vega with his wall-jumping abilities, but can also turn into a werewolf to tear shit up. June is able to overload opponents with special attacks and Parker has the ability to drop orbs on the stage that can shock opponents and is the only character who can parry.

Parker’s parry is what’s considered his metered move, and every character’s metered move is unique to them. These maneuvers are activated by pressing both of the attack buttons at the same time, or I can set it to one of the other buttons on my Switch not in use. Parker has three parries available at the start of each round. Land a parry successfully, and I can still use three. Miss, which can be incredibly easy to do, and I lose one. Miss three times and that’s it until the next round. Quinn’s metered move has him transforming into the aforementioned werewolf, Tenchi needs to power his up by simply using, not even landing, his special moves while brawler Naomi has to amp herself up to use her powerful attacks.

There is such diversity among the cast and their special and metered move sets that I expected most of my time would be spent learning how to apply these tools to combat. But with the amplified difficulty of the single-player, my treks through the game’s various modes are more about spamming and survival than anything remotely resembling strategy building. In addition to online ranked and unranked multiplayer, Pocket Rumble has a small suite of offline options, including two-player versus where each player can use a single Joy-Con, arcade mode, career mode, training, lessons, and a versus CPU mode. The latter is the only one with selectable difficulty.

Initially, the AI for the arcade and career modes comes across as wildly unfair, like it’s been turned up to 11 and the nob has been broken off. The speed at which an opponent can go from attacking me to grabbing me out of my blocking stance is, at times, impossible to counter. But as I play I find it’s not incredibly difficult as much as it’s inconsistent. In one match Naomi will unleash a barrage of attacks I have no chance of avoiding, the next she won’t even attempt a punch. Not once, in all of my trips through the arcade mode, did the AI-controlled Quinn activate his werewolf abilities. Keiko just jumps in the corner of the stage like she has a Kris Kross song playing in her head. Subject 11, who acts as the final boss for the arcade mode, is quite difficult to face one-on-one given his repertoire of attacks but is comically simple with a few of the characters who can absolutely game his programming. Pocket Rumble makes me want to break my Switch in half one second, and the next I’m moonwalking my way to victory.

Online multiplayer is where it has a chance to shine. Pocket Rumble uses Good Game Peace Out, or GGPO, to manage online play and for the most part it works well. Before a match, the game tells me the ping rate of my opponent, giving me the option to turn down a fight. In the several dozen online matches I play only a few have lagging issues. The rest run far more smoothly than I expect from an indie fighting game. 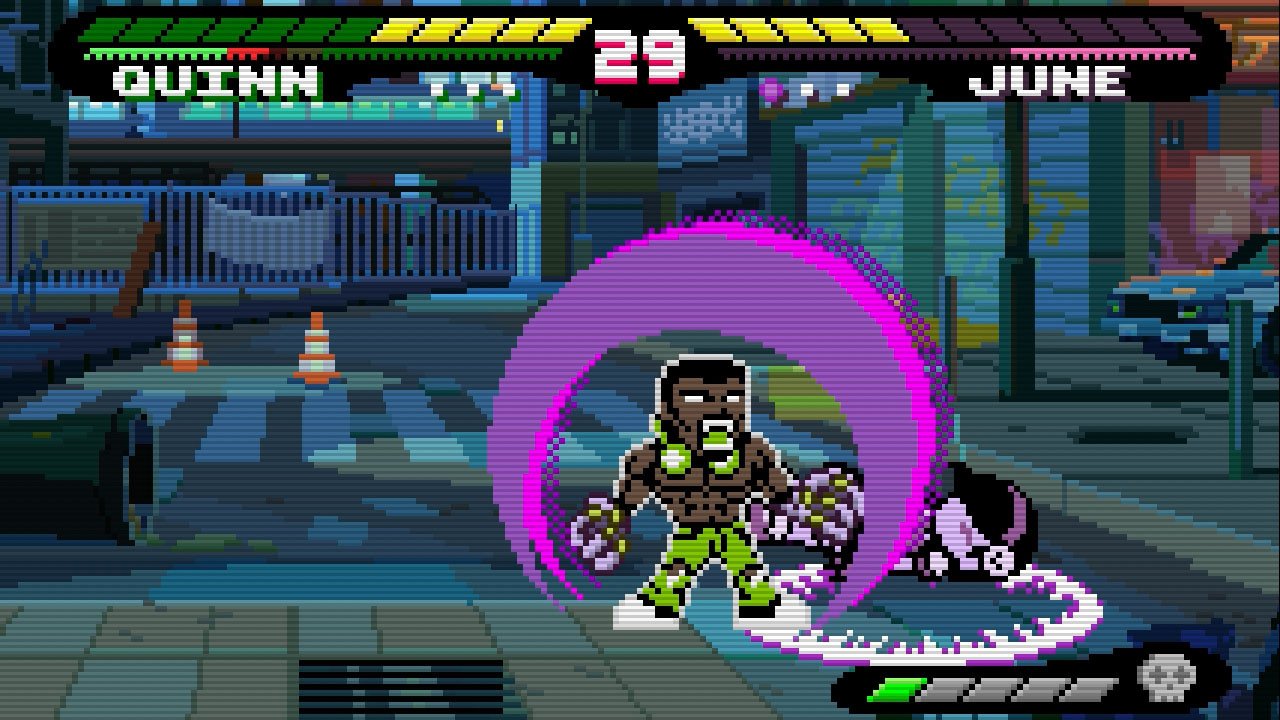 My only issue with online fights is it really illustrates how unbalanced the characters seem to be right now. Hector will lose health whenever he uses a special attack but his metered move allows him to gain some of that back. Because this game is special attack heavy, I never come across him online. Not once. Nor do I encounter Keiko or Parker as Keiko’s special moves are highly technical and the payoff of Parker’s lightning orb attack doesn’t equal the effort it takes to pull one off. Mostly, online has been a sea of Junes, Tenchis, and Quinns as they’re the characters with the most exploitable move sets. Tenchi can spam projectiles, June can overwhelm opponents with unblockable low, mid, and high attacks all at once, and Quinn’s werewolf form has a heavy attack that can devastate the other player without giving them a chance to retaliate.

I’m guilty of it myself. After attempting to play as Parker in my early rounds, I find the most success with June and the various cans of gothic whoop-ass she can open on her opponents. Really, the only thing holding me back from greater superiority online is the Joy-Con is not really suited for this fighting game, even with the simplified mechanics.

I would be remiss if I didn’t at least mention the visuals because if there is one aspect of Pocket Rumble the developers nailed, it’s this. Fighting games on the Neo Geo Pocket Color got their look due to hardware constraints and Cardboard Robot Games has aped that style with gusto. The characters are distinct and recognizable, the backgrounds lively and well-detailed. I can even adjust the scanline opacity for maximum throwback. 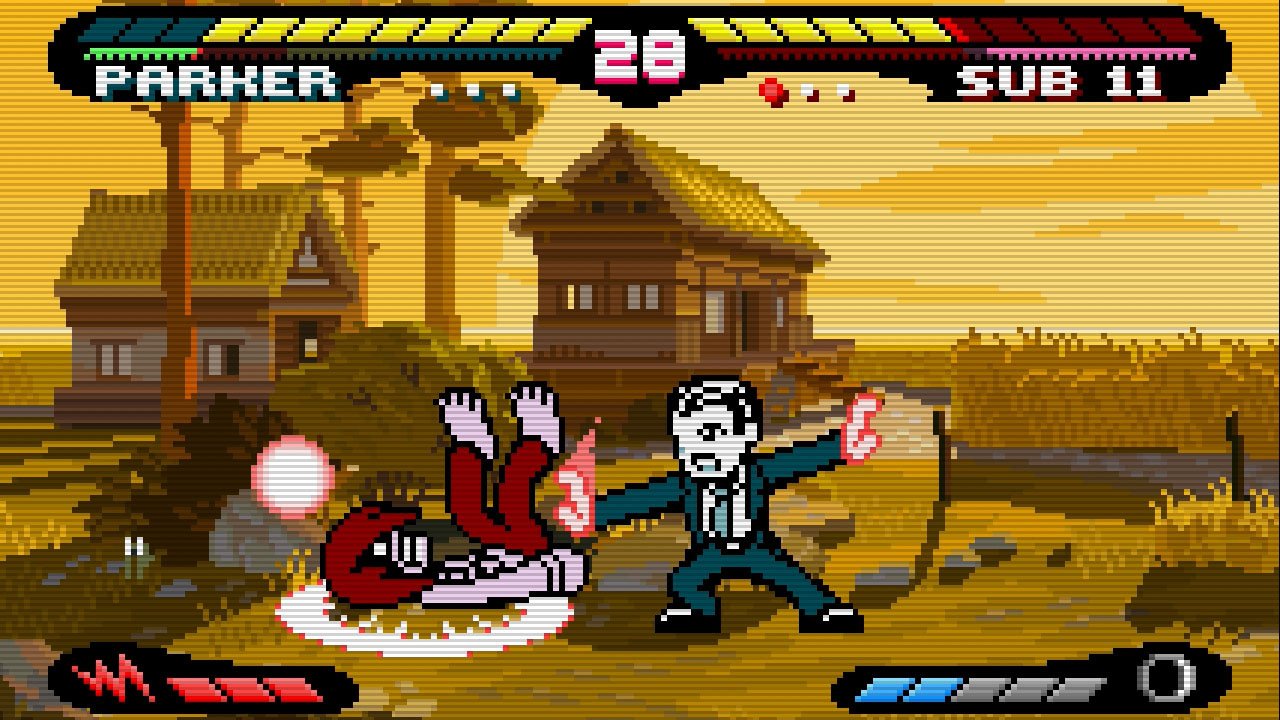 What most impresses me are the little touches throughout. If I ever reach the fifth round in a match, the background will change to elevate the seriousness of what I’m about to encounter. Upon victory, each character has their own little celebration, some of which interact with the downed opponents depending on where on the stage they’re located. My favorite little bit of extra effort is with June and her victory celebration. In it, she possesses the body of her defeated foe, erecting them zombie style. However, if I beat another June, the possession will be incompatible and error out. It’s a small detail I didn’t expect and I love it every time I see it.

It’s a beautiful game, but that beauty can’t hide the fact Pocket Rumble still needs a bit of work. When playing with friends locally the game is an absolute blast. That’s when it’s at its best. It’s all the other modes that weigh the package down. I’m not too keen to return to any of the single-player options until the AI is fixed nor do I wish to endure the spammy assaults of the same three or four characters I face online. With some fine-tuning, Pocket Rumble can get to where it needs to be, but Cardboard Robot Games should probably hurry because the Switch isn’t short on quality fighters and the field will only grow more crowded as we continue the march towards the end of the year.