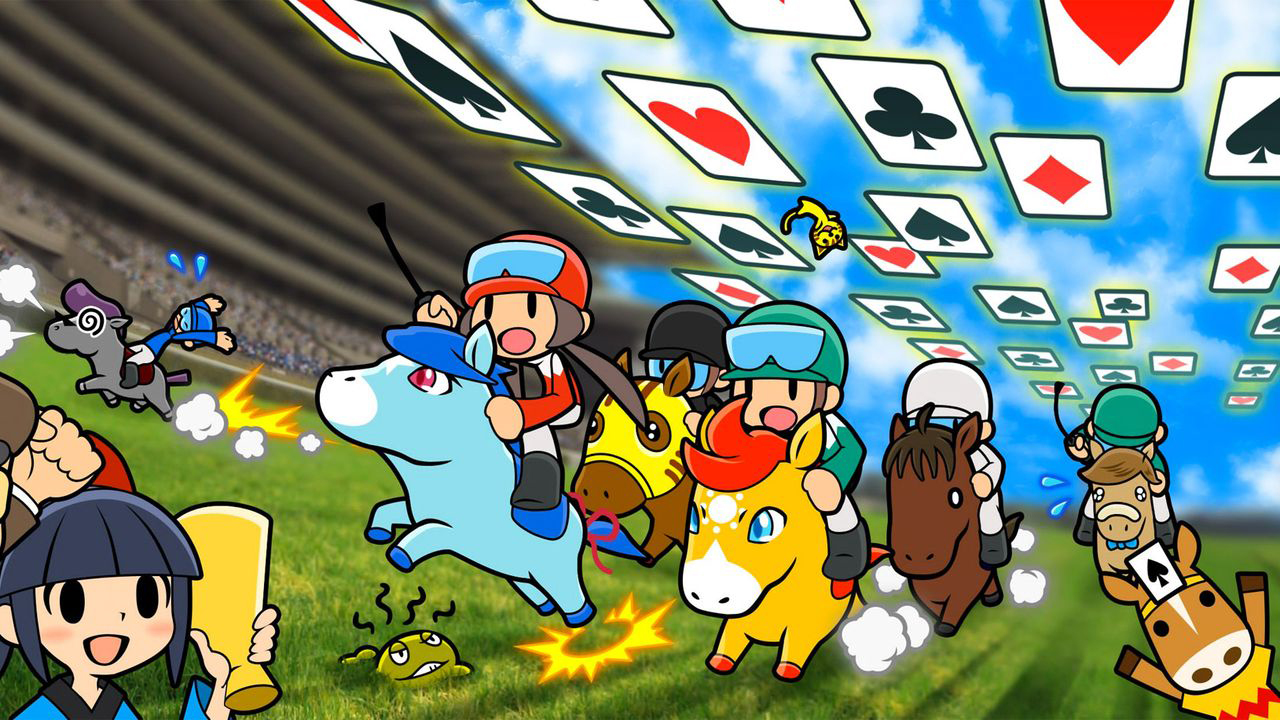 Think of them as big greyhounds

Counselor: Hello everyone and welcome to this addiction support group. I see we have a new face here tonight so, sir, if you’d like to stand up and tell us all why you’re here?

Me: Very recently I downloaded a new video game that has completely consumed all of my free time. I’m missing sleep, I’m falling behind at work, and I’m fighting with my wife all because I can’t stop playing this game. My name is CJ Andriessen and I’m a Pocket Card Jockey-aholic.

(They applaud me for my bravery) 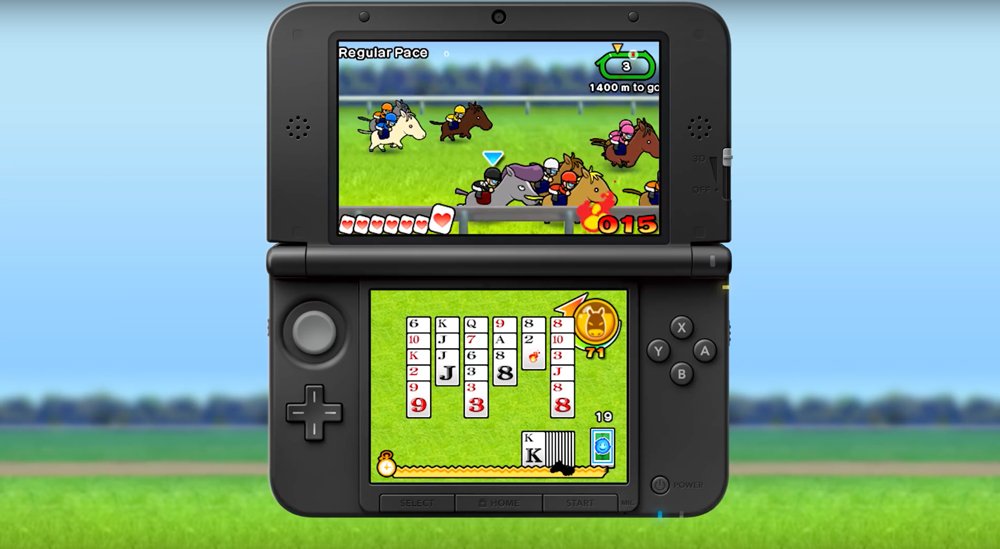 Pocket Card Jockey puts you in the shoes of a terrible, terrible jockey. So terrible, the first two minutes of the game consist of him or her losing a race and being trampled to death by a stampede of horses. Your character is bummed they’re dead, but an angel tells them to quit their equine-ing and get back on the saddle. They’re given a second chance and, through the magic of solitaire, a real shot at actually winning a race and eventually the derby.

Each race is divided up into three portions: solitaire, positioning, and the homestretch. In solitaire, the objective is to clear all of the cards out of the tableau pile before time expires. During the positioning phases, you’ll use the stylus to guide your horse to the portion of the track where it will perform its best. Both the solitaire and positioning sections of the race build energy, which your horse will burn in the homestretch.

Solitaire here is an extremely simplified version of the game. You need clear all the cards from the screen by selecting a card with either a higher or lower value of the last card played. If you get stuck there is a stockpile to help you out. Succeed and you’ll build unity power that you’ll use in the positioning portions to move your horse around. Fail and any cards left on the screen will put your horse in a bad mode. Fail too many times or leave a high number of cards on the screen and you’ll end up with a runaway horse you have no control over.

Using the unity power you built up during solitaire, you’ll attempt to place your horse in the ideal spot on the racetrack during the positioning phase. After you move your horse, any remaining unity power can be converted into energy. Comfort zones help you determine where your horse should be for maximum energy production.

While moving your horse is as simple as drawing a line on the touch screen, actually hitting the desired spot is often difficult to do because of the unpredictable nature of the other horses. Many times in many different races I found myself way behind or too far in front of where I wanted to be because some other horse decided to knock me out of its way.

Races alternate between solitaire and positioning stages a few times before you reach the final turn and the homestretch. In the homestretch, all of the energy you’ve built up is turned into enthusiasm. The higher the enthusiasm, the faster your horse will run. If you don’t build up enough energy, you might find other horses passing you by on their way to the winners circle.

That’s honestly just the basics of the game, but there is a lot more to it. With special cards, comfort zone forecasts, stamina, mood, turn radius, running styles, skills, and characteristics; the game can appear inscrutable. For the most part, Pocket Card Jockey does a thorough job of explaining all of these aspects, giving me the tools I needed to win. Once I got the hang of it, once everything jelled, I couldn’t put it down.

Of course, you can be an expert at every bit of this game and still come up short due to bad luck. A poor draw of the cards, horses block your way — a lot in this game is out of your direct control. For me, that just added to the excitement of the races. So many times my plan for success had a wrench thrown in it and I had to do everything I could to overcome it. That’s when I was having the most fun with this game. 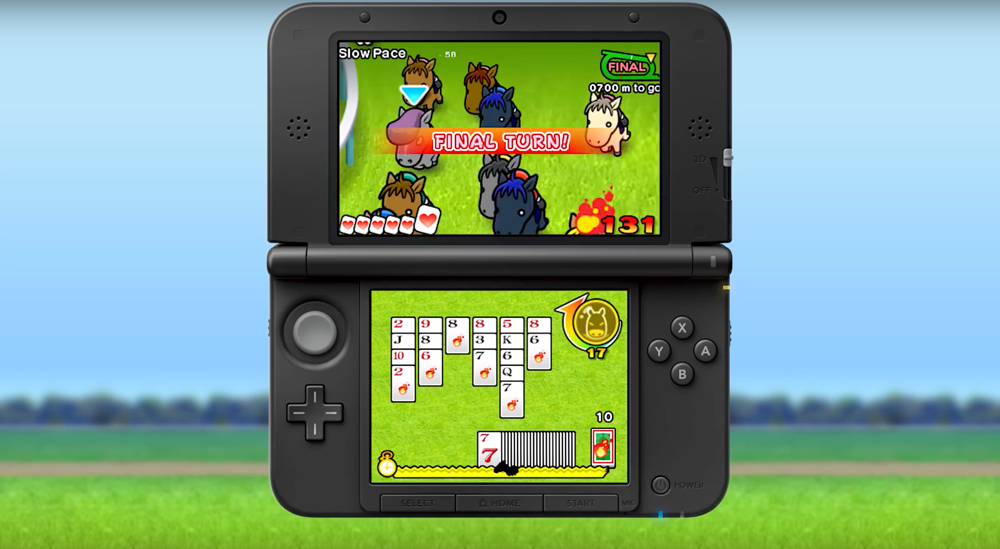 Don’t go into this game thinking you’re going to win every time. Like Ted Cruz, you’re destined to suffer a good number of losses. If you want to win every cup and collect every trophy, you need to be in this for the long haul. I’m pushing 20 hours and still haven’t captured every cup. There is a shop where you can buy power-ups for a single race, but it’s best not to depend on it as the prices tend to fluctuate more than an Uber driver picking up a fare on the wrong side of town. As it is in real life, the only way to guarantee success is to be born into the right family.

Every horse you start with will begin in Growth Mode. This is a two-year span of several races where your main objective is to level up your horse’s speed and stamina as much as you can. After that period is up, your horse will enter Mature Mode where it’ll no longer level up and you’ll have to use whatever you have going for you to win as many races as you can. If you lose three races, you have to retire your horse. Because everyone in this game attended the Ricky Bobby school of thought, second place is considered a loss.

Once your horse is retired, you can send it to the farm to breed. Horses with the most wins under their saddle will produce better offspring in a mating scene that is way less graphic than what we saw on this season’s Silicon Valley. Once you have a new horse, either through breeding or selecting one from the various owners you’ll meet, you start the process over again in Growth Mode.

Helping keep the game from feeling too repetitive is the wonderfully funny script that pairs well with the delightfully simplistic art direction and animation. The writing here is genuinely hilarious with jokes that most kids will get and a few that are for the grown-ups in the room. It’s clear whoever was translating this enjoyed it and that enjoyment rubbed off on me because I couldn’t stop giggling whenever the game poked fun at the new, obscenely rich horse owner who wanted me to jockey for them. 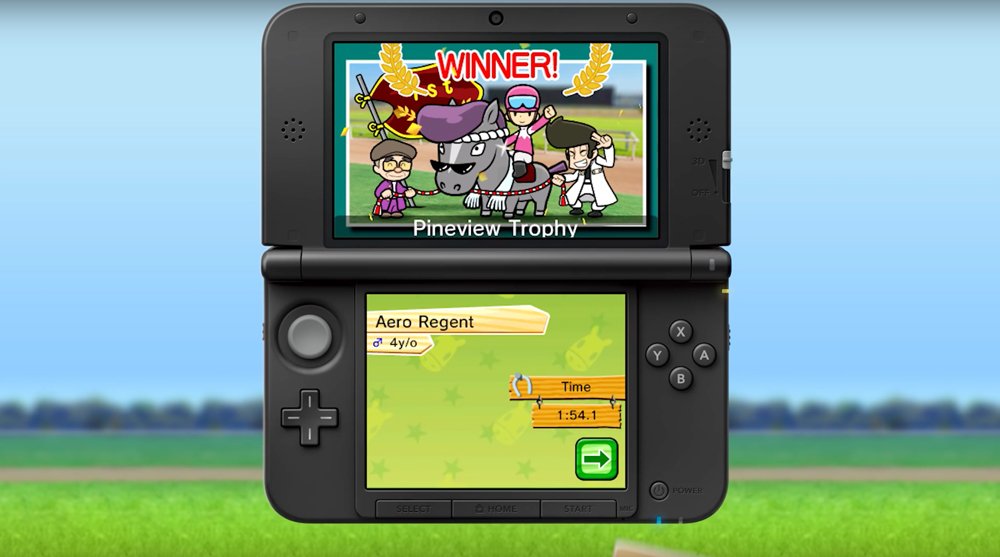 Sure, there is a severe lack of women wearing flamboyant derby hats in the game and the differences in dialog between playing as a boy or a girl might be puzzling (his dream is to inherit his father’s orange farm, her dream is to get married and have kids), but all of that is easy to look past with a game that beckoned me to play it until the battery on my 3DS died.