Playing god isn’t all it’s cracked up to be

Pneuma: Breath of Life is, through and through, a creationist tale. There’s no theory of evolution, carbon dating, or Darwinism to cause debate. It’s one god and the world that he brought into existence mere seconds earlier.

As it turns out, being the only inhabitant of a world is a dull affair. 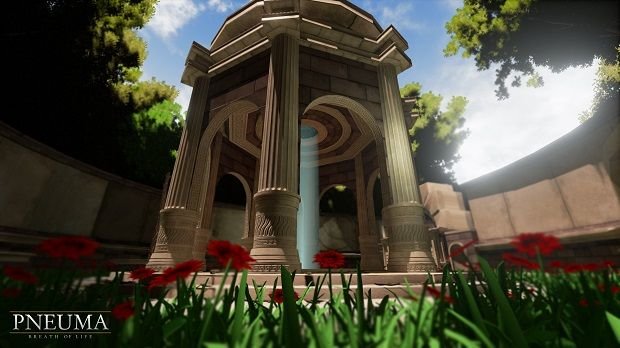 Pneuma: Breath of Life begins aflutter with promise and hope — not only from the possibilities of a game tackling this subject matter, but also from the point-of-view of the confused yet eager deity that’s being guided. Surprisingly, he’s not omniscient, an earmark of gods. He’s on a path of discovery right alongside the player.

That introspection is much more thrilling in theory than in practice. Pneuma is a puzzle game that relies almost exclusively on looking at things. Look at a symbol to open a door. Look at an orb to transport it from one spot to another. Don’t look at a symbol to open a different door. Occasional interaction will be required, but the bulk of mind teasers are centered around the concept of proper camera orientation.

It’s a temporarily interesting way to introduce rudimentary problems, but Pneuma never evolves beyond that concept. Once complicated puzzles are added into the fold, the sheen wears off and it’s mixed as to how well they work. The worst offender was a room whose constraints required that all floor tiles match, and they individually flipped either black or white when out of view of the camera. In essence, it required selectively isolating certain tiles outside the field-of-view so as to change only them. The solution to the puzzle was immediately apparent, but the execution was needlessly frustrating, feeling like an exercise in futility at points.

The payoff for solving these puzzles (apart from more puzzles) is another short glimpse into the mindset of the god that’s being controlled. For an infallible power, he’s delightfully uncertain of absolutely everything, all the while trying to grasp the gravitas of the situation. Before long, the player will fall right in line and wonder too what this deity is truly capable of.

The cadence to these sections makes Pneuma feel as if it’s made up of two distinct (and maybe disjointed) halves: the puzzle parts and the parts where you listen to the god. The latter is undeniably the best the game has to offer. Even though Pneuma routinely tasks the player with logical thinking, it’s the philosophical that’s far more interesting.

All of this is wrapped in a world that looks absolutely stunning. When this god created everything, he added a palatial touch — one fit for a supreme being. The light reflects off the gold and marbled interiors in a way that somehow contributes to the overall regal sense of everything. The settings are relatively static, but Deco Digital did a fantastic job with what it made.

However, impressive aesthetics and weighty mental gymnastics aren’t enough to compensate for puzzle design that becomes a slog before long. It’s a shame because Pneuma boldly asks questions about player agency, but in ways that are bogged down in tedium.