PlayStation All-Stars Battle Royale has some big shoes to fill. While the arena battle genre isn’t exactly bursting at the seams these days, the inevitable cloud of Super Smash Bros. looms over Sony in more ways than they care to admit.

Most of you probably just want me to outright tell you whether or not All-Stars is as good as Smash Bros. and be done with it. Nope, I’m not going to answer that — All-Stars should be judged on its own merits.

And based on those merits, it excels. 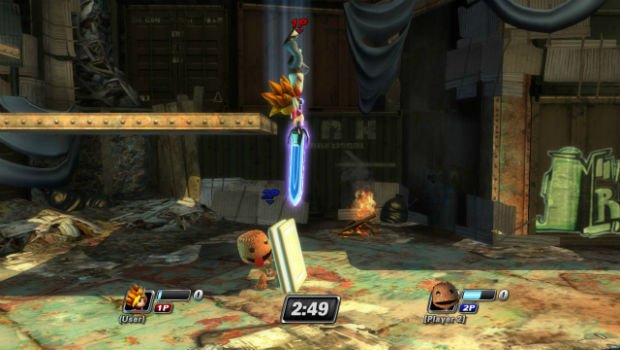 One of the reasons Sony has an uphill battle with All-Stars is the general lack of enthusiasm for Sony characters, say, against the franchises of a company like Nintendo. A lot of people out there may not feel a connection to around half of these characters. Hell, a lot of you probably don’t even know who the hell Sir Daniel Fortesque even is. I get that.

But as for myself, I grew up with MediEvil, Ape Escape, Sly Cooper, Jak and Daxter, and a ton of other Sony properties right alongside my favorite Nintendo mascots.

Outside of the lame addition of “Evil Cole” to accompany Cole MacGrath, every character feels unique, and very true to their franchise roots. For instance, Sackboy utilizes his Popit menu to call up various items from the LittleBigPlanet franchise.

Sly Cooper’s signature cell-shaded style is accented on his character model, and his moveset feels like you’re playing a 2D Sly Cooper game. This concept of originality pretty much extends to every character — even to Dante, who doesn’t even have his new game on the market yet.

While a host of battle arena games have a huge cast of characters (compared to the 20 included in All-Stars), a lot of them end up as clones, or don’t show off the character’s franchise roots and are just relegated to a generic “fighter” moveset (see Roy/Marth/Ike in the Smash Bros. series as an example of both of these points). I can happily report that outside of the aforementioned Evil Cole clone, none of this nonsense is present in PS All-Stars. 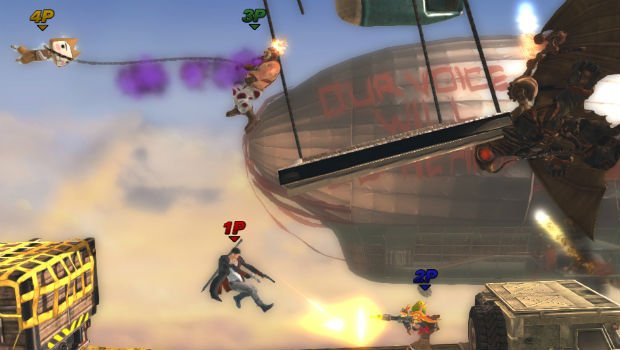 I’m happy to report that every single character’s movement feels unique, and smooth. For instance, when Raiden runs up walls, he does so in a fashion that resembles cutscenes from Metal Gear Solid 4. Hell, some characters can’t even run up walls, and they have unique movements of their own — like Spike’s propeller copter, or Dante’s Trickster Style air-dash.

In one particular battle, an enemy Sackboy nearly avoided my Raiden break-dance kick super simply by being small. It’s little nuances like this that constantly come up in fights, and keep things interesting. I really could go on forever, which speaks volumes to the amount of work that went into the game. A lot of detail is present in Battle Royale, which should be commended; this is not a half-assed “clone.”

Unlike most arena games, All-Stars doesn’t operate on the normal set of guidelines when it comes to actually KO-ing enemies. In order to earn a kill, you have to attack enemies until you gain up to three levels of super power, and launch a level one, two, or three super. Usually, these supers range anywhere from a small forward-facing attack (level one) to a giant screen-covering instant kill (level three).

As you can imagine, this system can go either way, with no room for an in-between result. Overall though, I’d say that it succeeds in forging a more positive experience. It creates a sense of urgency that strictly punishes turtling — only by aggressively attacking your enemy will you actually get kills. The system makes the game more fun and competitive at the same time, and speaking as someone who has literally chased around turtle-heavy players for five minutes at a time in some battle royale games, this is a welcome change. 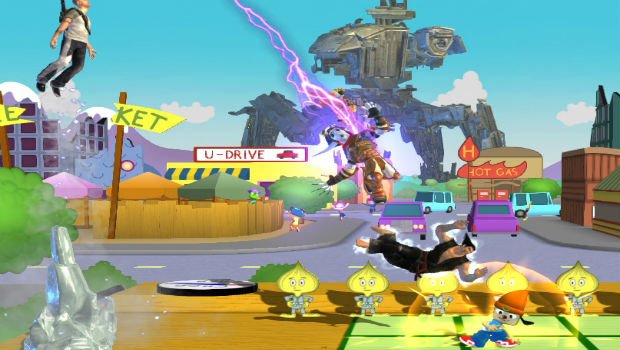 The supers themselves are also really fun, containing the same amount of variety the rest of the movesets feature. Raiden will force everyone into cardboard boxes and have the opportunity to hunt them down; PaRappa will “rap cool” with the same UI as his old franchise to knock everyone out of the park; and so on. A level-three super, while generally powerful, is earned rather than randomly picked up, so you don’t feel cheated out of a kill.

Other than supers, each character has a ton of moves at their disposal. Using a three-button attack system, most characters operate under the methodology of Square for melee attacks, and Triangle/Circle for special abilities.

If you’re familiar with most titles in the genre, the vast majority of them only have two attack buttons — the inclusion of a third in All-Stars adds a ton of depth that doesn’t get too crazy or convoluted (with abilities for neutral, left, right, down, and up directional inputs, essentially giving each character an additional five abilities). Odds are you’ll be experimenting for weeks attempting to find out what abilities work in tandem with each other, again highlighting the depth that All-Stars provides so well.

But none of this would mean anything if the actual arenas weren’t any fun to play, and you’re pretty much taken care of in this regard. The incredibly solid level selection is one of the best in the genre (including Power Stone 2), hosting levels that combine two Sony franchises together amidst a ton of hazards and obstacles (again, think Power Stone 2‘s organic hazards).

In some stroke of luck, there is not one single level where I would groan and say, “Not this level again” when picking a random arena. While not every last one of them is created equal, some of them are surprisingly well done, like the one from the yet-to-be-released Bioshock Infinite, or the vertical inFamous tower stage. 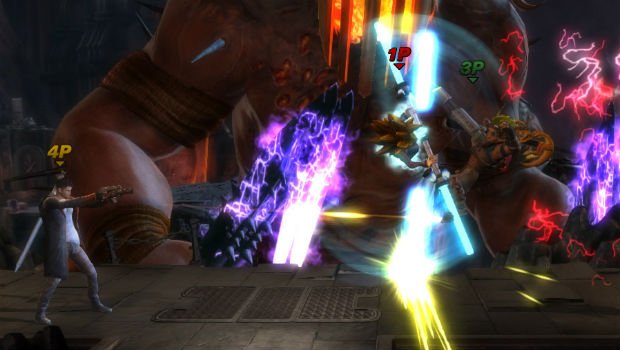 There are only two rulesets (Stock and Time), but you can opt for any combination of teams, any combination of items (either completely off, or piecemeal item inclusions), and you can choose whether or not to earn supers faster or slower than normal.

I heavily prefer the stock ruleset, since it works very well with the concept of killing enemies through supers. You’ll find yourself constantly changing tactics, deciding whether or not to blow a low-level super, or hoard up your power and go for a level three at the perfect time. It adds a new depth to the genre, but isn’t too overbearing for new players; the initial concept of mashing buttons and pressing R2 to use a special attack isn’t hard to grasp.

To augment the fighter’s movesets, characters have three costumes each (in addition to different color schemes), and they’re all fairly unique. Fans will instantly recognize the throwbacks (like Raiden’s Metal Gear Solid 2 costume instead of his default MGS 4 “cyborg” look).

To be clear, the game lacks any sort of epic “Galaxy” story mode, like in Smash Bros. Brawl. All-Stars only features an Arcade mode that hosts a number of random battles before a small cutscene and fight with your “rival,” and a final boss fight. Before and after each character’s story, there are tiny animated intros and endings that last around a minute each.

While the intros provide a fleeting sense of nostalgia (it’s nice to see Spike chasing Specter again), I can’t say that I wholly recommend the single-player campaign. Nearly all of the “stories” feel the same, and if you don’t play on Hard mode, you’ll probably finish each of them in twenty minutes or so. Thankfully, as long as you’re willing to buy into raw combat, outside of the decidedly bare-bones Arcade mode, there are a small number of alternate solo options. 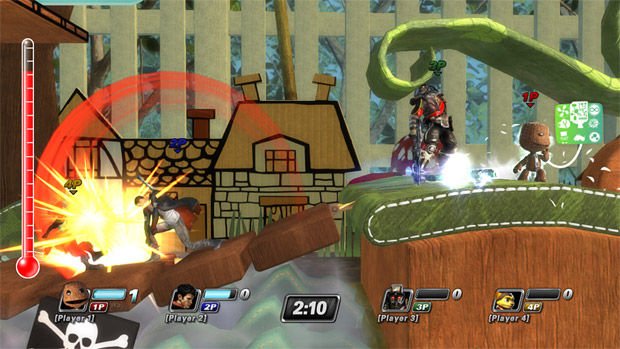 There are individual character tutorials that teach you every single move and some helpful combos, as well as general tutorials with separate rankings depending on how well you perform. You can battle with up to three other players or AI opponents at your heart’s content, with five AI difficulty levels.

Provided you’re OK with straight combat and no distractions, you’ll get a lot of solo mileage, especially since the max-level AI fighters can actually give you a run for your money (try 2v1 against two level-five computers for a good time).

If you get lonely, you can always jump into All-Stars‘ online modes, which feature ranked tournament play, quick matches, and a cross-play PS3 to Vita functionality. Although this review is for the PS3 version, the Vita copy of the game is 100% identical (outside of pressing the screen to pick up items occasionally in lieu of R1). I had no issues connecting to other players who were on a Vita — it was like nothing was different, and it simply worked.

As you fight with each combatant, you’ll “rank up” with them and unlock new player cards, intros, costumes, victory themes, icons, and mascots (that cheer you on in battle, and in your intro). They’re mostly minor details, but the game notifies you with a tiny icon in the extras menu every time you unlock something new, and they give you a chance to earn something for playing over and over. 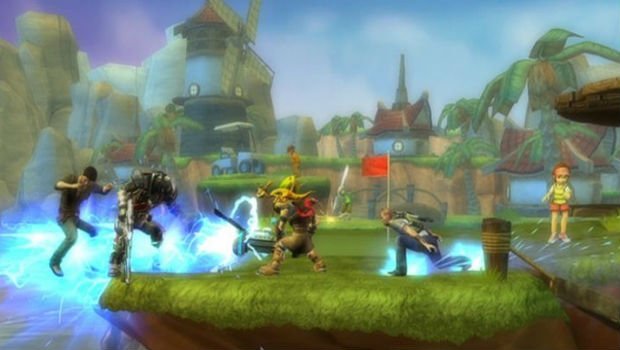 To earn absolutely everything, you’ll most likely need to play at least a few hundred matches across the game’s 20 characters, which will keep you going for quite a while. You can count on DLC as well, and the first two character add-ons have actually already been revealed as free downloads.

PlayStation All-Stars Battle Royale had a lot to live up to, and was a bit of a gamble for Sony. It had to successfully marry both casual and hardcore audiences together, provide a solid fighting game base, and offer enough variety to keep players going and trying out new characters.

For the most part, barring the half-hearted campaign, they’ve greatly succeeded. If you find yourself playing Smash Bros. into the wee hours of the morning with friends, you should enjoy PlayStation-All Stars: provided that you have at least some affinity towards the franchises that take part in this tournament.

There is certainly room for two major players in the genre of arena fighting, and Sony has done well in taking up one of those coveted slots.