A strange but fun mix of genres

Side-scrolling beat-’em-ups are a dime a dozen. In every arcade corner and on every console, you’ll see hundreds of variations on the genre from River City Ransom to The Simpsons, right down to the pixelated prowess of the Scott Pilgrim game. With every title, the developers try to bring something new to the genre, while also keeping the gameplay familiar and fun for those who love this style of game.

Phantom Breaker: Battle Grounds is the newest entry into the beat-’em-up genre, based on a franchise you may not be familiar with and using a style that is at once uniquely its own while still being generally familiar. No easy task, to say the least.

As the game begins, you’ll be instantly charmed by the chibi-style characters and colorful sprites that adorn the opening cut scene. Apparently, there’s a bad guy named “Phantom” who has kidnapped the sister of one of four warrior girls, and they set off in a quest to reclaim her. After the first battle, they’re stripped of their powers and sucked into a dimensional vortex where they must fight their way through and reclaim their abilities, as well as rescue the aforementioned sister.

Apparently, Battle Grounds is actually a spin-off of Phantom Breaker, a fighting game that has been stuck in localization limbo for over a year now, which is why you probably haven’t heard of it (though they’re still saying it’s “coming”). This also helps to explain the gameplay.

While most side-scrollers are button-mashing forays into carpal tunnel syndrome, Battle Grounds adds something a bit different to the mix. Namely, the variety of moves. Since it’s a spin-off of a fighting game, your button layout — featuring weak, medium, and strong attacks plus a special-move button — combined with directional input, allows for a wide variety of combo attacks with which to decimate your foes.

Characters can dash, guard break, guard cancel, and even jump back and forth between the background and foreground to fight enemies. Build up enough damage in the “Burst Gauge” and you’ll be able to unleash a variety of special attacks by pressing either the medium and strong attacks or strong and special buttons, most of which cause area damage to all foes. 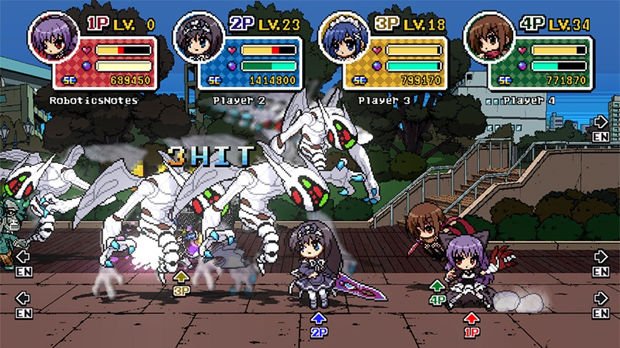 As you attack, damage count and number of consecutive hits appear above enemy heads as foes drop gems, which you use to level up your character between missions in an attempt to gain back your powers. There’s even a small skill tree where you can divvy up points and attributes. Though it’s nothing too involved, it’s a nice addition to what could usually be just a stagnant beat-’em-up.

This diversity makes Battle Grounds stand out above the normal side-scrollering action games, but it’s not all the tricks it has up its proverbial sleeve. Obviously co-op is the preferred mode of battle here, and PB: BG allows for both online and couch co-op play, which eschews all notions of plot for outright butt-kicking.

There’s also a single-player story mode (where you’ll clearly find the plot missing from the co-op), and an arcade mode where you try to beat high scores and clear times. Finally, there’s Battleground Mode, where you fight not with but against other players. It may not be a traditional fighting game, but the option is there.

Initially, there are four warriors to choose from, with more unlockable as you play through (and a fifth available soon in DLC that also raises the level cap to 99). There’s sword master Mikoto whose sister has been kidnapped, spear-wielding “Shrine Maiden” Waka, Itsuki “the ally of justice” with her magic hammer, and ninja girl Yuzuha, and each character has their own unique look and play style.

The old-school sprite graphics really lend themselves to the gameplay, and the level design adds to the overall feel of the game. Real Japanese districts such as Akihabara look fantastic (with realistic landmarks sprinkled about…albeit with parody names such as “King of Burger”) and the 2D stylized look set against the sprites is great, making it look like an anime convention exploded across the city as you fight business men wearing otaku cat ears and giant demons. The audio is also fantastic, with a chiptune score punctuating the old-school action. 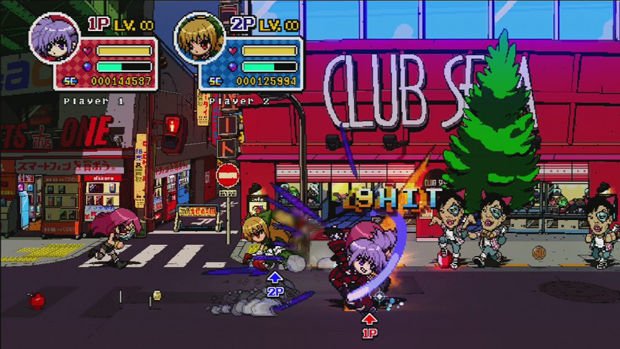 Not everything is perfect, however. While there is a good variety of moves to perform, button mashing will yield the same results. Online play is great, but there’s still a good deal of lag which hampers the experience a bit. As is the issue with all beat-’em-ups, it can get a tad repetitive after a while, with multiples of the same enemy type showing up with just a palate swap to differentiate them.

And since the game is heavily inspired by fighting games, it seems to favor the d-pad more than the analog stick, which may have to you leaping to the background when you don’t wish to due to the Xbox’s poor directional pad control. Still, all that said, the game is a blast to play, and one of the simplest to pick up and start battling with.

With its colorful characters, gorgeous sprite graphics, 8-bit tracks, and multiple game modes, there’s a lot to love here. I must admit, while I wasn’t familiar with the fighting game on which it’s based, I’m seriously hoping it passes through localization, as I’d love to play that title as well. Whether playing couch co-op or online, it’s a great way to spend an afternoon with friends, though hopefully they’ll patch for having a more stable connection for the latter.

Phantom Breaker: Battle Grounds is a simple game that anyone can pick up and play, but belies a deeper feel for combos like a traditional fighting game would, while adding a minimal skill tree for damage and speed boosts like an RPG. It’s deep without being too deep, which makes it just the right amount of fun.