Phantasmal: City of Darkness has a killer pitch. A procedurally generated horror game that takes its inspiration from games like Silent Hill and horror staples like the novels of H.P. Lovecraft, set in the extra super spooky walled city of Kowloon. That sounds like a game that has something interesting going on, something I really want to play.

Sadly, it isn’t. Phantasmal squanders its unique qualities with an embarrassing array of bugs, poor design choices, and annoyances. It flat out does not feel like a finished product, despite coming out of an extended Early Access development process. I don’t think I’ve had a more frustrating or less enjoyable time playing a game in years. 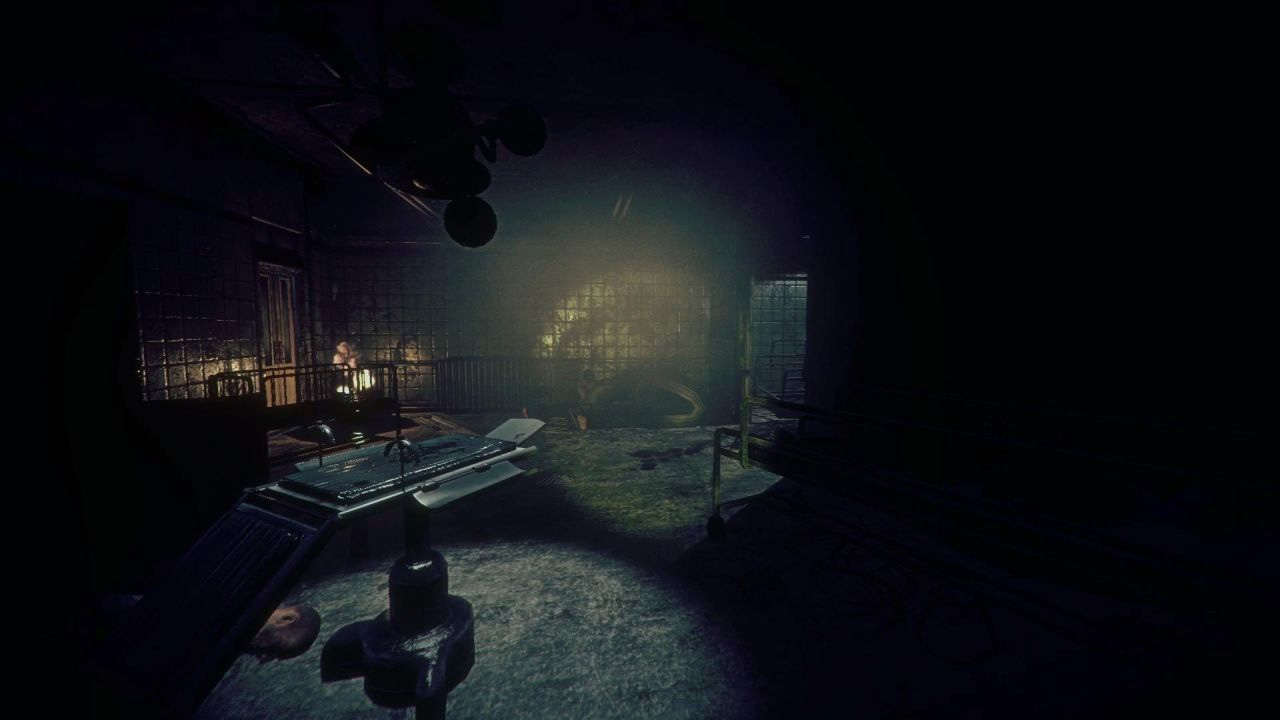 The good news is that in stills and screenshots, Phantasmal looks spectacular for an independent game. Looming shadows, light filtered through thick dust suspended in the air, and flickering fluorescent bulbs establish an oppressive and dangerous tone. The heavily detailed environments are so convincingly grimy and distressing that I wanted to take a shower after stepping away from the keyboard.

Unfortunately, that care and nuance only extends to the set-dressing and background. Once the game begins and things actually have to be rendered in motion, the facade slips away and the game’s unfortunate, misshapen, true form is revealed. Outside of the fantastically realized hallways and background details, everything else looks like trash.

The UI is shoddy and garish, casting thick bright blue highlight lines on every intractable. Environmental elements that aren’t drawn on the walls like the (noticeably gigantic for some reason) bottles strewn everywhere, or the never ending supply of random trash bags, look cheap and out of place. 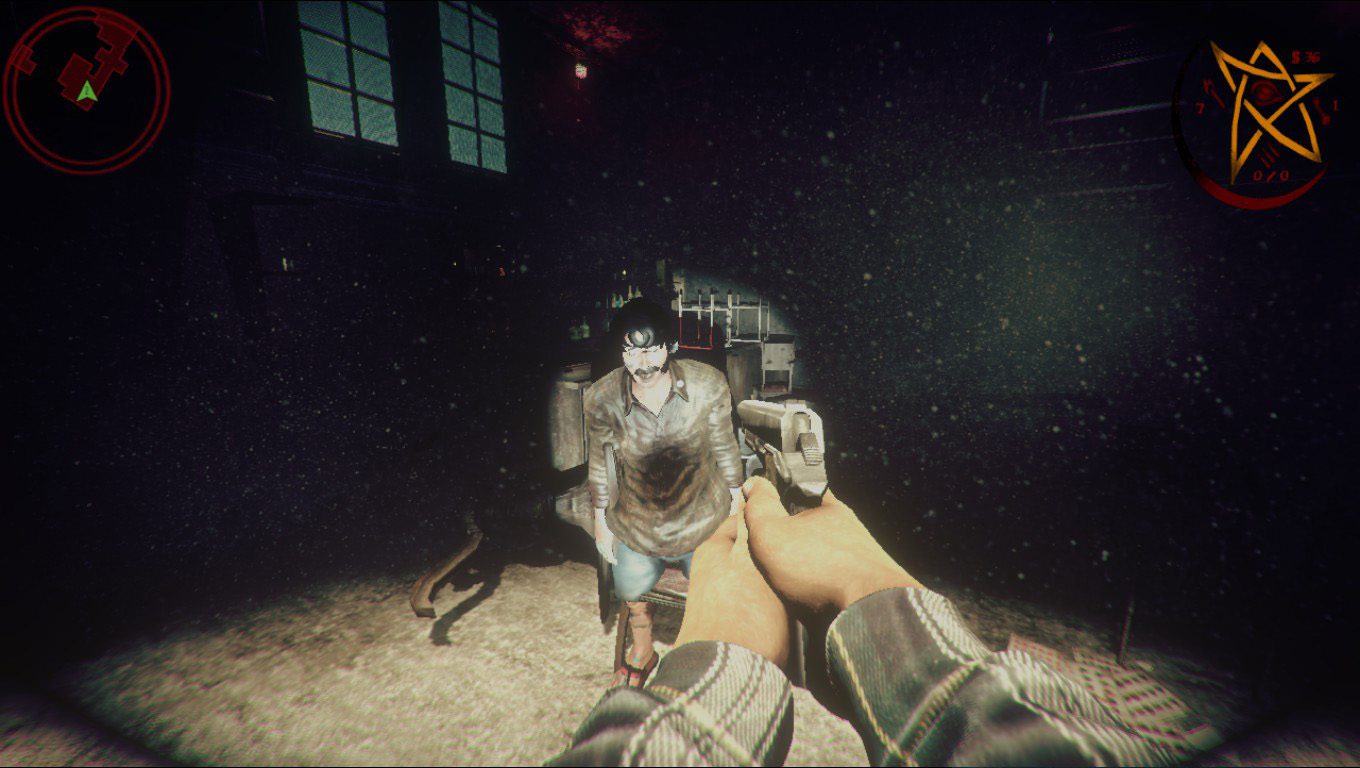 Worst of all, though, are the junkies and creatures that litter the hallways. Crawling addicts with low-detail models awkwardly shuffle towards you at a janky and unpredictable pace with unconvincing animations. Distended, fleshy monsters freely clip through doors and walls as they glide/walk straight for you like a heat-seeking missile. The poorly realized NPCs completely undermine any kind of frightening atmosphere. They’re more like the cheap homemade animatronics you’d find at the local Halloween Haunted Barn attraction than cosmic horrors.

Phantasmal takes many of its gameplay cues from the original Amnesia, with a sanity meter that must be minded as closely as your health. Lingering in the darkness too long or staring directly at some of the more disturbing monsters erodes your grip on reality. Unfortunately, this doesn’t lead to any cool, trippy surprises like Eternal Darkness, it just means your vision gets a wobbling fish-eye lens effect and VHS tracking errors straight out of a cheap found footage horror movie. 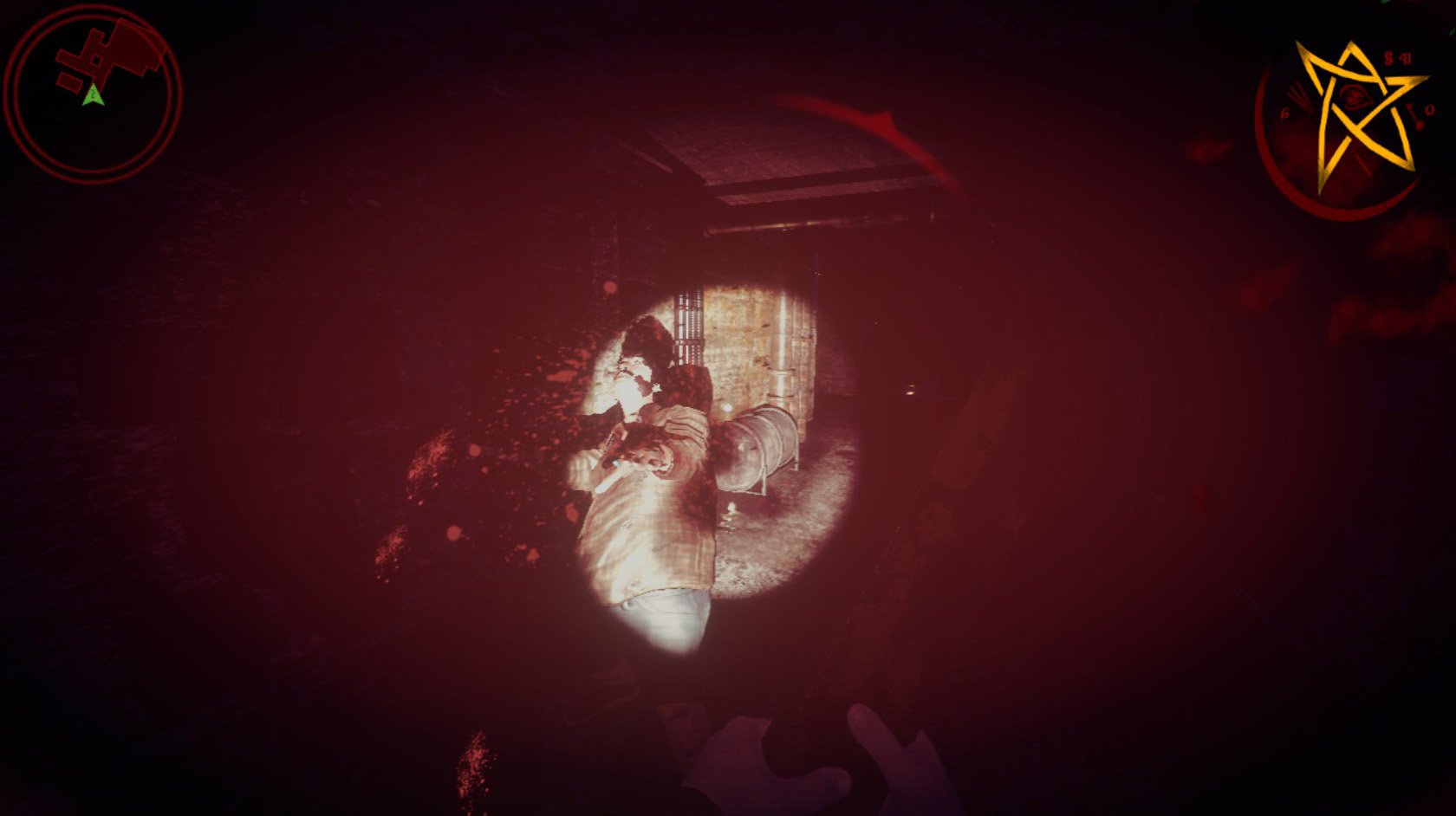 The extra blurriness of insanity only compounds what is already a confusing and often times visually incomprehensible experience. It took me a long time to adjust my gamma and brightness settings to a place that felt fair to the game (creepy shadows and darkness to crawl through, but actually playable) and even still, some areas were either too darkly lit or way too bright and washed-out to navigate. Phantasmal is big on screen-shake and motion blur, with just about every combat experience descending into a frantic, blind button mashing affair at the best of times. Having extra Vaseline smeared on the screen thanks to spooookiness doesn’t make things any more enjoyable.

At its core, Phantasmal is a game that wants to serve two incompatible masters, and it never recovers from this fundamental design flaw.

The levels are procedurally generated similar to a roguelike, with different hallways, areas, enemies, and supplies every time you play. The idea is that the game will always have the potential to surprise, which I think is a decent ambition for a horror title. Plenty of horror games are “one and done” experiences because the scares don’t work more than once, so trying to build re-playability into the experience is an interesting, and laudable goal.

However, it also wants to be a stealth game with a heavy emphasis on exploration. Like so many other horror titles, the game incentivizes the player to avoid combat by making the player fragile, limiting supplies, and making the combat feel as limp-wristed and unappealing as possible (that last one may not be completely intended). This is where everything breaks down. 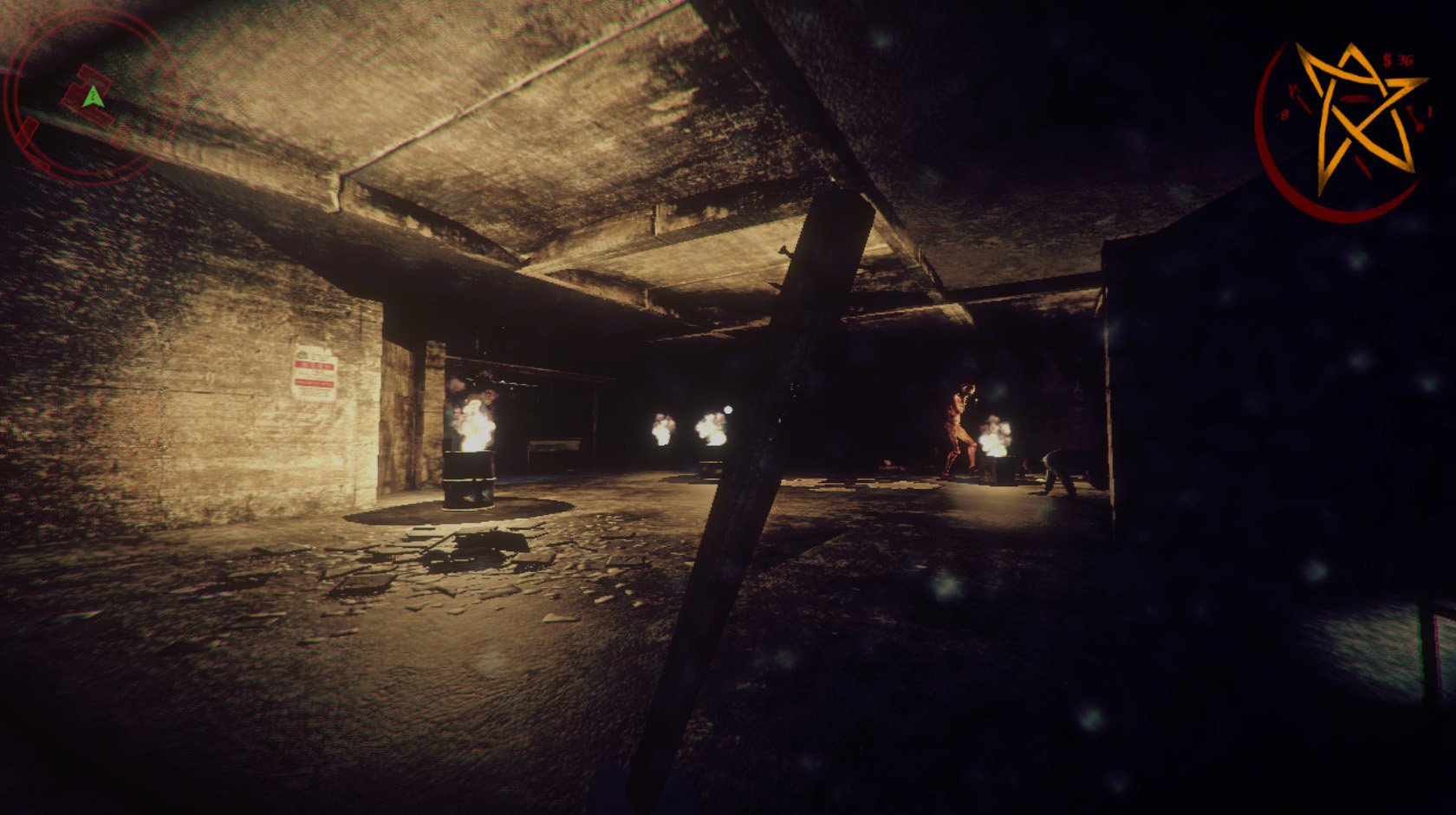 Think of a great stealth game, something like Mark of the Ninja, or The Phantom Pain. These are games that are either immaculately designed, with every enemy placed in very specific positions and designed like a puzzle, or, they empower the player with a huge array of tools and abilities to allow them to find a variety of creative stealth solutions. Phantasmal just tosses you into a hodge-podge of random hallways and enemies and then wags its creepy finger at you when you can’t magically sneak around an enemy trapped in a doorway.

You get a few throwable flares at the start of the game that may or may not distract an enemy long enough to get around them. Other than that, your “options” are to sit and wait in the darkness with your sanity meter depleting hoping they’ll move someday, or rush in and smack the stupid monster with a two-by-four and hope the noise doesn’t summon more of the bastards (hint: the noise will always summon more of the bastards).

I played run after run and kept encountering annoying situations. Enemies staked out in the middle of a small sewer tunnel who refused to move. Junkies crowded around an elevator lift that I had to get into. Faceless monstrosities enjoying a tea party on the landing to a set of stairs. 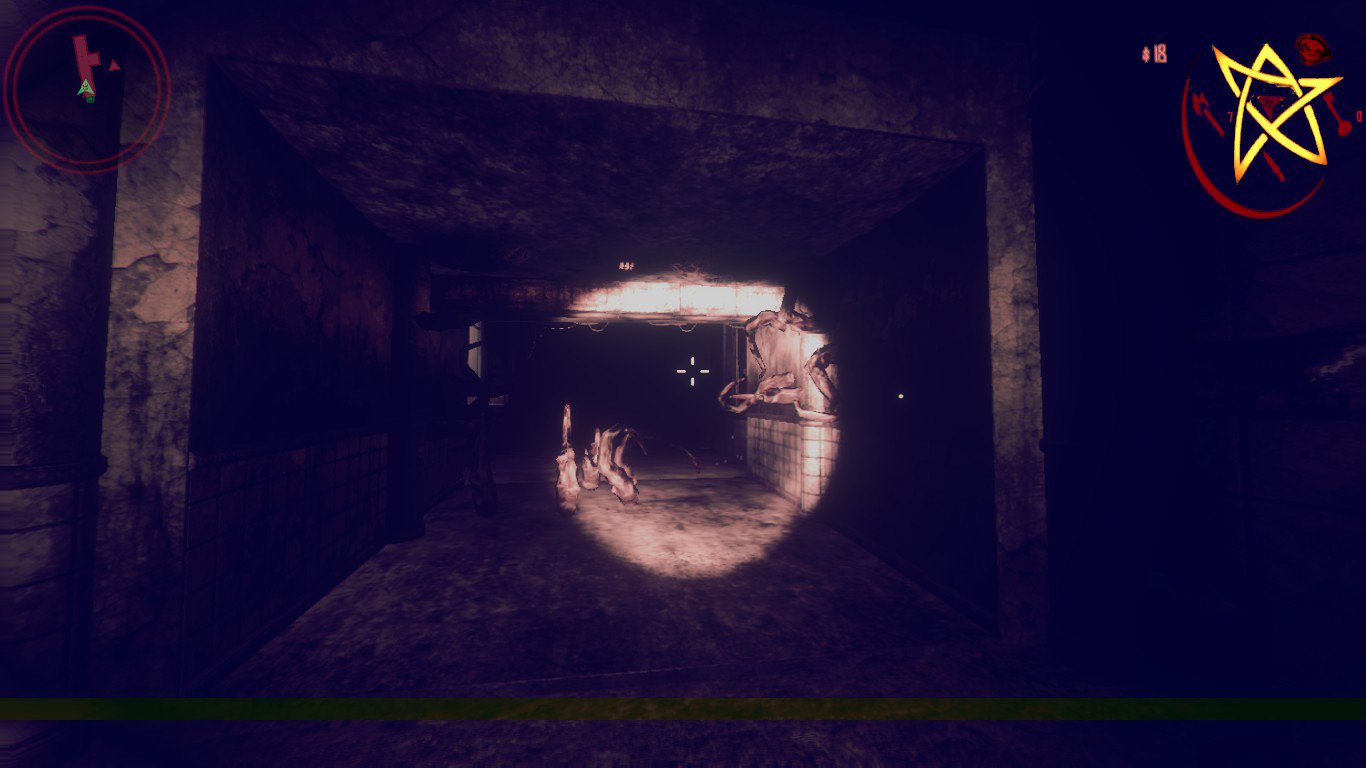 Of course, those annoying situations were preferable to the impossible ones, where the game failed to randomly generate a clearable path out of a level. More than once I found myself fruitlessly searching around for a door or elevator that would allow me to progress, only to find myself wandering in circles. One time, it happened the very first hallway after starting a new area, so I know it wasn’t just me being a jackass. The procedural generation just isn’t reliable.

Enemies are super aggressive and tend to swarm the player once activated. Particularly grievous are the giant spiders you start encountering in the fourth level or so, who skitter along the walls, the roof, and (somehow) in the air, and pop in-and-out of existence at a whim. Nearly impossible to shoot and difficult to smack with a melee weapon, their presence tends to mean the end of a current run as you lose most of your health, all of your ammo, and probably break your stupid pipe or whatever on the wall trying to hit them. I suppose I should count myself lucky, a recent patch note indicates they were recently made “easier to hit” so I guess they used to be even worse. 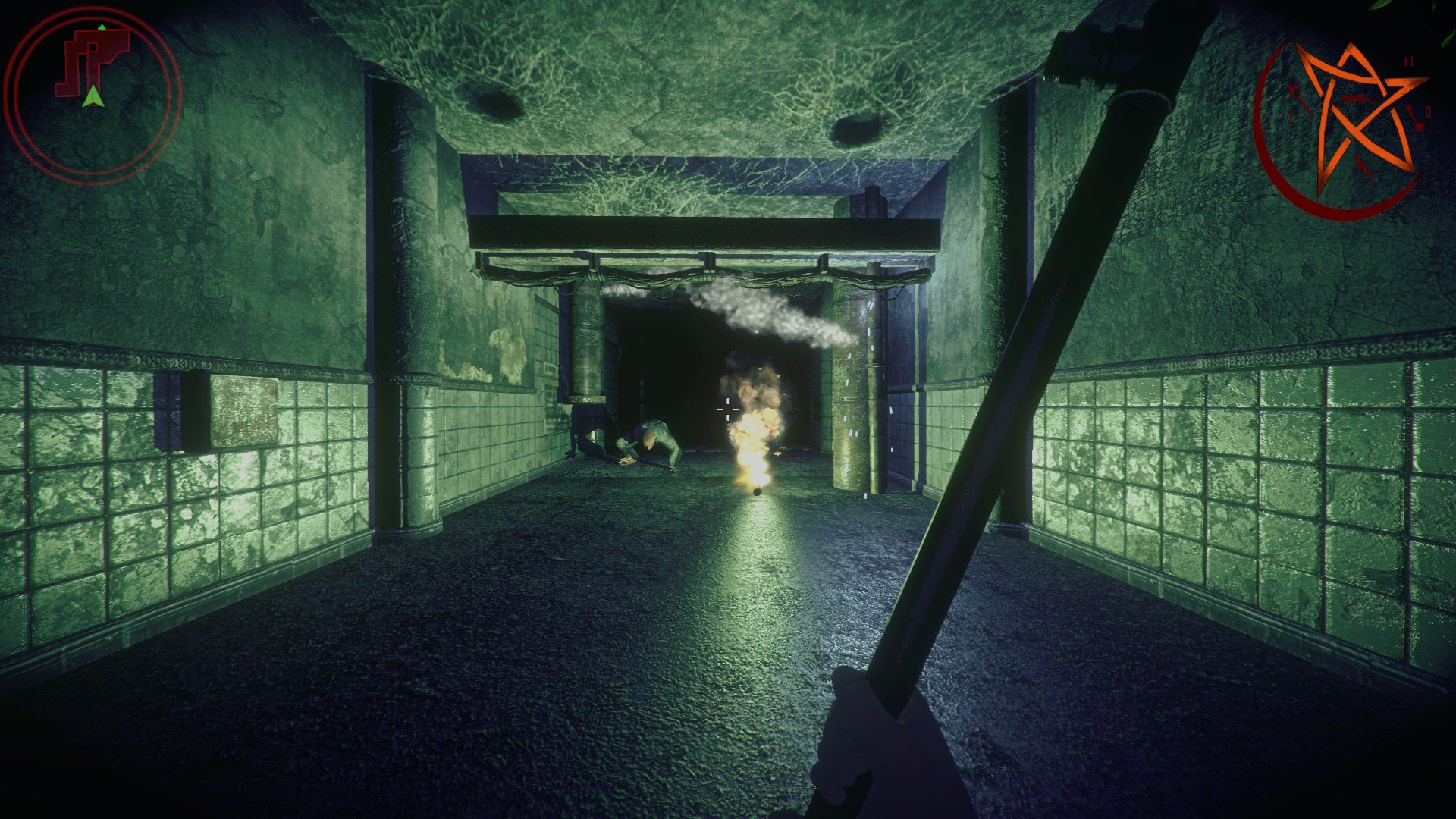 It doesn’t help that every bit of movement in Phantasmal feels like a chore. While you’re expected to sneak around, not make any noise, and artfully run away from monsters when spotted, the player character’s hit-box feels bizarrely huge, like it extends an extra two feet in every direction. Wandering around the hallways, I constantly snagged on every single physics-enabled object in my general vicinity. Shattering glass bottles several feet way, tangling myself up in hospital beds and chairs, it felt like I was a man assembled out of a collection of coat racks.

I’m not sure if I can accurately convey just how much of a pain in the ass it is to simply move from point A to point B in this game. Stairs are a major obstacle. Depending on how high each riser is, some sets of stairs are simply impassible if you’re using the crouching sneak movement, while walking normally on them feels like pushing through water as you slowly grind your way up a flight. You can sprint, but whoopsie-daisy, that just summoned another monster to come and rip your face off. Trying to skulk around something like an abandoned bar littered with chairs, tables, and Mahjong sets is a tragi-comedy. Like Inspector Clouseau trapped in a sumo-suit trying to tail the Pink Panther. There won’t be a single thing in that bar that isn’t upturned, knocked aside, or reduced to splinters by the time you make it out the door.

Similar to the set-dressing, the ambient sound design in Phantasmal is quite good. Spooky clanking in the distance, ominous rumblings, the sharp crack of a nearby lightning strike, it’s all surprisingly well done. Again though, that’s only the set-dressing. The actual gameplay relevant sound effects are all over the place. The opening intro comic and subsequent plot revealing journal entries are dully narrated by what sounds like a gentleman whispering into a desk microphone.

The volume and urgency of other sound effects vary wildly. Tipping over a bottle on the ground sounds like you just toppled over an entire display case of porcelain figures, while the mighty shotgun (should you be so lucky to find one) sounds like a car back-firing down the block somewhere. Distant, inconsequential, and weak.

Somehow, this game even stole the joy of shotgunning monsters in the face from me. 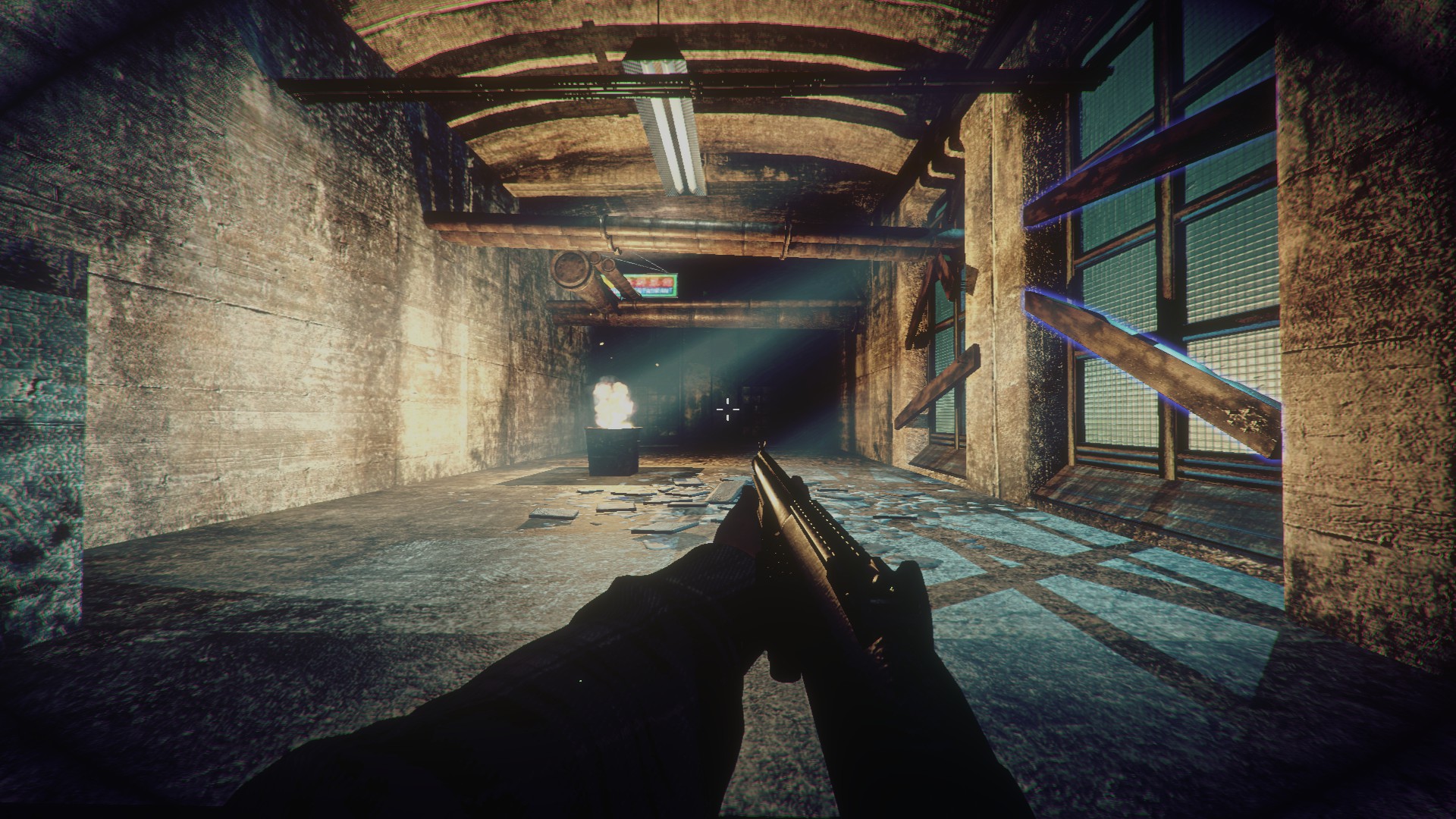 As a quasi-roguelike, Phantasmal expects you to die frequently. Every death means starting from square-one (there are no checkpoints or level saves to speak of). On the plus side, there is a progression system of sorts in the form of purchasable upgrades. Just outside the hallway where you start is a shop where you can spend coins you’ve found (unlike other items, coins carry over from death to death) on small stat increases that raise your max health, make your sneaking movement faster, sprint longer, that sort of thing.

The downside is that the stat increases are barely noticeable and cost an absolute fortune to purchase. The rock bottom basic upgrades cost 50 coins a piece and the prices sharply rise to 150 and beyond after that. In a typical run where you somehow manage to get down to level four or five, you might collect 20 or so coins, 25 on a lucky day. Somehow, the developers have the gall to expect you to play through this hinky, unfun mess of a game dozens upon dozens of times to earn a piddly extra second or two worth of sprint, or the great fortune to carry a max of 25 bullets instead of 20. Screw. That. 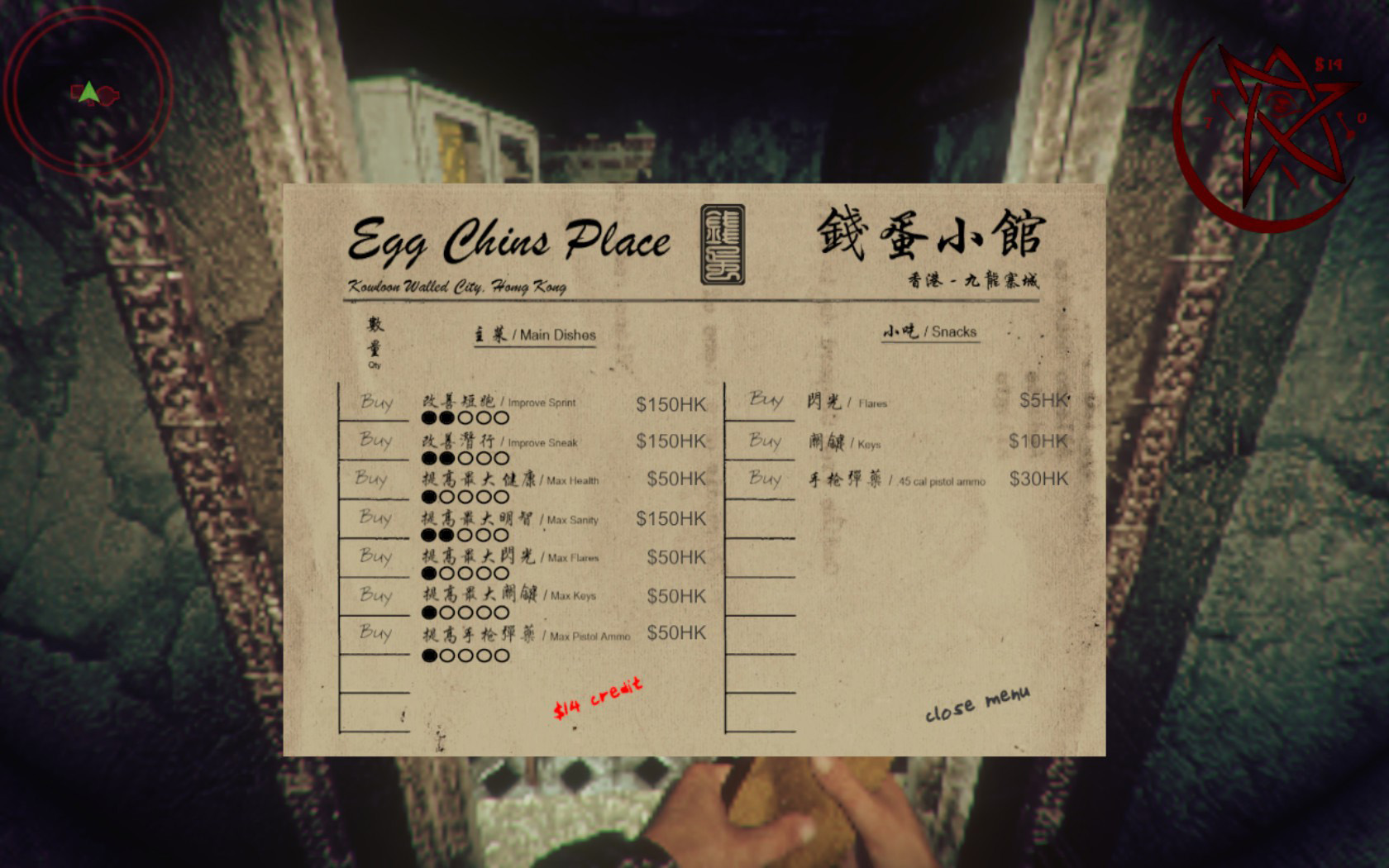 It’s my instinct to be a little gentler to indie games like this. I appreciate that this was made by a very small team who, looking at their interactions in the Steam discussion forum, seem like genuinely nice guys. I ADORE the premise and setting (just saying “a horror game set in the Kowloon walled city” still gives me goosebumps) and the idea of a roguelike horror romp is something I think is worth exploring.

However, there are videos and articles that go back more than a year listing the exact same flaws and problems with the game that I personally experienced. Eyemobi has had plenty of time and feedback to fix or alleviate these issues, and it looks like they just decided not to. Pulling this out of Early Access and slapping a “done” sticker on it doesn’t make those issues go away, and being a small team isn’t a free pass for shipping a dumpster fire.

There is obvious talent at work behind Phantasmal. The lighting and setting are amazing and there are some great ideas buried way underneath all the bugs and issues. I hope they can learn from the mistakes of this title and release something that lives up to the potential that they display.