It’s still tough to believe a fighting game based on the Persona series exists, let alone is any good, but Persona 4 Arena certainly came as a pleasant surprise. Atlus and Arc System Works are two distinctive studios known for creating very different types of experiences, but somehow managed to meld their unique strengths into a stellar fusion.

It must have been a difficult task, trying to charm two disparate audiences at once, but the developers proved more than capable of surmounting the challenge. Now they’ve returned with a followup in Persona 4 Arena Ultimax, hoping to make lightning strike twice. 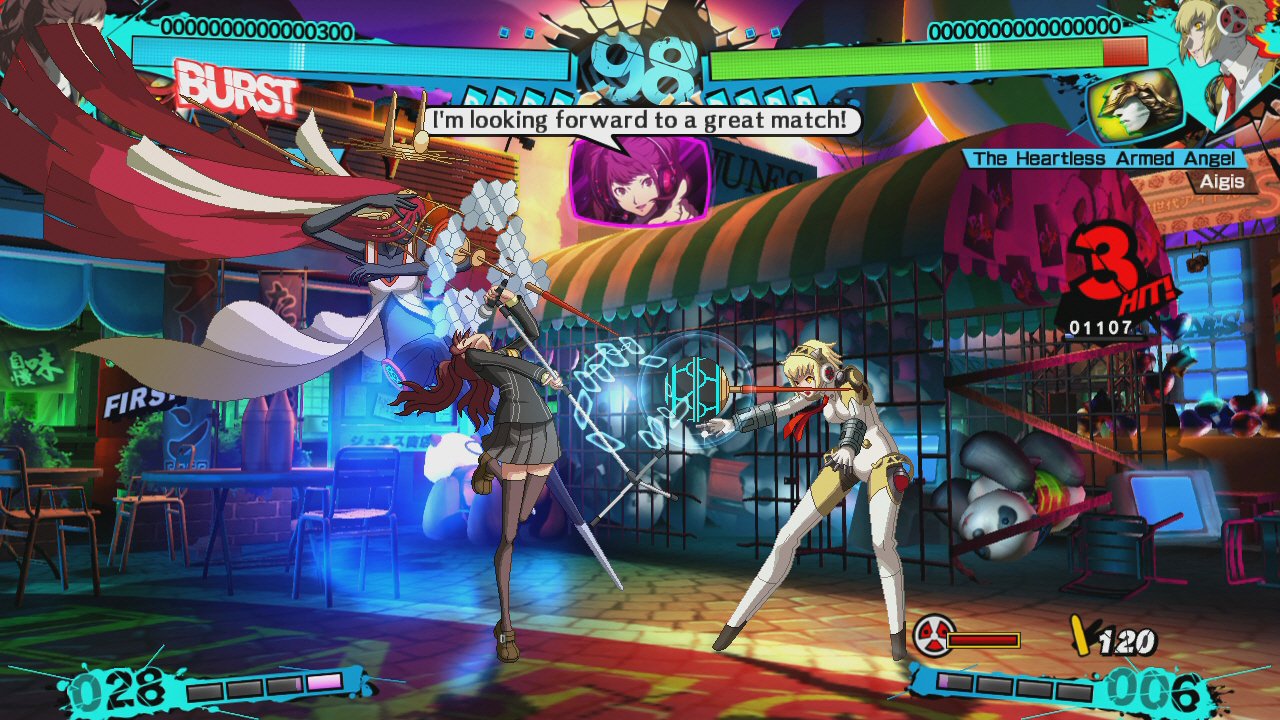 Ultimax picks up right where P4A left off, taking place almost immediately after the events of the first game in the familiar setting of Inaba. The region suffers a blackout and suddenly is blanketed with a mysterious red fog. It isn’t long before shadowy doppelgangers appear and our heroes are thrust back into the ring.

Unlike most fighting games, Ultimax honors its RPG lineage by offering a substantial story mode. The narrative plays out much like a visual novel, featuring an abundance of dialogue, glossy character art, and vintage tunes from composer Shoji Meguro. Oh, and there’s a handful of fights tossed in there every so often.

The story is divided across two campaigns, one focusing on the cast of Persona 4, while the other centers around the group from Persona 3. The tale takes place from several vantage points, and struggles with the new structure. You will be forced to witness repetitious events, as one character comes to grips with what’s going on, only to see someone else go through a similar scenario. Eventually these threads intertwine and the story picks up, but until then it can be a bit of a drag. 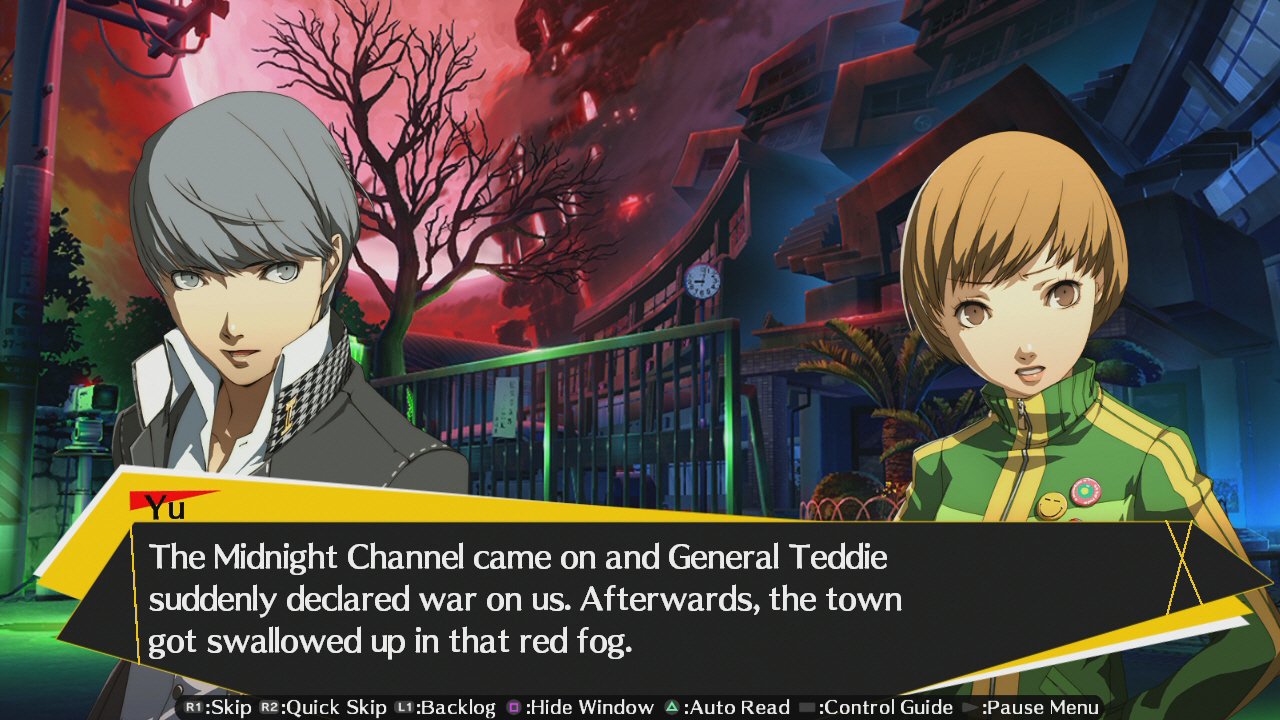 Really though, the conceit is just an excuse to spend more time with characters we know and love. The opportunity to catch up with Yukari Takeba, Junpei Iori, and Ken Amada is a real treat, as the new combatants join the roster and give us a glimpse at what life is like after the events of P3. This isn’t the strongest Persona story, but it certainly has its moments.

Maybe you didn’t understand anything I just wrote, though. Perhaps you’re here for the combat and couldn’t care less about Persona. Well, Arc System Works still has you covered. This is an exceptional fighting game, irrespective of the source material. It’s just one fans of the series will be able to appreciate on a different level.

Ultimax is the type of experience that takes a day to learn and a lifetime to master. It’s simultaneously accessible and incredibly intricate, providing newer players a shallow end of the pool to play in, while veterans are given the tools to go deep sea diving in the Marianas Trench. 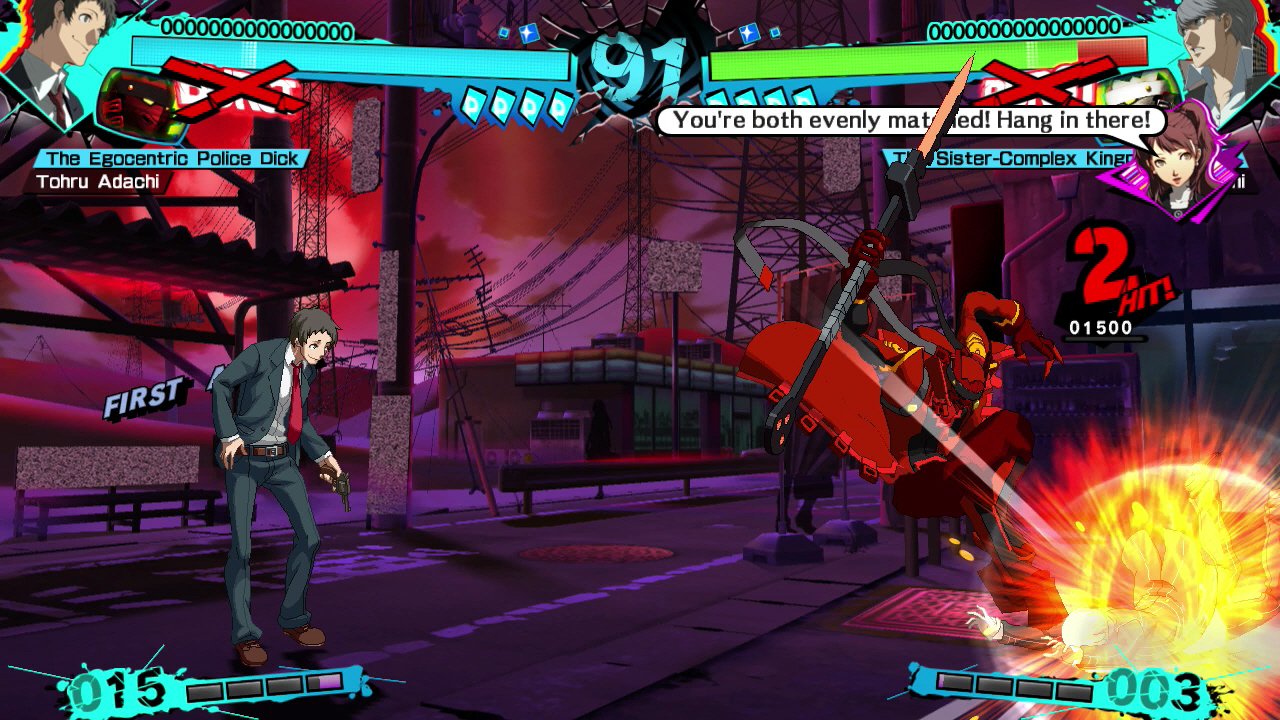 The fighting engine at work here has a myriad of sub-systems, but is constructed to be incredibly flexible. Hammering on the light attack button will launch the character into a string of impressive-looking combos, which can feel gratifying for the type of person who has trouble pulling off quarter circles consistently.

On the other end of the spectrum, there’s an incredible amount of nuance to be discovered for those who wade out of the shallows. Much like with Guilty Gear and BlazBlue, Arc System Works has created a fighter with a satisfying sense of weight and momentum. It’s fast-paced and the animation is amazingly fluid, which is something everyone can appreciate —  whether for focusing on landing those one-frame links or just for the spectacle.

Ultimax also helps bridge the gap between players of varying skill levels with its practice modes. The lessons on hand here go at great lengths to communicate the basics, and really set beginners on the path to mastering the systems at play. 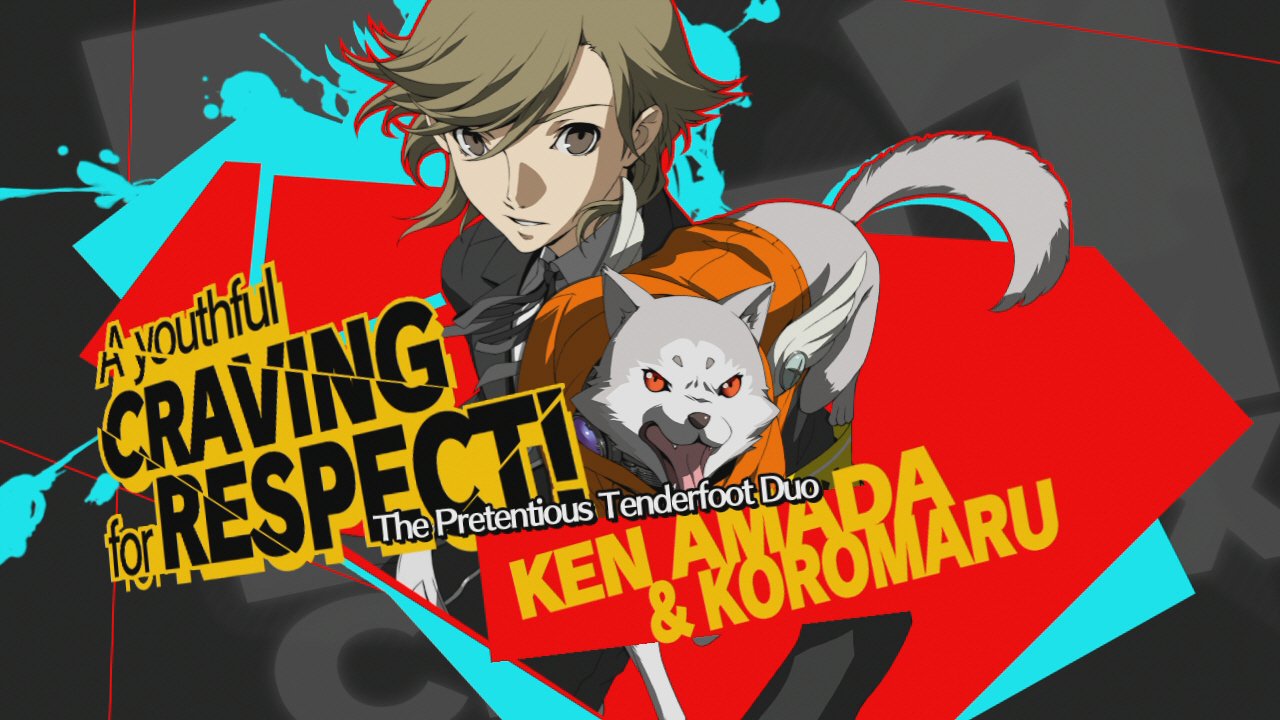 The game’s real strength is in its roster, which is sure to please Persona fans and fighting game aficionados alike. There’s a wide variety of characters with equally diverse play-styles, ranging from keep-away and rushdown characters to zoning types and grapplers. There’s something here for everyone.

One of my favorite parts of the experience is how faithful it is to the source material. Little things like new addition Rise Kujikawa swinging around a microphone stand in battle or just seeing Persona Skills and All-Out Attacks recreated so lovingly in a fighting game make the moment to moment gameplay such a joy.

Aside from Rise and the trio of new P3 characters, the most notable addition is newcomer Sho Minazuki. Sho is the game’s antagonist and comes in two forms, one of which doesn’t have a Persona. To make up for that shortcoming, he’s incredibly fast and powerful — maybe a little too fast and powerful. I suppose time will tell if that is the case. 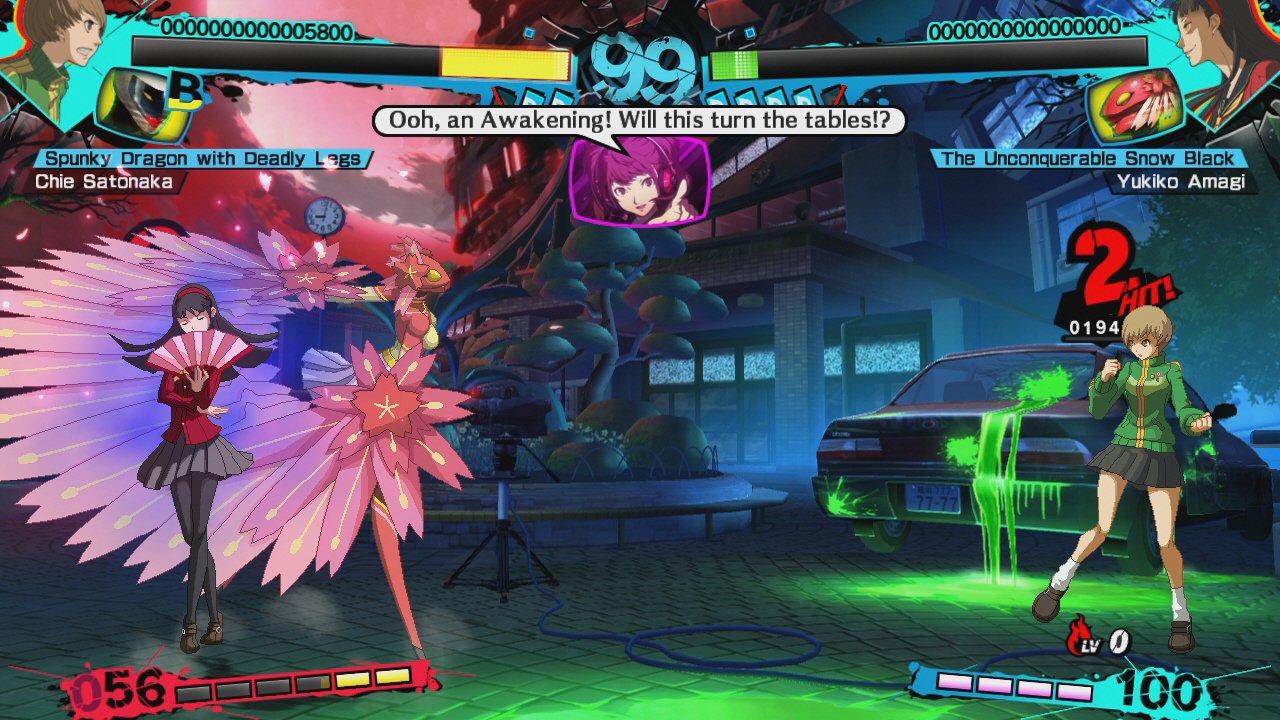 Most of the characters also come equipped with Shadow variants. These are more precarious skill-based fighters that sacrifice normal attack damage, defense, and instant kills. In exchange, they gain the ability to carry SP across matches and rampage, granting them an infinite amount of SP for a limited time. So look out for that!

Beyond the story and standard modes like arcade and versus are score attack and the Golden Arena, which should be something of a curiosity for anyone looking for a more RPG-like experience. While the main game already incorporates little touches like temporary status ailments for players who fight too defensively, (in an effort to encourage aggressive play) the Golden Arena lets you fight through “dungeons.” There, you will attempt to survive while leveling up, improving your stats, and learning new skills. It even involves building Social Links with your navigator character. 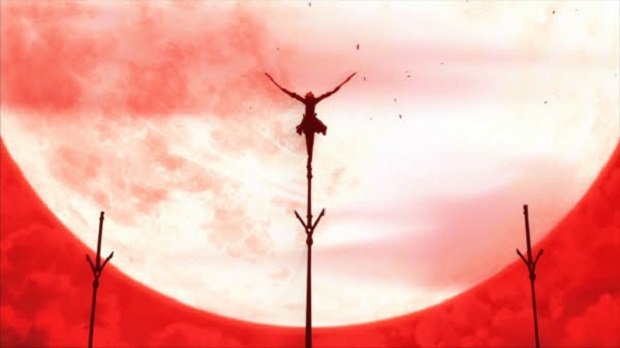 The netcode seems largely unchanged from P4A, which was just fine. My tests with the online features were lag free and completely functional. One new component is a lobby area that is set up to look like an arcade. It’s a nice little addition that allows you to design a Persona-style avatar and sit down at a cabinet with another player to initiate a match. Yep. It’s pretty adorable.

Persona 4 Arena Ultimax is pretty much everything a fan could ask for. It’s a satisfying, high-octane fighter that’s synchronously accessible and fathomless. Atlus and Arc System Works have forged an experience that tops its predecessor, adding new content, characters, and story to the mix; thereby coming as an easy recommendation to both Persona fans and fighting game enthusiasts alike.