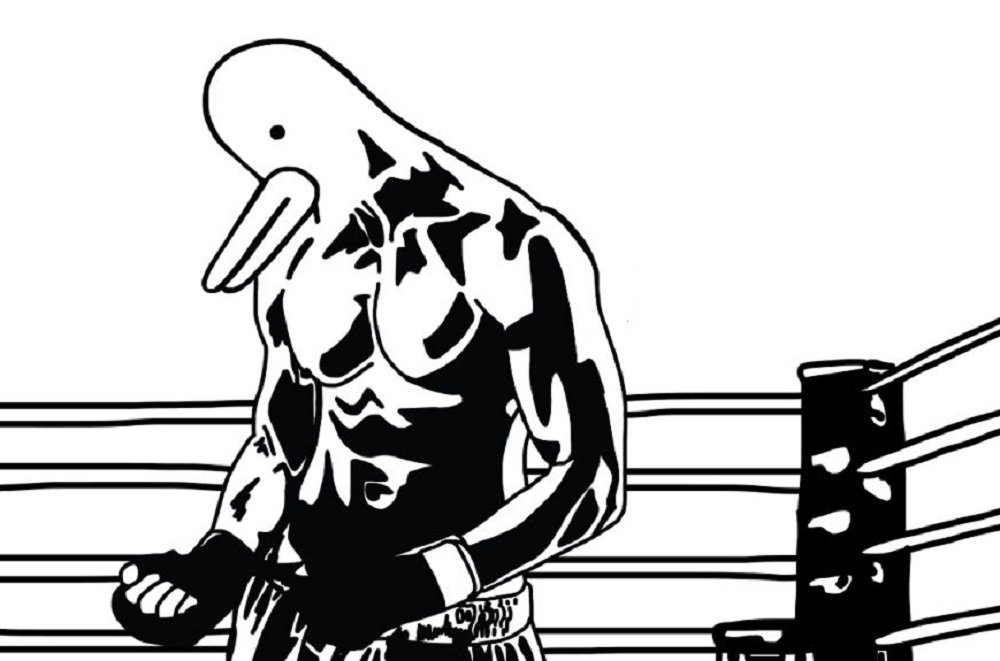 Primo, known to his fans as Patobox, coulda been a contender. One of the best pugilists in history, and the pride of sponsors Deathflock, Patobox climbed to the beak peak of his profession, dropping challengers again and again, ultimately becoming the greatest of all-time…

And he did it all whilst having a duck’s head.

But things have gotten rough for our boy Primo who, after falling in a controversial bout with up-and-comer Kilpatrick, was left dying in an alley, in a pool of his own blood. Rescued by a smoky, guilt-riddled nurse, and having lost everything, Patobox makes his way to Deathflock’s headquarters, vengeance burning in his beady little eyes. 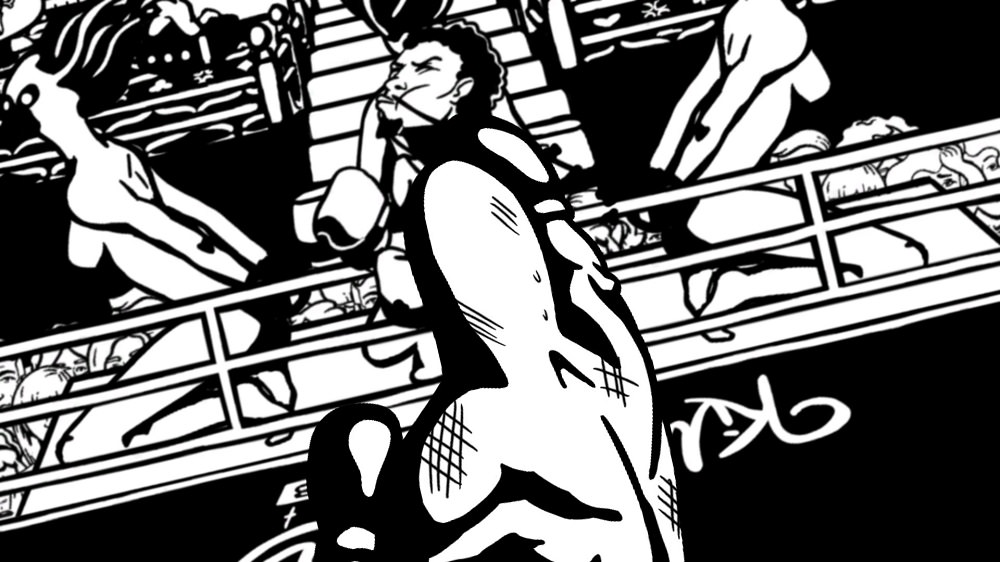 Pato Box is the child of independent Mexican outfit Bromio, funded by less than 400 Kickstarter backers. It’s a unique experience that occasionally lets itself down with some unfortunate flaws. But when things do fall into place in this hybrid adventure game, Pato Box really shines.

The game is essentially a series of boss fights, as Primo battles his way through his former employer’s headquarters. Anyone who has played Nintendo classic Super Punch Out!! will immediately recognise the game’s pattern-learning, rhythm-based mechanics, simple but deceptively deep. In between bouts of fisticuffs, players must explore Deathflock’s headquarters, performing side-quests, completing mini-games, and finding hidden objects in order to gain access to the next opponent on Primo’s shit-list.

Pato Box has a very distinctive art style. Entirely in black-and-white, the engine and cutscenes are drawn with a 2D comic-book aesthetic, all panels and speech bubbles. It is a stark design, with a touch of Frank Miller. This is also reflected in the narrative, which is surprisingly grim and, at times, particularly violent. Players will learn about Deathflock’s rise to infamy and future plans, as well as discovering its employees’ backstories. For its kooky setup, Pato Box is pretty fucking bleak.

Although there is variety in the tasks Primo must complete before he can face each opponent, the exploration sections range from good to mediocre. Some of the puzzles are more of a chore due to their simplicity, whilst a mad dash through a slaughterhouse suffers from frustrating depth-perception problems. On a positive note, there is very little repetition; each floor of the Deathflock building presents new ideas, be it shooting craps in a casino or stealthily creeping through a terrifying laboratory maze.

The fights themselves are the centerpiece of Pato Box. Each boss is unique in his or her own way. Though all based around pattern learning, fights stylistically range from straight-up bob-and-weave brawling to destroying drones, dodging laser beams, and even concocting a wicked soup. These moments offer genuine challenge, and some battles required such intense focus and concentration that I found myself almost hypnotised by the game.

This strict level of difficulty brings satisfaction in victory, but some may find the need for precise timing and lightning reactions an exercise in frustration. That’s on them, however. Pato Box is difficult, occasionally merciless, but it is a better game for it. I had the story finished in a little under seven hours, though I will return to collect all the hidden “Patokens” that I missed, and to relive some of those adrenaline-pumping punch-ups.

Although the story is populated with a roster of odd but alluring characters, and features a fun mystery (that develops far beyond Primo’s personal revenge), unfortunately Pato Box has text issues. Riddled with spelling mistakes and awkward grammar (of which I’m a bona-fide expert), there is a translation problem that prevents some the game’s dramatic moments from landing with the expected intent. Perhaps a small rewrite could rectify this in the future? 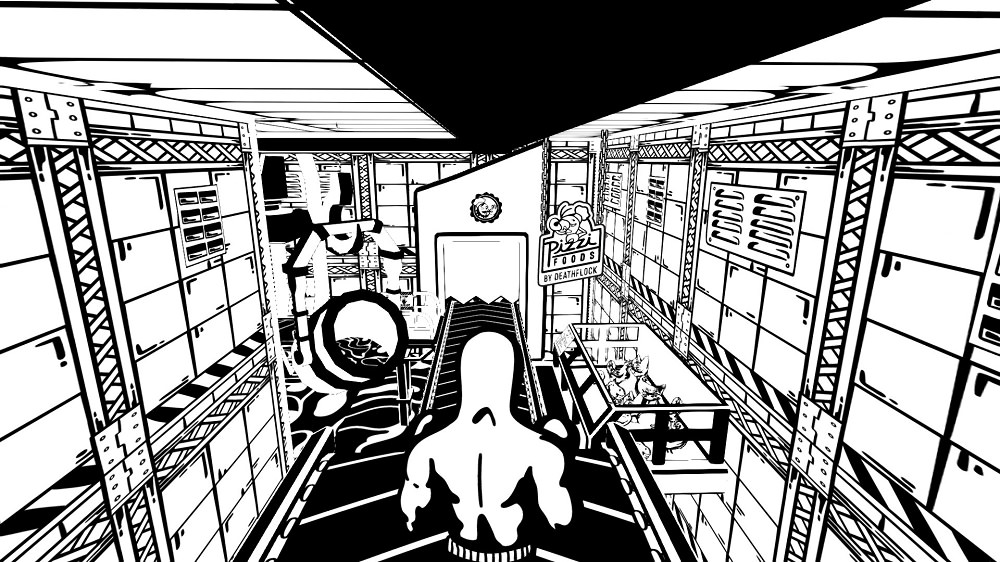 Pato Box‘s one truly flawless element is its amazing score. Created and performed by Abuquet, the soundtrack continues to improve as the story progresses. From noir-esque piano pieces, to haunting, humming basslines and ’80s style electronica, Pato Box‘s themes will appeal to anyone who has ever sunk into an armchair to the beat of Hotline Miami. The atmospheric, memorable music is the game’s golden goose… erm… duck?

I enjoyed Pato Box. I dug its weird story, flawed characters, and brilliant score. I found masochistic pleasure in its challenging, even brain-busting fights. But the game, undeniably, is quite rough around the edges, with an irregular save system, wonky text, and moments of bad design. It must be noted that as the ending approached, however, a lot of these flaws melted away in the wake of some intense final showdowns and a sky-punching climax.

Pato Box is one of the most unique titles I’ve played in some time. It has its share of problems, with an unorthodox style that might not be to everyone’s taste, but feels destined to acquire a cult following. Though quite flawed, it still has the ability to get the heart pounding, and sounds damn good while doing so. Pato Box fails to score a knockout, but it’s an exciting bout, and I’m certainly up for a rematch.