Beat and eat your meat

With the US release of Pandora’s Tower, the final title in the “Operation Rainfall” trilogy has been localized. Major props to XSEED for taking a chance at giving the Wii one last hurrah!

Pandora’s Tower is an action role-playing game that takes a few mechanical and thematic cues from other notable titles, such as Monster Hunter and Shadow of the Colossus. There’s even a dash of dating sim! The resulting brew is a little rough around the edges, but this adventurous tale of star-crossed lovers deserves to be played through to the end.

Neither a massive AAA extravaganza nor a quickly churned software side dish, Pandora’s Tower sits comfortably in the middle ground. And if there is anything that the Wii could have used more of, it’s chunky “middles” like this. 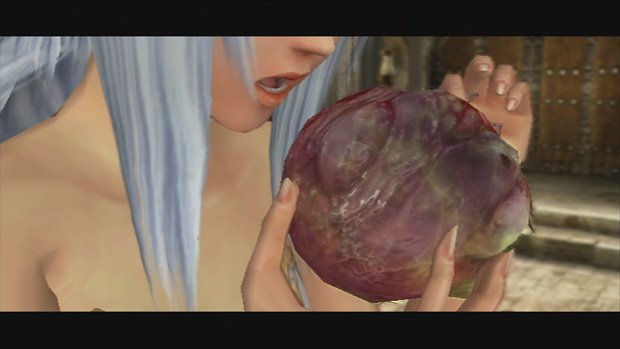 Pandora’s Tower is the story of Aeron, a soft-spoken former soldier, and Elena, a country girl chosen to sing at the kingdom’s Harvest Festival. The celebration was interrupted by a sudden monster invasion, after which Elena notices a mark on her back, the sign of a curse that slowly changes people into monsters. If not cured quickly, her transformation will be permanent.

With the aid of a traveling merchant named Mavda, Aeron whisks Elena away to the Thirteen Towers, a grand temple suspended above a massive rift in the planet known as The Scar. To temporarily curb the curse’s effects, Elena must feed on the flesh of beasts that roam the towers; to lift the curse entirely, she must eat the flesh of the 12 tower Masters. Ironically, consuming meat is forbidden in her religion — only through corruption can she find salvation.

As Aeron, you explore the towers in turn, defeating its monstrous inhabitants and literally ripping the meat from their bones. You acquire up to four different weapons, which can be upgraded using items strewn about during your travels, unlocking extended combos and deadly charge attacks. You can also equip armor, gemstones, and amulets to boost your stats, but should you receive heavy enough damage, they will break and require repairs.

The most versatile tool in your arsenal is the Oraclos Chain, a mystical artifact with a wealth of functions. You can bind enemies so they can’t move, lift and throw them into other creatures, pull switches, unlock doors, swing from hooks, and retrieve objects from a distance. It is with this chain that you tear flesh from monsters — use the Wii Remote to target a defeated foe and whip the remote back to extract the juicy meat. Depending on what part of the body you latch onto, you can carve out metal fragments, bones, and other objects, many of which can be used to forge even more items and equipment.

Useful though the chain may be, the camera sometimes thwarts your ability to target the appropriate enemies and surfaces. Pandora’s Tower doesn’t allow free camera control, opting for dynamic angles not unlike God of War. This can result in being unable to target something just off screen or latching onto the wrong enemy whenever they overlap in the player’s line of sight. Very rarely will your view result in an accidental death, but it’s an annoyance nevertheless. 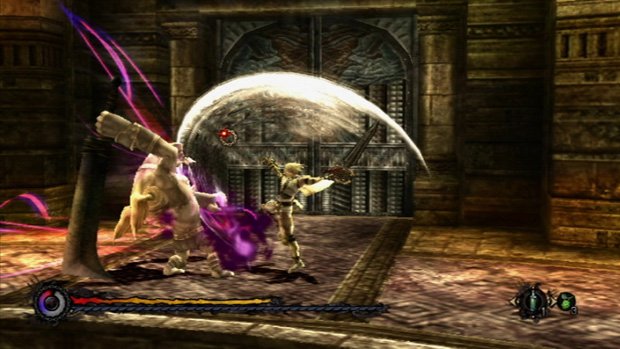 Combat is fairly simple — “A” swings your equipped weapon, “B” launches the chain, and “Z” triggers an evasive roll. The enemies are comparably vicious; getting slammed by two or three at once can easily drain around half your health. Such skirmishes must be approached with caution and demand liberal use of the Oraclos Chain to limit your opponents’ mobility. You can also employ single-use tools on the fly via a Monster Hunter-style item bar — navigated with the direction pad — rather than having to pause the game and break the flow of battle.

Like I said, this game can be brutal. Death comes swiftly, and checkpoints aren’t as numerous as in more recent action RPGs — if Castlevania: Lords of Darkness – Mirror of Fate is at one end of that spectrum, Pandora’s Tower sits somewhere in the opposite range. Now and then, you’ll encounter enemy variants shrouded in a purple mist, which indicates that all their stats have been raised significantly. These guys can appear randomly appear in a room in place of their standard incarnations, and I advise you to avoid confrontation should you spot more than one in a group.

The fights against the Masters are as exciting as they are clever. With the exception of a handful, only the Oraclos Chain is required to slay these great beasts, some which are quite docile until you start attacking — echoes of Shadow of the Colossus in more ways than one. Encounters play out like puzzles in which you must find a way to make the Master lower its defenses so you can target its glowing weak spot. Once you latch on, you have mere moments to charge your chain’s power meter and yank before the creature recovers. Some Masters are pushovers, others will make you work for your victory, but all are unique and require wholly different strategies. 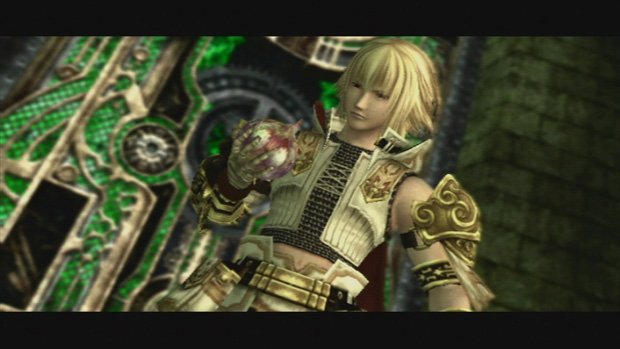 While you are traipsing about the towers, a meter in the bottom left tells you how much time Elena has before her transformation completes and your game ends. You will almost always be unable to clear a tower within the limit, so you frequently have to backtrack to the entrance and return to the Observatory where Elena awaits. The quality of the meat you serve her will determine how much time is added to the clock, but if you allow meat to sit in your inventory too long, it will spoil. Thankfully, the chances of flesh going rotten are low — it never happened to me once during my playthrough, and I always made sure to sell off excess meat.

Being mindful of Elena’s status adds a healthy measure of urgency to your travels. You have to weigh the risks of continuing your climb with the likelihood of getting back to the Observatory with time to spare. Maybe if you hold out for a few more rooms, you’ll discover a shortcut that will make the return visit quick and painless. Or if you have a certain item in your possession, you can teleport to the Observatory on a whim.

Your role as a high-risk caterer will likely wear at your nerves, but the tension it builds is necessary to keep you focused. Furthermore, Elena will be in a semi-transformed state should you cut too close to the wire. Finding the normally cheerful and sprightly lass half disfigured and in excruciating pain ought to be enough incentive to get that butt of yours in gear.

Keeping Elena in high spirits is just as important as preventing her metamorphosis. The Oraclos Chain also measures the couple’s affinity, which increases with constant interaction. Like any doting boyfriend, you’ll initiate conversations and gift her clothes and decorative accents. Strengthening your bond not only awards you with special items, it also affects which of the game’s multiple endings you’ll see. 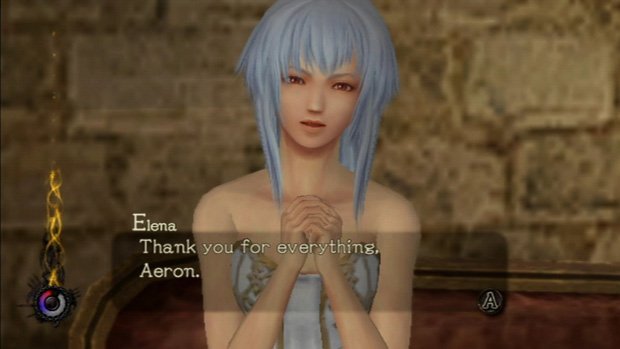 For a game with such straightforward direction as “kill monsters and save girl,” Pandora’s Tower is brimming with extensive amounts of lore. You will frequently pick up diary notes and journal entries that detail everything from the war-torn history of the fictional land of Imperia to the military’s past experiments in the Thirteen Towers. Quite honestly, it borders on excessive, but it’s all there for those players who desire additional context. I personally believe the plot would have benefited from less backstory, leaving ample room for interpretation.

I do appreciate how Elena was given dimension beyond that of your stock damsel-in-distress. Confined to the Observatory, she tries her best to make it as homey as possible. She’ll turn the fabric you gave her into bedsheets, translate ancient texts you discover, practice her singing, or tend to her garden. While abroad, Aeron may wonder what Elena is up to, triggering a short cutscene of her in deep thought or performing some odd task. Sometimes she’ll see you off when you depart, and other times she will greet you with enthusiasm upon your return.

A portrait of the dutiful homemaker would not typically be of special note, but the fact that Elena is strives for normalcy despite her curse is nothing if not tragic. Not knowing how much longer she can remain in control of her mind and body, she treasures the days she can spend with the man she loves. And when she does begin to transform and halfheartedly insists that she’s fine so as not to worry Aeron, a heaviness forms at the pit of your stomach. 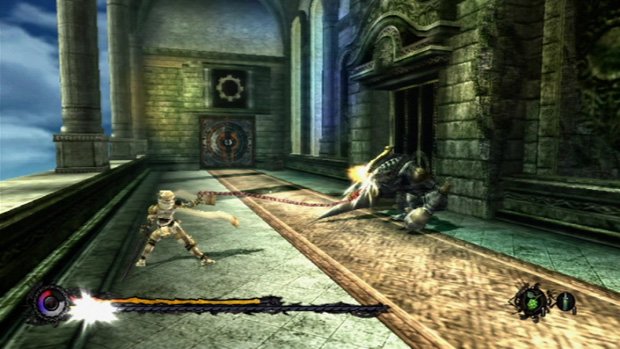 Compare her to Aeron, who couldn’t be more bland if he were a day-old plain bagel. It makes their relationship feel a hollow when Aeron exhibits no outstanding traits whatsoever. Coupled with some rather poor voice acting by both parties — also, no attempt was made to sync the dialog properly with lip movements — I’m surprised that the game was able to elicit any emotion at all. Such is the strength of Elena’s characterization.

Up close, Pandora’s Tower suffers from very ugly texture work. On the flip side, environments are a rich blend of hues, as though a herd of unicorns barfed rainbows everywhere. It’s good to see a developer that isn’t afraid to use the full palette, but Ganbarion could stand to exercise a bit of restraint. Yes, it’s okay to use all the colors, just not at the same time!

I’m likewise pleased by the variety of themed gimmicks in each tower — walls that can be scaled by embedding sharp rocks into their surface, gravity-defying columns of water with floating debris that can be ridden upon, etc. However, after the first five towers, the next set of five recycle the same elements and gimmicks. The game’s lore explains this duality by stating that every “male” tower has a corresponding “female” tower, but that sounds like an excuse to cheap out on new level designs and obstacles. 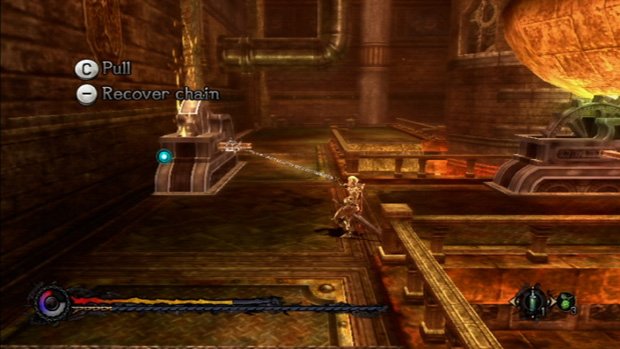 Pandora’s Tower is a very meaty adventure that spans at least 20 hours, and that’s not even considering post-game content. After beating the final boss, you unlock the ability to return to any major story juncture with all your current equipment and stats. You can then enter the secret crimson doors that were locked previously or shoot for a different ending by improving Aeron and Elena’s affinity.

I previously called this title a “middle,” but maybe that’s doing it a disservice. Curious gameplay issues abound, only some of which I touched upon, in addition to the visual and voice acting mishaps. Still, it’s bursting with so much content that you are bound to find a morsel that tickles your taste buds. There are even shades of that infamous NES-era challenge, though the difficulty thankfully stops shy of being completely overwhelming. It’s just a damn fine videogame.

Pandora’s Tower is a bittersweet end to the Wii’s life: a taste of the kind of software that could have carried the console during those slow months. As it stands, it won’t be anything more that an engaging action RPG with a clever hook. But I suppose I can live with that.