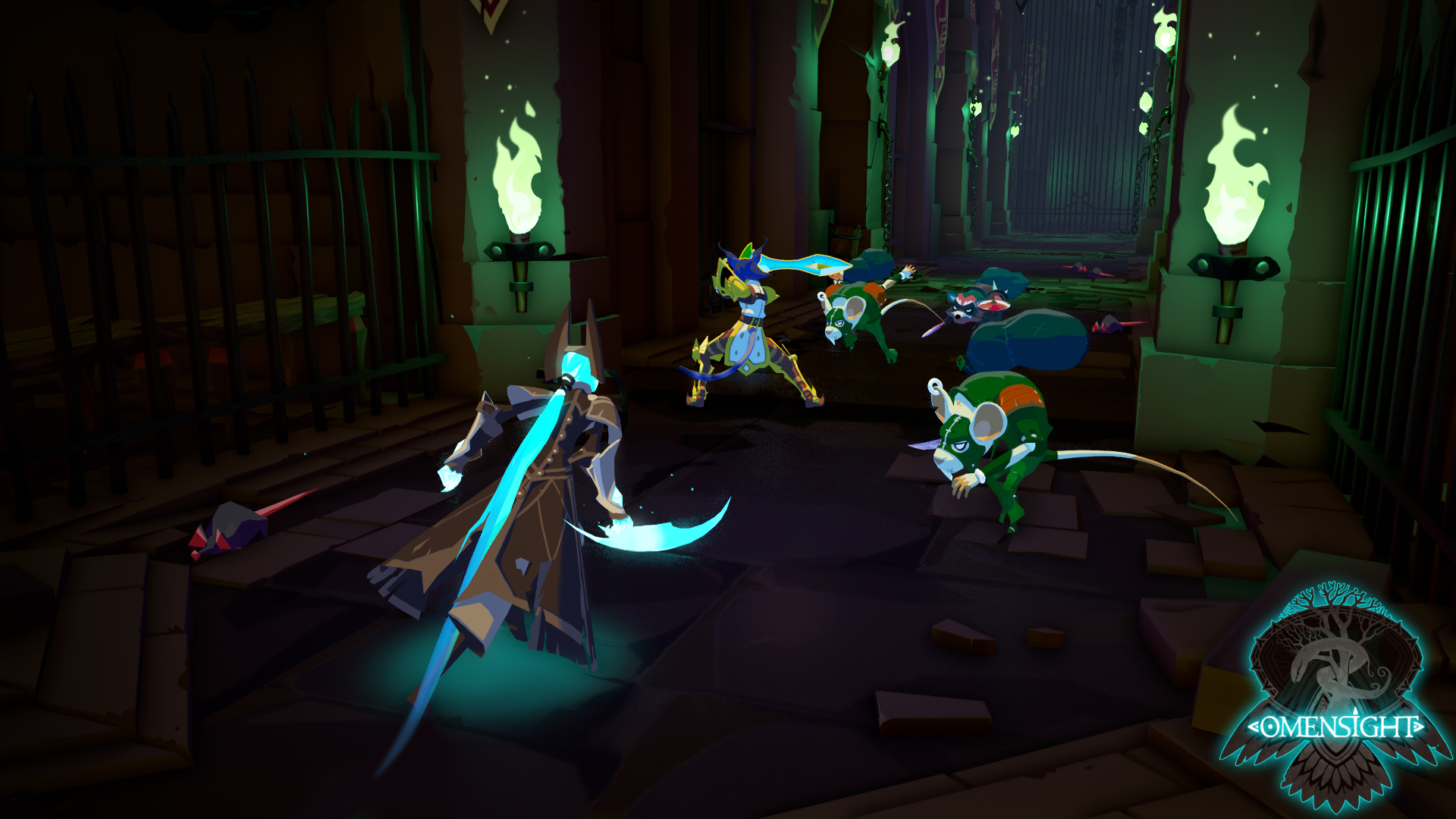 Rats off to ya

Omensight is a game about furry, humanoid, animal things that are all trying to murder each other for various political reasons. The whole spectacle of it is absolutely adorable right up until the moment that it chooses not to be.

The story revolves around several kingdoms, each made up of a specific species, who have found themselves locked into a huge power struggle. The problem is that there are bigger fish to fry. A giant, apocalypse-inducing demon named Voden is trying to destroy all life as we know it, and that’s where the player character comes in. You are The Harbinger, a silent, goofy-looking, glowing creature who has the power to travel back in time. Your journey is spent reliving the same twenty-four hours over and over with the hopes of figuring out how to stop this huge demon jerk from committing a widespread genocide of all sentient beings.

For the first couple of hours, I had trouble looking past the subpar voice acting. Everyone just seemed like cliché, cookie-cutter bullshit. Then something wonderful happened. With each new story reveal, the characters evolved, and by the end, they proved that their actions and personalities had a genuine amount of nuance to them. I found myself, despite my initial reservations, becoming rather invested in how events played out.

Once you’ve made it past the introduction sequences, you’ll find yourself in a hub world where you can choose to start the day alongside one of four characters. After you’ve gained a key piece of knowledge from one character’s perspective, however, you can show that to others, which will dramatically impact how things play out. Zig-zagging your way across timelines, you’ll eventually piece together the mystery of what actually happened.

Slowly but surely, you’ll fight your way to the truth. Sometimes, this involves doing the “wrong” thing, with the hopes of gaining some new scrap of knowledge, in order to progress the story. Sometimes, this makes you feel like a total asshole. It’s for the greater good though, right?

The combat is your basic hack ‘n slash affair, but there are a few different elements that keep things fresh. If you dodge an enemy attack at just the right moment, it’ll slow down time, but you also have a separate ability that can slow down time even longer, a dash, a grab/throw mechanic, and a few other offensive capabilities. These are all limited by a cooldown timer, so you can’t just spam them. The ways that you mix and match these skills is where the real fun lies. It’s a simple system, but it works.

Unfortunately, the combat suffers from a decent amount of float, and it can be difficult to tell which enemy you’re targeting at any given time. These same issues affect platforming segments as well, and all of this is exacerbated by the absolutely ancient implementation of a fixed camera perspective.

Just in case I’m not making myself clear, this is definitely a budget title, and it has more than its fair share of rough edges. The actual gameplay maintains a mostly acceptable framerate, but the loading screens dip into straight-up shameful territory. Besides being a frequent nuisance, the animations will freeze, and I was forced to restart the game several times as a result. The weirdest part was that it never happened while I was playing. It was always when I was helplessly staring at a stubborn loading bar. Hopefully, this sort of stuff will be addressed in the planned day-one update, but for now, it’s pretty disappointing.

Outside of the interesting narrative structure, there’s not a whole lot here that you haven’t seen before. Everything, from artwork to combat, is presented in a way that’s just barely competent enough to keep things interesting. You can see how all of the elements have been shoddily pasted together, but when all is said and done, it’s still somehow a great fucking game.

Omensight is a fun fantasy romp starring fuzzy animal things. It’s endearing in a way that, considering its flaws, it has no right to be. With a little more polish, this could have been a great game. As things stand now, it’s still a pretty damn good one. The story kept me invested, and I found myself smiling more often than not. If you can see past the rough spots, you’re in for a treat.