The last time we checked in with the long-awaited Oddworld: Soulstorm, things were looking good.

Let’s see how it turned out.

So Soulstorm is a weird game for multiple reasons. The main character Abe, is…odd. He’s not your typical hero, aesthetically and at the core of his being. He’s an unlikely prophet, a bumbling idiot…ah well you get the picture. Poor guy, I’ll ease off.

Since the very start, Oddworld Inhabitants managed to harness this strange magic into a digestible puzzle platformer with a heavy focus on avoiding combat, if you wish. It’s a goal that’s not only virtuous, but is still incredibly unique all these years later. And Soulstorm (named after the brew that’s made from parts of a Mudokon, the race of Abe and his people) mostly executes on that vision with a few old school issues along the way.

Billed as a revival of Exoddus (the second game in the series), Soulstorm feels more immediately lived-in. Whereas Exoddus felt more like an expansion pack, this is an entirely new game with a different framework and a grander scale. The new lens in which to view the story is lovely, as it allows us to become closer to Abe and his friends in a more meaningful and deliberate way.

Likewise, the levels (of which there are 15, with two secret stages) are more sprawling and open. As soon as you’re out of the weeds of the first few there are often multiple paths, with heaps of secret areas to discover and optional objectives (like finding and saving more Mudokon friends, which grant you access to the true ending). The inventory system all feeds into this gameplay loop, rewarding explorers with more tools to tackle some of the multi-pronged puzzles.

In other words, the more effort you put into discovering what the game has to offer, the more you’ll succeed. One of the best parts of Soulstorm though has got to be the enhanced movement system. Quick double-jumping fixes so many prior series issues, and allows you to more easily traverse some of the trickier sequences while latching onto ledges more often. The possession system (one of the primarily puzzle-solving tools, in which you take over an unsuspecting enemy) is still so fun and imaginative, and opens up so much design space.

Bits like controlling a flying foe to go through an obstacle course so that you can open a door for Abe are genius, because they fit within the established rules of the universe without feeling too gamey. You often have the option to sneaky by, brute force puzzles, or solve them through item use as well. The transparent menu option to see all of the Mudokons you’ve saved (as well as all pertinent stats) is also a godsend, ending the esoteric and occasionally gatekeeping nature of the collectathon element. 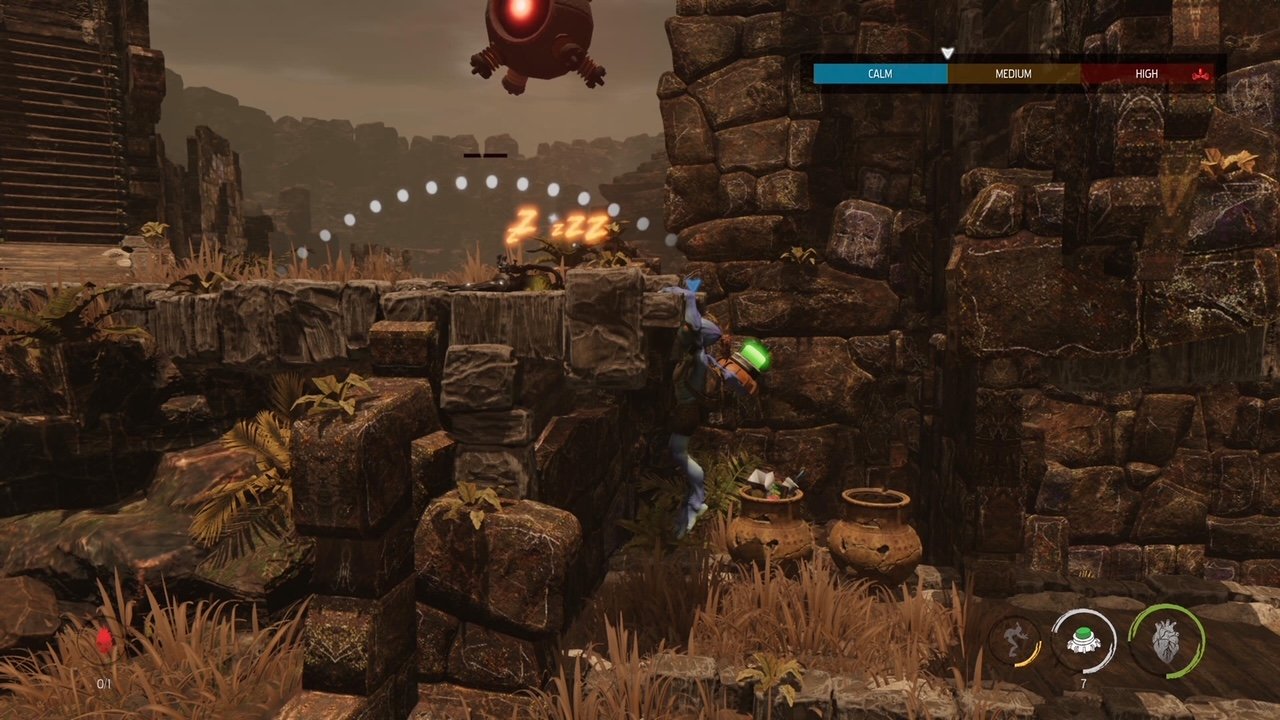 But with these classic principles at the forefront, there is some clunk. Checkpoints can be really murky at times, as they’re sometimes placed in such a way where you’ll have to grab a ton of items all over again if you die, lest you backtrack and trigger another checkpoint, then return to “resave” the current game state. Having some of these key items placed before safe areas and then checkpointing players would have reduced some of the busywork.

Navigating select menus is also an exercise in inelegance; most notably the main inventory, which is triggered by pressing the Triangle button and then manipulated with the analog sticks. It’s the same thing for the crafting screen (which allows players to create items that are typically found via gameplay like stun mines, but more conveniently on-demand), which is testy at times and requires a firm few mashes to get going. Then there’s jank like occasional jarring music and menu cuts. It’s annoying, but it can be handwaved depending on your tolerance level. There was a rare bug that soft-crashed the game, but that was patched since publication, and we did not experience it in the original build.

There are some cobwebs to shake out of Oddworld: Soulstorm, and some that will remain even after a hot shower, but you’d be hard-pressed to name very many games that are doing what this series is doing in 2021. I’m glad that Oddworld Inhabitants is still around, doing their weird and interesting thing.