I recently attended a tribute night at a local brewery, where musicians were invited to serenade patrons with songs from the ’70s. Early on that evening, I glanced around the darkened beer hall to discover I was a few decades younger than most of my peers, many of whom were excitedly singing along and dancing to a tune I’d never heard before. That happened several times over the course of the show, as I frequently found myself at odds with the crowd, at a loss for what most of these anthems were, outside of a few recognizable ballads like “Hotel California.” Not being my generation’s music, I didn’t have the same relationship with the refrains as the rest of the audience. But that didn’t stop me from enjoying myself. Immune to the tsunami of nostalgia washing over the room, I instead focused on the performance. As one group after another ebbed and flowed off the stage, I fixated on the individuals behind the instruments and the sounds they created, rather than using them as a vehicle to travel back in time to a decade I never knew.

Nitroplus Blasterz elicited a similar response from me. As a fighting game crossover that pulls together dozens of characters from obscure visual novels, manga, anime, and light novels, I went into the experience with little frame of reference for who the cast members were, despite that ostensibly being one of the key selling points. Even as a fan of Japanese pop culture, I can count on one hand familiar faces amidst the dozen-plus main fighters and twenty assist characters here. Unlike, say, Persona 4 Arena Ultimax or Dengeki Bunko: Fighting Climax, the roster in Nitroplus Blasterz wasn’t a big draw for me. If it was going to win me over, it would need to do so solely on its own merits — not on the backs of other things I was already predisposed to enjoying.

And it did just that. Nitroplus Blasterz is a first-rate fighting game, even if you don’t know Super Sonico from Adam. 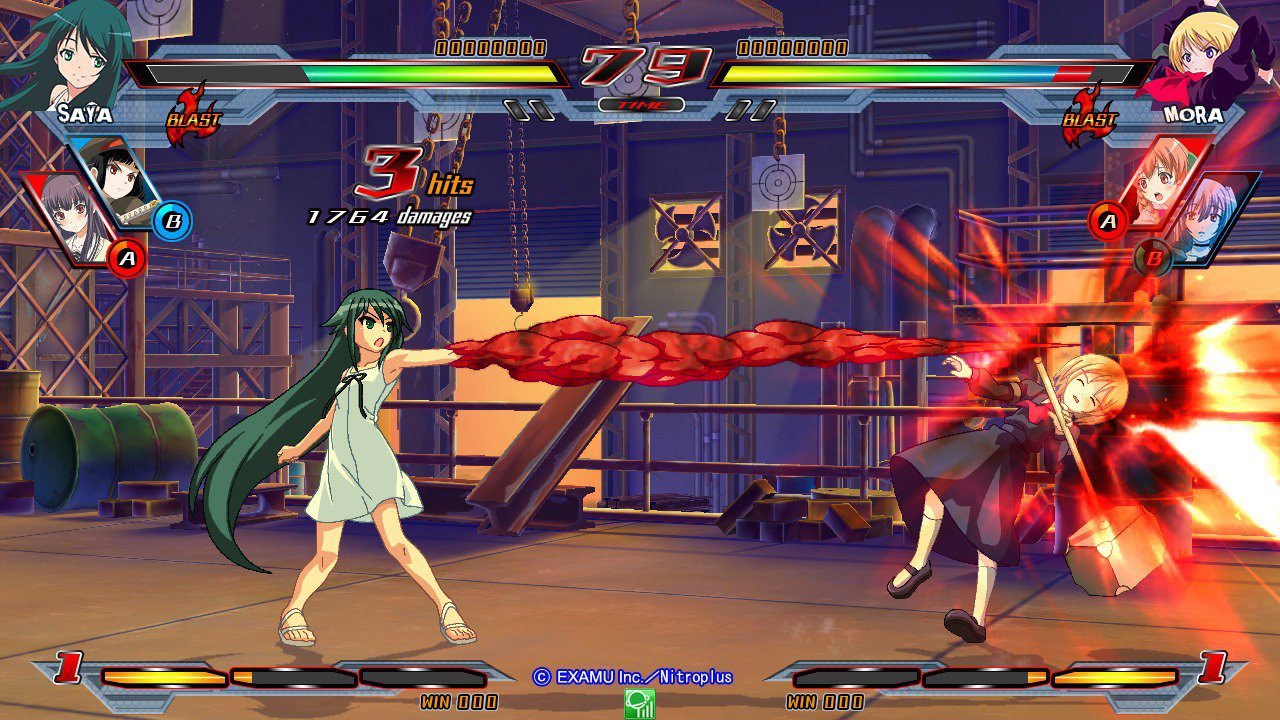 Following in the footsteps of the aforementioned Persona 4 Arena and Dengeki Bunko: Fighting Climax, Nitroplus Blasterz markets itself as a game that is easy to pick up, but difficult to master. Targeting both fighting game enthusiasts and Nitroplus fans that might have never thrown a dragon punch, it attempts to walk a line between something players from both camps can get behind.

I’d argue that line is drawn a little closer to the hardcore side of things. While the inputs for special attacks and super moves are relatively easy to execute in contrast with some one-on-one fighters, if you’re the sort of person who struggles to pull off quarter circle motions, you’re probably in for a bad time. That said, there are certain concessions for more casual players, like the “Variable Rush,” a special lunge attack that launches characters into a short-lived combo. If the Variable Rush connects, players can essentially button mash to execute a customizable string of impressive-looking attacks that change depending on which face buttons are pressed. It’s not necessarily the most effective use of meter (costing two of three power bars), but it’s easy to execute and reasonably effective.

Beyond the standard light, medium, and heavy attacks are launching “Heavy Action” moves and “Escape Actions,” which, depending on directional inputs, can be used to perform everything from short hops, cancels, rolls, air dashes, and defensive maneuvers. One of the more interesting (and useful) Escape Actions is the “Vanishing Guard,” which negates chip damage when blocking and, if pressed at the right moment, acts as a parry, giving the user a momentary advantage over the enemy to strike back or get away. Vanishing Guard has its limitations, though, as it can only block either high or low, leaving one angle open for enemies to exploit.

Of course, each character has plenty of unique special and super moves, as well as a single “Lethal Blaze” attack, which, for the price of full meter, triggers a fighter-specific mini-cutscene that unleashes an assault powerful enough to turn the tide of a one-sided match or swiftly end a nail-biter. Lethal Blaze also can be wielded as a trump card by taking priority over other attacks.

There are a couple other minor systems at play, but I want to talk about the characters. The main roster contains twelve main combatants, including the sword-wielding Saber (Fate/Zero), ranged fighters Saya and Anna, cat-throwing Nitroplus mascot Super Sonico, zone-controlling Ein, Spider-Man-esque Muramasa, grappling Ethica, and Ouka, a heavy-hitting robotic walking crucifix. While there isn’t a male character in the bunch, the cast is very diverse in terms of mechanics, so players shouldn’t have trouble finding at least one or two characters that suits their tastes and personal play-style.

But the fun only begins with the core cast. In addition to main characters, players will also take into battle two (of twenty) additional partners that can significantly impact how a match unfolds. Each partner comes has a unique move — and I mean unique. One rides a hang-glider in from off-screen, aiming to crash into your opponent, while others can summon overwhelming swarms of minions, like zombies or bugs. Another sends in a barrage of missiles from the sky, and a few don’t attack at all, instead doing things like giving both sides a bar of meter or placing buffs in the middle of a stage, impelling players to play tug-o’-war over the bonuses. 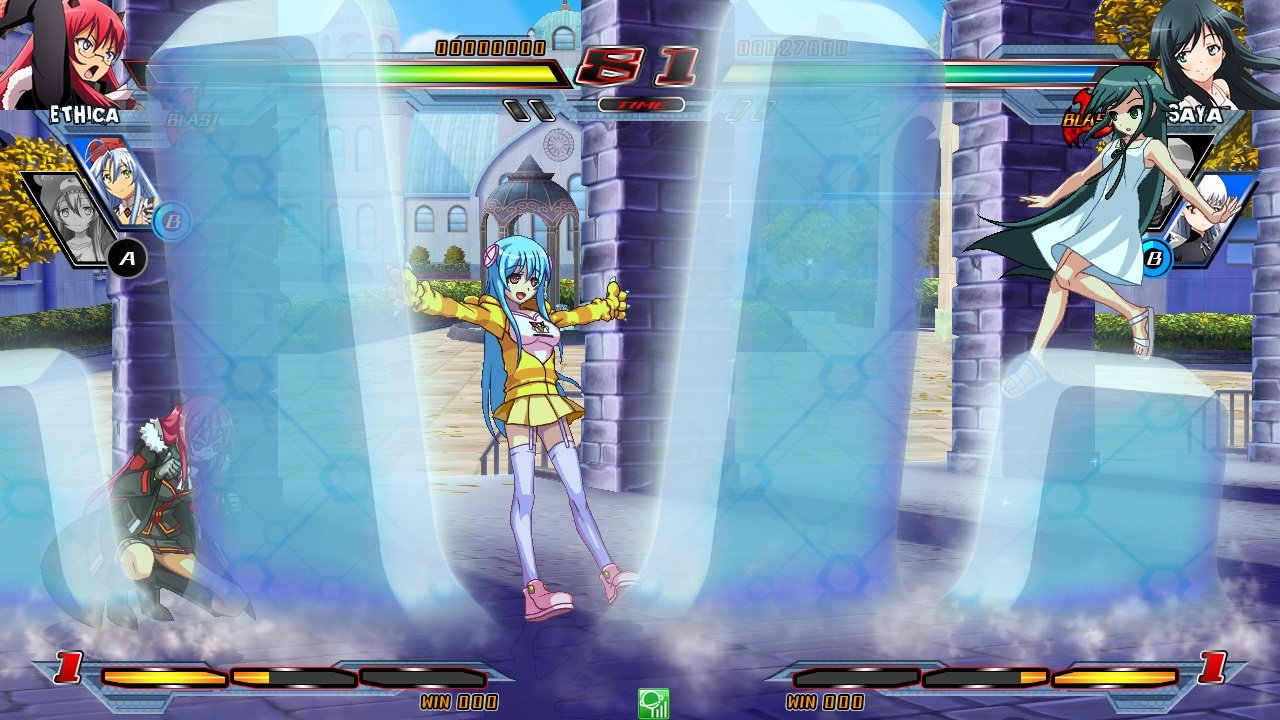 The partner blitz attacks recall the arcana system from developer Examu’s Arcana Heart series, which allows players to accent their character with different abilities and gives the game an added level of strategy. In my time online with the online mode (which, by the way, is fine — if a tad spartan), I noticed a pattern of opponents picking partners to counter one another, as the impacts their assist attacks provide can mean the difference between victory and defeat. I can imagine high-level competitors spending a lot of time working out which partners are best in particular spots and situations, offering an incredible amount of depth for those who seek it.

In addition to that added level of complexity, Examu also left its mark on Nitroplus Blasterz by allowing Aino, one of the characters from its Arcana Heart series, to join the roster as a DLC character along with Senran Kagura‘s Homura. While I haven’t spent as much time with them as the rest of the cast (they were not available pre-release), I’ve enjoyed the few matches I’ve been able to use them in and could easily see one becoming one of my mains, along with Anna and Saber. Since both Aino and Homura are free for the first week following the game’s launch, that provides a little added incentive for interested parties to pick the game up early.

While I’m certain some players will balk at the dearth of bonus features or collectibles, that sort of stuff (along with the visual novel-style “Another Story” mode) doesn’t really interest me. I’m more than content with your standard arcade, score attack, network, and versus modes if the gameplay is solid — and it is. That’s where I derive my enjoyment from. And I appreciate added perks like cross-platform and cross-region play, so I can compete against players on PlayStation 3 and people from other countries. 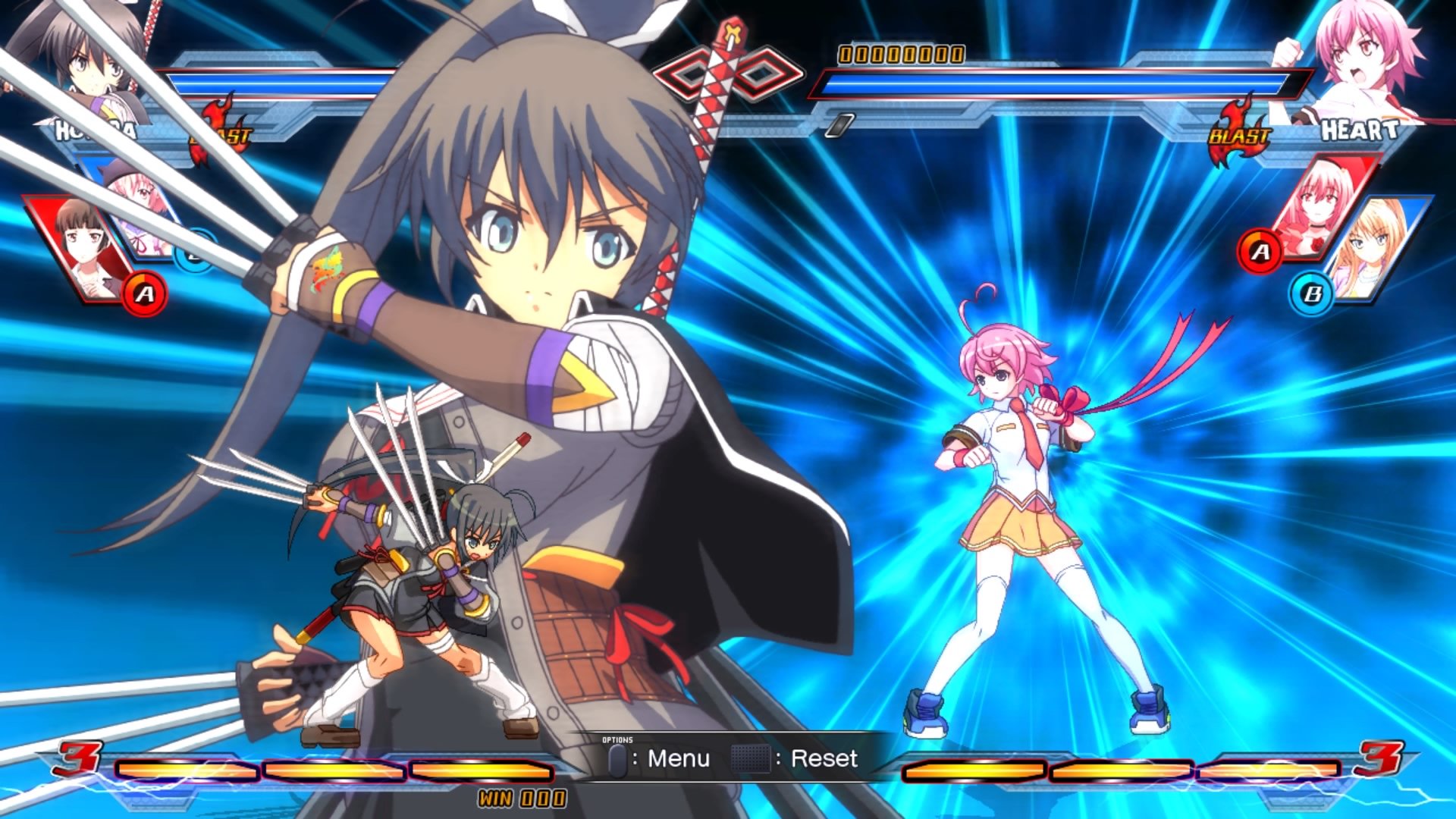 Even though I still have no idea who most of these characters are, that didn’t end up mattering to me in the end. Nitroplus Blasterz is a fast, smooth, strategic, and generally entertaining fighting game that has found a happy medium between accessibility and depth. Provided a decent-sized community builds around the game, this is a fighter I could see myself enjoying for a long time to come.