It would be facile to say NHL 12 just skated by, sticking to the winning formula established in franchise’s resurgence. Still, as is occasionally the case with sports games that don’t need radical fixing, last year’s iteration was one of tweaks and balancing: welcomed AI fixes, improvements made to the previously implemented physics system, and so on.

NHL 13, on the other hand, feels like a more substantial improvement over its predecessor, due in large part to the physics system extending into the actual skating, further grounding the game in strong hockey simulation that, simultaneously, is accessible enough to pick up and play. And, given the consistently great scores this series has received over the years, I think you know where this review is going: NHL 13 is pretty great. 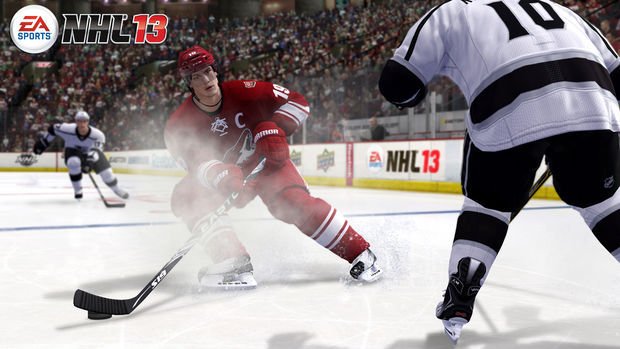 Players no longer feel like gliding ghosts out on the ice. Ice chips spray up on sharp cuts and momentum is preserved. An object in motion tends to stay in motion, after all. When you take a sharp break up (or down) ice, you can feel each stride length digging into the ice. I actually played a game of Madden 13 right after some NHL 13 and felt I had less a solid foot beneath me in Madden, weirdly enough. You’re more grounded on ice.

The extended physics, True Performance Skating, and EA Sports Hockey IQ all work in concert to produce the most nuanced hockey title to date. With the Hockey IQ, the new governing AI, players are aware of every other player on the ice, rather than just those in their immediate vicinity. Goalies are aware of more than just the player controlling the puck at any given moment, while new animations afford them independently controlled limbs that can make for exciting desperation saves and less mechanized, exploitable goal keeping. What all this means, in short, is that play feels true to life, more akin to the fluid, organic art that is professional sportsmanship than a mechanized recreation. Save for some occasionally wonky collision detection on hits, the game is, in some way, indistinguishable from the real-life product you’d watch on television.

This faithful representation does something most sports games don’t: it starts teaching you about the nuances of hockey and does so implicitly. It challenges you, but doesn’t necessarily assume you know what the heck is going on in the sport (and I know plenty of ardent sports fans who actually know very little about the sports they root for so strongly). It does well what great games do, but what sports games often eschew or ignore, basically. It teaches you how to get better through play — and you often don’t even realize it until after the fact. 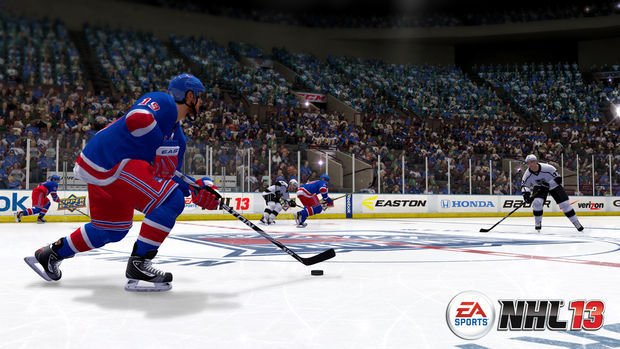 If you opt to take the brief, explicit intro tutorial, the first thing you do is shoot and the second thing you do is shoot aimed shots. The third thing it teaches you is how to engage in and win a fist fight. Hockey, folks. If you’re curious, triangle (or Y) still engages and it’s still in first person, though it appears to have slowed down and become a bit more measured since NHL 12. Left and right on the left stick to dodge punches, L2 to use your free hand to block, down to tug on opposing player’s jersey – a quick right stick delivers an uppercut. The punching parallels shooting. Flick the stick up (straight, or towards left or right, depending on where the opposing player’s head is) for a jab; pull the stick down and up for a full-fledged punch.

I know I’m in the minority in thinking the fighting in hockey is stupid. “Part of the culture” and all that nonsense. Fighting in the series is rather hilarious, though, emphasizing the inanity of it, like playing a less self-aware NFL Blitz. Of course, it also has the practical use of giving you an energy boost if you win. To its credit, the game also does a good job of subtly nudging you in the direction of proper play without successive tutorials, which is great because there’s way too much content to relegate to tutorials.

The game is as robust as ever, filled with enough different modes to keep you content for far longer than the year’s wait until the next release, though modes like NHL Moments are only good for short bursts. New kid on the block is the huge GM Connected, which can accommodate up to 750 individual players in a single league if you have the bureaucratic wherewithal to organize such a logistical nightmare. Having human-run teams, despite the difficulty in organization, is better than dealing with the offline, improved-but-still-flawed managing AI, from whom you can still bait bad moves (or just let it make the bad moves on its own and capitalize).

I still prefer couch co-op, which NHL 13 continues to do with aplomb. Still, the ambition of GM Connected is duly noted and the heavily invested fanbase will undoubtedly enjoy the opportunity to play, manage, or coach en masse. Hopefully the its next iteration will be a bit more streamlined and optimized, however, as the menu navigation is both a bit labyrinthine and irritatingly slow — be prepared for a lot of waiting during navigation. 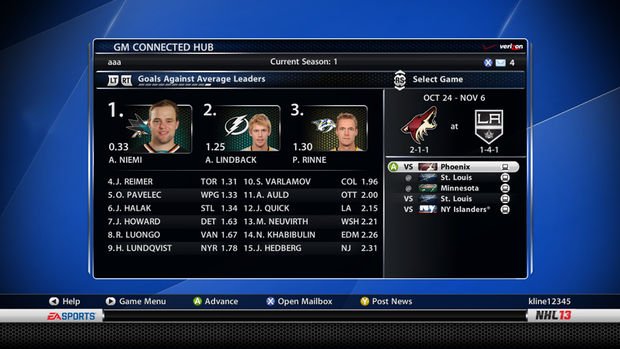 As the third period of a one-to-one stalemate began, after winning a faceoff I made a mad dash for the opposite net. At the last moment, as I skated towards the goalie from the left at breakneck speed, I gingerly slid a pass across the ice to the AI teammate trailing behind me on the other side. I automatically assumed control and flicked the puck into the upper right corner of the net — just beyond the goalie’s outstretched arms — that bounced off the steel and in for a goal. Inadvertently, in real life, I fiercely pumped my fist and growled an emphatic “Yes!” Growled, not yelled, because it was well past midnight and I was still playing.

NHL 13, at its most basic level, is just fun to play when you get right down to it, even for someone who might only watch hockey during the playoffs and Olympics, or not at all. With another work stoppage induced in the oft-locked out league, NHL 13 is also one of the few outlets for hockey fans this would-be season, save for getting out on the ice yourself and getting your teeth knocked out. You could do much worse for a substitute.