Into the mind of madness

Mental illness is terrifying. Depression is a soul vampire that will suck the light right out of you. Obsessive compulsive disorder does not make you a supernaturally great detective like it does in the movies. It makes you paranoid and agitated, a raw nerve constantly scraping against a coarse world. The insidious, pervasive terror of mental illness can be far more horrifying than any chainsaw-wielding maniac could ever hope to be.

Which is exactly why Neverending Nightmares works. 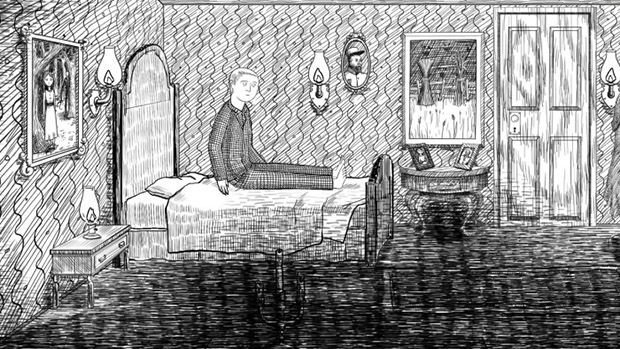 Neverending Nightmares is a psychological horror game all about mental illness. A direct result of lead creator Matt Gilgenbach’s personal struggles with depression, OCD, and intrusive thoughts. While he has dealt with bouts of instability throughout his life, it was the failure of his last game, the critically well-received but commercially ignored Retro-Grade, that sent him into a tailspin of depression that eventually became the inspiration for Neverending. Gilgenbach took all of the darkness swimming around in his head and poured it into a game he could use to express the confusing, disturbing, and emotionally draining experience of coping with it.

The game puts you in the role of Thomas, a deeply troubled man who has just woken up from a horrific nightmare about killing his sister. You set about exploring his mysterious and spooky home to try and find her, only to constantly reawaken into a downward spiral of even more disturbing nightmares.

It’s intentionally vague on story and context, and all the better for it, letting the play mechanics shoulder the narratives’ heavy lifting. It’s a refreshing use of the medium’s ability to convey a message without literally spelling it out.

Thomas’s strange home loops and winds around itself in impossible ways. A seemingly endless supply of doors and nearly identical hallways dissolve any sense of place and direction. Even when moving in a consistently straight line it’s easy to let doubt creep in and start to feel lost. As the game is entirely centered around exploring the ever worsening locations Thomas finds himself in, that nagging, unsure feeling hangs over the entire experience. 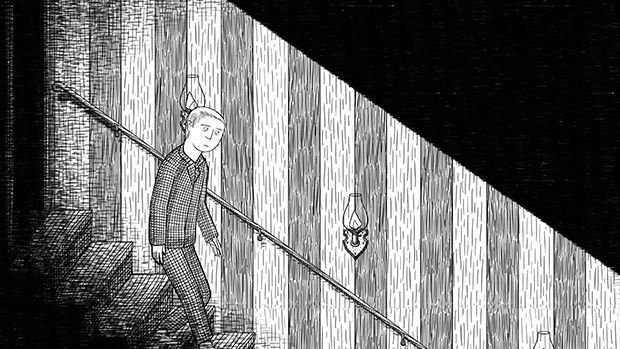 Thomas is not an action hero. He shuffles through the hallways of his psyche with a hesitant step. Pajama clad and utterly defenseless, any encounter with one of the monsters (all various manifestations of his uncertain trauma) that wander the halls will result in his immediate disembowelment, or face devouring, or rib splitting, or whatever other horrific end is inflicted on him.

But even death isn’t a release from his suffering. Thomas will simply wake up in the nearest bedroom, always just a short distance away. His utter lack of combat prowess means running and hiding are your only options. You can sprint, but only for short distances. Jog too long and Thomas will double over in agonized, wheezing pain from an asthma attack.

Thomas’s asthma doesn’t just make it more difficult to run from monsters, it’s a constant frustration, and I mean that in the best sense of the word. You can’t rush in Neverending Nightmares, even when backtracking over previously cleared ground — you’ll be forced to travel at a cautious pace. There is one sequence in the game that has you chasing after an apparently friendly apparition, only to be left lagging helplessly behind due to his illness. It’s incredibly agitating, and that is the entire point. As someone who dealt with asthma as a child, I have to admit that sequence got to me. It reminded me of the terrible sensation of feeling betrayed and hindered by my own lungs. 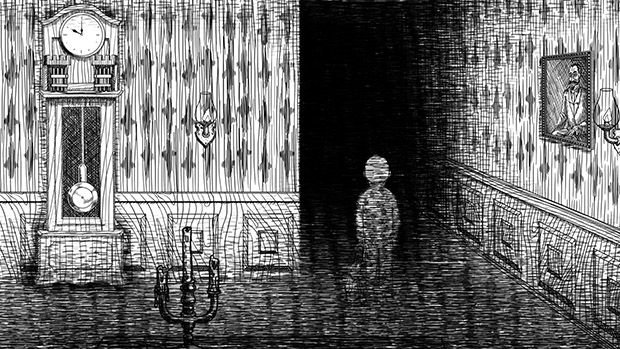 The fantastic gothic art style inspired by Edward Gorey’s illustrations sets an incredibly oppressive mood. The sketchy black and white style fashions the characters with a cartoonish look, while the backgrounds and world objects are filled in with a fanatical attention to detail. The closer you look, the more hostile the world becomes — family portraits are laced with the implication of violence, there are skulls subtlety embedded in the wallpaper. It’s mesmerizing and terrifying at the time.

The bleak monochrome color scheme is broken up by the occasional splash of color. Sometimes this is helpful, like highlighting intractable objects with colored trim. More often, it’s disturbing. Bright red spurts of blood sprayed across a child’s bedroom, raw meat left to rot on the kitchen counter, a blue vein torn out of flesh.

Neverending is careful about doling out its horror. It doesn’t revel in bloodletting like a slasher-film, at least not at first. The violent imagery is measured out in slow and deliberate helpings, which only makes it more jarring and horrible when things turn nasty. 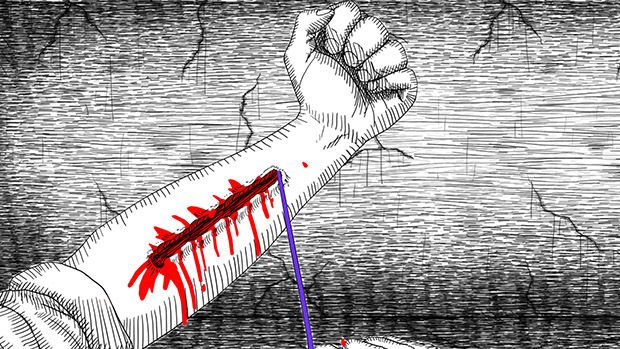 The brilliant sound design works hand-in-hand with the visuals to foster paranoia, whispering from the darkness. An ominous ambient soundtrack mixes with sound effects designed to put you on edge — distant footfalls, the wayward chime of a music box, a glass shattering somewhere down the hall. There is a special audio mode for playing with headphones and you’ll definitely want to take advantage of it to get the full experience.

Neverending Nightmares is a slow burn, a creeping dread. This isn’t a game about zombie dogs suddenly crashing through windows, it’s about unending, inescapable tension. Being caught in a perpetual flinch, waiting for a blow that you are so sure is coming it might almost be a relief to take the sting and get it over with. When the rare jump-scares finally occur, they feel completely earned.

That is the thing about the experience, it all feels earned. The tactics it uses aren’t entirely unique or novel. This isn’t the first horror game to use dis-empowerment to ramp up the tension, or to rely on great visuals and sound design to set a mood. But, it’s all done with such fantastic execution it feels like the result of a specific vision, not just a mish-mash of popular horror game gimmicks.

By the time I was done with Neverending Nightmares, not only did I have a great scary time, I felt like I understood a little bit of what Gilgenbach and others struggling with the illness feel on a daily basis. Make no mistake, it’s still a horror game first and foremost, but that extra little bit of dark knowledge is unsettling. The terror feels more real, more concrete, than any other horror game I’ve played in recent memory. 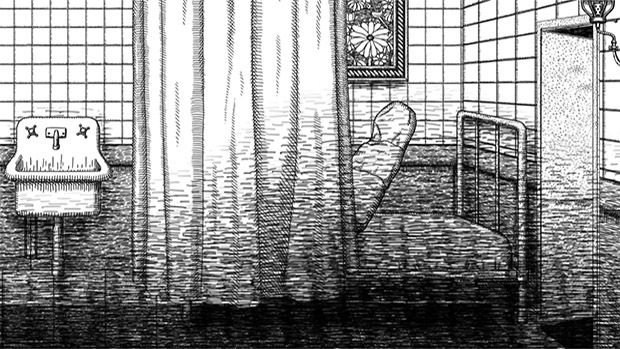 For everything I love about the style and atmosphere, I can’t help but feel the actual content was unfortunately thin.

While wandering around the exquisitely distressing locales is rewarding in its own right, the game is starved for things to do in them. There are a few small puzzle elements, but they are so brief and understated I hesitate to call them puzzles. The odd intractable objects you can examine for finer detail are creepy and intriguing. The artwork for these moments is always fantastic, but there are just so few of them, and even fewer that ever payoff in a meaningful way.

The length is also concerning. It took me around two hours of playtime to unlock all three endings. I can respect a game that is able to offer a tight, concise experience that does what it sets out to do and is done before it overstays its welcome, but sadly, this is not that game.

While the total length is short, some of the areas drag on well beyond their prime. The Asylum level in particular, despite featuring some of the most disconcerting visuals of the game, brings things to a grinding halt. It’s filled with endlessly repetitious cellblocks and enemies that force you to slow the game’s already languid pace to a crawl. It’s also one of the key branching levels if you want to see all the endings, so you’ll have to slog through it multiple times. By the end of that, you might be fit for institutionalization yourself.

The three possible endings all offer some perspective on Thomas’s psyche, but feel rushed and undercooked. One of them was so short and abrupt I thought I accidentally skipped it somehow. Short endings aren’t the end of the world, it’s the journey not the destination that matters, but they still left me cold. A happy ending that wrapped everything up in a neat little bow would have been a disservice to the rest of the game’s commentary, and I wasn’t looking for one. But, some kind of closure at least would have been welcome. 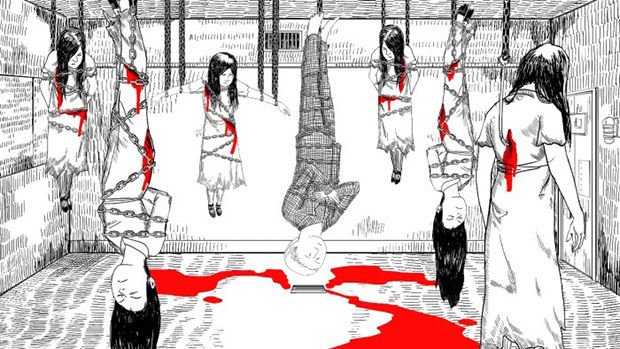 I admire the sheer artistic bravery of Matt Gilgenbach. It isn’t often that a game developer will tear his heart out and lay it down for everyone to see. Despite its flaws, Neverending Nightmares offers a striking and unforgettable horror experience, combined with an uncomfortably intimate look into the true torment of mental illness. However, its lack of content and uneven pacing prevent it from being the classic it feels like it could have been.