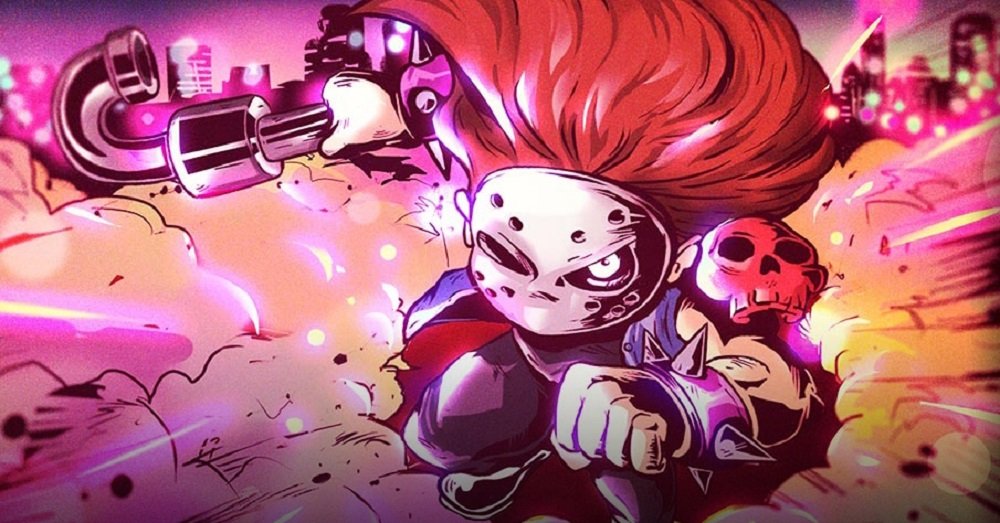 The year is 2075, and all is not well beneath the ultraviolet lights of Neon City. Following the Android Revolution, which resulted in a civil war and the destruction of thousands of automatons, the bustling cyber metropolis and its surrounding areas have fallen deep into disarray.

Capitalising on the grim aftermath of this conflict, brutal gangs have carved up what remains of the ‘berg for themselves, with each gang leader taking a chunk of the wretched refuse of Neon City and making it their own turf. With humans and mutants fearing for their lives, and what remains of the android populace living miserably in the shadows, Neon City has become a buzzing hive of criminal activity. And it seems that nobody dares – or is able – to put an end to it.

Crashing into this future-noir tale comes our boy Rick, a young vigilante who has decided he’s mad as hell, and he’s not gonna take it anymore. Sliding into a denim war vest like I rocked in ’89 and a hockey mask like that other Rick, our hero rips a length of rusty piping from the wall and sets out to liberate the meanest of streets. 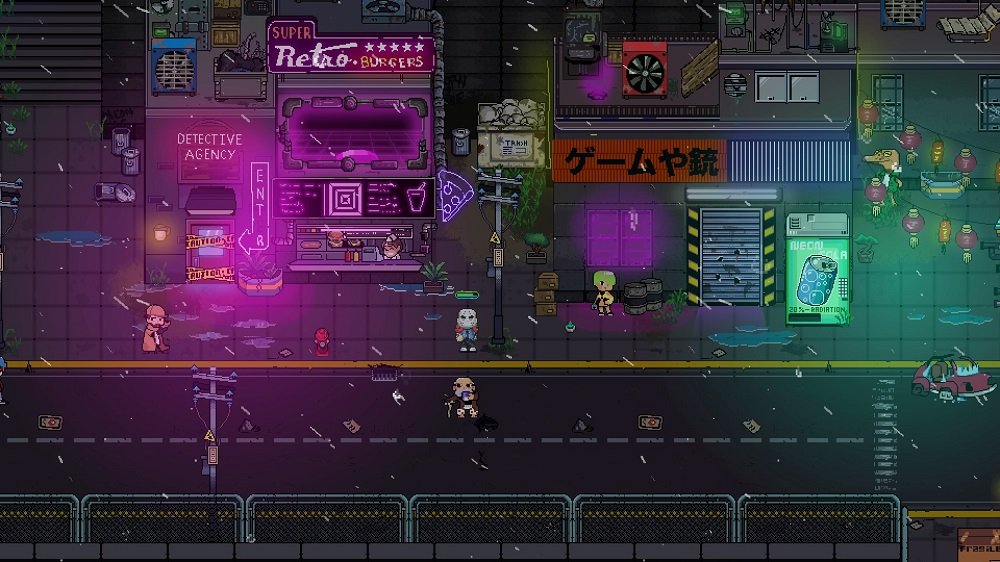 Neon City Riders is, essentially, a little bit of everything. It has a top-down viewpoint reminiscent of Zelda: A Link to the Past (complete with a grass-cutting mechanic), it has the intricate pixel detailing of titles like Retro City Rampage, the fast, unforgiving combat of Hotline: Miami, the “skills-equals-progress” of a metroidvania, and the overall vibe of ’90s Amiga adventures. But despite wearing these and other masks, NCR struggles to find an identity of its own.

Players guide Rick through Neon City and its surroundings, including a junkyard, a spooky forest, the sewers, and a frosty, snow-covered clifftop. The map is open from the get-go, emphasising NCR‘s key element: exploration. Players can pick their way through these locations in any order they choose but will eventually run into roadblocks, to be removed via specific items, or by learning unique skills.

This dedication to free exploration is a direct reflection of many ’90s games’ casually-paced approach to problem-solving, where you would be sent meandering in one direction, only to find you’d have been best off choosing another. This in itself isn’t a problem (particularly for those who dig map-crawling), but the issue lies with NCR‘s lack of interesting things to do while en route.

Neon City is packed full of varied locations, ranging from stylish, to sleazy, to lively, to dour, and all of them are beautifully realised. But, for the most part, they feel strangely empty, which often results in long periods of simply dawdling back and forth through large, spacious areas, whilst looking out for any trigger to activate further progression. After just a few hours of exploration these great-looking locations start to feel drained of their initial colour.

As Rick picks his way through enemy turf, he will be attacked by numerous thugs, unique to each gang. Combat is essentially pattern recognition, with almost all fights – including boss battles – boiling down to “dodge then attack.” The warning frames are slim, and the punch-ups unforgiving, in keeping with NCR‘s love of old-school difficulty. This works out fine for those with fast reflexes (or hefty shmup experience), but others might find the enemy fights (which respawn with each screen revisit) a little frustrating.

Rick only has access to a couple of helpful maneuvers, acquired by defeating each of Neon City’s gang bosses and their lieutenants. NCR willfully chucks the player in the deep end, offering a tutorial that quickly establishes the incoming difficulty curve before further stripping Rick of his most useful abilities, leaving the player with little more than their quick wits. Then again, perhaps that’s exactly what you, as a player, want from your adventure. If you’re looking for trouble, you’ve come to the right place.

When not cracking heads, Rick is frequently thrown into hazard-dodging setpieces – dashes over collapsing floors; mismatched conveyor belts; icy clifftops; spikes; pits; and falling rocks. NCR is quite happy to put you in situations where pixel-perfect control and expert timing are a necessity to progress. But while it never feels truly “unfair,” NCR does occasionally stack the odds in an obnoxious manner.

Take for example a (literal) rat race, which simultaneously involves one-hit-kill obstacles, a thin pathway, meter management, and then reverses your control inputs. Or perhaps a complex, high-speed dash through a corridor of spikes and Tesla coils, with the Big Punchline being it leads to a dead end. While NCR should be applauded for its dedication to difficulty, moments such as these come off as simply cheap, far removed from the game’s alternate smarter puzzles. 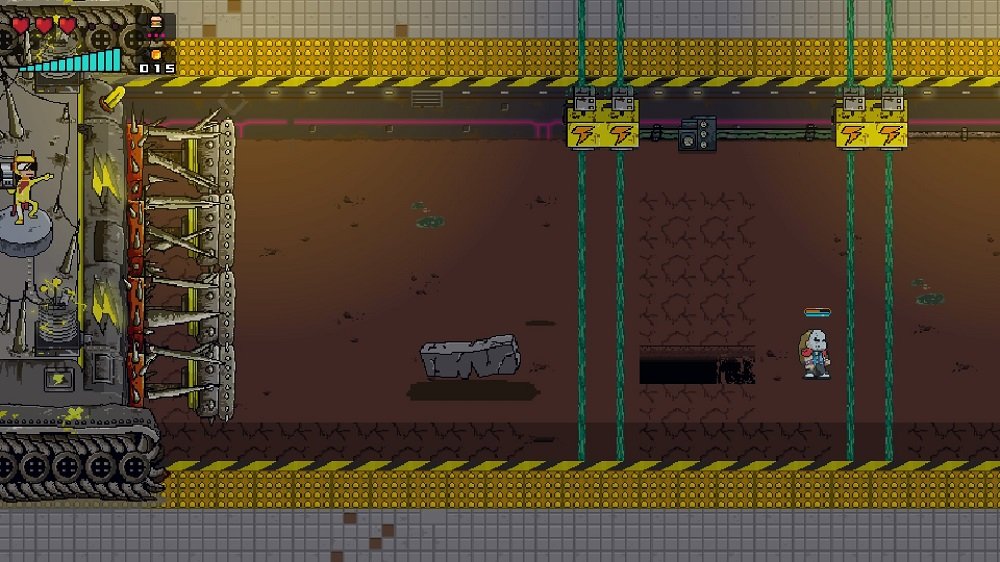 Neon City Riders shines in its presentation. The world is full of cool NPCs and enemies, their tiny stature on screen belying the awesome colour, detail, animation, and character bursting out of every one of them. The bosses and their lieutenants are uniformly great from a physical design standpoint, even if their backstories are all “I’m bad but SOCIETY.” Equally magnetic are NCR‘s many locales, filled with neat little animated touches and oodles of fun background details. Neon City gives off a great 2000 A.D. vibe, complete with lurid use of colour, light, and shadow.

Giving life to these visuals is NCR‘s beat-heavy score. Like everything else, the music is bristling with nostalgic style, reminiscent of the tunes pumped out by the Amiga and the humble C64 in their heyday. The tracks themselves are a mixed bag. The tunes range from the excellent – such as the John Carpenter-esque Neon City theme and a great, haunting track in the android junkyard – to the very repetitive sewer theme, which grates hard. For the most part, the soundtrack is awesome. Neon City Riders nails its vibe and aesthetic, and is, without a doubt, the game’s ace-in-the-hole.

Neon City Riders has four different endings to conclude its 12-to-15-hour journey. It also features a laundry list of side-quests that unlock running buddies, fun character skins, and other surprises. Given the overall difficulty of NCR‘s action setpieces, and the sometimes laborious exploration, many players will be one-and-done, while the less patient may find frustration or fatigue will see them tap out early. It should be noted that I had a recurring issue with the PS4 edition that caused the game to randomly crash on the map screen, so hopefully this will be fixed in an update. 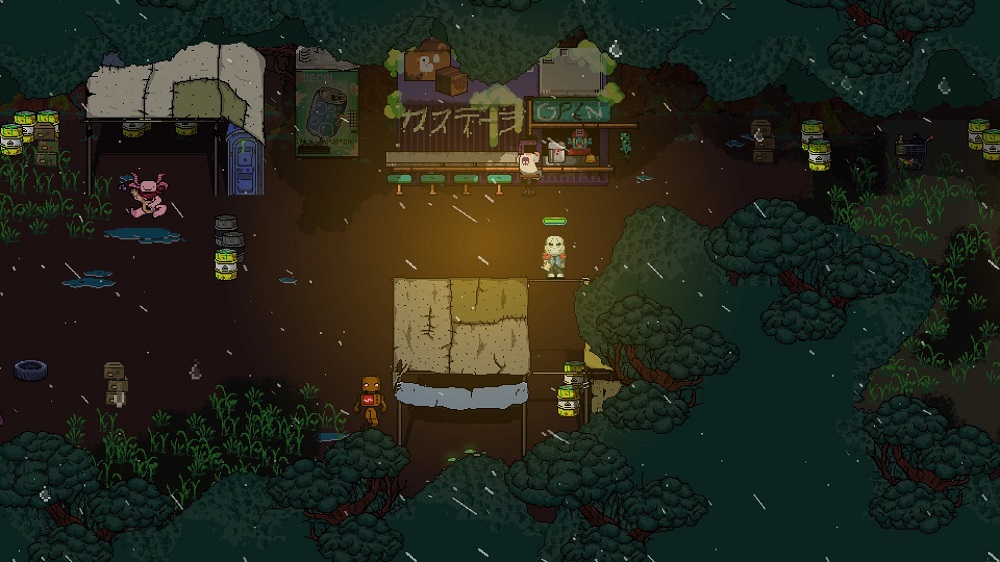 There’s a lot to like about Neon City Riders on a singular basis. It has good music, delightful graphics, great character design, rad pixel art/animation, and some very small-yet-significant technical touches. It also wears its difficulty with pride, daring players to step up to the threats of its old-school toughness. But ultimately the gameplay doesn’t meet the engagement of the design, and becomes wearying over time.

Still, the positive here is that Mecha Studios are clearly a talented bunch and, despite NCR‘s flaws, its merits still shine brightly. I’m hopeful that the developer’s future projects will capitalise on the team’s clear strengths, as well as their obvious adoration of gaming’s golden days.

Initially, Neon City Riders is a delight, sporting great pixel artwork, fun characters, and lively music. But after a few hours the experience wears thin, as its attractive world starts to feel empty and its quest disengaging. While the challenging setpieces are never unfair, their relentlessness may beat some players into submission. Neon City Riders shows undeniable promise, but doesn’t succeed in truly ensnaring players in its alluring nu-wave nightmare.