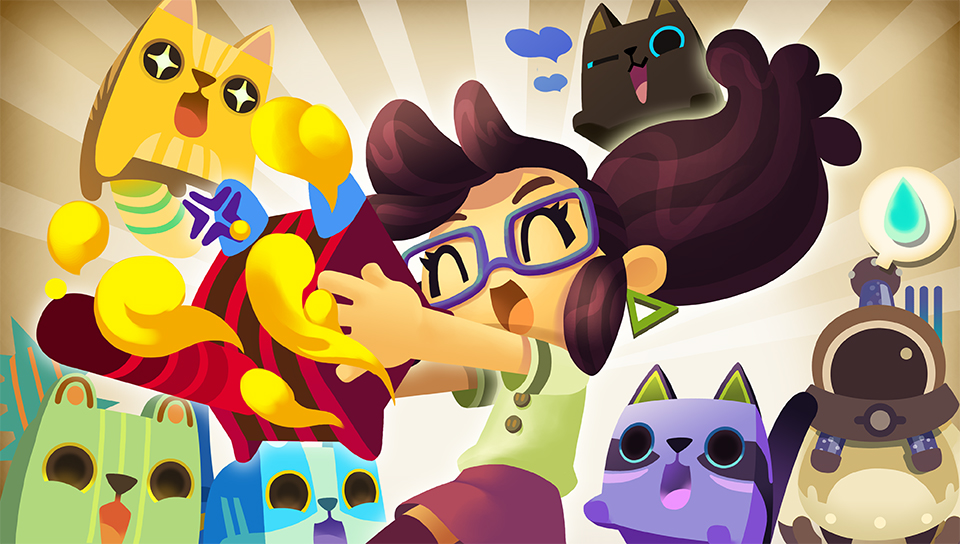 I love pussies, my dad loves pussies and my Grand Peppers loved pussies before he met his untimely demise on that trampoline — RIP Grand Peppers may you continue to love pussies in the afterlife. But, we are all fluent in the language of the pussy. Unfortunately whoever was tasked with translating Nekoburo: Cats Block from Japanese into English was clearly not fluent in either language.

Luckily, story isn’t that important in a game about making square space cats go ass-to-mouth like a cat block centipede.

Square alien cats made of electrical waves are passing the Earth when a solar storm strikes, knocking them to the planet. One of the cats gets found by a human female who takes him home and treats him nicely, so he decides to summon his pals through her television to join him living with his new servant. If this somehow related to the gameplay other than featuring said cats, it was never apparent.

Levels consist of a standard falling from the top of the screen match three mechanic, three cats fall from the top of the screen that can be moved left to right and be reordered on a tilted playing field. Each level has a specific quest such as clearing a certain number of cats of a certain color within a timelimit, or surviving for a set amount of time while cats drop quickly. Matching three or more cats of the same color in a horizontal, vertical or diagonal line will clear them. Clearing cats also fills up a meter that grants items that help clear the board such as horizontal and vertical bombs, a grid warp that clears a set of nine surrounding blocks, clearing all cats of a single color and a rainbow block that clears the entire board.

Acquiring these items and knowing when to use them are an important part of the game, as each level seemingly has a specific way to complete it. For example, one level has what look to be tofu blocks slowly advancing from the bottom of the screen that can only be cleared with items or clearing cats in horizontal lines. In this level the only real way to complete the level is to constantly build up and use items to keep the middle of the screen cleared, as the middle is the only area that can cause a failure, the other rows don’t matter and stack up past the edges of the level with no repurrrrrrcussions.

The levels are laid out in such a way that it forces you to learn the mechanics of the game with no hand holding. One level may require so many vertical bombs to be used to clear it, thus teaching you how to effectively use them, another may require rainbow blocks be detonated which is extremely important in later levels.

After every 10 levels a new cat will materialize through the TV in the human’s house, in tow with its own personality, background information and colorful comic. Unfortunately the dialogue and background information is so poorly localized it is basically incomprehensible. I’ve played a lot of poorly localized games in my day — looking at you Zero Wing — but this one was easily the worst. Here are two examples of the awfully translated text: “He hope to become an charming men as chocolate,” and “Even though fiery rude, he have sense of justice. He did something that against the grain with him, because think to much.”

Nekoburo isn’t exactly a hard game as it is random — or more specifically, the difficulty is mostly due to the random generation of the falling cat blocks. Sometimes, exactly what is required to complete a level will spawn, other times you’ll have to work for it. This isn’t specific to any level though, so it isn’t like the levels are specifically designed to spawn cats in a certain way, at least it seems that way on the surface level. Multiple attempts at the same level will eventually yield positive results, allowing level completion, other times the game just seems to be against you. Though this is the case with most puzzle games, so it isn’t exactly a new problem with the genre — it’s just worse here.

Between levels you can customize the apartment with furniture, and play with the cats with toys, both of which are unlocked by completing certain goals attached to them. While the cats are uber cute, this portion of the game left much to be desired; the furniture can’t be moved, and the toys aren’t exactly fun to play with more than once. One of the toys is turning on the TV for the cats to watch, the screen just lights up white as the cats sit there, not what I’d call a toy or entertaining.

The story mode can be completed in around six or seven hours, mostly due to trial and error. A survival mode is unlocked around half way through the story mode that is just an endless mode that increases in difficulty, much like marathon mode in Tetris. As there are no online leaderboards and the furniture is little more than pallet swaps there is little reason to continue playing once the story mode is finished unless you’re a completionist.

The best thing about Nekoburo: Cats Block is the art style; everything is bright, colorful and super adorable, but take that away and you’re left with a generic, poorly translated puzzle game with a tilted playing field that doesn’t compliment gameplay.

Nekoburo is certainly not the cat’s meow.