I’ve often wondered what it’s like to be the final boss in a video game. To live those final moments. To have to endure the sheer cheek of some helmeted twit kicking down the barricades to your secret science city. To watch him kill your royal guard and sneer at you from what is, for all intents and purposes, your living room door. It must be frustrating. To wield such power and watch it all unravel in the face of a pipsqueak 1/15th your size. A bouncy little flea who hops out of the way of your earth-shattering attacks. Who chugs a health potion every time he scrubs his knee, while your wounds seep and fester. Who is essentially killing you by poking your ankle with a toothpick three hundred times.

It must be painful.

This is the killer pitch of Nefarious: to finally see it from the other side. Lots of games have thrust the player into the role of the bad guy, but never with such direct intention. You’re not just any bad guy, you’re an SNES-era platformer boss and your nemesis is a dollar store knock-off Mega Man. You’re the unfair final boss of a turn-based RPG, flaunting your statistically superior to-hit chance and massive HP pool. You’re the stuff of strategy guides and late-night Power Line calls. They built an industry to stop you.

Sadly, this is only the pitch. Nefarious tries hard and there is a lot of heart at the core of this game, but it fundamentally fails to live up to its promise in a way that is hard to forgive. 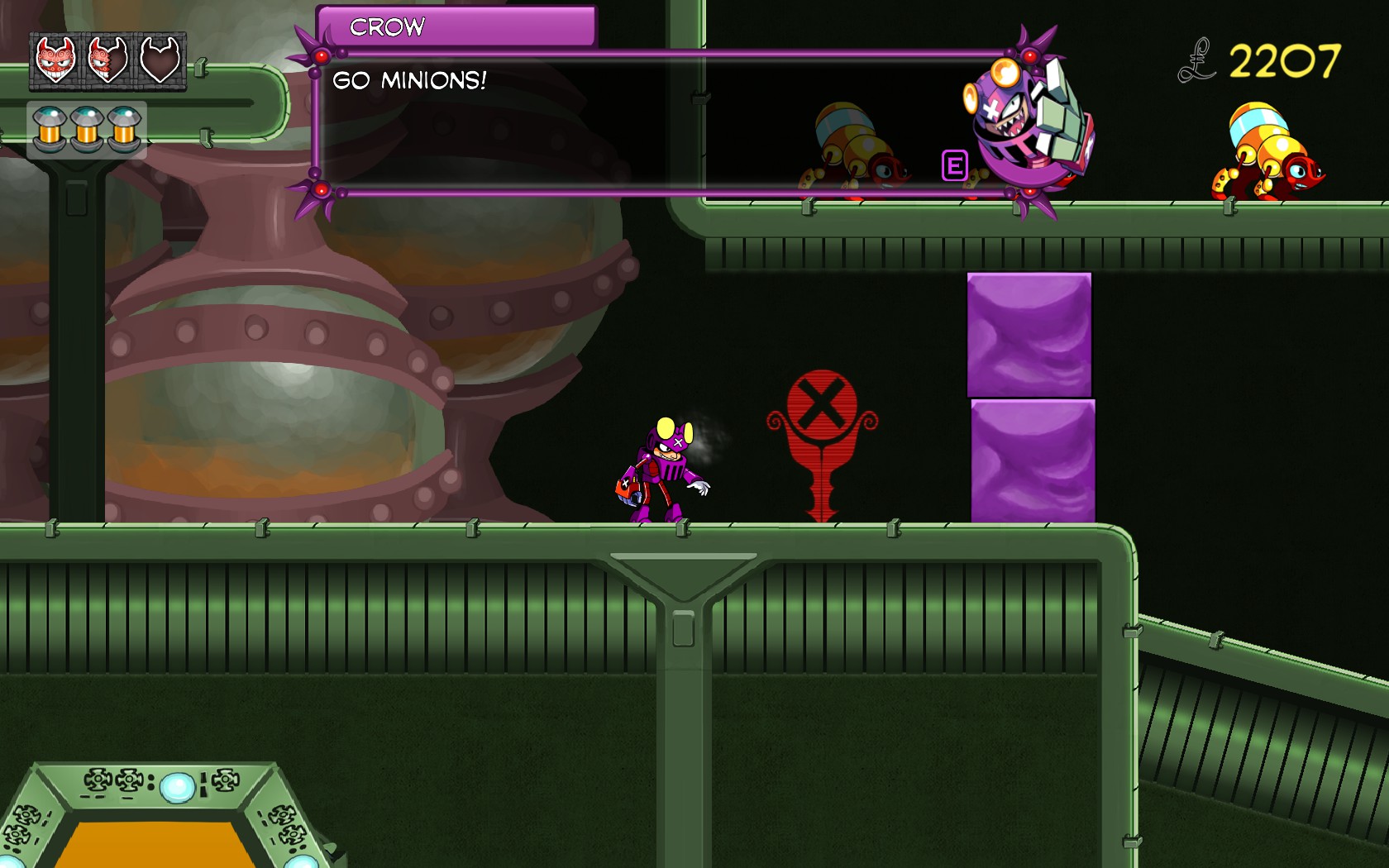 While Nefarious talks a big game about playing as the final boss of your favorite 8- and 16-bit classics, most of the experience is lived in the familiar shoes of a platforming protagonist. You travel from left to right, blowing up waves of small enemies with arcing grenades, and jumping over pits. The only difference is, you’re rushing to kidnap a princess, not rescue one.

After absconding with your princess (or prince) of the day, an intrepid hero tracks you down for a good ol’ fashion boss fight. These are the supposed highlight moments of the game, often designed as specific call-backs to classic bosses of yore. You’ll swing a wrecking ball from a floating pod like Dr. Robotnik, face off against a tank-mage-healer trio like Garland, and trample a city in a giant mech like any good shooter boss.

The problem is that none of this feels any good. The platforming parts are squishy, characterized by a slight awkwardness that never really goes away. Jumping feels weird and inconsistent. Platforming on narrow ledges is slippery. Combat is sluggish.

Your default attack is to smack a goody two shoes with a giant robot hand, which should be the most satisfying thing in the world, but feels terrible with the twin-stick aiming control and slight delay on the attack. It’s like Simon Belmont’s whip, but with a less forgiving hitbox, awkwardly aimed with a cursor, and used against highly mobile enemies who seem thoughtlessly scattered throughout the world. It’s miserable.

The boss fights are imaginative. They really do tap into the classic showstoppers of the 2D era. Unfortunately, they universally suffer from poor control. Nothing is explained to the player and the movements of the various giant death machines are so unresponsive it’s hard to tell exactly what to do. Even when you do grok the concept, the execution leaves much to be desired. Trying to nail a plucky little mascot with a giant ball and chain should look and feel like the full force of the terrible iron-hand of science being brought to bear on a sniveling worm. Instead, it looks and feels more like a drunken construction worker trying to keep it together while operating the crane, desperately hoping nobody notices how hammered he is.

A big part of what makes the game feel so fundamentally off is the total lack of sound design. You will never realize how much you appreciate the subtle work of a few sound effects until they’re gone. For a game that is supposed to be about a cackling mad scientist, Nefarious is decidedly muted. Your punch, for example, has no sound effect unless you hit someone with it. Don’t make contact, and it just looks like some silly purple man is trying to high-five his invisible friend.

Being hit elicits a pained yelp, but one that sounds like it’s being uttered through a double-pane window. Enemies fire blue and pink pulsating shots silently from their blasters. Heroes are crushed under the mechanical hands of a towering mech with nary a peep. Maybe they’re just very, very stoic. The really weird thing is, while the gameplay is as silent as the grave, the music is great. Go figure. 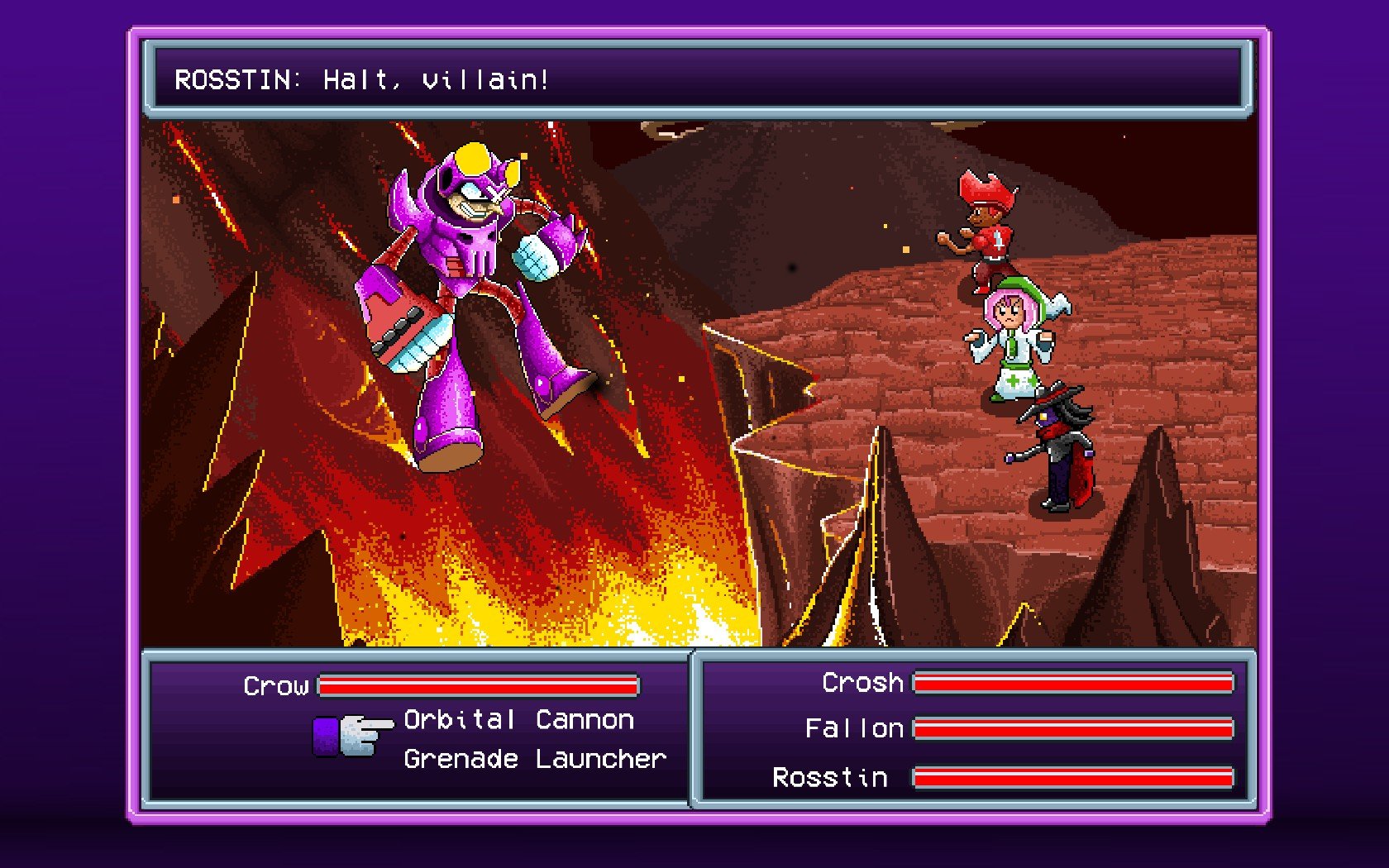 What at least partially redeems Nefarious is its heart and sheer devotion to novelty. While the platforming may be sub-par, and the promised boss fights never quite gel, there is lots more to see and do between them. Crow, the villain protagonist, is a chatty little megalomaniac and there are plenty of opportunities to chew the fat during visits to his floating airship in between each level. You can talk to your crew, your villainous secretary, and your rapidly expanding collection of captive royalty.

The various princes and princesses don’t seem to mind their shared predicament. Kidnappings are a routine event in their world, as dull and predictable as having their dry cleaning done. Much of the dialog revolves around knowingly winking at the camera and playing with the tropes of the classic platforming adventure.

While not every joke or line lands, enough of them do to make the story beats work. By the end of the game, I liked most of the cast enough to kind of hope Crow would ease up a little on the doomsday plotting. Surrounded by friends and allies, successfully negotiating peace between rival kingdoms, creating mechanical wonders he could easily repurpose for industry – I couldn’t quite work out what Crow’s grudge against the world was supposed to be. But, I suppose that’s the thing with mad scientists, they’re mad. 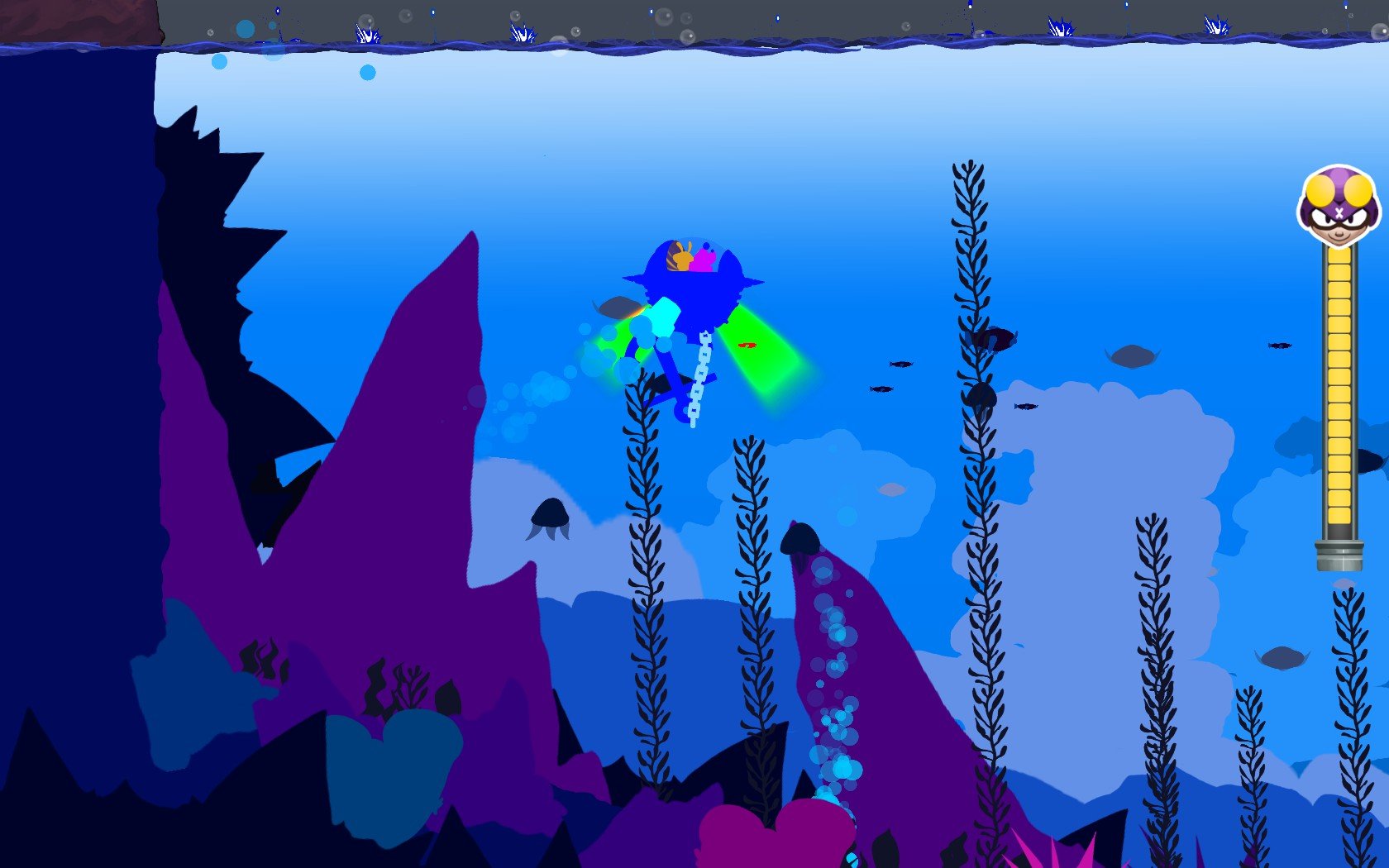 The narrative is backed up by Nefarious’ other great strength – its flair for novelty. There are several scenes that break away from the typical platforming and do their own thing in fun and delightful ways. Crow gets roped into all kinds of one-off situations from participating in a TV dating show, to visiting the world famous Villain Museum, to a very chill deep-sea diving sequence. Scavenging for treasure with one of your royal captives, just chatting, both of you secretly enjoying a chance to leave all the baggage of your roles on the surface and enjoy the calm of the ocean, if only for a little while.

These are the moments that both prop Nefarious up from being a total disappointment, and make it one of the most heartbreaking games I’ve reviewed in recent memory. There is a much better game underneath of Nefarious’ flawed exterior, dying to get out. The developers at StarBlade are possessed of so many great ideas, it’s absolutely tragic to see them struggling to express them in any kind of cohesive manner.

Take for instance the level where you find an upgrade for your grenade launcher about halfway through that leaves a trail of quickly cooling molten in its wake. Each shot creates an arcing, beautiful, dynamically generated bridge that will dissolve in seconds, forcing you to constantly fire and rebuild your own path through a maze of spikes and enemies. It’s genius. It feels like an entire game could be made out of this one mechanic. Yet, it’s tucked into one of Nefarious’ humdrum platforming levels like half a bag of Cheetos left over after a party. 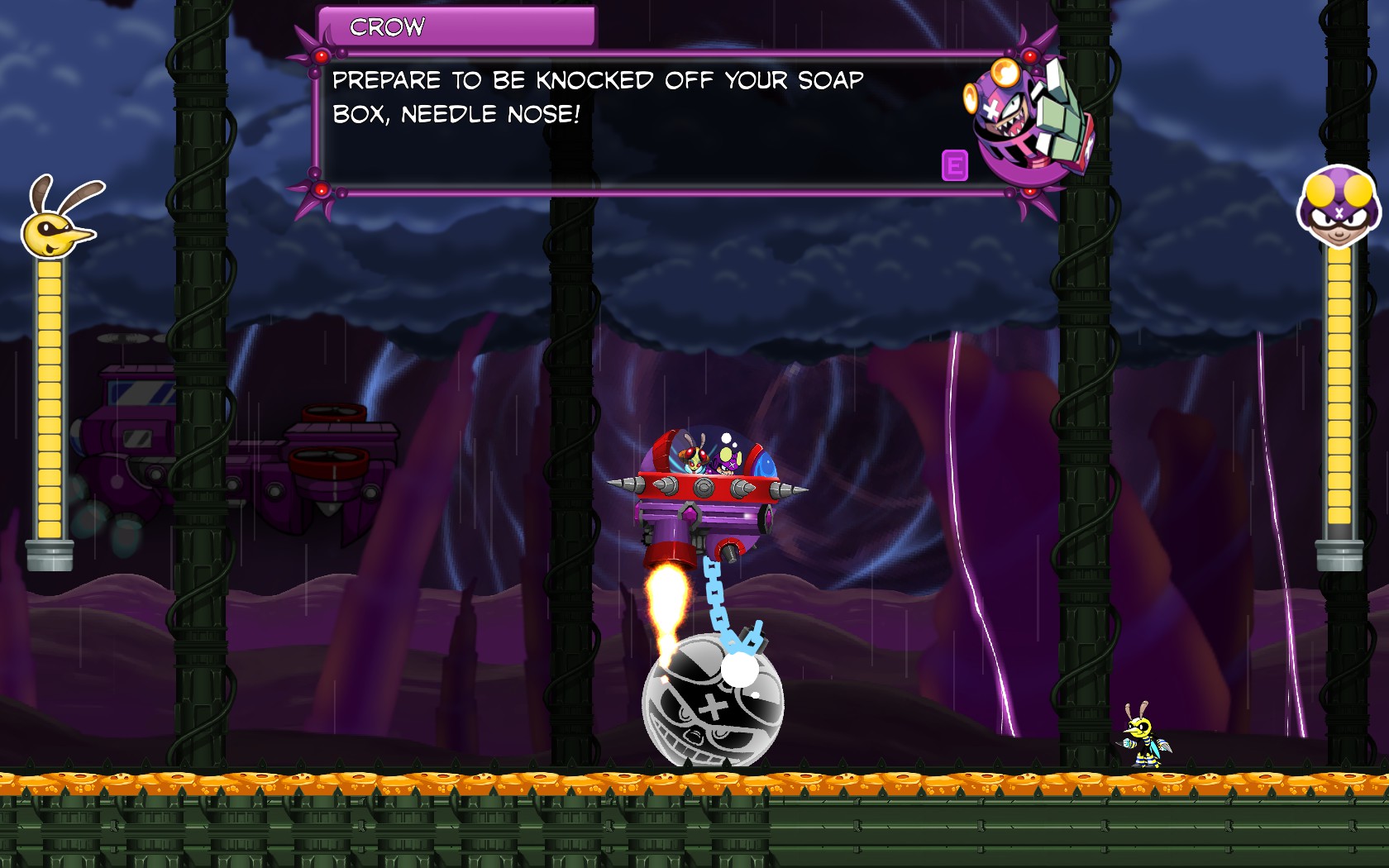 There is so much heart and so many great ideas in Nefarious that I want to see it as a better game than it is. I want to be able to recommend it as a hidden gem in Steam’s massive collection of throwback indie titles. But I can’t. It’s a sloppy game that feels in many respects half-done. All the heart in the world can’t make up for something that just isn’t fun to play.