I can’t say I’m big into the visual novel scene. I love me a good story, but it’s rare that I actually play visual novels. I do thoroughly enjoy what have been deemed “walking simulators,” though, so please don’t think of me as someone who wouldn’t consider these genres as “games.”

I’ve got to say, if other visual novels are of the same quality of Necrobarista, I need to play more visual novels. 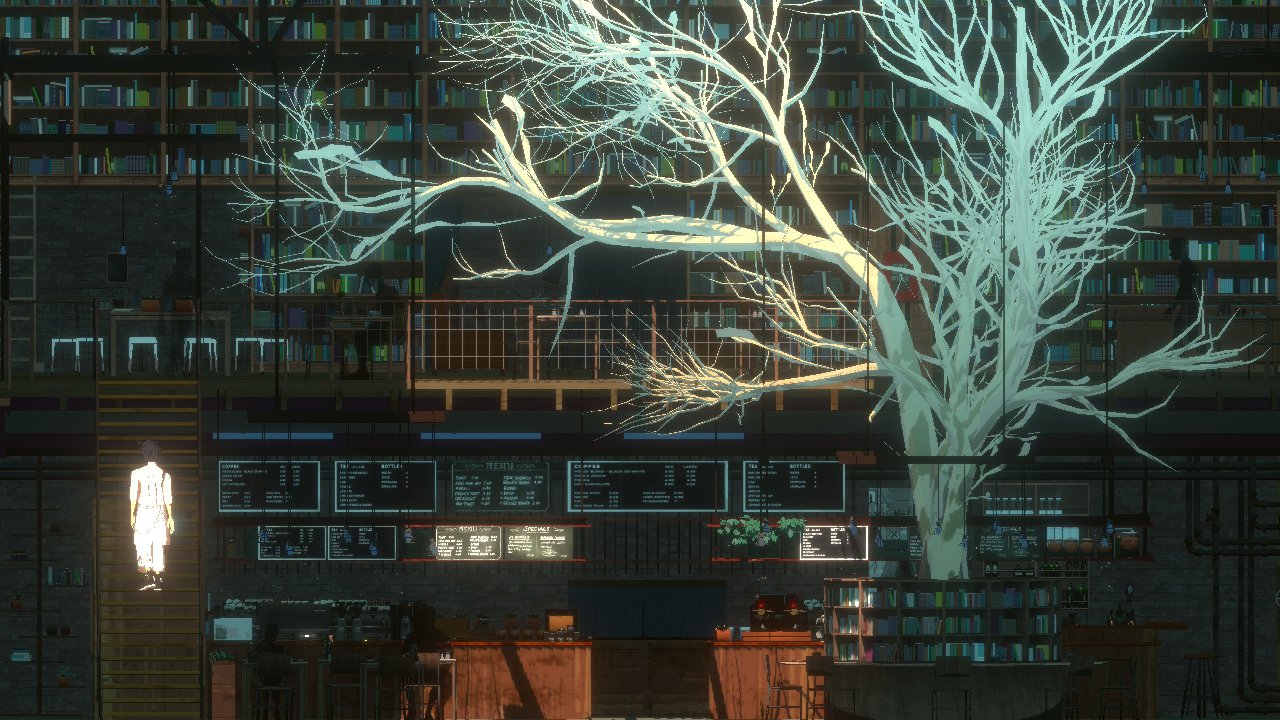 It’s important to realize how little interaction the player has in Necrobarista. There are no choices to be made like Telltale’s adventure games. There is no role-playing as any character — the player is simply an observer to the story being told here. It’s a great story to be observing, but I wanted to clear the air of any other expectations for Necrobarista.

The story itself takes place in Melbourne, Australia. Well, sort of. The main character, Maddy, runs a coffee shop, appropriately named The Terminal, that entertains guests who may or may not still be alive. A sort of inter-planar stop for those moving on to whatever comes next. That being said, Maddy and many patrons are most certainly alive, so if we’re talking about rules here, there aren’t many.

Obviously there will be no spoilers here, but the story begins with a newly dead patron (who acts as the audience surrogate) entering the shop. From there, we slowly get to learn a truly unique cast of characters over the game’s approximately six-hour runtime. There’s even a guy who inexplicably has the head of Commander Video from the BIT.TRIP series, which is something that has to be intentional, right? Anyway, I don’t want to go into any details, so just know that I absolutely loved every character in Necrobarista and felt caught up in its world, yearning to know more each chapter. I almost completed it in one sitting.

I know stories are subjective and that not everyone will love everything, but I feel confident saying that Necrobarista‘s themes of loss, moving on, existentialism, and responsibility will strike a chord with anyone who plays through it. Well, at least any adult. There were a handful of times where I found myself half-engaged with the story and half-remembering some mostly forgotten anecdote of my life, which interestingly enough reflects the purgatory-esque setting of the plot.

While the player has no agency in Necrobarista, there are still things to do. During conversations, certain words will be highlighted in yellow. Players can click on these (Necrobarista has no gamepad support) to have some additional flavor text come up, something quirky or serious, depending on the context and mood of the conversation taking place.

After a chapter, these highlighted words float on the screen and the player can choose seven of them to “keep” for the sections between chapters. The words might relate to a character, like Maddy, or a place, like Melbourne, or an idea, like food or death. These become resources for the in-between sections, where the player can explore The Terminal and unlock micro-stories (called memories) about the characters using three of the aforementioned resources. For example, one memory might require the player to have kept words relating to Maddy, food, and Melbourne. Using these resources then lets the player read the memory, which unfolds in plain text with a static background. 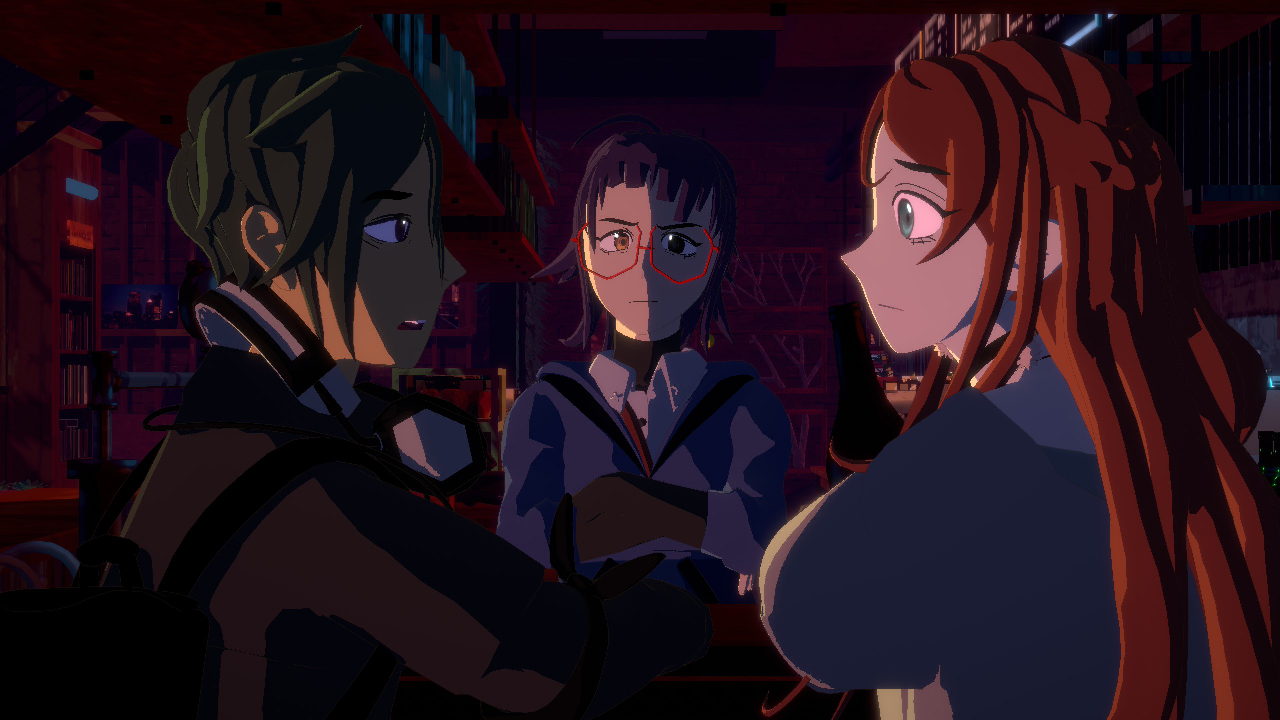 These reminded me, in a way, of the smaller stories in Lost Odyssey, albeit much less powerful (those stories were incredible, to be fair). Unfortunately, the only part that could be considered “interactive” has some faults. There’s no real way to know what a word represents. Sometimes it’s obvious based on context. Other times, I’d want a specific type of word (you can see what type of words are needed to unlock memories) and score none of them because it’s all so obtuse. Maybe it’s all a part of the theme of dealing the hand you’re dealt, but it’s frustrating nonetheless.

It can also be hard to locate these memories. While exploring The Terminal, items will emit a droning sound and are highlighted once hovered over with the crosshair, but I felt I explored the place pretty thoroughly and still couldn’t locate about five of the memories. Locating the sound is not easy, and it wasn’t clear to me if the sound still emits from items I already discovered. If the items emitted some particle effects or had the faintest of glows, it would have made finding these stories much easier and more enjoyable.

There are also some oddities with the text in these memories. While I never had issues with the main plot text readability, I did occasionally struggle to read some words depending on the backdrop. These were rare, however, and never impossible to discern (there are text options in the menus, and for reference I had the outline set to the highest it could go). There are also some oddities with how the lines are presented. Text only advances upon player interaction (mouse click), and sometimes a line like “he said” is its own thing; it feels weird and unnecessary. And occasionally one word will be left off and start the next “page” of dialogue, which also feels strange to read. 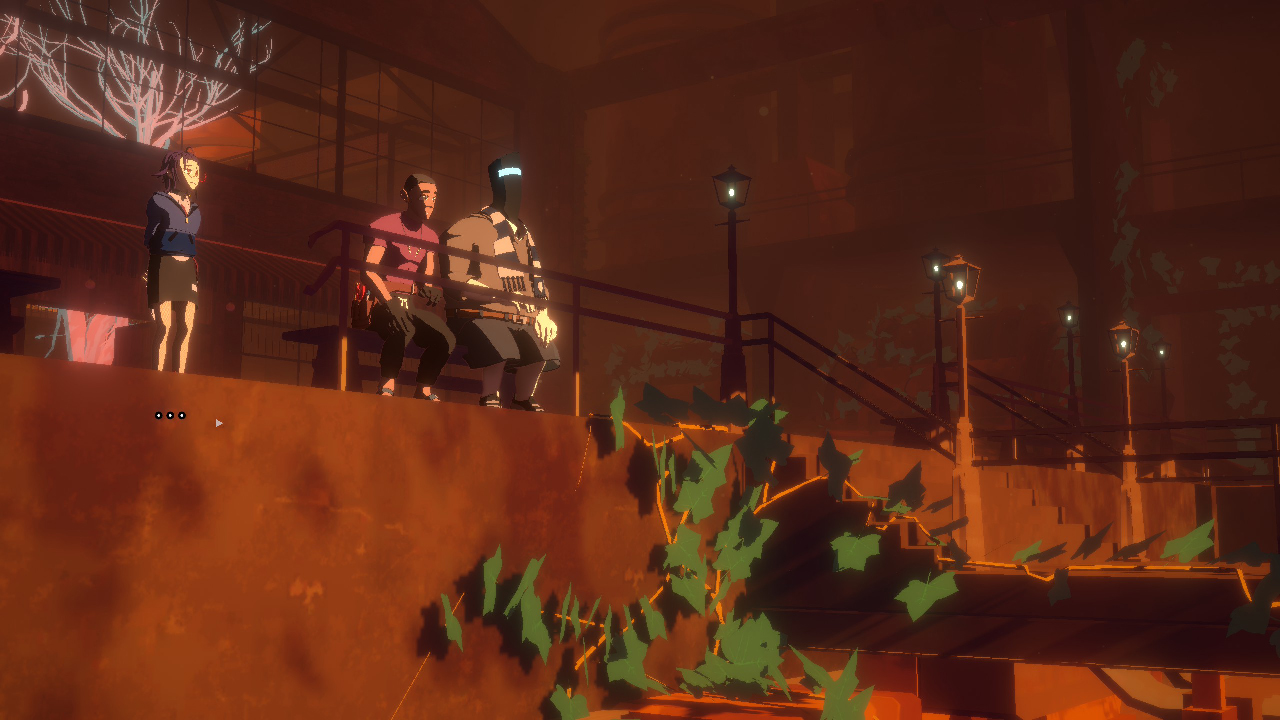 While some may be upset at the lack of voice acting, there are more benefits for a game like Necrobarista when everyone is silent. First, it works better for the player to take it at their own pace. The dialogue doesn’t advance until the player advances it, so voice acting would feel stilted and come at different and unintended intervals. Additionally, the lack of voice acting allows the game to support many languages with no preference given via voice acting. For reference, here are the supported languages according to the game’s press release: English, French (European and Canadian), Italian, German, Spanish, Chinese (Simplified and Traditional), Japanese, Korean, Russian, Turkish, Arabic, Brazilian Portuguese, and Dutch. While I cannot vouch for how great these translations are, it’s wonderful to see so many languages represented.

The aesthetic is absolutely gorgeous. Both the visuals and the music deserve the highest of praise. The anime-inspired characters might turn people away, but those people are missing out on one of the most poignant stories in recent memory. For anyone who is a fan of cinematography, Necrobarista knocks it out of the park. For reference, I took 68 screenshots during my playthrough, and they are currently on rotation as my desktop background (and are used for every image in this review). Moments are framed so damn well for the player, and the occasional slight animation juxtaposes well with the still shots to create a memorable visual delight.

As for the music? Also tremendous. Kevin Penkin, composer for Florence and the anime Tower of God, crushes it yet again. Each song is used perfectly to set the mood for the scene being played out. If there’s a soundtrack bundle when buying the game, buy it. If you’re into vinyls and they release one of those? Get it. Otherwise, just listen to it on YouTube, but naturally I recommend playing it first. It’s not often that a soundtrack leaves an impression on me, but I left Necrobarista wanting to simply continue listening to the music (and I have been while writing this review). 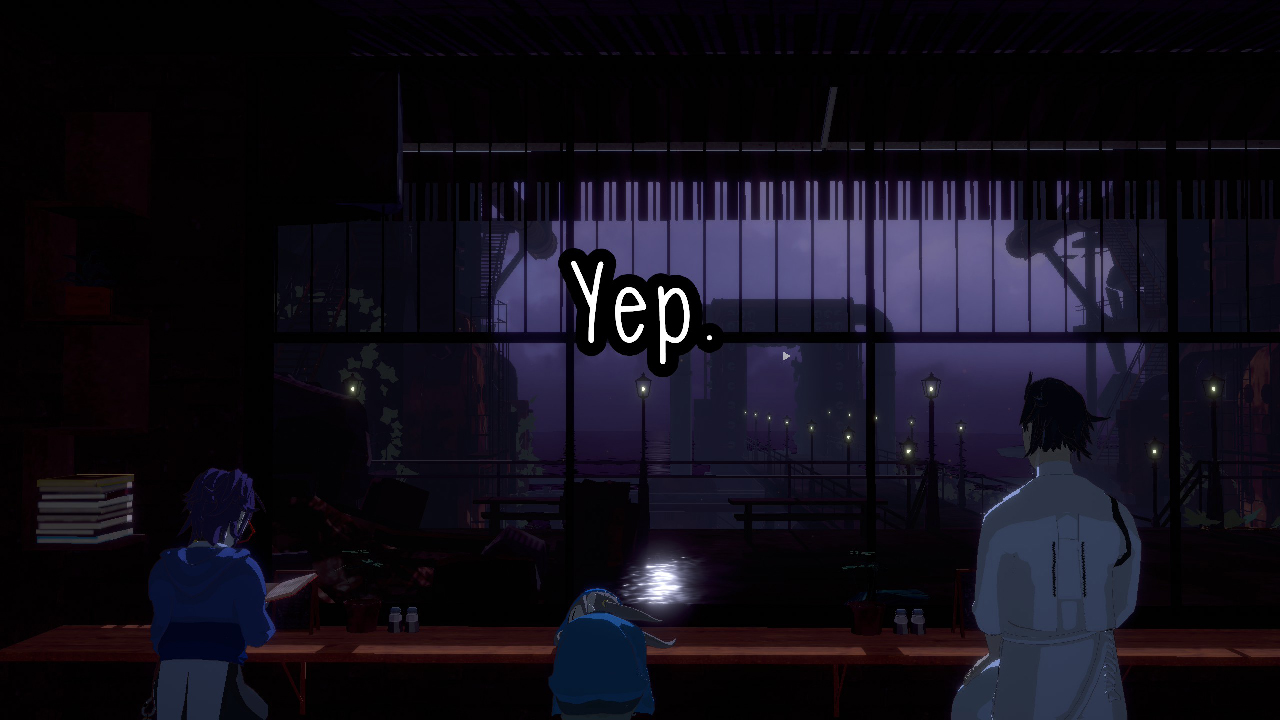 You know, last week I’m not sure I could have told you the last time I cried while playing a video game. Maybe it was Persona 4 on the PlayStation 2? I’ve been introspective a lot, but rarely sad and on the verge of crying. Well, now I know exactly the last time a video game made me cry, because it was yesterday while finishing up Necrobarista. While I have some qualms with how the game’s “memories” are handled, it’s such a minor quibble in the grand scheme of things. For anyone interesting in a wholly unique story that is almost guaranteed to sink its hooks into you, look no further than Necrobarista.

[This review is based on a retail build of the game provided by the publisher. Kyle MacGregor, who works for Stride PR for 59 Games, was previously employed at Destructoid. As always, no relationships, personal or professional, were factored into the review.]