“Another year, another [insert sports title],” am I right? Yes, with the autumnal winds blows in the latest crop of sports games, including the harbinger of Maddens to come, NCAA Football 13. As I am tenuously optimistic about Madden 13 being interesting this year thanks to a new physics system, I was hoping NCAA 13, which I didn’t get a chance to catch at E3, was going to be ushering in a similar attempted revolution.

Instead, what we’re left with is more of the same, wrapped with a really pretty bow, as its aging base framework fails to captivate despite all the glitz and glam and high marks for presentation. There are some cool things about NCAA 13, but it’s hard to credit it when the actual footballing has seemingly fallen so far behind on the priority list. Familiarity breeds contempt. 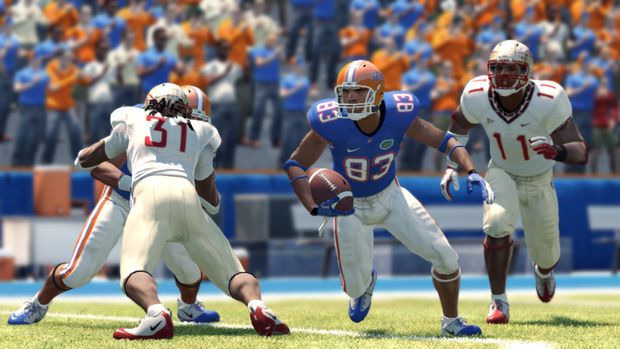 What impresses me most about NCAA 13 is its presentation (damning praise). A bunch of new stadiums and mascots and traditions have been added, paired with the already existing collegiate band sound, all of which adds up to a cool little nod to the real world in its authenticity. On the front end, the facsimile of EPSN’s College Gameday facade is indeed impressive in its accuracy and well laid out. Unfortunately, the menu is simply a means to get into the bits of the game you want to play and all the pageantry of school specific cutscenes and the like, per usual, quickly become things you simply mash buttons to get past. And when you get into the core gameplay, that luster begins to look like someone painted over water damage.

As expected, NCAA 13 features a hodgepodge of core gameplay tweaks. Most noticeably, QBs are much more competent this time around. Certain mechanics that have been Madden staples for a number of years — like the ability to lead a receiver away from defenders with an aimed pass — have thankfully been added. One other welcomed addition is the ability to abort a play action fake, which is nice when you encounter an unexpected blitz. Of course, the friends I play football games with blitz like mad, so I’ve long since erased most play action fakes from my repertoire because of the cumbersome, lengthy, fake animations.

All is not smooth sailing in the passing game, however. Defensive players are a little less freakishly adept at picking off balls than in years past; I saw fewer magnet hands and linebackers mysteriously putting their hands up to pick a ball over their shoulder that they shouldn’t have even known was there. Still, defensive backs can break on balls with some suspicious quickness. However, the biggest issue in the passing game is timid receivers. 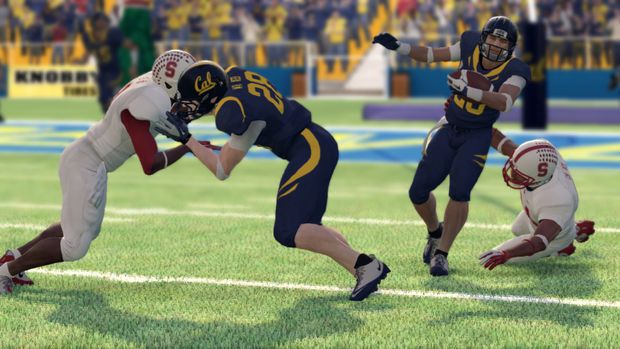 While the game boasts over 430 new catching animations, receivers are frustratingly content to run their routes by rote. They never make appropriate contextual adjustments. An outside receiver running in a route will literally run right into a spying middle linebacker, causing an awkward animation in which they vacantly rub up against each other, rather than run underneath him or behind him into the open field. Even more aggravating, receivers rarely seem to want the ball. Despite generally having a size advantage over the smaller defensive backs, they don’t use their bulk or height to maintain position on the ball in tight coverage. In general, they just don’t try and go after the ball, particularly on curls or hooks or other routes that leave them standing idly by in space after they’ve run them.

Legacy issues persist, too. Streaks and seams by slot receivers and big-bodied tight ends over the middle are still ripe for the picking as an effective, lazy offensive strategy that the defense never adjusts for. The blocking is baffling. While the offensive lines I played with were generally competent in keeping my quarterback upright, everything changes when there’s a ball carrier they’re supposed to be blocking for. It’s so unbelievably frustrating to have two enormous blockers in front of you in wide open space on a halfback toss, and then to have both of them run right by the defensive back that’s coming in to tackle you for a paltry gain.

Outside wide receivers, generally not the most competent of blockers, are actually okay. The players whose job it is to block, like fullbacks and linemen, will just let opposing players run right past them. I get that players aren’t perfect, but the frequency with which blockers screw up is staggering. I’ve seen linemen in space move to the side to let opposing players hit me. This isn’t an instance of a defender making a good play or some such football occurrence; I’ve literally had blockers and opposing players running in straight lines towards each other, only to see the blocker agilely avoid setting up a block at the last minute (and not even to — mistakenly — try to block a different player). Your punt team seems equally content to have three or four blockers sit a few yards in front of you and let one opposing player run by uncontested to light you up. It’s maddening at times. 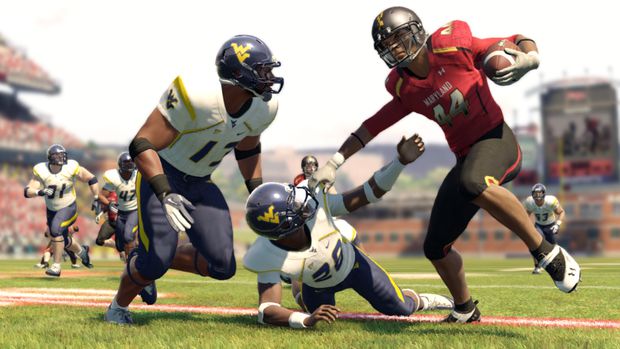 Despite some annoying issues, NCAA 13’s biggest problem is that the core mechanics are simply dulled by the franchise’s repeat performances. Despite the supposed injection of new animations, holdovers from years past take so much of the thrill out of the sport. It’s more of the same. More minor fixes and more problems, both persistent and new. Things like the newly added Heisman Challenge, which lets you play out the career years of past Heisman winners in an attempt to equal their numbers, and tweaked Dynasty and Road to Glory modes are all well and good, but everything is dependent on the core gameplay, which hasn’t seen substantial change to get excited about.

Heisman Challenge was fun, to its credit, but the numbers those players put up are a bit less gaudy in the virtual realm. With a week 3 99-0 victory (against a particularly bad team) in which I rushed Barry Sanders for 550 yards and 11 TDs, that I would at least match his Heisman numbers was assured. Then, it became a challenge of by how much I could eclipse his marks. With that sort of score-attack mentality, trying to pile on as many points as humanly possible, I actually enjoyed the new mode, as well as the new “Reaction Time,” which lets you slow down time with L2 and helps in circumnavigating shoddy blocking. Of course, on defense Reaction Time also replaces the strafe button, which makes it rather challenging to keep positioning.

Still, my fun came solely from that score-attack mentality, not from playing a good game of football. Similarly, the Mascot Mode was another bit of the game I enjoyed for its novelty and arcade feel. In it, team of schools’ real-life mascots go head to head, all with maxed out stats and cool sideways flip evasive maneuvers. Seeing the limbless Stanford Trees throw and catch footballs was amusing. Also to the game’s credit, the online component ran as smoothly as I’ve experienced while playing, though I did have an issue or two of getting disconnected from a game that was well under way. EA’s servers seem to be down quite a bit, which also precludes you from tracking your stats, and the loading times, in general, can start to wear on you. 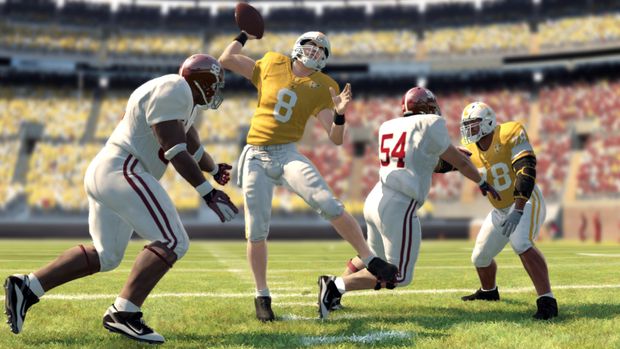 I don’t envy the Sisyphean task developers of these titles have. Sports games are not easy to make. The multiple AI characters attempting to work in unison can’t hold a candle to skilled player input — particularly in a football game in which each team has 11 different players — so constant tweaks and refinements are perpetual, while players still find ways to exploit some formation or player combination or individual play. Still, other studios have managed to balance innovation and iteration in equally truncated development cycles. At its best, NCAA has caught up to Madden in the passing game.

We’re in a great age for sports games. Sony’s MLB The Show, 2k Sports’ 2k basketball and EA’s own FIFA and NHL titles are all damn good games; of course, perhaps it’s no coincidence that those franchises all have direct competition, whereas EA reigns alone in the licensed football market. Even the old monolith that is Madden seems to be trying to change up its core gameplay this year. Football is quite possibly my favorite sport (only baseball would contend for that spot), but I’d rather play any and all of the aforementioned sports games than NCAA 13. It’s just not enough.