Nonetheless, Naughty Bear: Panic in Paradise was announced. Wisely deciding to relegate itself to the digital space, this cheaper — but more substantial — sequel at least seems to be worth giving a chance. After all, clearly the studio believes in the property if it wants to do it justice with another crack of the whip.

Oh wait, no … it just wants to do more of the same. Sigh. 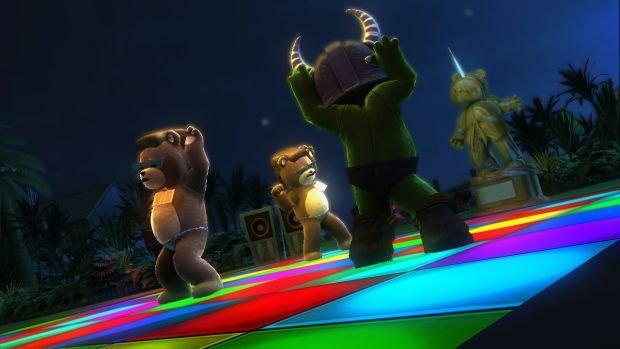 Naughty Bear: Panic in Paradise is pretty much identical in concept to the original. This time around, the ever-cuddly bears have booked themselves into an island resort for a tropical vacation, and once again decided not to invite the titular Naughty. As ever, Naughty is unhappy with this arrangement, and decides to punish his peers in a variety of violent and murderous ways.

The original game’s conceit was amusing on paper, but the charm soon wore off. With a sequel that does nothing to expand the core premise, Naughty Bear doesn’t even have the initial humor to work with. Paradise jumps right back into familiar territory, as Naughty murders bears in the same fashion he did last time. He sneaks up on victims and uses environmental objects (many of which are just cloned from the original) to skewer, burn, or otherwise mutilate them. Weapons can be used to beat or execute enemies, and traps can be used to injure, distract, and terrify. Committing atrocities in front of crowds can eventually drive victims insane, make them attack each other, or inspire suicide.

All of this is pretty much copied and pasted from the first title, though some effort’s been made into adding a lot more content. Naughty Bear can now disguise himself, Hitman-style, by dragging bears into the woods and stealing their clothes. There are also quite a few weapons that can be used against the do-gooders, which would have been excellent save for the fact that most them behave identically to one other, and use the same execution animations. There are more bears to slaughter, bigger maps, and a fresh leveling system in which individual bits of armor and weaponry gain experience in a fashion similar to Infinity Blade. Naughty can now wear costume pieces for his face, head, torso, arms, and legs, all giving a boost to his stats.

These additions, however, are merely surface-level enhancements implemented to create the illusion of something bigger and better, and do nothing to fix the game’s core problems. It takes only a few minutes to work out that, no matter what weapon you use and however the environment’s exploited, you’re still essentially repeating one vaguely funny joke, told badly. What’s worse, it’s a joke the original game already drove into the ground. You can only burn a bear’s face on a barbecue a certain amount of times before it stops having any sort of emotional impact, and all that “impact” was spent by Behavior Interactive two years ago. 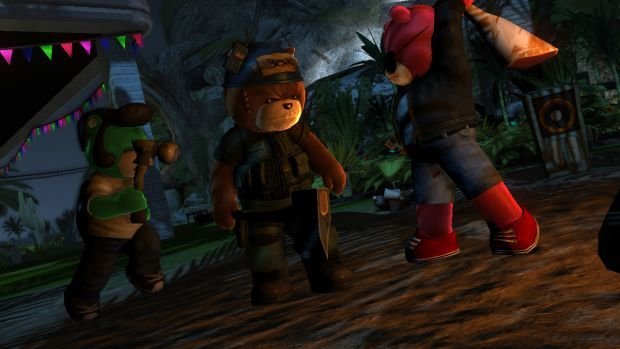 There are over thirty stages, each featuring a key bear that must be “punished” a certain way. Some need to be killed with specific weapons. Others must be defeated while Naughty’s wearing a certain costume. Others require more complex feats, such as getting other bears to attack it. The unpredictable, barely-functioning NPC A.I. can make more involved punishments a nightmare, and it’s fairly common to spend a long time setting things up in a level, only for the target to die the wrong way and render all your hard work wasted.

As more targets are unlocked, Panic in Paradise also starts exploiting itself to drag out the running time, forcing you to replay other stages to obtain specific costume parts, or giving you such vaguely defined instructions that you’ll spend ages working out the requirements through trial-and-error. If you’re the kind of gamer who judges a title almost exclusively by how long it is, you’ll be pleased to know that there’s enough content to keep you occupied for quite a while, more so than many PSN/XBLA releases.

I’d had too many instances of bears either getting themselves killed in the wrong way — or the incorrect execution occurring due to my not being stood in the exact desired place — to want to slaughter all of the 30+ targets, however. After hours of just doing the same painfully boring crap over and over, it’s just too much. 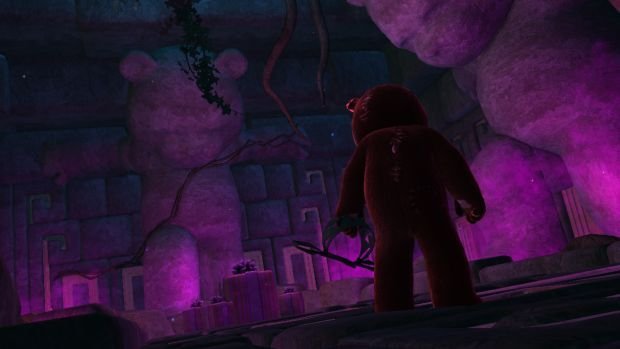 No matter how many ways Panic attempts to switch up the fundamental idea, there’s no escaping that, for all its hours of gameplay, it never changes. Sure, you might need to approach some tasks with a little more care, or there might be certain new enemies who can’t be grabbed and executed by traditional means, but no matter what the challenge is, you’ll still end up watching the same unfunny kill animations, setting the same bear traps, and throwing the same generic teddy at the same generic cactus. Any problem will be solved by simply working out which solution of the ones you’ve already used needs to be tried again in that particular instance.

As if that wasn’t excruciatingly dull enough, Naughty Bear‘s successor frequently crashes. I’ve had to restart the game, often halfway through a stage, no less than four times due it freezing on me. Given the lack of checkpointing and the fact that some missions rely purely on luck, having a successful mission suddenly lock up is soul-wrenching. Other problems include poor framerate and simply bad graphics regurgitated from the first tile. It’s not exactly a technical wonder.

When I reviewed the original Naughty Bear, I said that it always remained the same, and I called it a tame, bland, badly animated, and completely unpolished attempt to be clever that fell completely on its face. I said there was no incentive to keep playing, what with every weapon being used the same way and every contextual kill being a short, dull, anticlimactic disappointment. All of this applies to the sequel. Absolutely all of it. Perhaps even more. 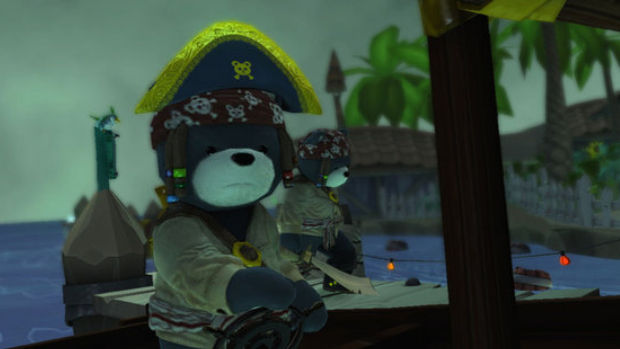 Paradise is one of the most pointless sequels in existence. Some may ask what I’d been expecting, given that it was a downloadable title. I don’t know, but maybe I expected that if Behavior was so intent on giving us another Naughty Bear, it had something new to say. Something it felt it never got right in the last game. Something … something not rubbish. Could the Studio have really been so sure that the original game was good, that it was worth doing twice? I am not sure a word exists for such a level of delusion.

Naughty Bear: Panic in Paradise is every bit as mediocre as its prequel, with the added grotesquery of laziness, exploitative padding, frequent glitching and the beating of a dead horse that had already reduced to battered mulch the last time around. I don’t know why this sequel exists, outside of a cynical cash-grab or a frankly ridiculous belief that the original was almost perfect and could get away with trying the same trick twice. Both circumstances are unforgivable.

No game about a psychopathic teddybear should be this dreadful.