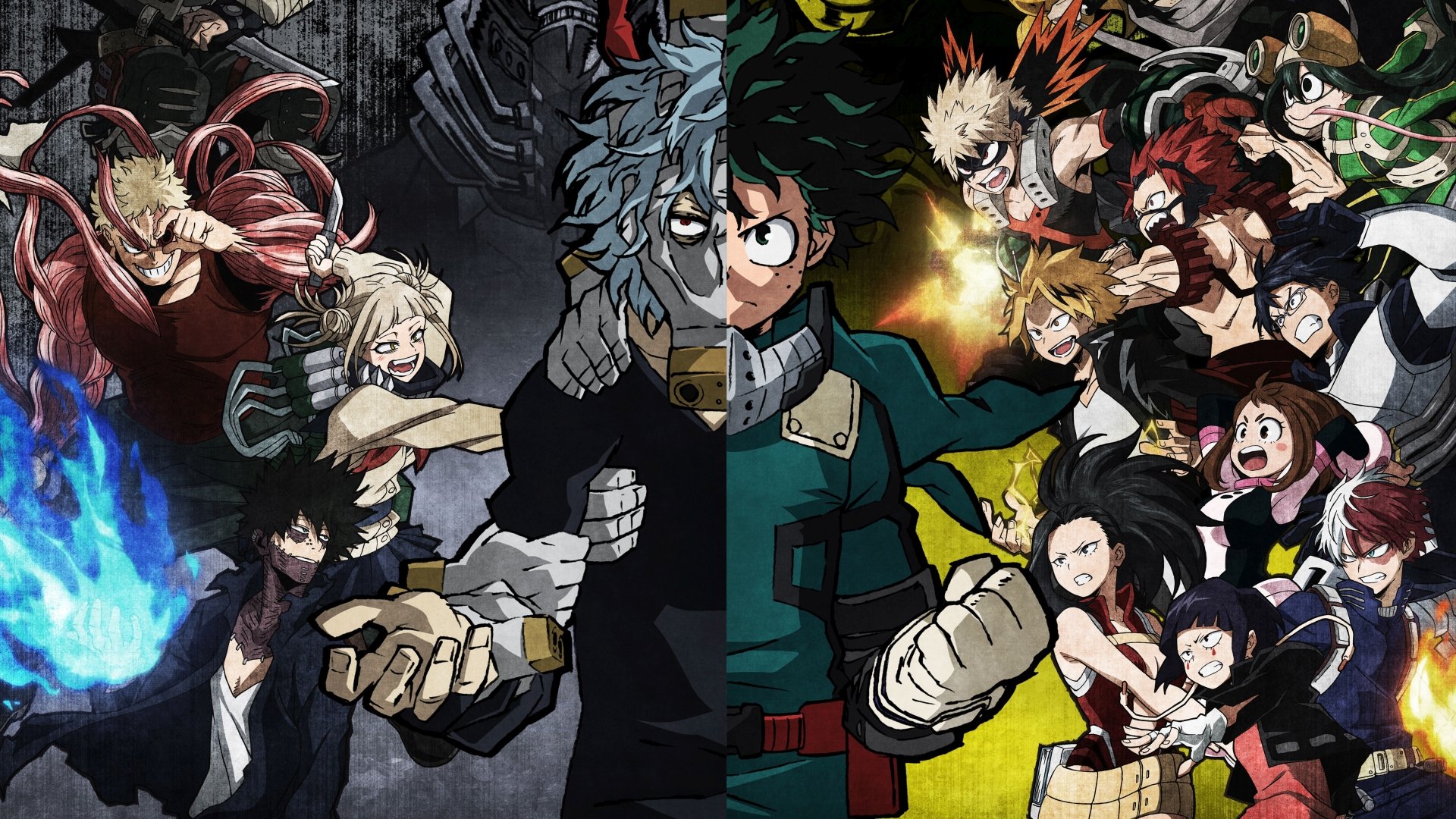 Do you know My Hero Academia? How about Boku no Hero Academia? If you’re aware of the blockbuster manga and anime series, that goes by either one of those names, then My Hero One’s Justice might just be the fighting game for you.

If you’re by some chance not aware of it… well, it might still be the fighting game for you, though at that point you’ll have to ask yourself how much you like the Naruto Ultimate Ninja Storm series.

[Note: This review may contain spoilers for the My Hero Academia anime.]

On the off chance that someone is confused about the rather awkward title, this game is indeed the English release of My Hero Academia: One’s Justice. Whatever the shenanigans  that caused this awkward re-branding may be, they haven’t affected the game underneath in any way I can detect. Fans can rest assured that they won’t need to report this game to the @bootleg_stuff Twitter account. Then again, it’s hard to make that mistake once you actually see the content. The game’s so marinated in My Hero Academia that it practically assumes players have, at minimum, seen a significant chunk of the anime series.

For the absolutely uninitiated, though, the setup is pretty simple either way. In the near future, human society has gone superhuman, as most people are now born with a superpowered ability, or “Quirk”. The change has led to the rise of a new type of celebrity civil servant: the crime-fighting Pro Hero. Chief among them is All Might, the ultra-strong “Symbol of Peace” and mentor to series protagonist Izuku “Deku” Midoriya, a hero-obsessed fanboy born “Quirkless”. Deku is selected by All Might to inherit his power (a mighty Quirk called “One For All”), and enrolls into U.A. Academy, the premier educational institute for aspiring pro heroes. There he meets his classmates, and makes some enemies, notably the League of Villains, an antisocial organization led by a murderous jerk named Tomura Shiragaki, and “All For One”, a powerful supervillain and All Might’s arch-nemesis.

All the above is pretty much covered in the opening crawl, after which the campaign mode leaps straight into the middle of the second anime season, covering events up to about the middle of the third season, with basically no deviation beyond slightly remixing circumstances to allow for more brawling. Otherwise, it’s a straight retread of what’s gone before, featuring most of the principal Hero Academia cast. To pad things out a bit, the same events can be played from the Villains’ perspective, putting players in control of characters such as Tomura, Dabi, Himiko Toga, and even All For One himself. Future characters, like Shoto Todoroki’s dad, Endeavor, and an alternate version of Deku using his “Shoot Style” fighting techniques, have been announced as DLC downloads.

Campaign stages can be replayed to fulfill challenge goals and unlock new customization options for multiplayer. A more distinct “Mission Mode” imposes stricter conditions, a basic Training mode provides a space to practice, while an Arcade mode rounds out the single-player options with a quick six-match run against AI opponents. Multiplayer-wise, basic online matchmaking, lobby, and local versus options are provided, but tournament modes or the sort of community-boosting measures that more serious fighter fans might desire are absent.

There’s plenty to get silly with for My Hero Academia fans, though, as the in-game currency shop can unlock all manner of customization options, including alternate voice lines for intros, alternate win screens, player profile flairs, and alternate colors and accessories for the in-game models. It’s nowhere near as robust as the character creators for the likes of Tekken 7 and Soul Calibur, but if you ever wanted to fight as the bird-headed Tokoyami while wearing a giant mask of his own head on top of his actual head, this is definitely the place to be.

It’s also the place to be if you’ve been jonesing for another fighting game in the mold of the Naruto-based Ultimate Ninja Storm games. For all intents and purposes, the core mechanics of My Hero One’s Justice so closely mimic Cyberconnect2’s landmark anime fighter that I’d believe you if you told me this was some kind of My Hero Academia-themed total conversion of the recent PC edition of Ultimate Ninja Storm 4. And that’s not a bad thing at all, since those games are among my favorite fighters of all time.

Like the Ultimate Ninja Storm titles, One’s Justice is an input-light fighter with 3-D movement set in a large arena. Characters can move around freely, as well as use various auto-aimed ranged and melee attacks to close the distance and set up air juggles. Normal attacks and “Quirk Specials” are easily accessed on the face buttons, and inputs rarely get more complicated than simply pushing the stick in a direction and hitting a key.

Filling a super meter lets a player toss out a “Plus Ultra” attack, which typically comes in two varieties that take up one or more “charges” of the super bar. For younger players and those who want an easier time, an “auto” mode will automatically string together basic combos, allowing players to just hammer the attack button repeatedly. Tellingly, this the default “Normal” setting, with a slightly trickier “Manual” mode letting more advanced contenders take advantage of cancels and other fun stuff.

Though the inputs are mostly uniform across the roster, every character behaves fairly differently based on their Quirks and other characteristics. Deku and All Might are fairly straightforward power fighters, but Bakugou works best when he can corner his opponent and feed them a steady diet of explosive death. Tokoyami, who can call out a shadow-like buddy to fight with, can attack from two directions at once, while Todoroki, with his dual-mode ice and fire powers, works quite differently in the air from how he does on the ground.

That said, even fighting fairly brain-dead AI opponents in story mode quickly surfaced some of the annoyances of combat. The reliance on homing attacks and air juggling makes the fighting feel a bit floaty and unresponsive, and pretty much everyone has too few ways to break out of a combo once they get caught in one. Bar a “counter” attack that has an uninterruptible animation, many fights just boiled down to who could stun-lock their opponent long enough to land a super.

Ultimately, the fighting in My Hero One’s Justice feels like it lacks the fine-tuning and more elegant qualities of the Ultimate Ninja Storm games it cribs from. Further, some aspects just don’t look right in the context of the source fiction. Byking’s legacy, making high-flying games like Gunslinger Stratos and Rise of Incarnates, reveals itself in just how much of the game can be played in the air. Jumps and dashes regularly take characters floating high into the sky, even if very few in the roster even have the ability to hover. In some of the stages that feature a ring-out mechanic, it was hilarious to see two characters just dashing and double-, triple-, quadruple- and quintuple-jumping to combo each other off of the safe ground. It was like the game was inadvertently channeling Smash Brothers at times, and unfortunately not in a good way.

That being said, it does get the spectacle right elsewhere. The game looks gorgeous, and unlike many fighting games, takes the aesthetic appeal of a super-fight just leveling the zone seriously. Though only cosmetic, there’s a level of attention given to environmental destruction in the game that I find utterly joyful. Over the course of a round players will turn places like clean city streets, immaculate classrooms, peaceful homes, and the frontage of U.A. Academy itself into a charred, smoking ruin. The sheer amount of debris flying around and oddly weightless bits and bobs being knocked about by the shockwaves, explosions, and super-powered hammer-throws is enough to make my base model PS4 turn its cooling fans on full blast (it sounded like I was playing next to a vacuum cleaner). Bar a few noticeable drops when a lot of fire or particle effects on screen, the game moved at a high, fairly consistent, framerate.

How much you get out of My Hero One’s Justice will likely depend on how much you enjoy either My Hero Academia or how much you desire a highly accessible, style-over-substance fighter. Given that we live in a time with a seemingly unprecedented number of absolutely fantastic anime fighters, that might be a big ask for some. In the end, the game’s biggest sin may be not embodying U.A.’s “Plus Ultra” spirit, and simply settling for being a decent, good-looking fighting game take on a popular anime franchise.