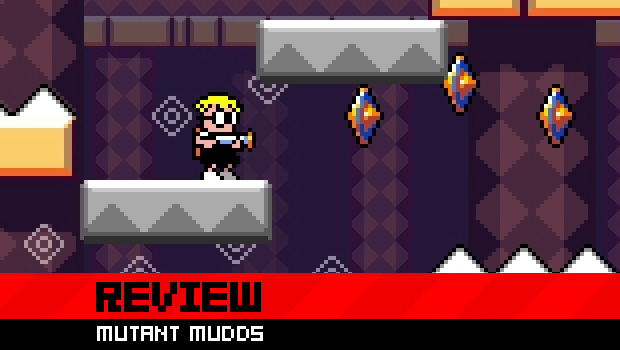 Renegade Kid does not give up easily. The developer’s latest title, Mutant Mudds, had a long, rough journey, first as a polygonal third-person shooter for the DS that never found a publisher and then as a DSiWare hopeful that likewise never garnered enough support. Only when Renegade Kid returned to the drawing board and remade Mutant Mudds as a basic 2D platformer for the eShop did the game get greenlit.

When I say “basic,” I mean basic. It is not innovative at all. The hero is not gaming’s next major icon. His weapon couldn’t be any more utilitarian. The platforming couldn’t be any more straightforward. There are no sudden play style departures. It is, in every sense of the word, archaic.

Why should you play Mutant Mudds? Because it’s a damn fine game.

A quick glance at Mutant Mudds and you instantly think “retro.” It would be easy to dismiss the game as trying to capitalize on nostalgia, but that isn’t its goal. It doesn’t just look retro, it is retro. This isn’t a bad thing, because it allows the game to stand on its own merits without relying on gaudy presentation or cheap gimmicks.

You play as a young boy named Max as he tries to save the world from the titular aliens with nothing but a water cannon and a jet pack. You enter a stage, jump over pits of spikes, pick off a few baddies, collect some diamonds, reach the goal, then move on to the next stage. This is the routine; it never changes.

How can a game with rarely threatening enemies and an entry-level assortment of floating platforms and lava pits possibly succeed? By ensuring that those barest of platforming challenges are as tight as they can possibly be. It literally cannot rely on anything else, so its success hinges entirely on how well Renegade Kid has mastered base platforming mechanics.

Mutant Mudds nails them big time. The challenge curve is spot on — the pattern of platforms and hazards is mixed up just enough from level to level that you never feel mentally unprepared. It’s plain ol’ satisfying — there is no way else to describe it.

Though the adventure can be challenging, it is never frustrating. Mutant Mudds is a fair game. With the exception of a single stage, there are no instances of blind jumps, near-unavoidable obstacles, or demands of pixel-perfect accuracy. Every hurdle lies in plain sight, allowing you to devise a strategy that best suits you. When you die, it will be because you were less than careful. The “retro” ideal is demonstrated not by cheap deaths or game-length padding but by pure platforming goodness.

The one allowance that Mutant Mudds makes in regards to gimmicky tomfoolery is the oft-touted plane traversal. When Max jumps off special pads, he is launched either into the distance or towards the screen. By populating the fore, middle, and backgrounds, the game is able to pack more action per level than it would if you were merely running from left to right.

Because of how basic the sprites and environment appear, it can sometimes be difficult in 2D mode to determine on what plane an object sits. With the 3D effect activated, the confusion is erased. And because the art is so basic, the game is especially easy on the eyes for any length of time. I had previously complained that art of Mighty Switch Force was so complex that the 3D had the adverse effect of actually breaking the illusion of depth. Here, there is no such issue.

Within each of the 20 main stages is a door that you typically can’t access until you collect enough diamonds to unlock gun and jet pack upgrades. These doors take you to secret challenge levels sporting color schemes reminiscent of Game Boy and Virtual Boy software. Yes, I said Virtual Boy. Though we may try to suppress the memory of Gunpei Yokoi’s failed “portable,” it’s nonetheless an important milestone in Nintendo’s 3D gaming development. At least it gave us the stellar VB Wario Land, which obviously served as an inspiration for Mutant Mudds.

There really isn’t anything to hate about this game. Even the chiptune soundtrack is delightfully peppy and infectious from beginning to end, though I wish there was slightly more thematic variety from one world to the next. I guess that’s not much of a complaint, is it?

If I had to mark Mutant Mudds down for anything, it would be because of the same simplicity that makes it so refreshing. Had this game appeared over two decades, I guarantee it wouldn’t have made any waves. It would have been viewed as another bare-bones platformer in a sea of me-too software. But it wasn’t released over two decades ago. It’s out now, during an era when developers regularly invest so much time and effort into flash and presentation that the core mechanics often suffer due to negligence. It’s a game that came out at the right time and said, “I don’t care about being the best dressed dude at the party! I just want to dance!” You have to respect that attitude.

Mutant Mudds is platforming distilled to its essence. It cuts the fat in order to deliver a pure, satisfying experience. More than anything, it demonstrates that “retro” should not just be pixel graphics and chiptunes but rather a thorough understanding of the basics that made a genre popular in the first place.