I was lucky to have been introduced to Cave shooters at a young age. I had a friend who lived in Japan and had family there, so he’d just bring games back over and we’d play them. Most were ported from the arcades to the PS2, but over the years, the Xbox 360 expanded its shoot-’em-up (shmup) influence, which made things even easier.

I’m happy that over a decade later, the rest of the world can experience them as well, through various iOS ports, and Degica’s recent PC platform push. They’re absolutely still worth playing, and Mushihimesama is kicking things off on Steam. 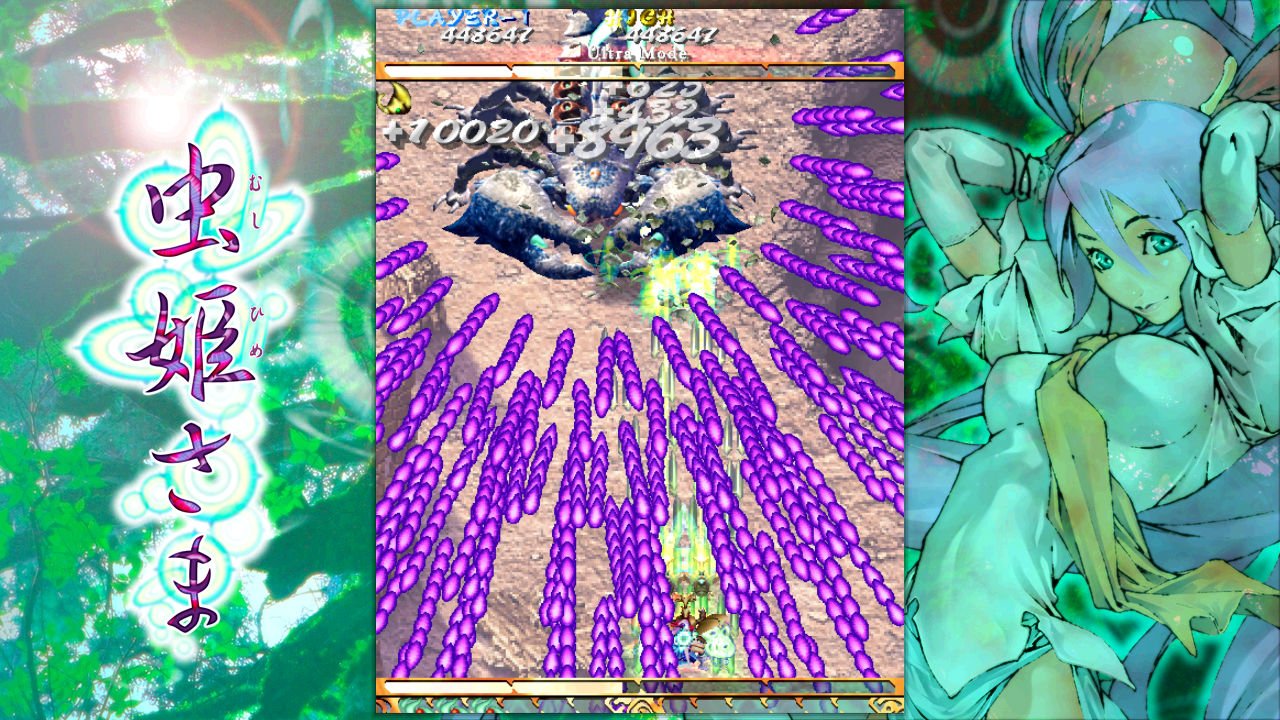 Mushihimesama is translated to “Bug Princess” in English, which is an apt name as an insectoid theme permeates the shooter. You may play the role of a human girl, but you’ll ride on a bug, blast other bugs, and take on gigantic, intimidating bug bosses. This unconventional theme (shmups usually feature traditional spaceships) helps set Mushihimesama apart from the pack immediately. Don’t expect anything in the way of a narrative, though — the story is once again rather throwaway in favor of focusing on the action (a princess races to find a cure for her village).

Bug Princess was crafted after cave had nearly 10 years of development experience under its belt, and the enemy and bullet designs really reflect that. You may have seen this infamous video from the game’s Xbox 360 sequel (Mushihimesama Futari). While players won’t be taking on that exact same encounter, the game’s harder difficulties can get similarly insane. For those of you who opt for lower settings however, the game plays out more like a bullet purgatory, with deliberate patterns that are manageable and direct across all five stages.

Because ultimately, great shmups aren’t just action games, they have elements of puzzle titles peppered in as well. While blowing things up and earning a high score is paramount, the way that Cave and its competitors design enemy patterns indicates a huge attention to detail, as they’re not just strewn about for good measure, and always have a counter to them with specific degrees of movement. This is especially true for Mushihimesama, and I enjoyed relearning some patterns as well as giving my twitch skills a test with the PC release. Thankfully, this edition also features full two-player co-op (with drop-in support) if you want to bring another friend into the mix.

As a port, Mushihimesama far exceeds the amount of effort that went into Playism’s localization of Touhou 14. It’s fully translated, there’s options for 16:9 and 4:3 aspect ratios, full screen mode, screen rotation (for vertical monitors), fully customizable controls (for keyboards and controllers), and allowances for UI additions like arcade joysticks and buttons. Players can also tweak the difficulty before each session (original, maniac, and ultra), including the total ship count and the points required to earn an extra life. It’s a limitation of the first game, but I wish there were more characters, and not just three variations of the same princess.

The difficulty curve is perfect, as original is manageable even by casual fans, maniac significantly steps things up a bit in a way veterans will appreciate, and maniac, for once, earns the moniker. Almost immediately with the latter difficulty, you’ll see regular enemies fill up the entire screen with giant bullet-curtain mazes, forcing players to use everything they’ve picked up from the genre to survive. Although it wasn’t factored into this assessment, there’s a V1.5 “Matsuri” DLC available for $4.99 at launch that essentially adds in a new arranged mode with a remixed soundtrack.

It’s a bit redundant to say as nearly every Cave shooter is a “must play” title, but Mushihimesama is required reading for shmup fans. Whether you’re going at it solo or with a friend, on the highest difficulty setting or the lowest, Mushihimesama is incredibly easy to spend an afternoon with for years to come.