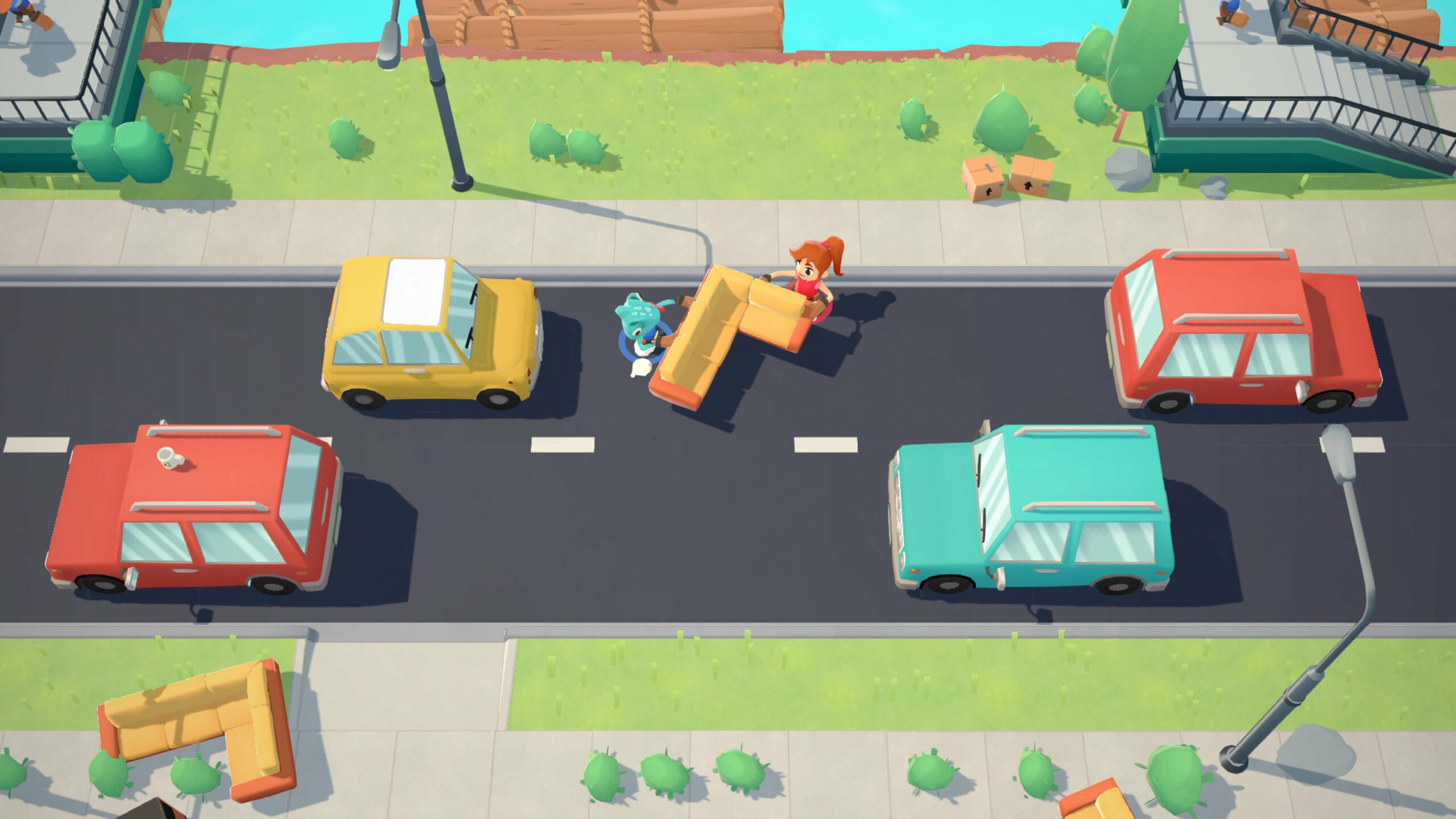 Moving is never fun when you’re the one doing the heavy lifting.

You don’t want to break the stuff you’re keeping. You don’t want to scuff up the floors or walls you’re leaving behind. You definitely don’t want to get your hopes up about a security deposit you’re going to be screwed out of no matter how thorough your last-ditch, night-before cleaning effort ends up being.

Moving can be fun in Moving Out, though. It’s an up-to-four-player chaotic couch co-op game in the vein of Overcooked. Instead of worrying about delivering timely entrees, you have to pack a bunch of possessions onto a truck as quickly – and often as recklessly – as possible. That’s the key to success.

Why tiptoe a sofa through a narrow doorway when you can hurl it onto the lawn from a window? Someone else can worry about the aftermath for once. It’s a fantastic premise for a video game.

As someone who eternally craves local co-op romps, I’ve been looking forward to Moving Out all year. It’s simultaneously trickier and simpler than I was expecting, and that’s left me feeling a little torn.

In each of the 30 main levels, you’ll see a preview of the layout – homes at first, then haunted mansions, fiery warehouses, and out-of-this-world zones – as well as the essential items you’ll need to lug to your moving truck. From there, it’s a frantic race against the clock and a never-ending communication test. Many objects can be carried alone, but some, like couches and pinball machines, are a two-person job. There are also moments where you’ll need one player to throw a fragile box and the other player to catch it without fumbling – sometimes for efficiency, sometimes out of necessity.

The criteria for gold-medal times in Moving Out is no joke. The controls are simple enough – you can jump, throw, slap, and grab objects from different angles – but you’re not going to breeze through everything on your first or even second try. I struggled to get a silver score on many of the stages.

Part of that is by design – the most efficient routes to your truck aren’t always obvious – and part of that is on the item physics and character movement, which can work in mysterious ways. I’m better at squeezing sofas through doorways than I was initially, but there’s a bit of an X factor that eludes me. I still get jammed up. And sometimes, my toaster-headed protagonist just refuses to hold tables right.

That is to say Moving Out can be weirdly finicky – even frustrating. It also takes a while to get going.

The first third of the game or so feels like an extended warmup. The locales might switch things up, and you’ll face new distractions like roaming ghosts, but you’re going to see a lot of the same furniture. Thankfully, that borderline sense of not-quite-tedium doesn’t last. Later levels include ornery barnyard animals that won’t sit still in your truck; a traffic-dodging, log-riding Frogger tribute; conveyor belt puzzles with flamethrowers; and tense lava-filled mazes that require completely in-tune teamwork.

Once the game ramps up, it’s great fun, and it ends on a high note – I just wish it didn’t take so long to get there. (The DLC for Moving Out could be amazing if it keeps building.) It’s also worth mentioning that some of the best moments are found in unlockable levels. Some of these levels require you to amass gold medals – again, no easy feat – and others will open up when you clear enough optional objectives.

That’s where the replay value comes in. You might be asked to hop over a slightly-too-wide pool, not break any windows, break all the windows, or pack up an unmarked object that was staring at you the whole dang time. Every main level has three bonus objectives like this, and I’d say maybe half of the goals are silly fun, and the rest of the bunch will elicit an “Oh god no. We have to do that?” reaction.

We beat the campaign and several one-off bonus levels in a weekend, but it would take significantly longer to perfect our times and see everything. The rewards are worth it, though. One bonus is a boulder escape; another is a couch-hauling balancing act on a thin walkway. I’m excited to unlock more.

I also have to commend the accessibility options. If for whatever reason you want to tone down the time limits, skip a level that’s blocking your progress, or tweak a few other tricky aspects, you can.

When it’s firing on all cylinders during its back-half, Moving Out can be quite challenging even with a reliable co-op partner backing you up, but the accessibility options open it to all ages and skill levels. If you can arrange a full four-player squad, that’s the way to go. More is merrier in this case.

Moving Out is less strategically satisfying than I would’ve liked, but it’s worth considering if you want something new to play along the lines of Overcooked, Tools Up, and Good Job. It deserves a spot on that co-op shortlist. At the same time, I hope we get DLC that adds more bespoke puzzle scenarios.