When the reboot of Mortal Kombat launched in April of last year, it was clear the series was back in a huge way. The game went back to the 2D style of the classic entries, fatalities were ultra-violent again, and there was seemingly endless content to enjoy.

A nice chunk of downloadable content and a Komplete Edition later, NetherRealm Studios and Warner Bros. have now moved on to bringing the colossal fighter to the PlayStation Vita. Is it a faithful port with a healthy amount of new additions, or did something get lost in translation? 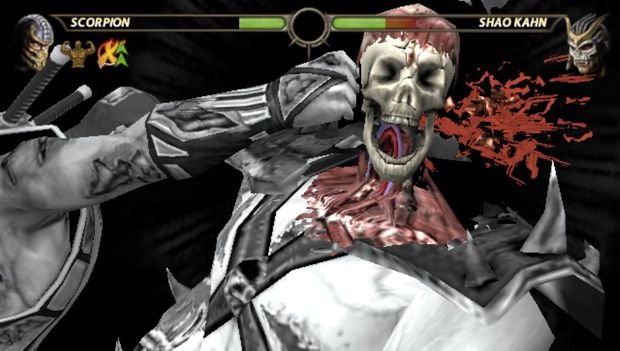 Upon starting up the game, you will find that every single piece of content that was included in the PS3 version of Mortal Kombat: Komplete Edition can be found here, except there’s no 3D support, a few changes were made to multiplayer (more on that later), and you receive no download codes for the 1995 film adaption of Mortal Kombat or the Songs Inspired by the Warriors album (you’ll hear no complaints from me).

The Arcade Ladder, Story Mode, Challenge Tower, and Krypt are all present and packed full of every single unlockable and easter egg (as well as a brand new one) from the aforementioned version. All the downloadable characters, unlockable characters — Quan Chi and Cyber Sub-Zero — and all DLC “klassic” skins are included and unlocked right from the start. 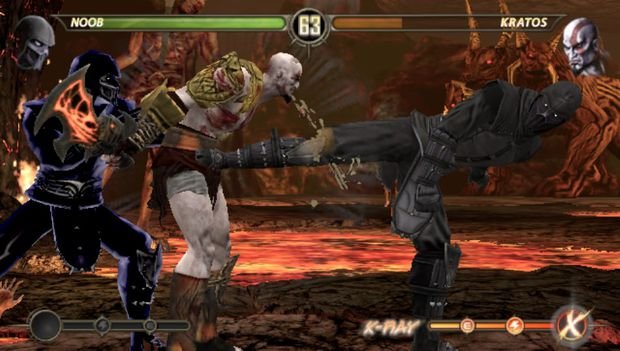 The next thing you will probably notice is that the jump to the Vita was not too kind on the character models themselves. Whenever the camera moves in close on a fighter, the textures are noticeably horrible. Having said that, once you actually start playing the game it’s virtually a non-issue. When everything is in motion, the visuals look absolutely gorgeous on the Vita’s vibrant OLED screen. They’re not going to drop your jaw like Uncharted: Golden Abyss, but they look fantastic all the same.

NetherRealm took meticulous care in making sure the framerate stayed locked-in at a silky-smooth 60 frames per second. The only time the framerate ever dips is for a split second after an X-Ray move is executed. It has no effect on the gameplay at all, but it’s something that is definitely noticeable after awhile. The fact that they were able to keep it at 60 FPS at all is impressive in itself. This is even more amazing considering they left the animated backgrounds fully intact, just as they appear on the console versions.

Trains will zoom by in The Subway, helicopters will chase down dragons as the surrounding buildings exhale clouds of smoke on Rooftop, and Shao Kahn will shift in his chair and mock you as a Tormentor fights off a couple tamers behind his chair in Kahn’s Coliseum. While these few examples are nothing new, there’s just something to be said about seeing detailed 3D animated backgrounds in a portable fighting game –especially considering Capcom had to make the backgrounds static in Ultimate Marvel vs. Capcom 3 on the Vita. It really shows just how powerful the system actually is. 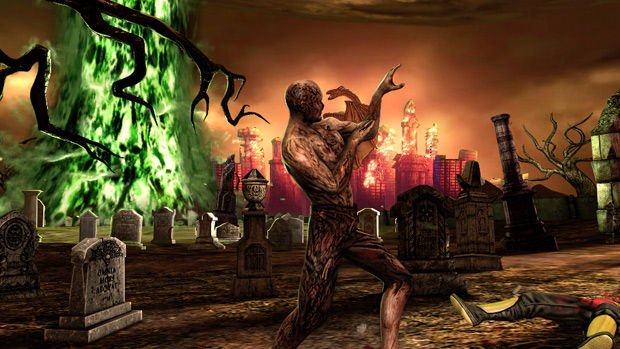 Mortal Kombat plays exactly as it does on the Xbox 360 and PlayStation 3, and the Vita’s d-pad works exceptionally well. Combos and super moves can be pulled off the same way you engraved them into your psyche over the years. All the balance tweaks and patches that are currently in the console versions are of course all here. If you didn’t like the way the game played before, you still won’t.

Only minor additions have been made to the main gameplay itself to take advantage of the Vita’s unique capabilities. In addition to pressing the L and R buttons at the same time, you can now tap the Super Meter on the screen to trigger an X-Ray move. Instead of entering a few directions on the d-pad and hitting a face button, you can just swipe the directions on the front touch screen and this will execute your fatality (or babality). There’s absolutely no way to turn the touch screen functionality off, but they don’t deter or enhance the enjoyment of the game in any significant way. It’s just as easy to use either of the options you’re given, and it really is nice to have the choice period.

The Vita version also comes with quite a bit of new and exclusive content. There are 16 new unlockable costumes that a majority of the Mortal Kombat roster wore in Ultimate Mortal Kombat 3. These new costumes can be unlocked from the Bonus Challenge Tower, another addition to the Vita version. 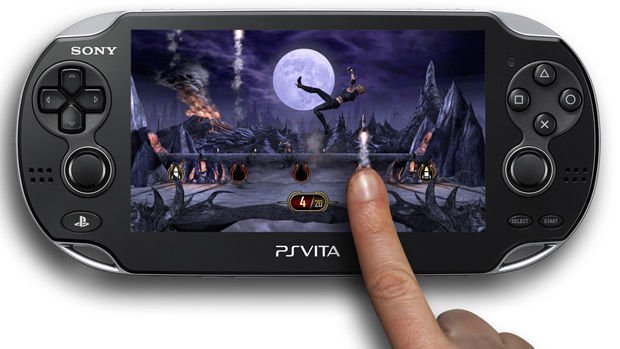 Anyone who played Mortal Kombat last year can tell you how much they enjoyed the Challenge Tower. It contained 300 missions that presented new twists on classic minigames, such as Test Your Might, while also introducing quick one-off missions that were equal parts surprising and fresh to keep the sometimes punishingly difficult but highly enjoyable Challenge Tower interesting and worthwhile to get through.

After seeing the success of the new mode (and the fact that there’s a handful of new characters), NetherRealm decided to add an entirely new tower that’s simply called the Bonus Challenge Tower. It’s half the size of the original, but one could argue it has twice the creativity. It’s presented the exact same way; you have to beat a mission to move onto the next, or you can always pay a reasonable amount of Koins to skip the current one if you’re stuck. The missions themselves are absolutely brilliant. Right off the bat, the first couple of missions let you take control of Shao Kahn, which was not in the original tower at all.

Most of the new missions take advantage of the array of control options that the Vita offers. There are brand new minigames like Test Your Slice, which is a carbon-copy Fruit Ninja clone with a Mortal Kombat twist: instead of fruit you’re slicing body parts and organs, and you can shake the system to remove the bombs on-screen. There’s also a Test Your Balance, which utilizes the Vita’s accelerometer to keep yourself suspended on a beam over a giant pit for a certain amount of time. In the harder levels, body parts are thrown at you to nudge to your death; three giant spinning blades at the bottom of the pit. 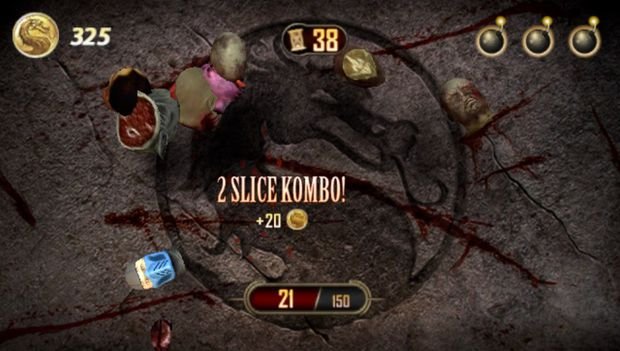 The other types of missions use the touch screen and accelerometer in a variety of truly ingenious ways. They also borrow heavily from the new characters’ back stories and abilities to create different situations for the missions to take place in. One of these puts the player up against Freddy Krueger in “Dream World” where you have to defeat him while he’s completely invisible. Another example has players controlling Kenshi as Stryker either throws fruit at them from across the stage (that you can slice through using the touch screen), or throws grenades, which they will have to touch and hold the Mortal Kombat logo on the screen to block.

Most features of the device are used (except the rear touch panel), but at separate times throughout the tower to keep things exciting. Each mission feels like it has a purpose for being there, other than just being fun to play. What I mean by that is in addition to being fun to play, a majority of the missions are a learning experience. They all help you better understand how the characters play — unless you do already — in a presentation that doesn’t feel like you’re being forced to learn something new. The Challenge Towers are also absolutely perfect for anyone who has only maybe five, ten, fifteen, or twenty minutes to spare and they want to quick play through a couple missions when they’re out and about.

There was a serious issue with only one mission, and I’m not sure if it was a question of my intelligence or if there was a problem outside of my control with it. It was aptly titled “Figure It Out” and the description tells the player to experiment with the features of the Vita, while only providing five seconds to do so. The only hint it gave was to “get a HEAD start.” The solution that I’m sure was supposed to work absolutely didn’t (it made my character, Sub-Zero, catch on fire and die), and as a result failed the mission. I tried absolutely everything I could think of, but in the end just decided to spend some Koins to skip it. 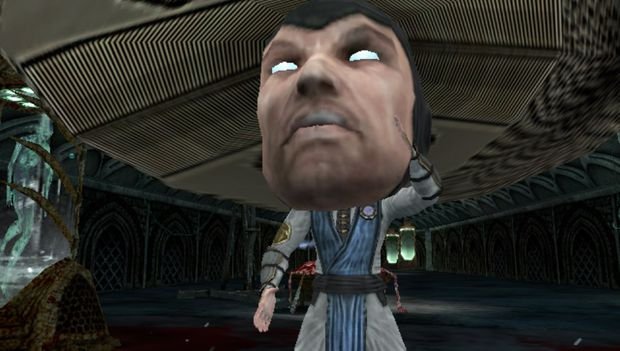 Now, onto the multiplayer, which doesn’t require an online pass. As was previously stated, to make it fit with handheld play NetherRealm had to significantly change a few things from the original. The fantastic King of the Hill mode and not-so fantastic lobby system are nowhere to be found, which makes sense. If you have the time to sit in a chat lobby or a King of the Hill match, it seems more logical to do that on the console version. Handhelds are all about quick pick-up-and-play options, and those two multiplayer modes don’t quite fit that idea.

However, there are still ranked, player, and private matches over Wi-Fi, with the ability to either play 1v1 or tag in either. If you’re around a couple of people who also happen to have a Vita and a copy of MK, you have the option of playing over ad hoc. Of the matches I played online, I experienced no lag and everything went well (except for the fact that I lost horribly). This is good news considering the multiplayer for Mortal Kombat after its initial launch last year was crippled with lag and a game-breaking bug for months. The issue was eventually sorted out, and thankfully it has not been brought over to the Vita version. 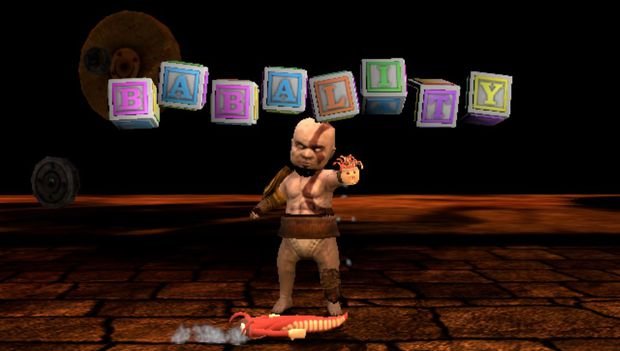 As I was playing the game, I found myself still having just as much fun as I did a year ago, even though this time I had already seen it all before. The original Mortal Kombat was a near-complete experience in itself, with hours upon hours of content to be explored, played, and found. Players can spend even more hours and hours just on the Bonus Challenge Tower alone. There’s enough new and exclusive content here that overflows with creativity for me to safely say this is the definitive Mortal Kombat experience, and at $40 it is an easy recommendation.

NetherRealm Studios has outdone themselves, and in doing so they have set the standard for porting a game to the Vita. This a perfect example of keeping the best graphical fidelity possible and including an already astronomical amount of content, while adding an even more extensive set of missions for players to explore that masterfully uses various features the PS Vita has to offer. If you own a Vita and are a fan of fighting games, there is simply no reason not to pick up Mortal Kombat.