When I first saw Mordhau, I assumed it was the next game from the Chivalry developers. Nope! It was just a Kickstarted passion project that was inspired by the aforementioned hack and slash. Either way, it’s got some great Chivalry vibes and at the same time does enough to differentiate itself and stand on its own merits.

Medieval hand-to-hand combat is a genre that I think will continue to blossom. Between Chivalry, For Honor, and now Mordhau, there is proof that no one approach is king; there is room for competition. 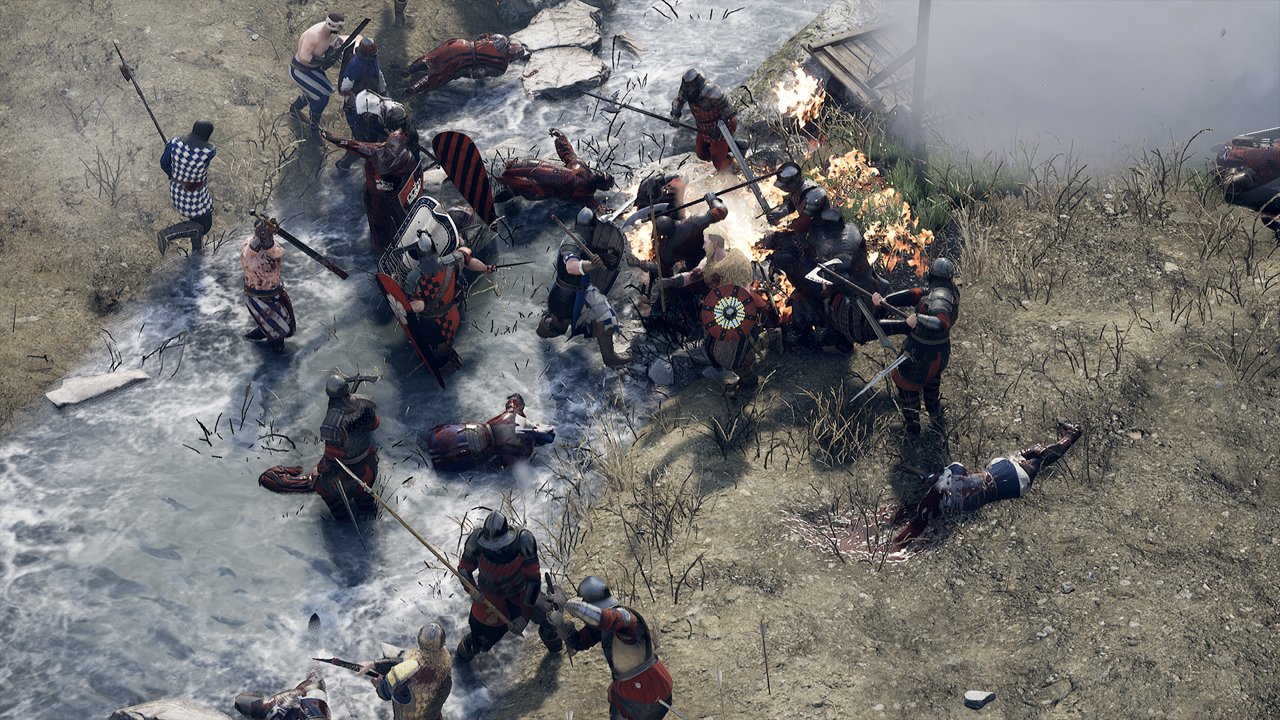 Mordhau is a melee-focused combat game that focusing on killing and maiming each other with weapons like longswords, pikes, bardiches (bardichii?), and way more.

Also, you can play a lute. It doesn’t do anything, but that hasn’t stopped me from playing it in every match I can! Since there is no story or singleplayer, Mordhau boils down to its mechanics and how they are used to full effect. This is a game primarily about hand-to-hand combat, it is super important to note that swinging weapons feels good. Weapons handle in their own unique ways, and the game rewards paying close attention to the other players and the surroundings.

There are a lot of mechanics to keep track of. Players can swing their weapon, block, parry and riposte, kick, throw, and I’m sure I’m forgetting things even now. Knowing when to use what is the goal of practicing — do you thrust your sword now or wait and take a bigger swing? Is your spacing correct to make that maneuver you were planning? One chooses a class when entering battle which dictates the weapon and armor they bring to the fray. The default classes are varied and give the player a great selection of different roles to choose from. It’s also possible to create a brand new class, complete with weapons, armor, and perks. Doing all of this costs gold which can be earned at a respectable rate just from playing the game.

It’s exciting to find efficient and unique combos that create different playstyles. For example, I have a class that uses a Lute as its primary weapon and a rock as its secondary. I just run around playing music and throwing rocks at people. It’s the best. And really, this is where Mordhau shines: making every match your own. What do you consider to be “fun?” Whatever it is, there is a way to achieve it in Mordhau. So many different playstyles can be utilized — not efficiently, but really, who cares?

After a lengthy, but rather informative tutorial, it’s easy to quickly forget literally everything and head into one of three game modes: Horde, Battle Royale, or Frontline. Horde mode has everyone working cooperatively to fend off waves of AI enemies and it is easily the worst mode. Battle Royale is a 64 player melee bloodbath, while Frontline pits two teams against each other with objectives and limited respawns.

Horde mode is 100% cheesy; the tactics used to win as the rounds get harder simply involve exploiting the braindead AI and whittling them down. For example, the longest game I’ve had involved everyone hiding in one of the tents that the enemy units can’t seem to get into. So the enemies just walk towards this tent opening and we all just poked them with longswords until they all died. Then later, when that wasn’t enough, we all just stood on a roof and shot crossbows to slowly whittle down the health of the bigger and badder enemies.

Trying any decent tactic often resulted in a quick death, especially since everyone else was doing what they could the cheese the AI. In fact, as I write this, I’m spectating my teammates in Horde mode just pelt the enemy AI with crossbow bolts. Every map seems to have it’s best cheese strategy, and success is just a matter of knowing where it is. It’s a snoozefest. Then again, my partner literally just typed “killing AI is fun lol” so whatever floats your boat.

Battle Royale is exactly what you would expect: 64 players are dropped into a map with nothing, and the journey consists of finding whatever loot is around and making the best of it. It works simply because the mechanics of fighting are so interesting, so taking that into a Battle Royale mode, where many fights are one-on-ones, plays super well. It won’t make a believer out of those who detest the genre, but it’s a great addition for anyone who does.

Frontline tasks two teams of players with capturing objectives and eliminating opponents until their reinforcements dwindle to zero. For those who have played games like Battlefront, the structure is familiar. This tends to be the go-to mode as it is the most organized and feels well fleshed out. Since it’s team-based, there is no real pressure to perform perfectly and it’s easy to notice improvement, even if it takes many rounds of nothing but death. 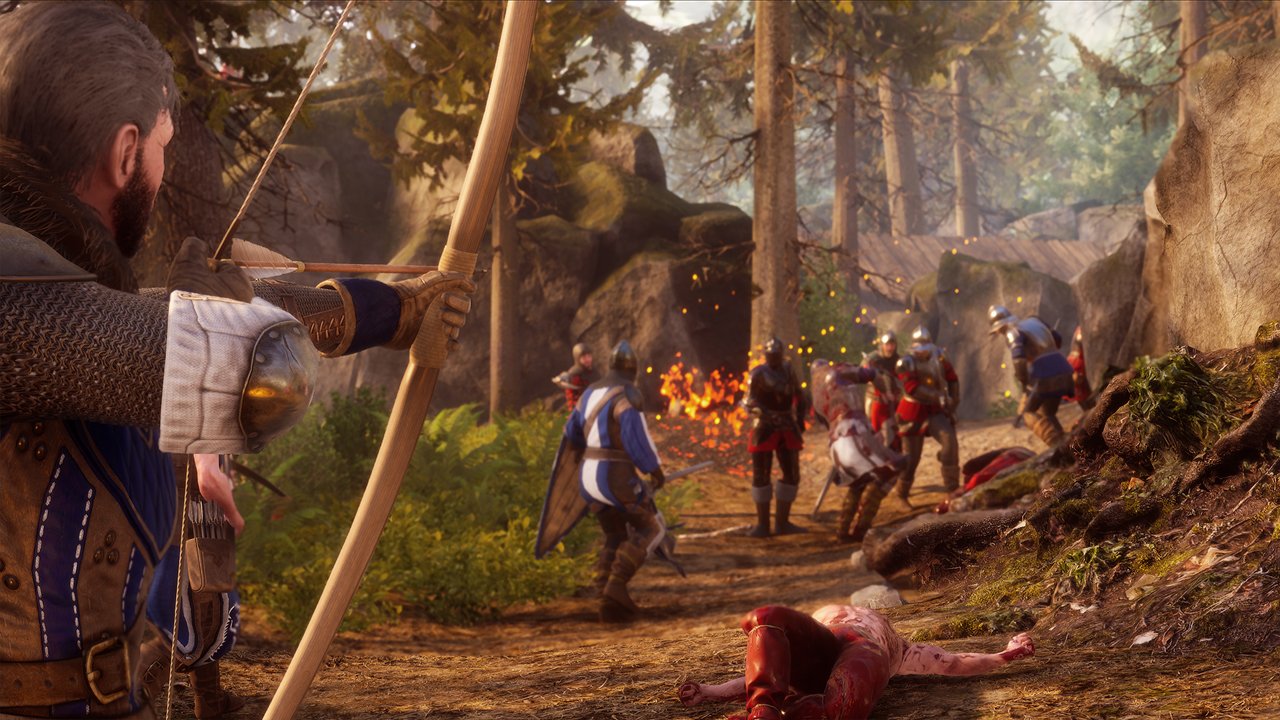 Of all of these modes, Battle Royale is the only one that, generally, allows the mechanics to shine as much as they should. Horde is about taking advantage of the AI systems and Frontline gives very few mano a mano opportunities and generally involves some third (and fourth) parties interfering with battles. Mordhau truly shines when players fight in a one-on-one scenario, but the game modes almost never promote that. There are custom servers that allow people to duel, which is a great experience and I highly recommend seeking those out.

There have been some issues getting in to servers, especially with friends. Often times I will party with a friend or two, and only one of us will be able to join a server since it fills up to max before we’re all in. The load times into a server can be pretty long (even on an SSD), and sometimes the server fills up during that loading time. The game can also stutter or crash, even on menus, though I’ve only had one crash in my time with the game so far.

In the end, Mordhau is a goofy yet realistic medieval combat game that caters to a ton of different players. Many will grind games in order to best perfect their skills with their favorite weapon. Then there’s me, who literally runs around the battlefield playing a musical instrument that adds absolutely zero gameplay value to the team. That’s the beauty of Mordhau — the individual moments tend to outweigh any of the design flaws or technical glitches that are present.

Now if you’ll excuse me, I have a battlefield to fill with music.