Animaniacs was all trios and duos (and one solo sexy rat thing) playing off each other for comedy and I couldn’t help but think of the Buttons and Mindy skits while playing MonsterBag. Mindy would toddle off into harm’s way, faithful hound Buttons would follow and keep her safe at great personal cost in what was one of the more slapstick, smackdog skits. Poor pup.

MonsterBag has a similar setup. A much less irritating Nia forgets her adorable blue monster backpack on her way to school and the bag, apparently named V, tries to stealthily reunite with Nia in the face of a human populace that enjoys killing V in a variety of ways. Smashed between suitcases, death by laser, somber ingestion. MonsterBag is as violent as it is cute. 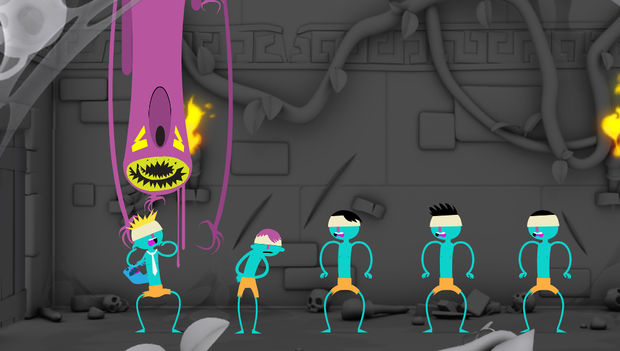 Suitably impressed with the trailer’s art style, I was still a bit sure how the game actually worked until I played it. Levels are set up with a line of folks to jump between. Reaching Nia, always at the end, is the goal. Tapping left or right flits you across bystanders one at a time, but some are a bit more attentive, requiring you to pause and wait until they aren’t looking your way.

A series of unfortunate events en route to some kind of alien apocalypse in a narrative escalation reminiscent of Tales from Space: Mutant Blobs Attack means you never quite reach Nia, even when you get to the end of levels.

Complicating things beyond increasing sets of hungry eyes per level are certain puzzle elements that make use of V’s telekinesis. Various items in the stages can be tapped on if you’re in range and then thrown at the NPCs. This starts off innocently enough by fulfilling the character’s desire as indicated by little thought bubbles. The angry old man who won’t let you pass becomes amicable if you chuck something at the guitarist, causing the latter to throw his axe to the old man, who then shreds and chills out.

Soon, though, you’re sending spears through people, exposing their internal organs as further items with which to progress. Or beheading scientists to pass retina scans. Levels have a flow of, “get to the first accessible item without being caught, use it on an NPC, then get to whatever item that might’ve opened up.” Only once did I find myself screwing up the combination that I had to restart a level, reaching an impasse without any interactable elements left.

The difficulty, then, comes as more and more enemies are out to get you, which slows your progress as you have to wait for them to avert their gaze to get to one side of the level and often have to then make it back to the start. It can get a bit grating on wider levels, especially when enemies’ — in particular, the later alien monster things — patterns sync up and you find yourself waiting longer and longer for smaller openings. Getting seen means instant death and regression to a checkpoint, which I occasionally wished were more frequent.

Spicing up the puzzling elements are sections where speed is a necessity and those were the most frustrating, not helped by some additional, finicky uses of the Vita touch screen to rotate bits and pull levers. Requiring speed when the distance between two points of character-cover is so heavily watched meant I tried to force more openings with barely-desynced enemy vision patterns, which led to a lot of frustrating deaths.

Later levels also introduce more abstract, more complex button-pushing puzzle elements that feel thematically distant and get away from the charming, cobbled together cause-and-effect puzzles that I enjoyed, like tossing lemonade on a thirsty girl or throwing an alien’s flaming head to melt down a bigger alien.

MonsterBag is a nice bit of light puzzles and charming slapstick, at least until the narrative drives it towards something more serious and mechanical that ups complexity and challenge, but almost feels like a different, less personable game. That backpack is one of the cutest characters in recent memory, though, thanks to its infectious grin and happy hiss, murderous tendencies be damned.