Too often, unique and engaging games are passed over due to their risqué content and gimmickry, and Monster Monpiece is inevitably one that will fall victim to this curse.

It’s not difficult to see why some may be turned off by it, though — despite the fact that it’s a strategic card battler, it’s also rife with many of the same tropes that will turn members of even its target audience off: like “rubbing” illustrations that happen to resemble young women and engaging in adult situations. But beneath the trappings of a fluffy “adult” game is a challenging and entertaining card game that’s quite fun.

And believe it or not, that’s actually the main attraction. 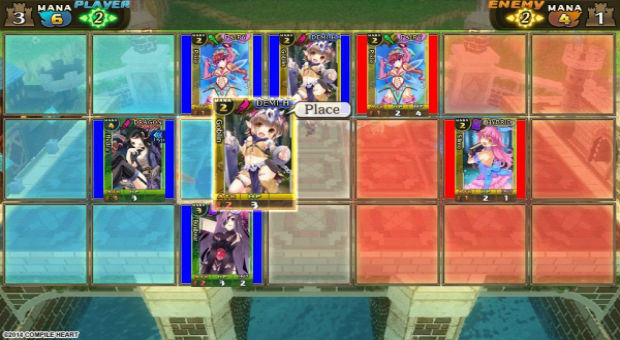 Monster Monpiece is set in the magical world of Yafaniel, where there’s a large dearth of male inhabitants. Human women befriend and train Monster Girls, which is where the card battles come in. Young May is a human who’s trying to reach the rank her mother did as a powerful monster trainer, but on her journey to become one her friend Elza becomes one of the “Lost.” With Elza having succumbed to what’s essentially zombification, May has to find a way to cure her before she takes control of the world’s Magus Quartzes. While it’s not exactly too original of a narrative, it sets a nice tone for the rest of the game, which definitely won’t be what many are expecting.

Card battles are the heart of the affair, with players collecting hundreds of cards depicting hyper-sexualized versions of mythical creatures like minotaurs. Once you’ve settled on a deck, you’ll use it to send chibi versions of the monster girls to duke it out for supremacy. Battles play out on a 7×3 grid, where the player begins on the left side of the screen and advances toward the opponent on the right. Reaching your opponent’s stronghold is the name of the game, which is done so by playing cards each turn in order to summon monster girls and take out your enemy’s defenses.

When you place your card, your monster girl will begin rampaging toward the baddies with reckless abandon and attack automatically for the damage number on her card. This leads to inevitable strategic snafus during battle, as no one monster has the ability to carry the rest of her team to face off against an entire deck.

You’ve got typical types such as Melee or Healer, which will aid in your cause tremendously. Place a healer card behind a melee attacker to recover a negligible amount of health each round, or opt to use a card to strengthen the allies in the immediate vicinity. There are also several different species of cards, which lend bonuses and additional combat boosts depending on which you put into play. For instance, each card has its own particular “aura,” which comes in four different colors. Put down two cards with the same color in a row and you’ll receive a bonus, same as if you can manage to play three in a row. It’s the little things that count. 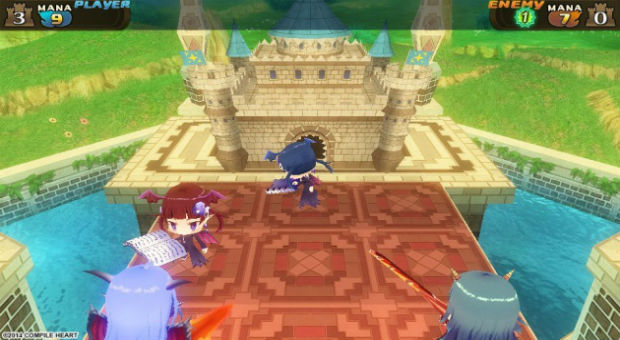 Some cards come packing their own special sort of bonus, denoted by a marking on the card. These monster girls are good to go with additional buffs that you’ll want to make use of every single time they come up in your deck. These buffs may be additional health points, another turn in battle, or they may bolster the damage done per turn. No matter the case, they’re extremely useful and can turn the tide of battle in many ways.

Unfortunately, while battles are rewarding and scratch that itch for strategic card placement, there do tend to be entirely too many of them. It’s not Skies of Arcadia-level bonkers as far as encounters go, but it can be extremely frustrating, especially if you haven’t quite gotten the hang of how best to create decks to combat an onslaught of enemies. And even for those with an abundance of combat prowess, it’s never fun to be thrust into battle every five minutes. 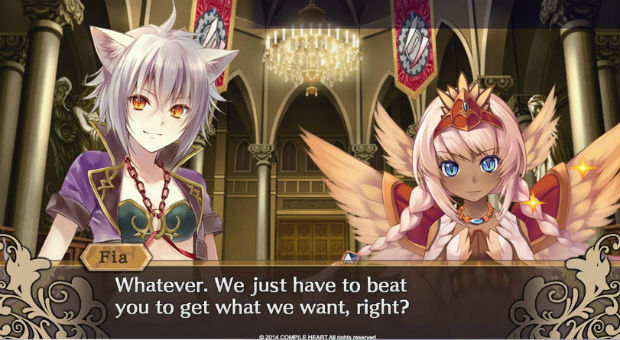 Outside of battle, the game progresses in a fairly linear fashion where you’re exploring a specific map that you can receive money and other spoils from. Until the end of the chapter most of your time is spent in card battles or purchasing new cards and items. It’s all fairly simple stuff, things that you would see in any role-playing game, except for one thing.

The First Crush Rub minigame has become synonymous with Monster Monpiece, a mode where you “rub” your touch screen until a gauge on-screen reaches the top. You must find the girls’ weak spots, rub, pinch, and touch there, until you reach “Extreme Love Mode.” You then use the front and rear touch pads to push your girl over the limit. It might be better played in the private confines of your home, but it’s a minigame that does help you out in the long run, powering up cards and altering base stats so that you’re better prepared for your next battle. It’s not a huge deal, but be prepared to face it if you’re going to be playing around anyone. I won’t pretend that it’s anything other than sexual, but we’re all adults here. Rub away. Turn down the sound if it bothers you, and power up those cards. You’ll be glad that you did later. 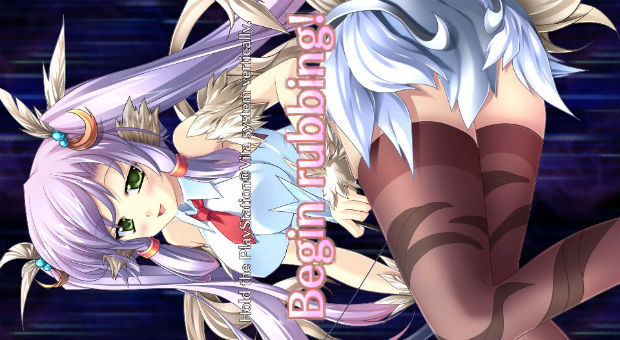 In all, Monster Monpiece looks and feels great, and I found myself spending hours on it when I should have stopped long ago to attend to more pressing matters — something I never expected to happen with such an out-there premise. It simply shouldn’t be taken at face value because the cards are “too sexy” or because there happens to be an overtly sexual minigame in which you rub your Vita’s front and rear panels, which is actually completely optional.

It’s an excellent addition to the niche library that has made its home on the Vita, and for $29.99, it’s an intriguing card battler you won’t find anywhere else. Ignore the taboos and give it a shot, especially if you’re looking for something a little different than a dungeon crawler or traditional role-playing game. It’ll thrill you, chill you, and fulfill you, creature of the night.