Stop me if you’ve heard this one. A young boy must journey through an oppressive greyscale world, navigating through deadly traps, manipulating objects in order to solve physics-based platforming puzzles, all while delivering a wordless narrative to the player. Indeed, Monochroma shares a few characteristics with the acclaimed title LIMBO, and the two have been compared extensively, but it exists very much as its own entity as well.

For one, Monochroma tells a tale of a robot-producing corporation that is probably hiding its more sinister motives. For two, it uses splashes of color in addition to the greyscale palette to highlight elements and add a bit of visual interest. For three, it suffers from poor control and mundane puzzle design that mar the whole experience. 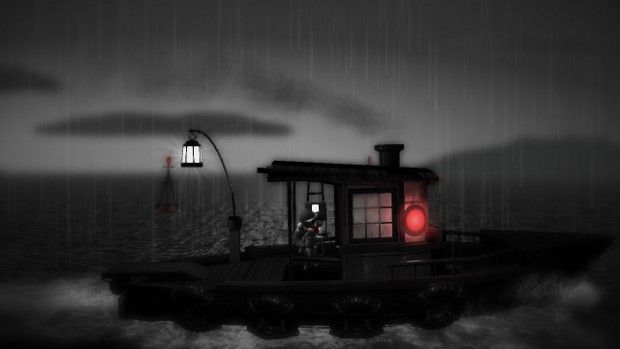 Monochroma begins with the scarved protagonist out with his little brother in the countryside, where the little brother breaks his leg in an accident, rendering him utterly useless and setting up for the main puzzle mechanic. The player must carry the injured sibling through their journey, but the protagonist suffers from reduced speed and jump height while towing him around.

Additionally, the player can drop the little brother to forge ahead a bit, but only in designated lit locations. What results is often a juggling act that has the player dropping the brother in the light, making a high jump, hitting a switch or otherwise providing a path, then returning to pick him up. There are a handful of more interesting puzzles later on that do not just boil down to this, but they are sparse.

What makes some of the puzzles frustrating is the little brother’s complete lack of self-preservation instinct. He will sit still while a giant crane is slowly descending to crush him to death, or ride a conveyer belt on a path leading to his grinding demise. I found myself relishing the section in which I was free from the little brother, though that may have been the opposite of what the narrative intended. Even without him around, the player character also suffers from one-hit kills, and the time it takes to get back into the game after a failure is just long enough to be exasperating.

Worse still is that half of the time, death comes as a result of the loose control rather than intellectual failure. Jumping never feels as responsive as it should for a game that centers around it, and grabbing ledges is a hit-or-miss affair. There is a section near the beginning in which I was convinced I was missing some important puzzle element, but it turned out that I just was not grabbing a ledge that I should have been easily able to.

The poor control also highlights another failing in Monochroma. The puzzle areas are separated by exploration, and occasionally by chase sequences. However, due to the slow speed and spotty jumping, these sequences are more dull than anything else. Rather than providing a change of pace, they only serve as unexciting interludes between puzzles.

The final boss fight also tends toward the action side of it, though there is a minor puzzle element to it. With one-hit kills, no mid-fight checkpoints, sluggish controls, and an introduction that lasts too long after the first run, it can be an exercise in frustration. All the while during what is meant to be an intense climactic scene, a bafflingly soothing steel drum track plays. In short, its major problem is that it does not play to the game’s strengths. 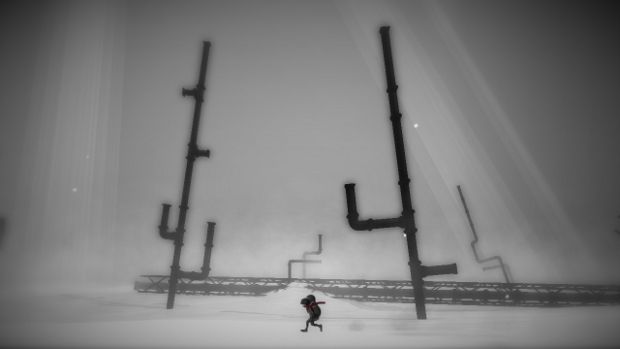 That said, Monochroma does have strengths. Its art direction and sound design are superb (boss fight music notwithstanding). They work to tell the story of the world wonderfully, with few written words. The bright reds on top of the monochrome environments serve to highlight objects that are important to either the story or the current puzzle.

The narrative itself is generally engaging overall, but it suffers from a few holes. Aside from being told that the little brother is in fact the protagonist’s little brother, the player is given no intrinsic reason to want to help him, and in fact, the player can grow to resent the character. Otherwise, there is not a good reason given that the two brothers decide to walk to the city and infiltrate a corporation instead of staying home and calling for medical help.

In the end, it is difficult to recommend Monochroma. Despite its impressive audiovisual presentation, it fails in the areas that make a game a game. It is beautiful in its own dismal way, and the story it tells is decent, but I could not wait for it to end so I would not have to deal with the frustrating control and dull design decisions.