Born on third thinking it hit a triple

The Giants have won and lost back to back one-run ballgames to open the 2015 baseball season. They lost a starting pitcher and right fielder to the DL, scratched a first baseman and another starter with injury, called up a rookie to eventually take the series.

At nearly 42, Bartolo Colon, whose belly jiggles like flan in an earthquake and whose helmet routinely flies off while he is batting, was the opening day starter for the Mets. Half of the Arizona Diamondbacks look like Earthworm Jim. Mat Latos has a 94.50 ERA. Did you see Puig throw from foul right to third? Cubs fans have been pissing in beer cups (called “making Coors Light”) at Wrigley Field because the bathroom lines are too long.

Baseball, sport, humanity. These things are interesting because they are our stories. The same stories we’ve always had, with different details, made newly interesting. The problem with MLB 15 The Show as a routinely well-made baseball simulation is that routine dulls. We want to see the dropped routine fly ball, the overthrown routine intentional walk. Not a fucking properly modeled Nike® Air Max MVP Elite 2 Speed +4 cleat buyable for 600 Stubs. 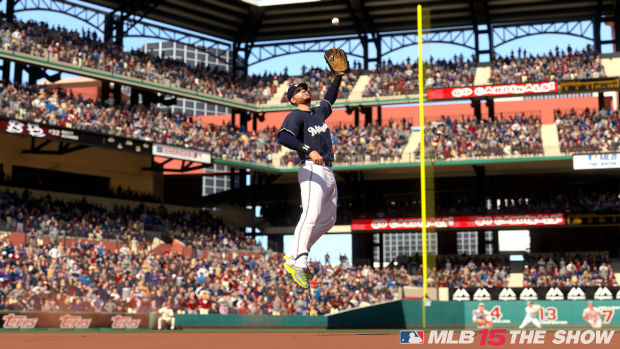 I don’t think there are baseball fans who care about what brand of jockstrap players are wearing (just its inability to fully conceal Josh Reddick’s testicles). I didn’t, anyways, but now I am doubting myself. Someone who makes big money decisions on a big money release thinks there are and probably paid these brands big money. And yet the giant Coke bottle slide sticking out of left field at AT&T Park reads “Enjoy Cola,” like when an anime flips the McDonalds logo upside down.

When one of your biggest new selling points — it’s right under “gameplay improvements” in its own “new features” list — is that I am being advertised to, it suggests a lack of ambition. But maybe players do want to crawl through inventory screens to equip a Rawlings® Adirondack® Ash bat that features “great performance wood, professional profile, and great value.” But I still play catch with a mitt I found in a park 20 years ago because I like it better than any of the others I’ve had. So maybe I’m old-fashioned.

Still, that you’d have to periodically unlock these things, or buy them with in-game currency (which you can buy with real world, rent-paying currency) rather than have them thrown at you by these companies who’d like famous athletes to rep their brands doesn’t follow the “striving for authenticity” excuse.

The Show has leaned into its effective MLB monopoly like its going for the hit by pitch and some of it is worthwhile. I do enjoy the virtual tourism of visiting new stadiums, or even being back in downtown San Francisco mainstay AT&T Park without forking over the cash. I’d take a Candlestick memorial, too, winds and all.

But MLB The Show has many little, longstanding problems hurting its tone, gameplay, and even its authenticity than the now fixed lack of pages and pages of adverts. Take the lack of any corporeal collision physics that sees uncanny replays where players phase through one another or, if in uninterruptible animation, as if they are necking action figures or a cheap electronic football toy. Without it, how do you simulate a 12th inning playoff collision between outfielders? There’s the only somewhat improved squirreliness of wondering whether your fielder will do an electric slide out from underneath a dropping pop fly. The in-game commentary that is only there to be turned off, maybe?

Instead, a new “directional hitting interface” is trumpeted as fresh. You can pair it with timing and analog swings in the options, using the left stick to aim your hits (rather than as the plate coverage indicator). Except this only adds visual feedback and a few new directions to what The Show has always told me I could do, press up to induce flyballs, down for grounders. Meanwhile, analog hitting has been reduced, as you no longer pull back on the analog stick to stride, just flick forward to hit.

Mostly things are intact and the on-field baseball simulation is as satisfying as last year. The game pushes Diamond Dynasty hard in an attempt to make EA-type money with people buying card packs to field an ultimate team. However, my risible satisfaction at naming a team the “San Francisco Existentialists” (after deciding against “Lizzards,” the spelling of which always confuses me) and the angelic, plain white pajamas your team starts out with were short-lived novelties to me. I’ve never had the means or desire to be a collector, though. 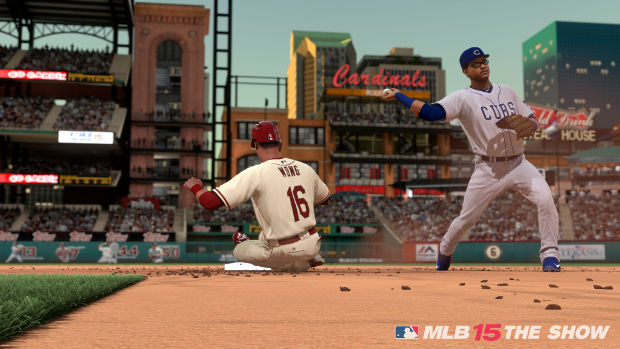 Online play felt somewhat smoother in limited goes, but I’m on a different (real good) internet connection this year, too. Others have reported the same old problems. The PS4 version’s horrendous load times from last year are reduced to just a nuisance, at least, even with a hefty install.

It was particularly trying in my new Road to the Show (I couldn’t be bothered to upload my PS3’s file to the cloud and then import on my PS4) trek through the minor leagues as an under appreciated starting pitcher. This was partly my fault as the slow moving Dynamic Difficulty, one of the great sports game fallbacks as far as new features go, gave my 22-year-old rookie a near-0 ERA.

I ended up starting quickly in AAA, where my manager would routinely leave me hurling with a pitch count around 120. After a few of these, with one out to go in the 9th inning of a shutout, my player (a rare #69) fractured his arm. When I was healthy, the manager refused to start me, instead starting a bullpen guy and always inserting me in the second or third inning, from which point I’d usually finish out the game anyways, while in the “Interactions” screen he’s tell me I wasn’t ready for a starting role.

In the bigs, I’d go from starter to an even longer bullpen stint post-injury, which made for a hell of a lot of loading and unnecessary screens between games worth one inning of work. I was also awarded a perfect game for leaving with elbow soreness having made one out in the first, which is when the Nationals were even more adamant about using a bullpen platoon as a fifth starter rather than a starting pitcher with an actual 0 ERA.

The discounted PS3 and Vita versions might be more dollar valuable as more transparent roster updates, provided you don’t mind the technical limitations. MLB 15 The Show is still good by virtue of the systems laid down over the last decade, but it has no ambition. Produced on third base thinking it hit a triple, it wouldn’t even bother running in a sac fly.