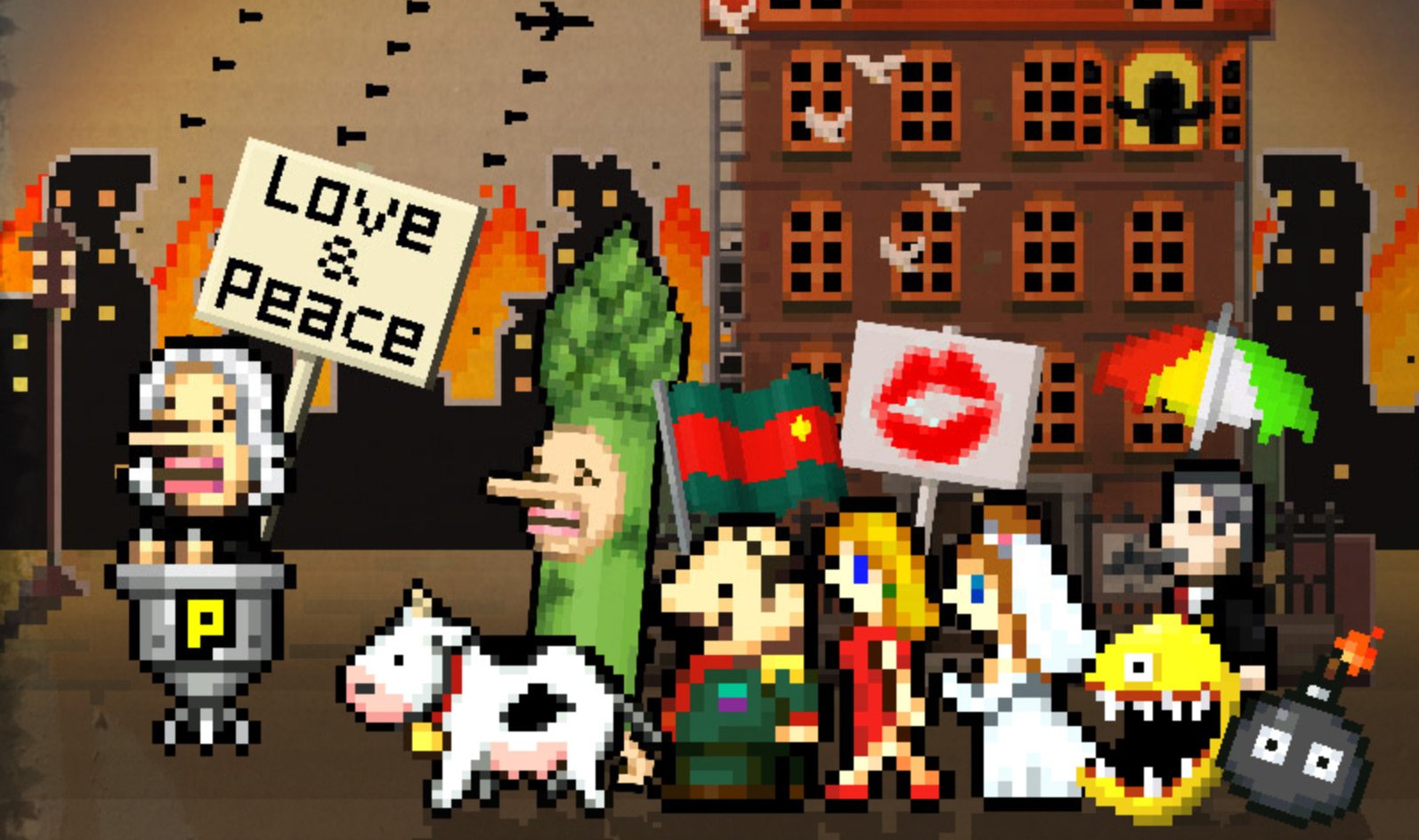 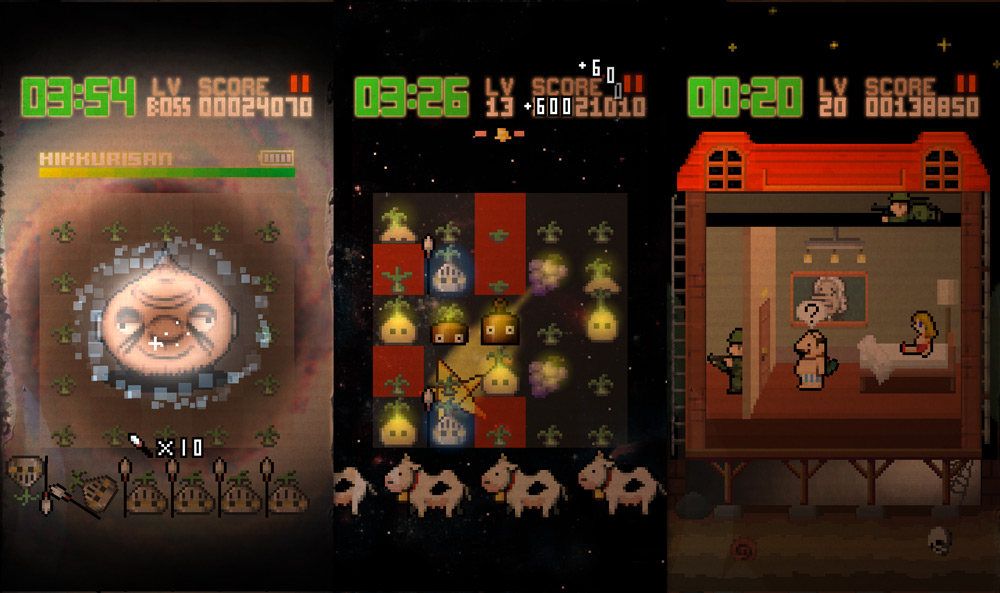 It can look chaotic and nonsensical in trailers and screenshots, but buried beneath Million Onion Hotel’s stupefying presentation is an easy-to-follow concept. It’s puzzle game meets whack-a-mole. When an onion or anything else pops up on the 5×5 grid, I tap it to claim the spot. Claim five spots in a horizontal, vertical, or diagonal row and I clear the board. Manage two or three rows at once and I unlock a fever mode filled with fruit, hearts, and characters to rescue that flood my score with those sweet, sweet zeroes.

High score is king here and time is my only enemy. Run out and it’s game over. I add time to the clock with each row I clear, but there are plenty of enemies and bosses that will whittle away those seconds with ease. At the beginning of each run, it’s important to clear single rows as quickly as possible to build up the clock. When I have a comfortable pillow of time to work with, I start going for those double and triple rows.

As I advance through the levels, the onion patch gives way to asparagus that take several hits to knock out, rolling smiley faces that can be tough to tap right where I need them, patrons at the hotel throwing shit onto my puzzle board that I have to reflect with an umbrella, giant onions, brooms, and more. The further I go into the game, the more hectic my thumb movements become and I start feeling like those expert Dance Dance Revolution players that move their legs at lightning speed and won’t fucking give up the machine no matter how many kids are waiting in line to play.

Boss battles are where the game can be a bit too frenzied for its own good. These fights against ducks, fish, giant metal onions, and more just eat away at my time. I have so far only lost during boss battles. Each creature has a set attack pattern and an easily identifiable opening for damage. Onion knights collected through my journey and during the boss battles can be flung at the creatures during these moments of weakness, racking up the hit points. When I run out of those, I’m just flinging as many onions as I can at it, continuing to make rows and collect time bonuses so I don’t fail. There is no instant time bonus for beating a boss, which can be frustrating. 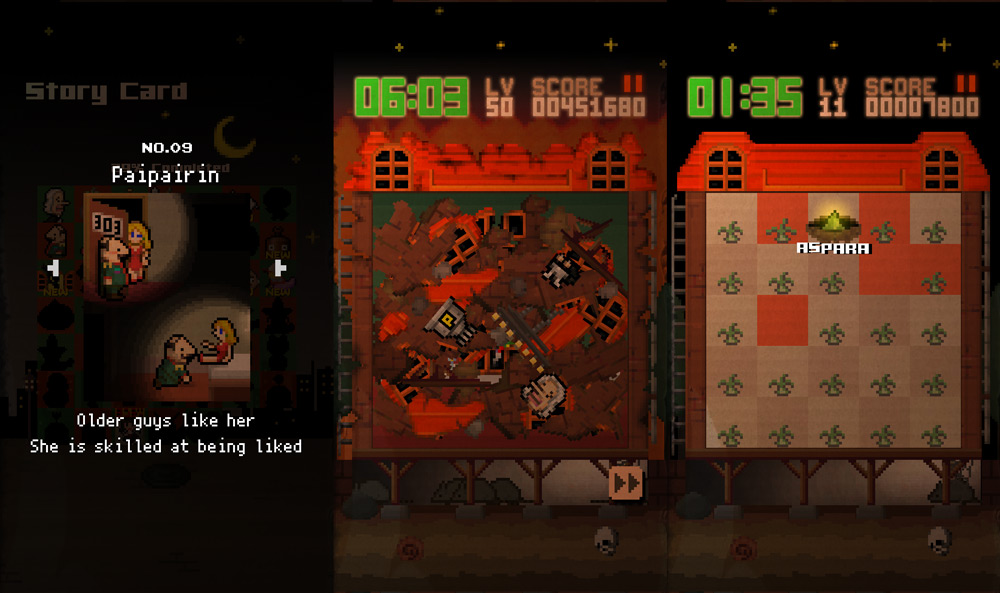 The gameplay is just perfect for mobile. Touch controls work wonderfully and the music and sound effects are amiable. Hearing the little hum from each onion as I tap it is a simple joy. The pixel art is quite lovely but often too dark for its own good, like trying to read a menu at a restaurant that doesn’t list its prices. A dim presentation can be nice in small doses but there are times where I adjust the brightness on my phone to keep playing, something I have only done for this app. There can also be very brief instances of slowdown — on my phone at least — when too damn much is happening on screen at one time.

None of these quibbles detract from how enjoyable I find Million Onion Hotel. Gunning for a high score keeps me interested, but it’s the batshit insane story has me restarting non-stop after every game over. The prologue can be found on app store pages and in various story cards I collect through each run. They reveal a little about Doctor Peace and his strange hotel, located in Hennokokora, a continent currently in the midst of a war. It’s all cute and appropriately charming.

The main storyline, told through vignettes featuring soup, sex, guns, the mob, and enough pixelated nudity to make Custer’s Revenge blush, is so off the wall that I laugh in disbelief. Did I really just see that? I sit at my desk continually pushing myself to do better and better and better so I can see just what happens next. Level 50 isn’t enough. 500,000 points aren’t enough. I must do more.

Only the best players will see the story through to the end outside of just watching a Let’s Play. Every run of the game starts from square one and goes from there. I set a new personal best with each run, inching closer and closer to an eight-figure score.

Million Onion Hotel is another winner from Onion Games and Yoshiro Kimura. It’s fascinating, freakish, and further proof invigorating games can be found on mobile platforms if you just know where to look.

[This review is based on a retail build of the game purchased by the reviewer from Google Play.]