I believe that WayForward is in the same position that Nintendo finds itself with every new console. All these other developers look at their dev kits and throw their hands in the air in confusion, so Nintendo has to ever so gently go, “This is how you make videogames, guys.” Similarly, WayForward has become the company that’s leading the software charge on Nintendo’s portable digital stores.

Have any of you actually purchased an original eShop title — not Virtual Console or DSiWare — since the service’s launch? I’m guessing a lot of you were waiting for Mighty Switch Force as I have been. While that has meant that other solid games may have flown under my radar — I’ve heard good things about Pushmo, for instance — I have the most faith in WayForward to deliver the experience I’ve been craving. That’s because WayForward continually demonstrates a commitment to fun, polish, and atmosphere.

Besides, in what other game on the 3DS will you find robots, hot tubs, 90s-style dance jams, neurotic checkpoint dogs, and an all-blonde car wash squad? 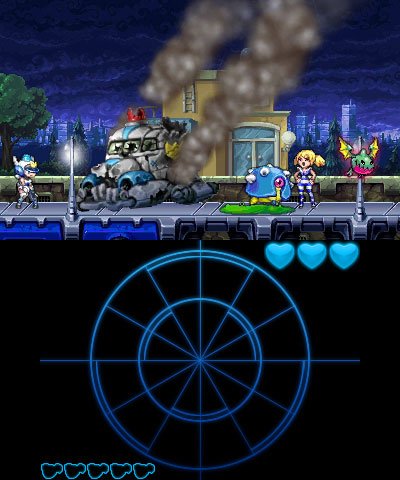 Mighty Switch Force is the third in the Mighty series after Mighty Flip Champs and Mighty Milky Way. In the past, is has been described as Metroid-like in gameplay, but that’s not accurate at all. The only Metroid reference I could find was the heroine Patricia Wagon’s death animation, in which her armor falls off as she explodes in a bright light not unlike Samus in Super Metroid.

This game actually reminds me of Mischief Makers more than anything else. Both are puzzle platformers starring gynoid protagonists, require manipulation of blocks strewn about the level (Clancer blocks in Mischief, switch blocks in Mighty) to reach the goal in satisfactory time, and mix a healthy amount of action in with the puzzle-solving. Even one of Patricia’s spoken lines (“Justice served!”) is reminiscent of a similar line in Mischief.

I’ve mentioned this before, but more than pretty much any other developer, WayForward truly cares about creating loveable, memorable female characters. They are at times adorable and playful, other times hardcore and cool, and still other times sexy and dangerous — they are never just one thing. And despite a little bit of cheesecake, like the car wash scene in the header, it never feels like the girls are being exploited like they would be in, say, Senran Kagura. The art is so simple and pleasant that at worst you’ll just chuckle and say, “Oh, those wily scamps are at it again!” 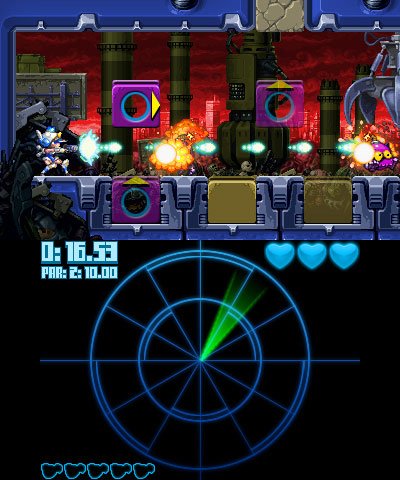 So, who are the bubbly starlets of Mighty Switch Force? I’ve briefly mentioned Patricia, the space robocop armed with a pea shooter and a siren on her helmet. Her mission is apprehend the criminal family known as the Hooligan Sisters, who are basically the Beagle Boys from DuckTales if the Beagle Boys were female and not butt-ugly.

To clear a level, you must find all five Sisters hidden throughout the stage. Though the Sisters’ robot minions attempt to slow you down, your true enemies are the switch blocks. By activating your siren, blocks that are recessed move to foreground and vice versa. Crossing spike pits often involves switching the blocks in mid-jump so that you can land on a solid platform. As you progress, you discover new blocks, such as ones that launch you or an enemy like a cannon or others that lock in place as long as you remain standing upon them.

The 3D functionality is most effective in helping to distinguish which blocks are recessed, typically indicated by a slight level of transparency compared to foreground blocks. Unfortunately, the 3D spoils everything else. Polygon-based games benefit the most from added visual depth, whereas sprite-based games tend to look like cardboard cutouts arranged on separate planes. This isn’t much of an issue in games with simpler sprites, such as the 3D Classics lines. However, the sprites in Mighty Switch Force are so rich in detail that they don’t feel like “flat” objects at all. Turn on the 3D and that illusion is shattered. It’s the same disconnect I felt on the N64 when I noticed the trees and bushes were paper-thin. 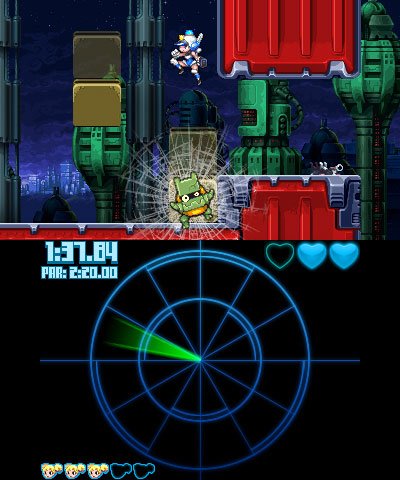 You might feel differently than I do. As for me, I’d much rather fully enjoy the phenomenal sprite work, adorable sound bites, and incredible Jake Kaufman-composed soundtrack than have to worry about how far in the distance the city skyline is. The game is packed to brim with so much panache that, even though the enemies and scenery aren’t all that varied, you never get tired of drinking it all in. You better not get tired, because you’ll be constantly replaying levels in order to clear the par time.

Curiously, there is no “retry” option in the pause menu. If you want to start a level over, you have to exit to the stage select screen and reenter from there. It’s an unfortunate oversight that begins to gnaw away at you if you happen to be a stickler for making that “perfect run.”

Even if you are aiming for the par times, the game is over all too quickly. There are 16 levels in total, a much smaller count than the 41 in each of its predecessors. It’s not as though the individual levels in Switch Force are significantly longer; the game as a whole is also a much simpler romp than the often infuriatingly difficult Milky Way. I’ve been lenient on the short length of the predecessors, but I was hoping that the jump to 3DS would be accompanied by a longer, more robust campaign. WayForward has clearly mastered the “short and sweet” formula, but it’s about time the company gives its fans a massive puzzle platforming extravaganza. 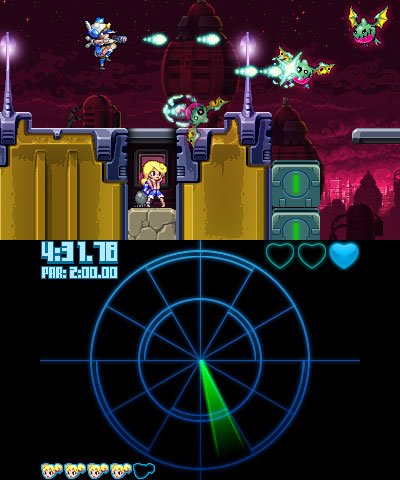 My complaints aside, the game is damn beautiful. It’s a much more lenient game than the previous two, and there are copious checkpoints should you find yourself impaled on a bed of spikes or crushed by a block that you switched while you were still standing in front of it. Even the simple addition of a weapon makes for a livelier, more fun pace.

Mighty Switch Force is the best Mighty installment yet, even if it still feels like a tease. It’s a game of cops and robbers, the sexy future edition, that blends light running-and-gunning with crazy platform manipulation. Once again, WayForward proves that it knows what its doing when it comes to downloadable titles on a Nintendo service. Other developers need to step up their game.